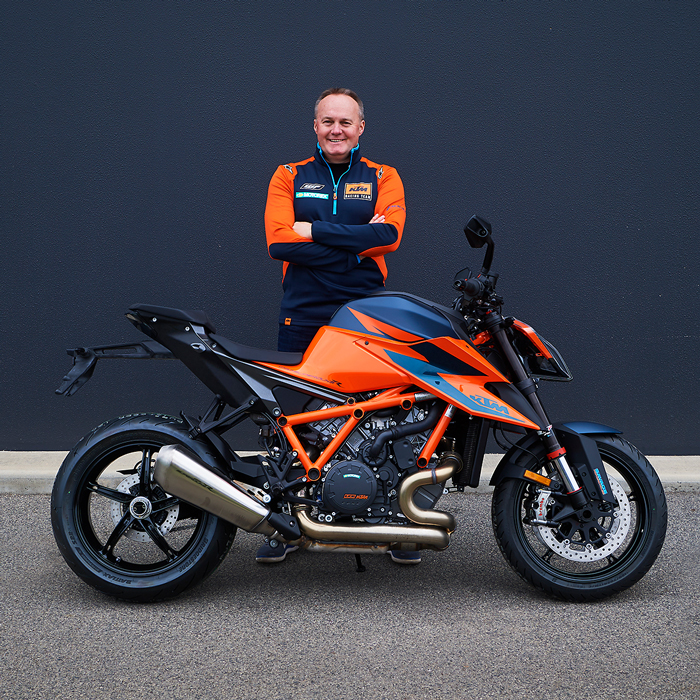 Steve Fraser is your quintessential orange bleeder. Having no less than four KTM bikes in his garage – with an ultra-limited edition KTM 1290 SUPER DUKE RR on order – Steve enters the ULTIMATE DUKE RIDER fray with bucketloads of worldwide riding and life experiences.

Hailing from Perth in Western Australia, photographer Steve Fraser’s résumé reads like an adventure novel. In his own words, Steve has photographed in over 130 countries, cave dived in Tonga, hung out of helicopters in the New Zealand Alps, crossed the Australian desert on a motorbike, done 300 kph down the main straight at Phillip Island, raced mountain bikes in the Canadian Rockies, spoken at TEDx and helped provide clean fresh drinking water to people in remote Africa.

Having started his riding career at the age of eight, Steve honed his skills in the dirt before moving onto riding big street bikes, even lining up at the Police station on his 17th birthday to take his driving test before they opened.

Besides making his annual pilgrimage to the Phillip Island MotoGP track every December to enjoy a few days riding the GP circuit, Steve has also got proper adventure credentials under his belt.

In 2017, Steve rode his KTM 690 ENDURO R around the world, starting his 45,000 km journey in Perth, and finishing in Cape Town, South Africa 9 months later in aid of raising funds and awareness for Water for Africa. Needless to say, that bike has a very special part in his heart and takes prime location in the garage.

So, what does the DUKE mentality mean to Steve?

In a word – Freedom.

“Every day is an opportunity to make a difference, to explore the planet, learn something new, meet incredible people, seek adventure, push the limits of what is capable and never forget to love friends and family – oh and just occasionally it’s a lot of fun to throw a leg over a SUPER DUKE, twist the throttle wide open and feel the adrenalin rush,” says Steve.

We say that’s pretty spot on.