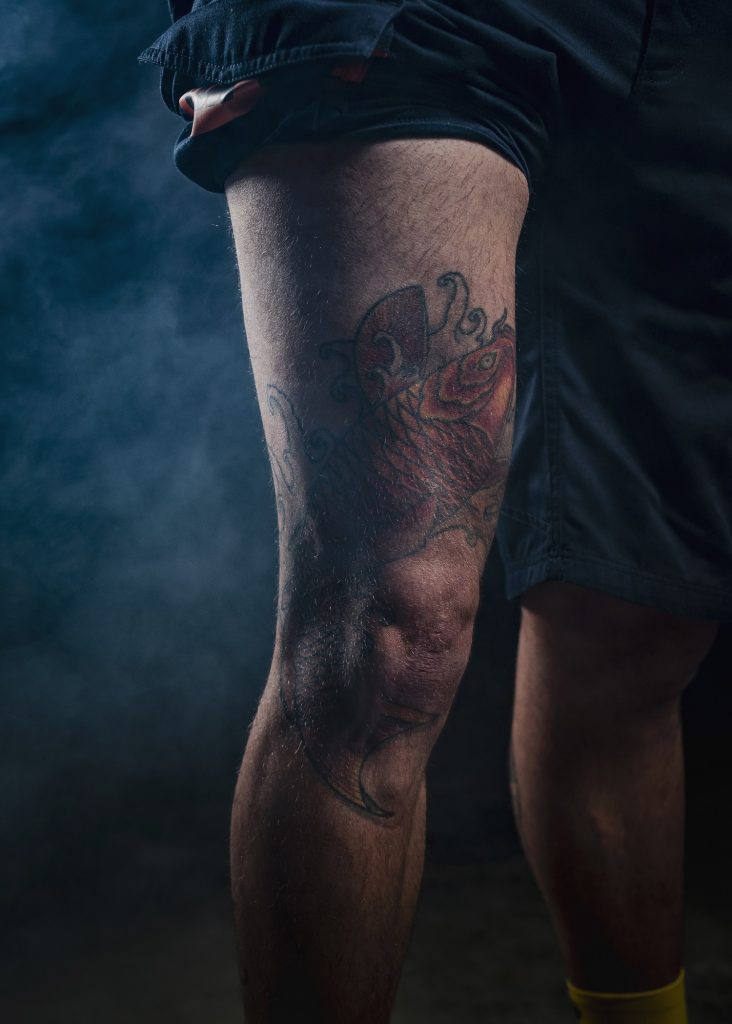 Under the skin of the rally team: Sam Sunderland and Toby Price talking about their ink

Their wins are the result of their riding skills and inner strength. Their scars are a sign that their motivation to win outweighs their fears. Their tattoos are reminders of their teenage rebellions and deepest passions. Their body art is the ultimate proof that pain is nothing to endure when you decide to bleed for love. Translated into words, their ink says Life is fragile, we are not.

Warriors have always used them, long before they became mainstream, to identify themselves, to commemorate loss and mark triumphs. Sam Sunderland and Toby Price have fulfilled the two former things of the tattoo list, while the latter, the ink that would represent their wins, is still on hold. On January 7 they will again put on their armor, and go chasing glory. The number of Dakar trophies to document on their skin is still far from final. 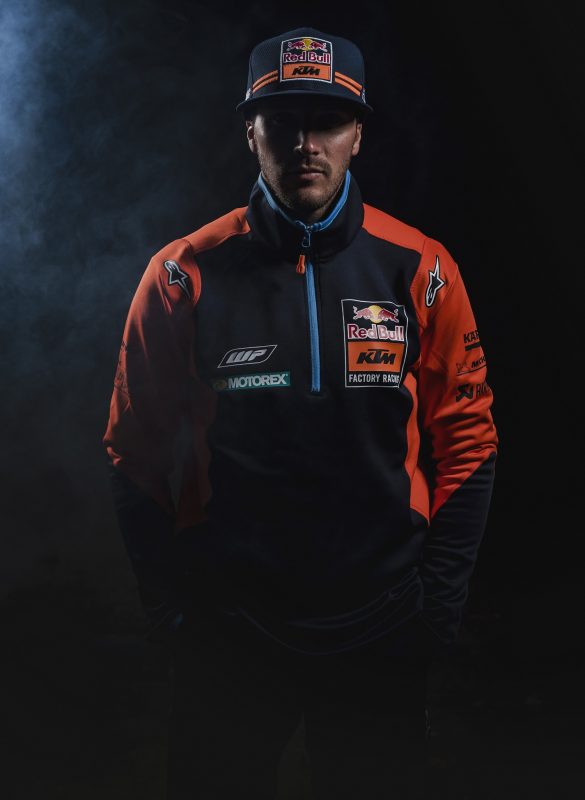 A stupid one to start
Not every tattoo has a story, yet there is a story behind everything. Like many significant things in the life of Sam Sunderland, his love affair with ink began at the edge of Rub’ al Khali desert as well. “I got a stupid one when I was 17,” recalls Sam when asked about his first tattoo. “It seemed like a cool idea at the time, to have my name written on the back of my arm. I went on holiday to Dubai to see my cousins, we were best friends and pretty much the same age, and we got our names translated to Arabic. At the time, people in England would have their names written in Chinese, so to be different we chose Arabic. Actually, it wasn’t that cool because now this thing will be on my arm for the rest of my life. I can’t see it, which is good, and I can say to people that it means something like `Seize the moment` or `Never give up`, which is funny.”

Love, death and sugar skulls
After a couple of years, when the pain was already well forgotten, Sam had another – much more brilliant – idea, and got his second and third tattoo on the backs of his calves. “I’ve always loved sugar skulls. I don’t know why, just have. They are linked to Mexican culture, to the Día de los Muertos celebrations, as a way to honor the deceased. Mine are here for the same reason, to remember my friends who died. One skull is female, one is male, with a mustache, though it doesn’t mean that one is for a girl and one for a boy. If you look closer, there is some interesting stuff inside: bicycles across both the eyes, guns, a sprocket, a spider web, a compass and of course, the flowers,” explains Sam, and adds: “Looking at them now it really seems a bit strange to have two skulls on the back of my calves.” 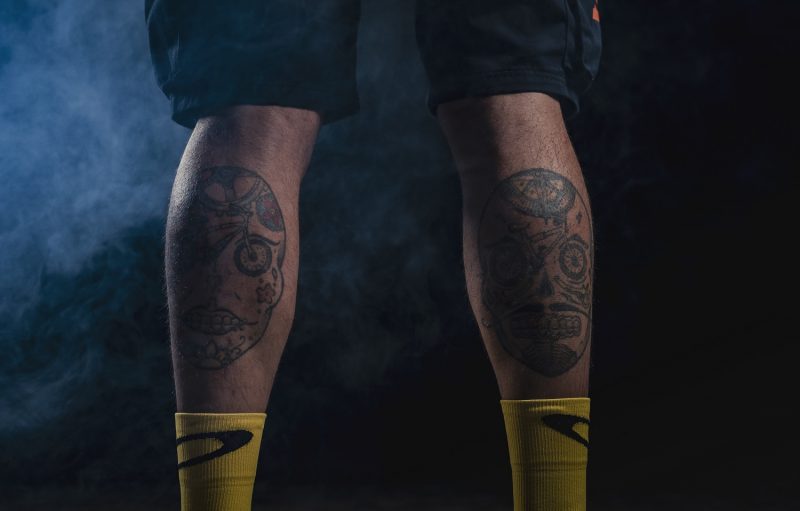 Sharing scars with a koi carp
“For me free-diving is the only time when I can really zone out. My life is pretty chaotic, but under the surface I somehow manage to control my thoughts. I go free diving because I spearfish,” says Sam. The big koi carp tattoo, masterly done in Thailand by a local tattoo artist, tells a story of a big passion. “To be honest, this one is also a bit strange. The reason I wanted it so big is that I wanted it to seem like it’s flowing around my knee. As result of a broken femur the fish now has two big scars,” says the winner of the Dakar 2017, and adds: “The ones on my calf muscles took three hours each, while I had to lie down for six hours for the fish. I don’t know which is harder: a really long day at the Dakar or a painful adventure like this.” 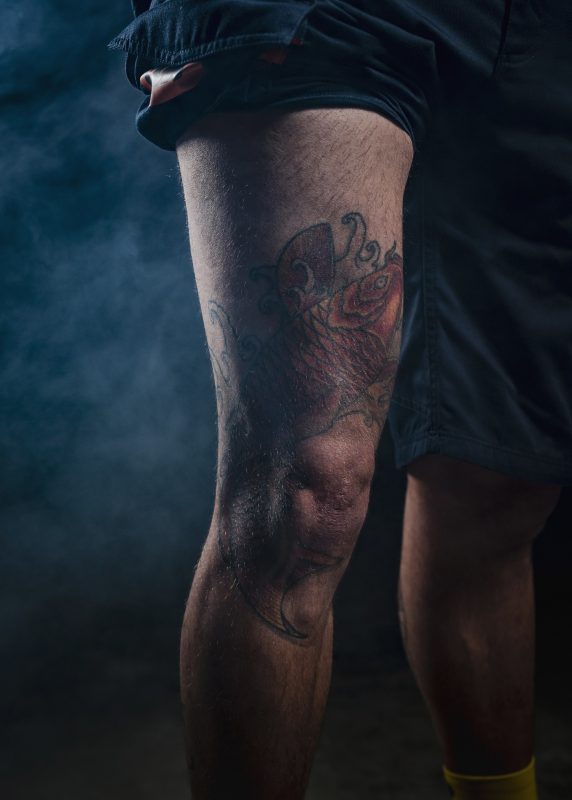 Time to roar
Thinking of his next one, the idea is to get something super delicate, detailed, with fine lines and stuff. In other words: on a warrior’s skin there is always some place for a lion’s head. “I like what the lion represents and I think it just looks bad ass with his mane.” 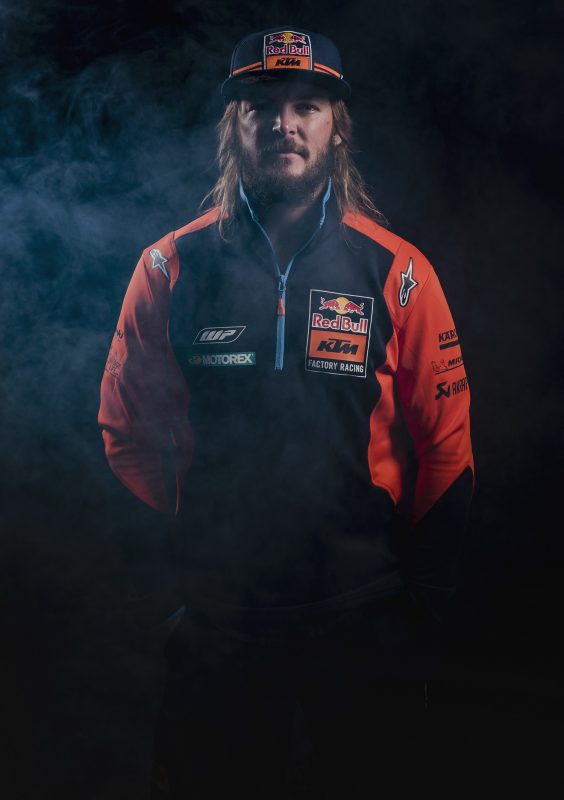 A chubby kid, riding for national titles with number 287
“My first tattoo goes back to when I was 17, about to turn 18. I was racing motocross at that stage and never thought I would change my number. As all motorcycle riders do – they put their motorcycle number somewhere, I decided to do the same, and put number 287 on my lower back. Even now when I don’t run that number any more it still holds significance for what I did in the past,” Toby opens up about his first inked adventure. “87 is the year I was born and basically my riding number, but as a junior, every time I took part in Australian nationals we had to add the first number of our postcode. When you saw number 2 on the plate you knew the kid was representing New South Wales. Well, a little short chubby fat kid running for nationals with number 287 was me,” laughs the current World Champion in Cross-Country Rallies, the winner of the Dakar 2016 and proud guardian of two smaller tuaregs.

Painting the Price
Another thing motocross riders do is put their last name on themselves. So, Toby got PRICE written down his spine, the exact place where the riders can pay the highest price. “I got the outline done and then basically left it as that for a year or so. When I decided it wouldn’t be that bad I went back to the chair and had it colored in. Well, not entirely. After the P, it started to feel really uncomfortable so I skipped R and went straight to I, because it didn’t take as much coloring in. After an hour I got fed up again and left. The plan was to come back again in a couple of days, as at that point I still had three letters to do. Unfortunately, it took me another year to finish it. My mates made fun of me whenever they saw it. It’s all under my shirt, no one knows of it, unless I run a racetrack and take my shirt off. I always like to keep them covered, I want people to approach me without being put off, even if now I am sitting here with a dodgy mullet. What does that say about me?”, he smiles. 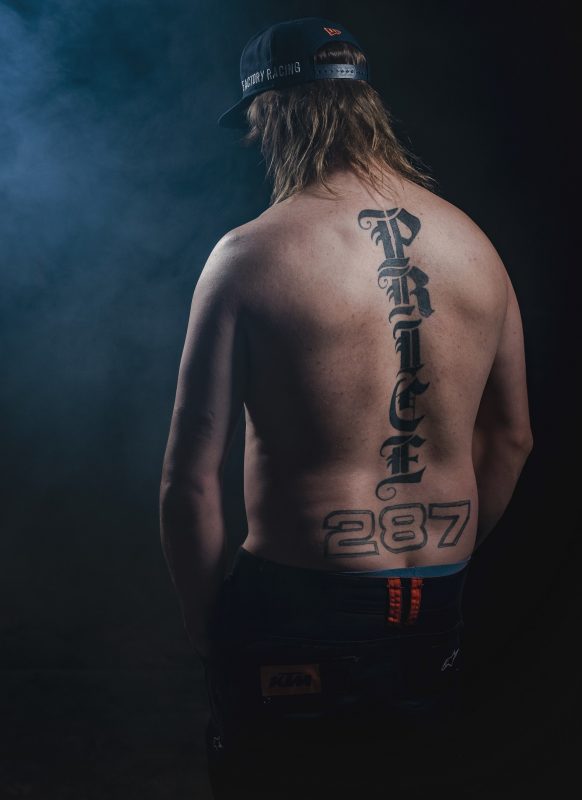 For a girl he would still carry in his arms if he could
“And then I also got one tattoo on my chest, a cross and two birds holding a ribbon,” he goes on. “This one is for my older sister Amanda that passed away in 2011. She had a big impact on my life and now I carry her on my heart. I know she is keeping me safe while doing all this wild, crazy and wonderful stuff. She was disabled from birth and also blind, so already as a kid I was looking out for her. I was her legs and her eyes, I really enjoyed being around her. I always thought to myself that could have been me. She taught me about how precious life is. Because of her and for her I live my life to the fullest. You never know when your numbers are up and you’ll get cold. Therefore, when the moment arrives, I will be sure that I did everything I could, pushed hard and gave 100 percent. I never say no to anything, I grab every moment with both hands and run with it. This is why this tattoo means so much to me. I knew what I wanted to do, and strangely enough, although the two tattoos on my back were extremely painful, the one on my chest, I knew it was for a reason and I don’t even remember it happening.” 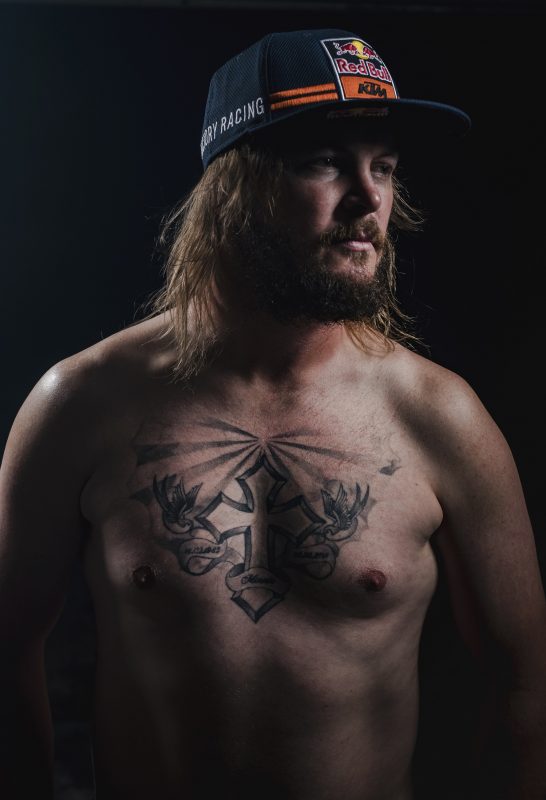 Time to race
Speaking of expanding his tattoo collection, Toby says he’ll wait and see how many Dakar trophies he is able to get, and then he will act. Also, his next tattoo will be meaningful to him. It will talk about something he’s achieved and done. “What I know for sure is that I don’t want to get anything random, and I also have to accept the fact that there is no more space on my back,” laughs the wild Aussie.

The road to a new tattoo will obviously be dusty, fast and utterly adventurous.

7 Responses to Under the skin of the rally team: Sam Sunderland and Toby Price talking about their ink