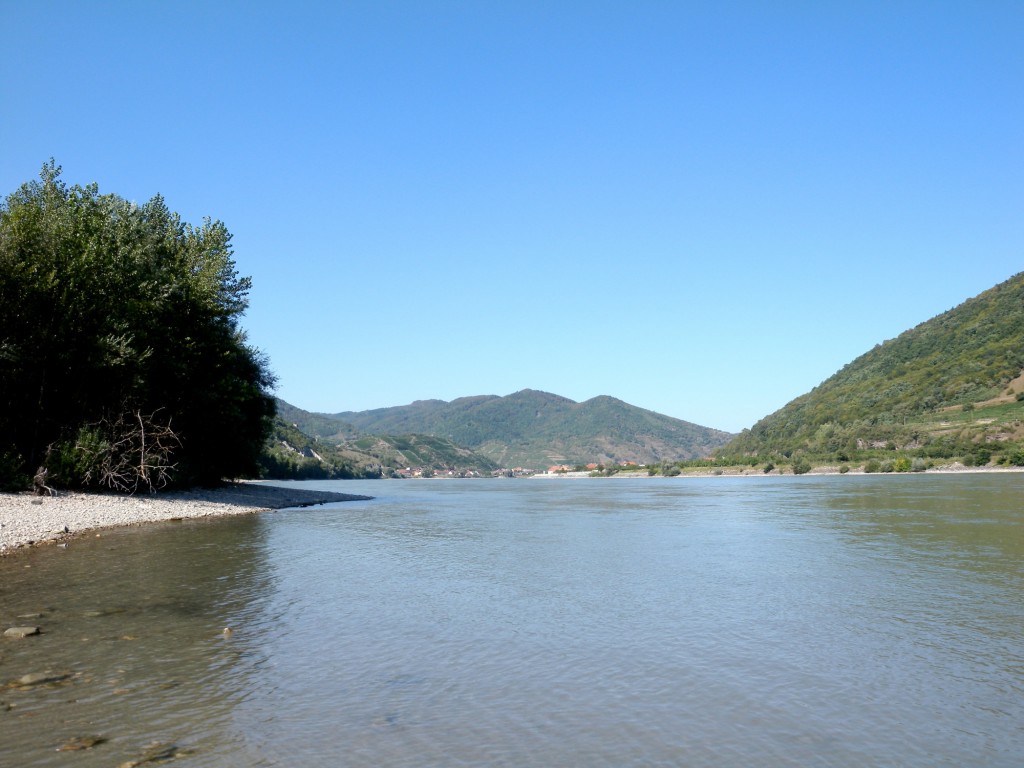 A heat wave like we’ve not had in years – and the summer break is still so far away. But the 690 DUKE is ours for two weeks. We will conquer the city, escape to the forest and dive into the water.

The summer has decided to hang around a bit longer. By eleven in the morning at the latest, the air is beginning to flicker and shimmer. It’s completely still, the leaves, the grass are all motionless; even the wasps, usually so annoying, seem jaded this year. We’re bathed in sweat every time we stop at traffic lights. Why is it that water hydrants always burst in New York but never in Vienna? Wouldn’t it be wonderful to take a dip in a fountain for a while? I think that would suit the Duchess as well. But neither a fountain nor even a lawn sprinkler is providing even the slightest hint of moisture. That means just one thing: back to the water for an hour or so at the least. We would like to stay longer, perhaps for a swim or just to float in the water, but there’s no chance of that. The next appointment is in the diary – we really shouldn’t be having meetings at the height of summer. 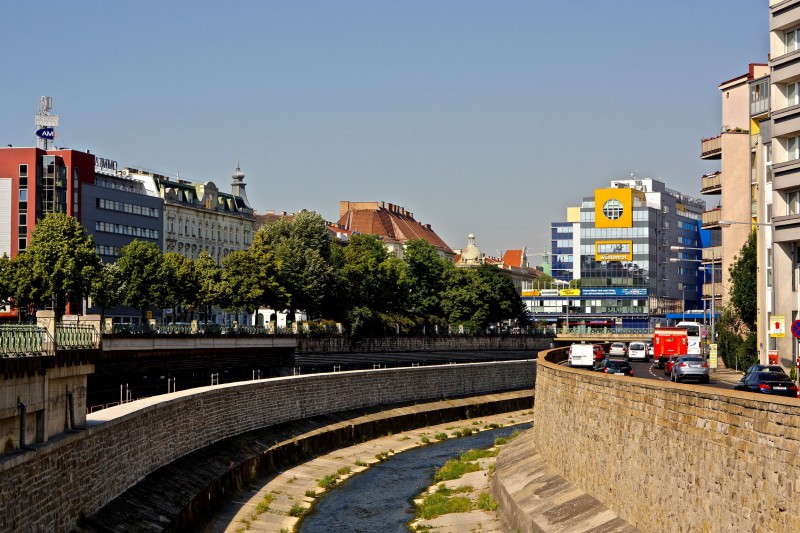 We linger on the banks.
Just the sight of water would cool us down at the moment, so to indulge the Duchess in this illusion, we take a short detour to the weir at Nussdorf where the waters of the Danube are diverted to feed the eponymous canal, and locks balance the levels between the two watercourses. 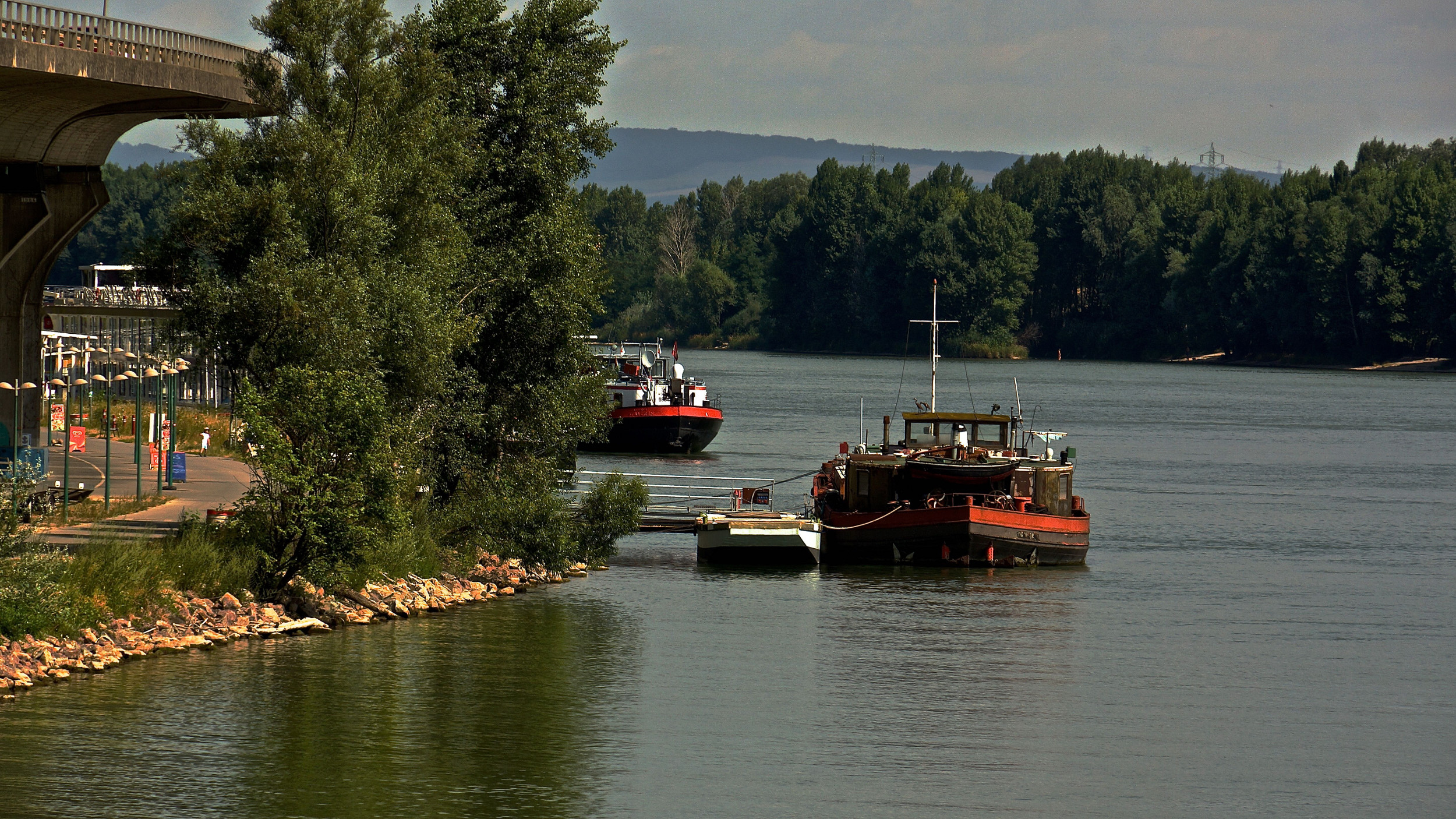 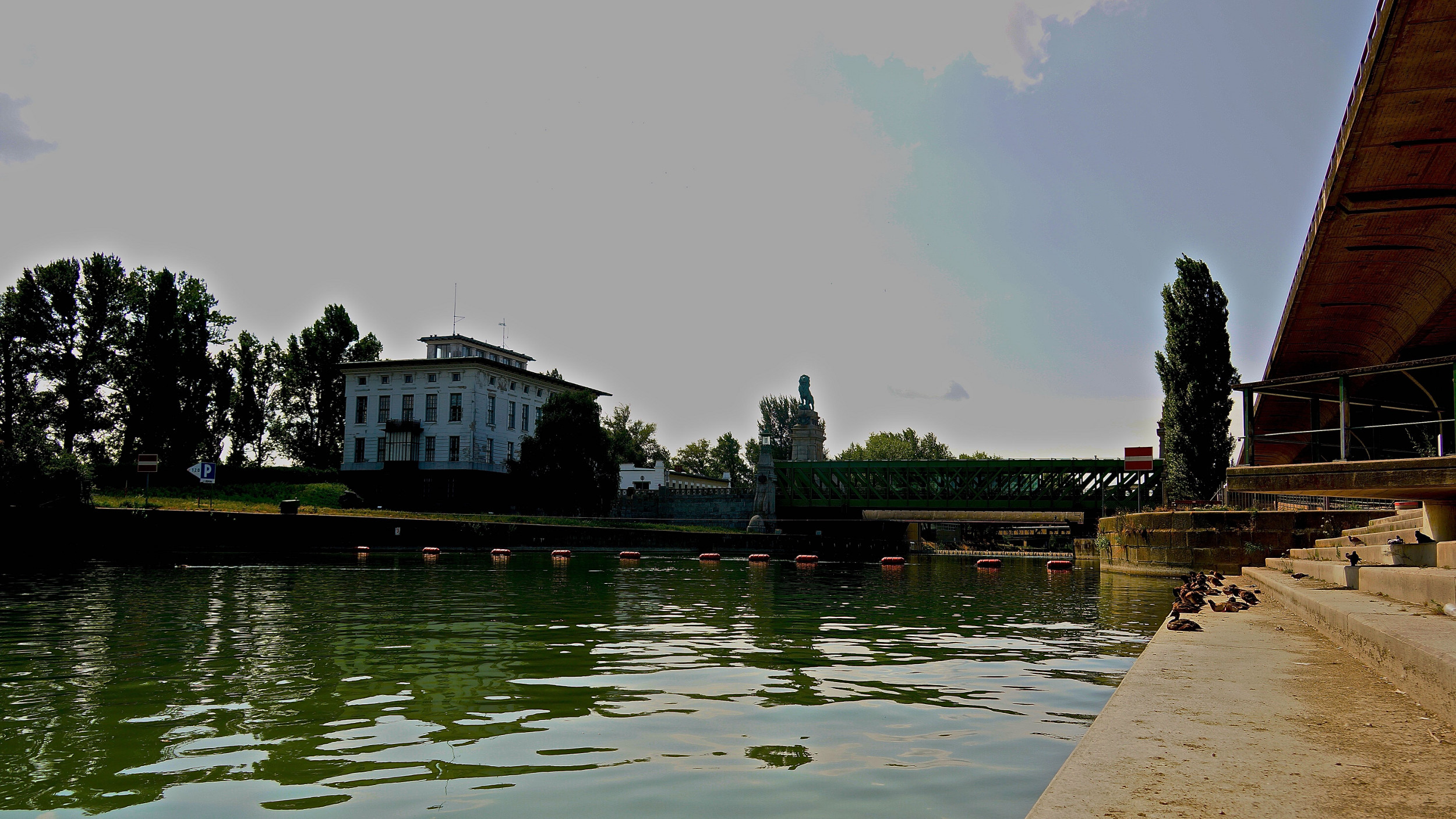 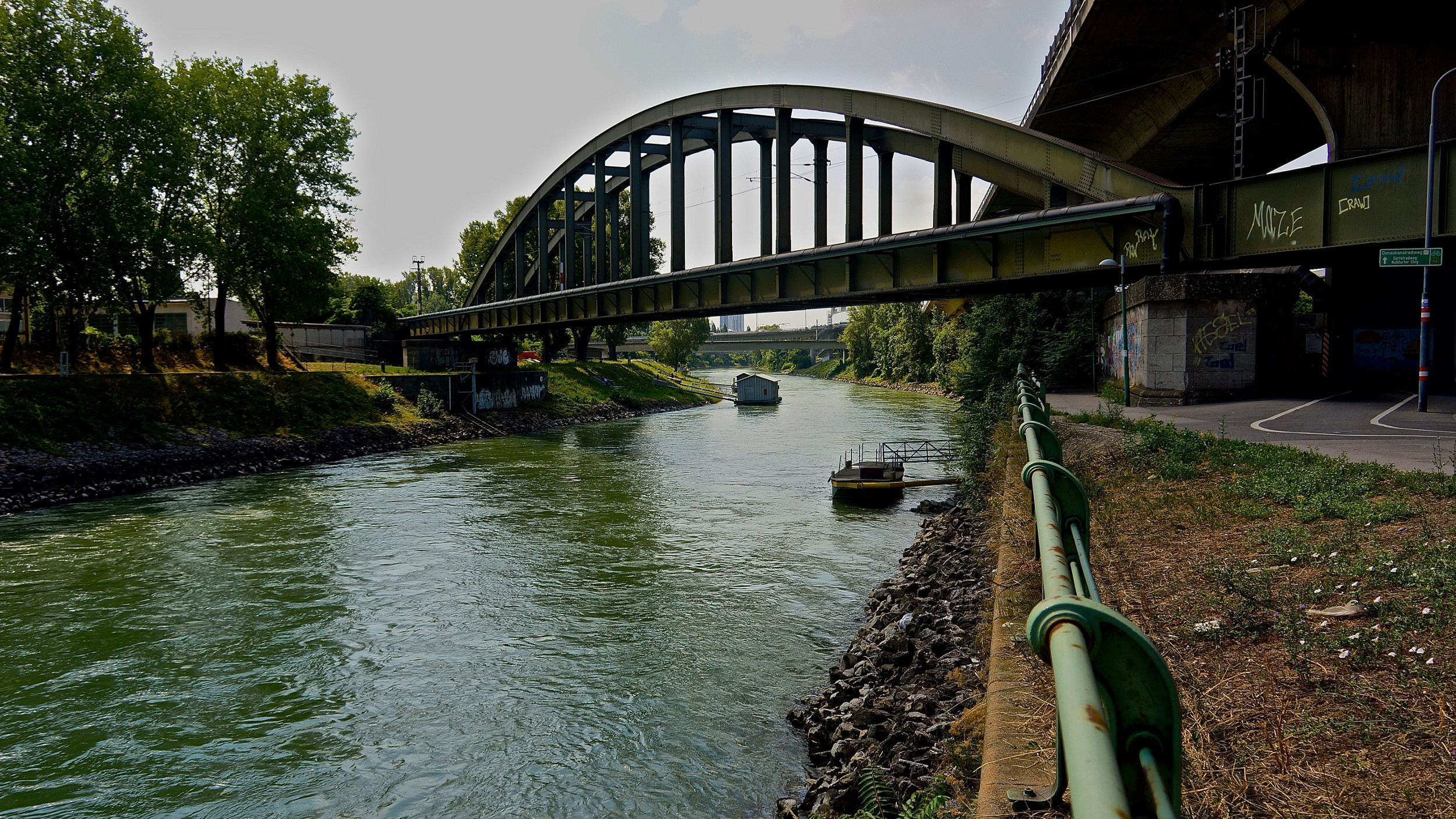 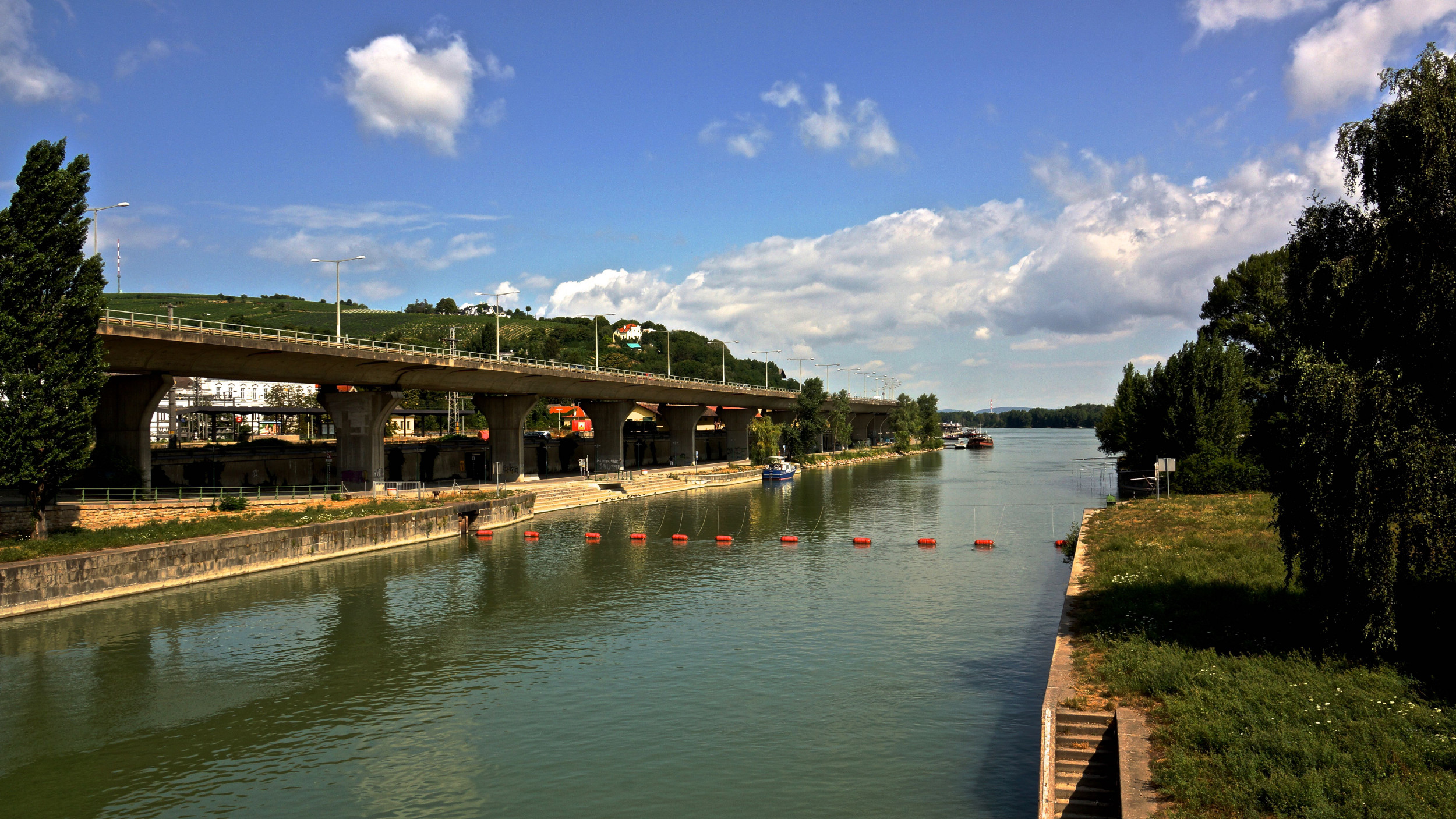 Taking the road from Vienna to Klosterneuburg, proud stone lions show you where the site is. They are at eye level as you fly past on the highway and you always wonder how to get down to them: You have to take a few side streets and cobbled alleys to find your way there. But it’s worth the effort, just to linger in the shadow of the bridge and watch the rise and fall of the boats, hinting at a journey from a small stretch of water such as this to a much, much larger expanse. I think embarking on a voyage would be good for the Duchess as well, seeing the banks of the Danube from the water, up to the Black Sea and beyond … 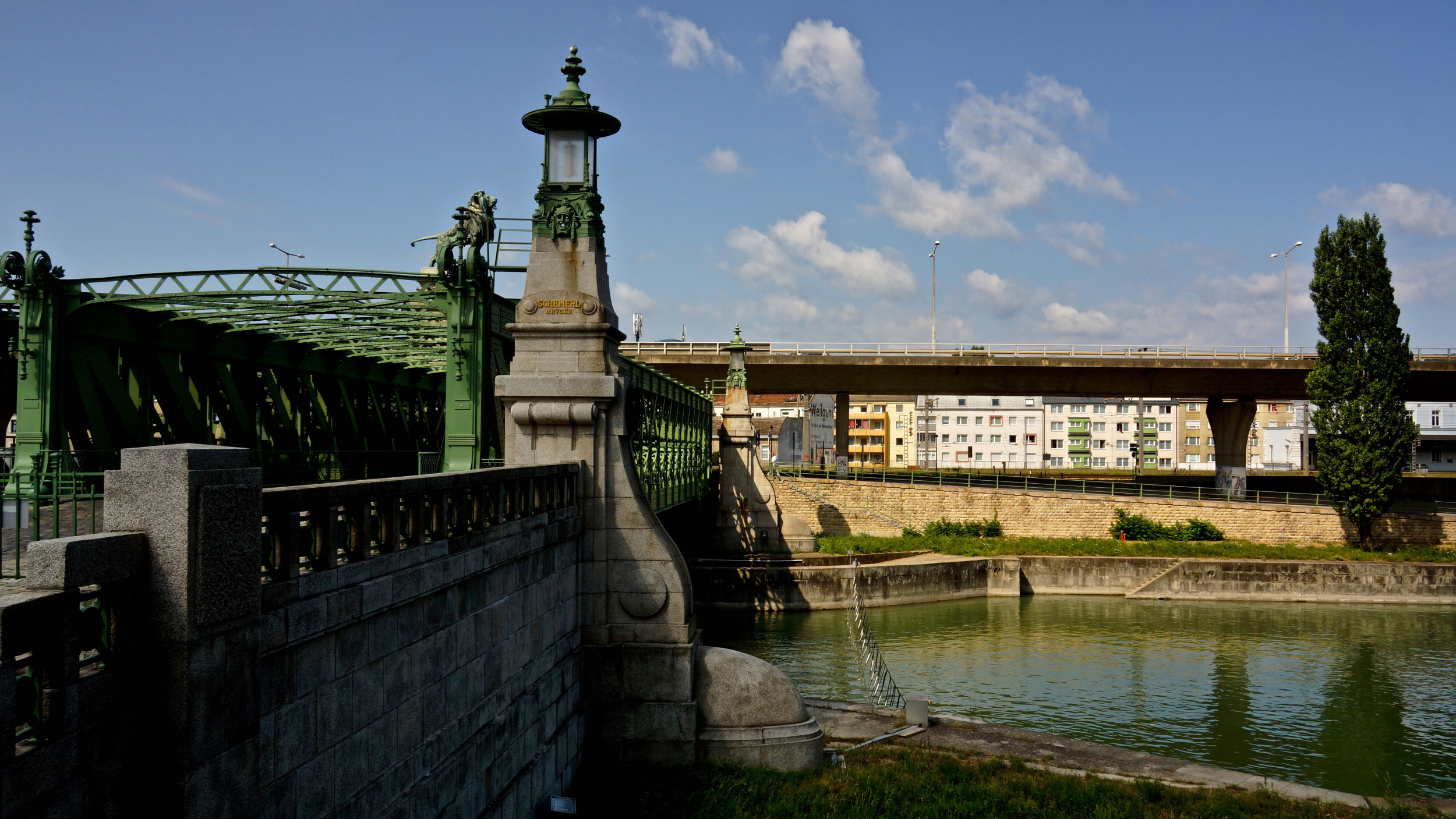 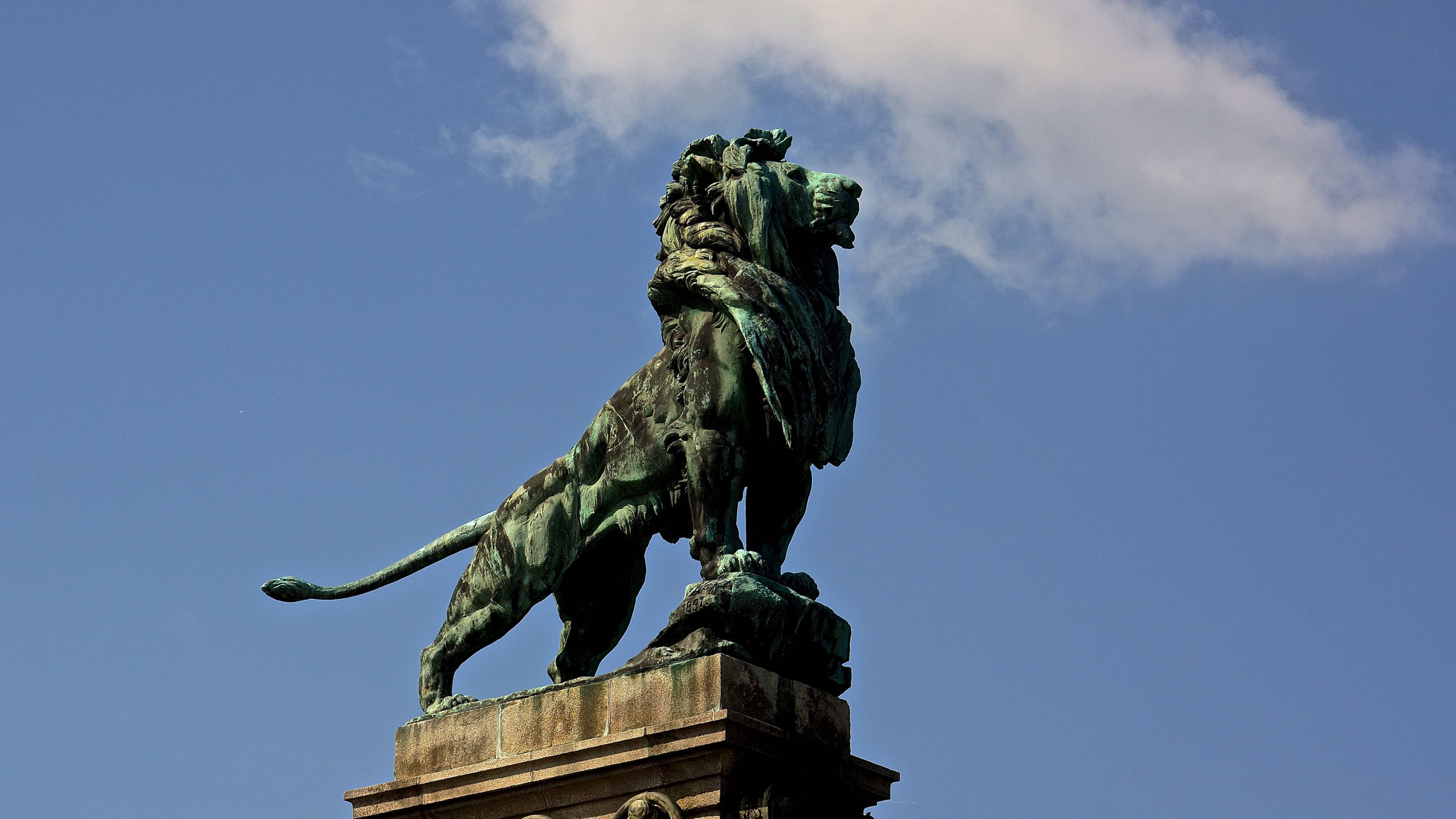 We immerse ourselves in the night.
The last meeting is over, the laptop packed away in my backpack and evening creeps up on us. The light levels are falling, but the temperature isn’t: The thermometer still reads 35 degrees even as darkness begins to fall. We haven’t moved far from the Danube Canal. So we stay just where we are and aim for the Badeschiff (bathing ship) and the local bars in the company of a smaller 390 Duchess. But how do we get there? We can’t go down past the dome of the Urania planetarium and park our bikes where we can see them, as motor vehicles are not allowed down there. Not even saying we were making a delivery would be a believable excuse at this time of night. But surely it would be OK if we were under electric power? If electric bicycles are allowed, why not electric scooters or electric offroaders as well? There’s no exhaust to worry about – perfect for the FREERIDE E! 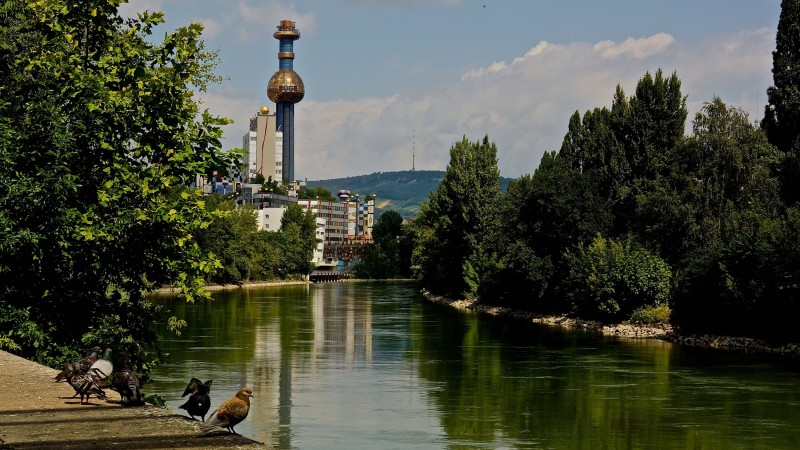 But not right now, not yet. So we leave our guests from Mattighofen on Franz Josefs Kai and take a stroll through the bar district by the canal. We enjoy liters of soda with lemon and apple juice and relax into the chatter of the people packed in around us, the smoke from the barbecue and clouds of insect repellent, gazing into the slow waters of the Danube Canal as they drift past, sparkling with light. Even the water is hot.

We take a trip to Africa.
Watching the water is good, but it’s even better to be in it – not necessarily in the Danube Canal or just the bath at home, but the New Danube which is much better, even if it isn’t as cool as usual after three weeks of continuous heat. The water must be 25 or 26 degrees by the bank, even in the shade by the Danube Island. Not far away, the annual Africa Festival is getting into gear, bringing a taste of Africa to Vienna for two weeks. In terms of weather, it couldn’t be better this year – even if it is monsoon season on the equator or winter in South Africa. We usually get rain at the end of July and the beginning of August in Vienna, often with storms and unseasonably low temperatures, but not this year. 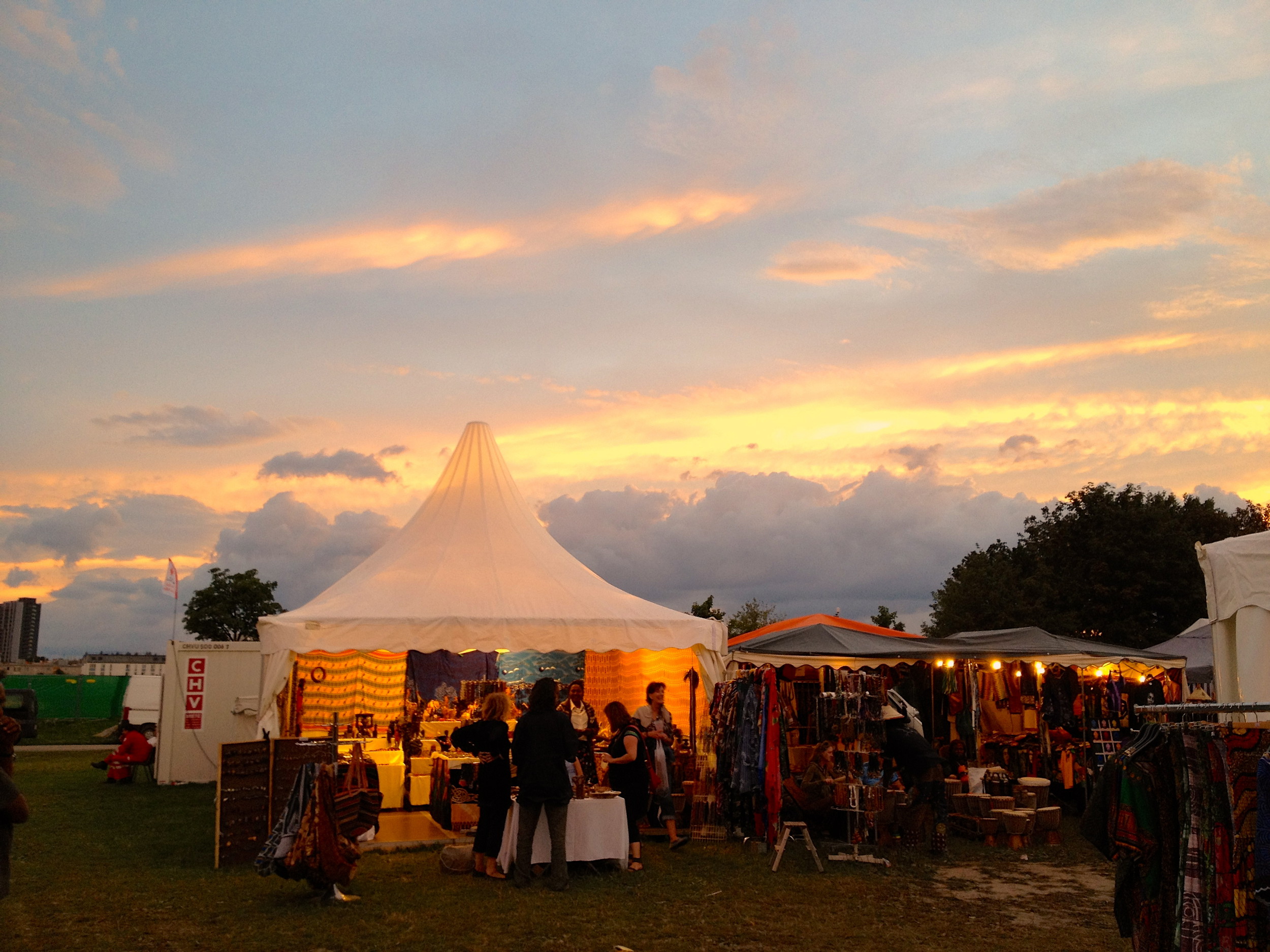 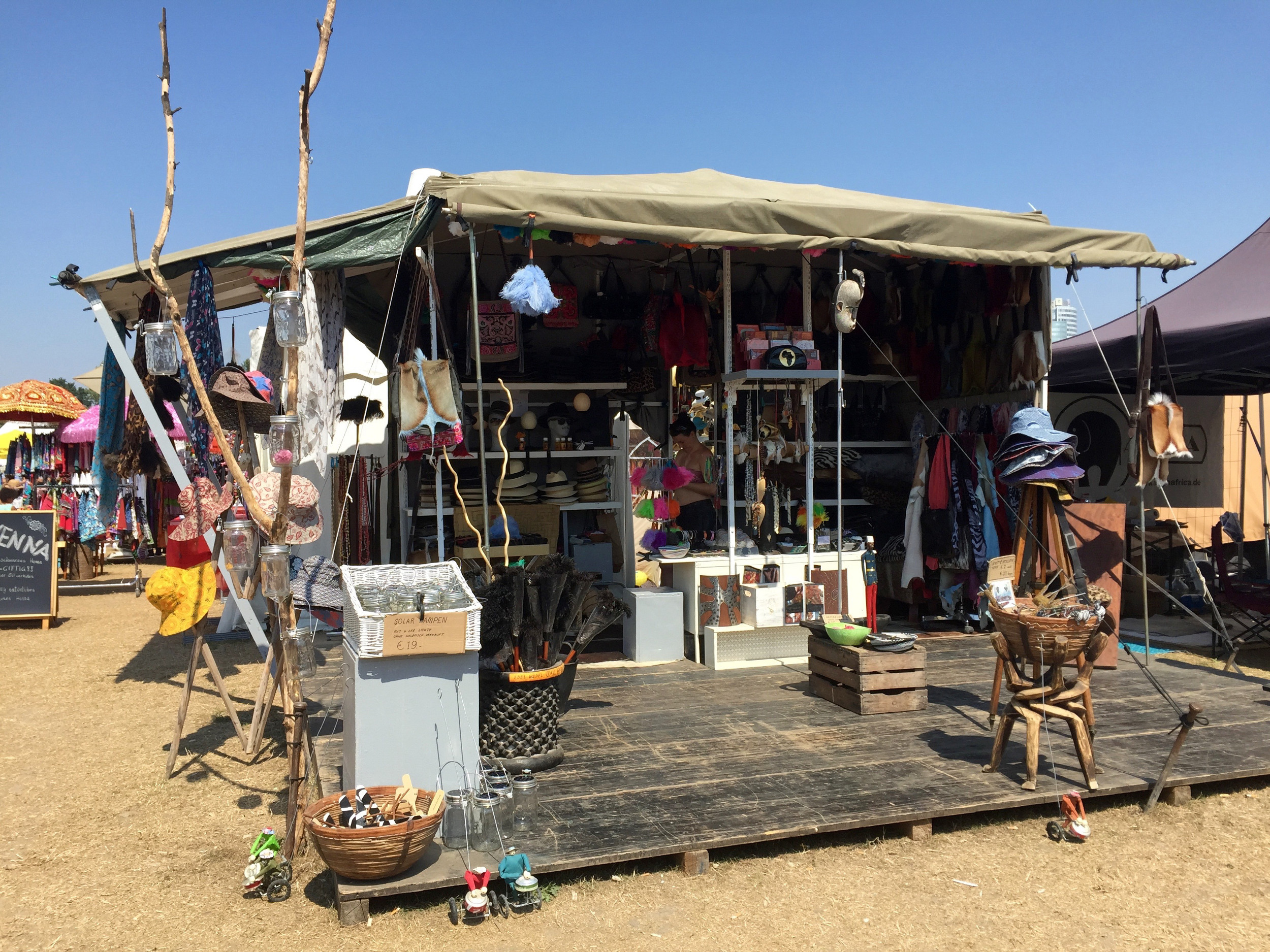 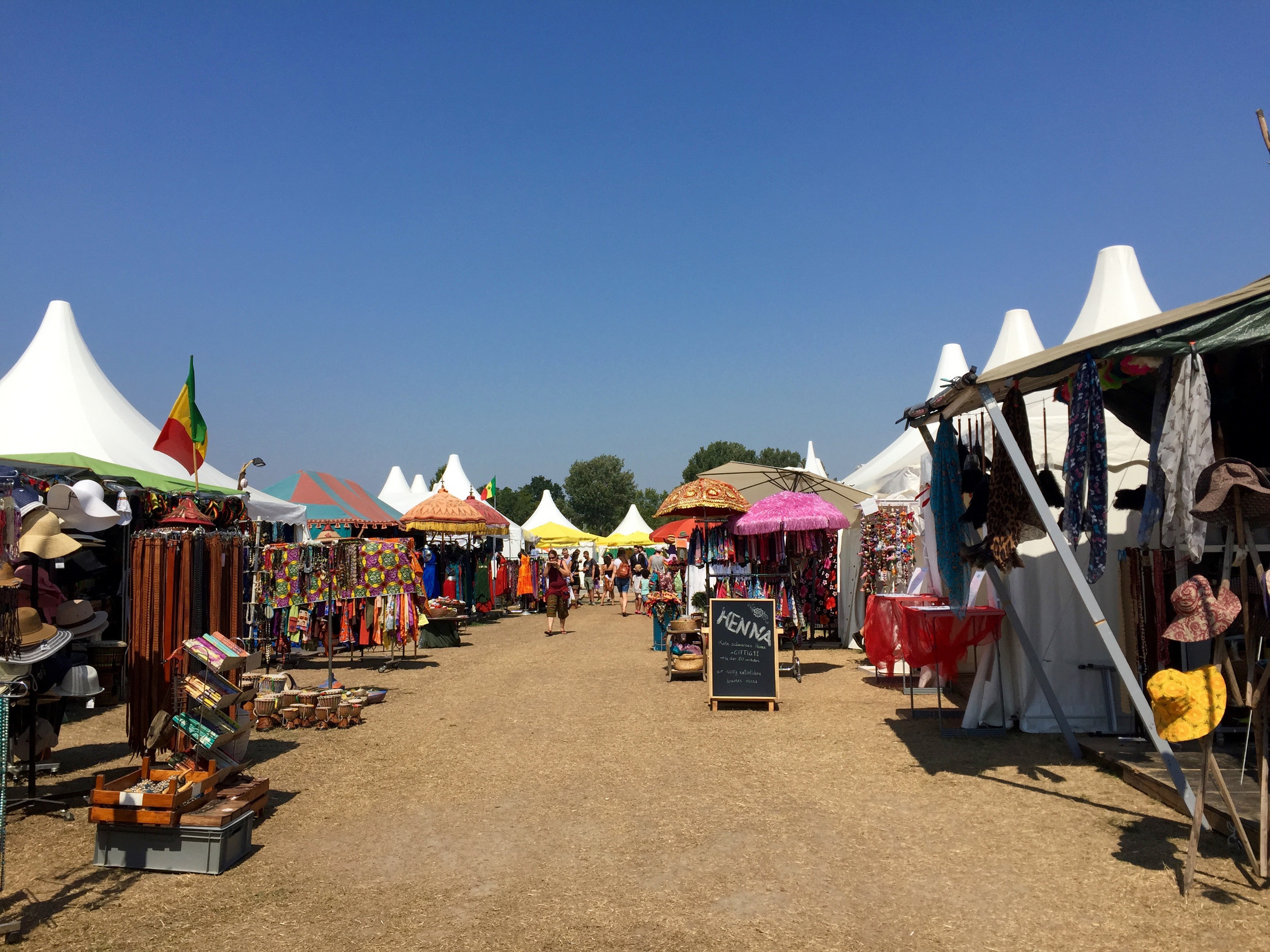 So, the Duchess and I settle down on the banks of the Danube for a few days. We make any important journeys either at day break or in the evening when it’s only 29 or 30 degrees instead of 38 to 42. During the day, the Duchess has been resting in the makeshift shade of the tent canopy, while I’ve been alternating on an hourly basis between dusty festival fields and the shady beaches of the Danube Island doing plenty of swimming – often late into the night. Then I’m up with the lark as the first rays of sun begin to heat up the marquees, before taking the Duchess out to go shopping, or pick up or drop off a package at the post office. 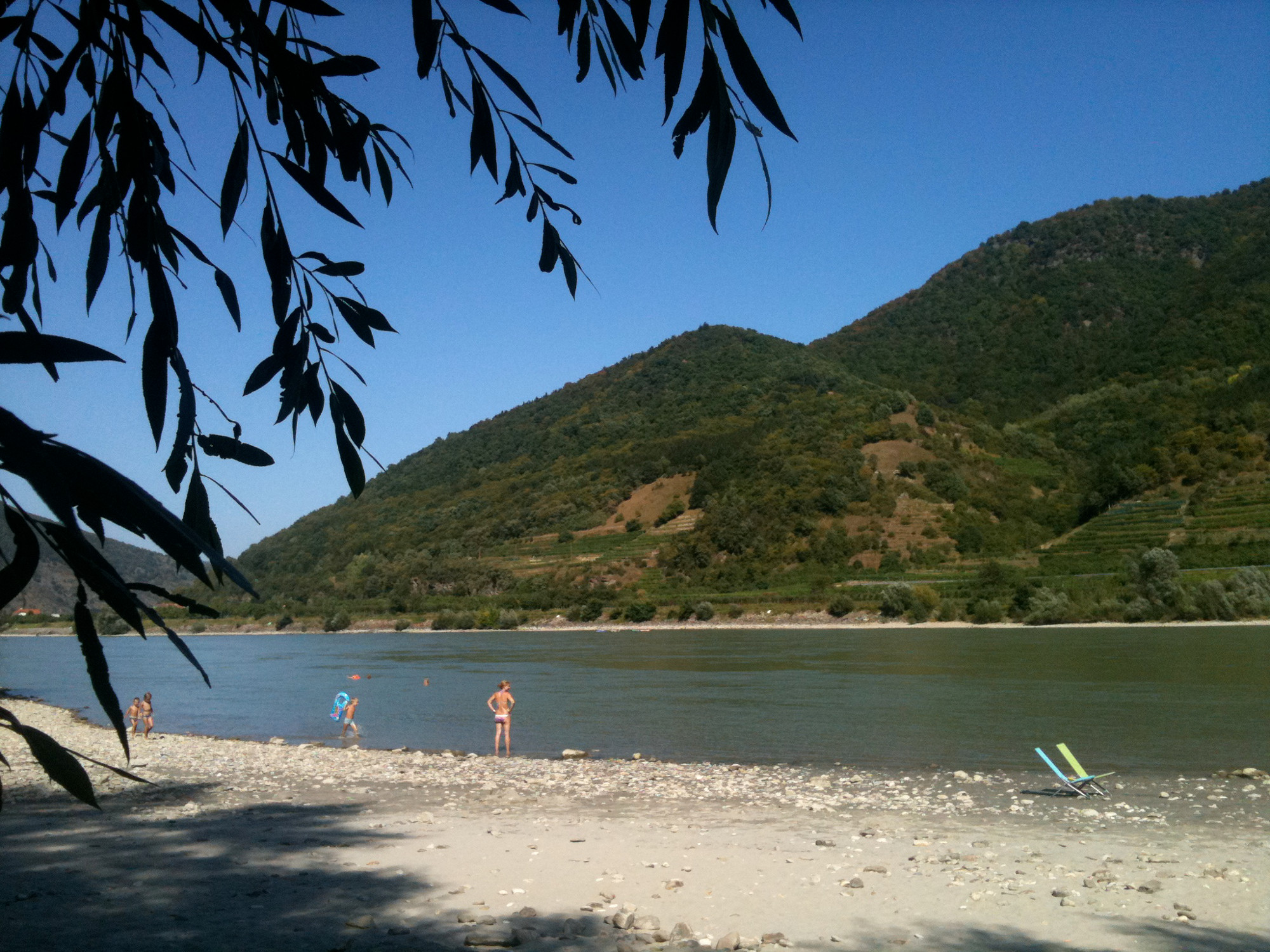 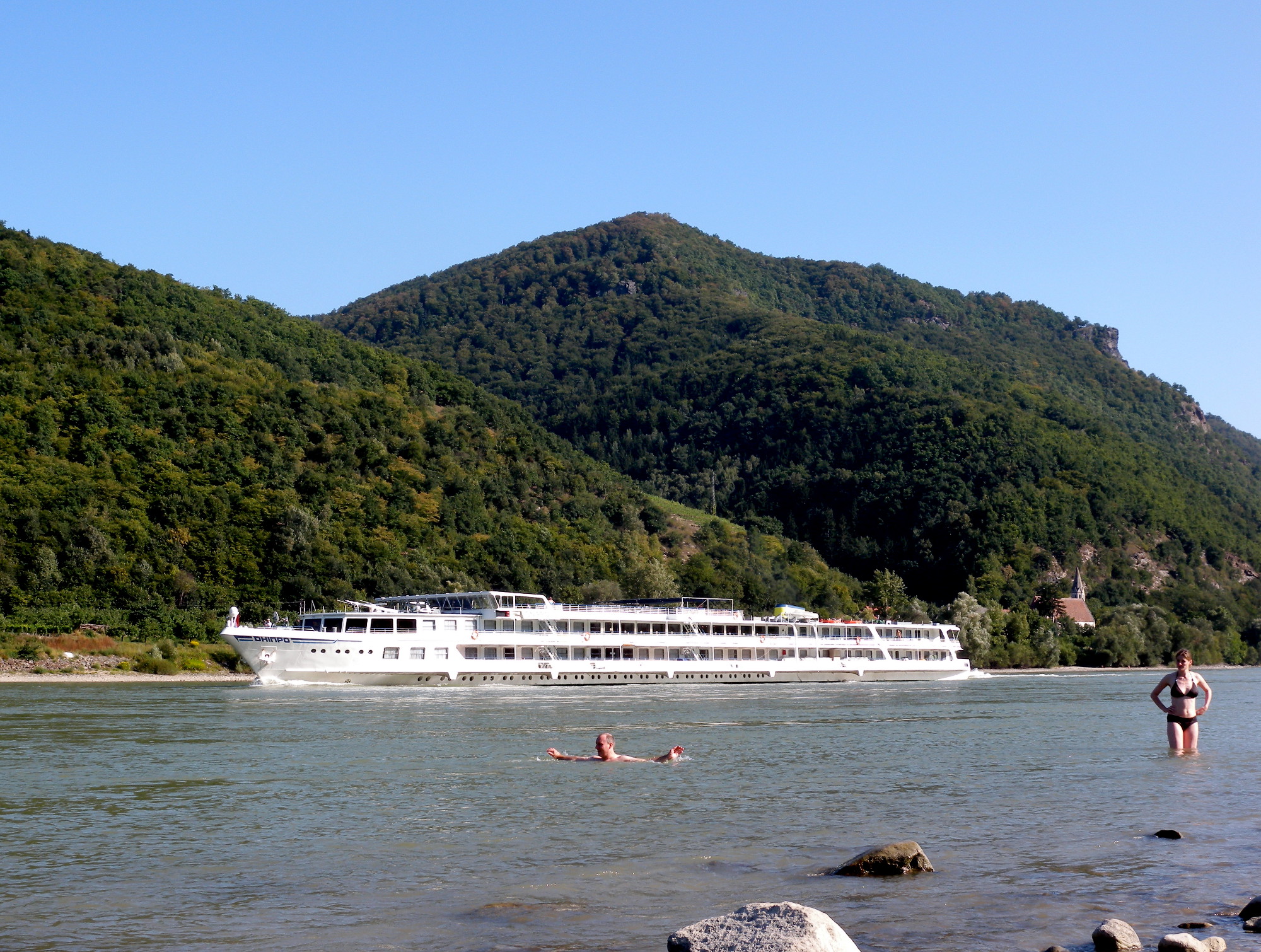 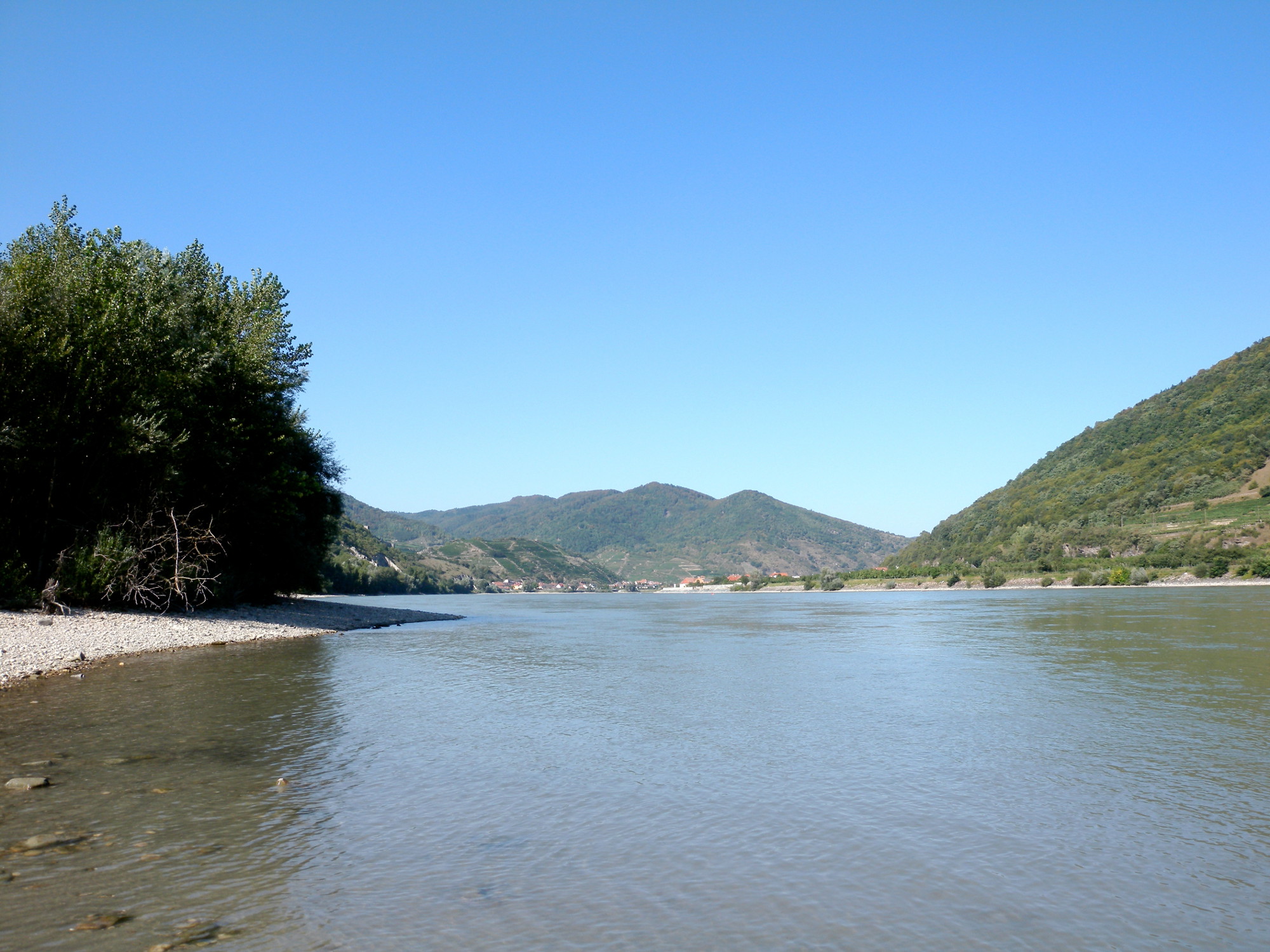 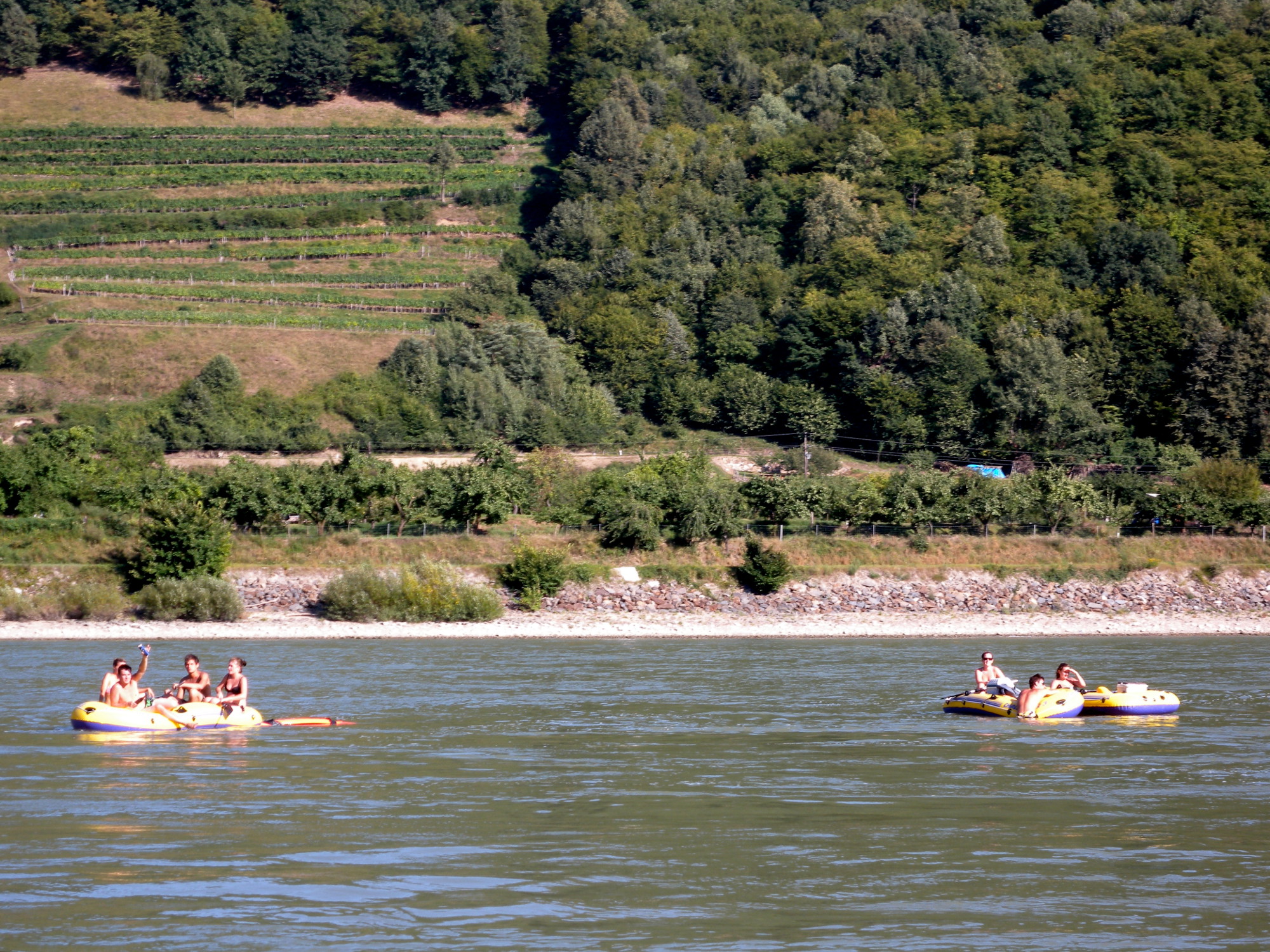 We go our separate ways.
My two weeks with the Duchess are over, as she has to go back to Mattighofen. Time has flown by, much too quickly, and without a drop of rain. We take a short turn through the Vienna forest again before I have to leave her behind. I pause for a cigarette: What would I do if I could keep her? I could fit a nice short rear end or add a fancy new silencer. I’d certainly adjust the chassis to suit my (light) bodyweight and firm it up a little. But wait a minute, I don’t do long goodbyes. I know that we’ll see each other again next year. Then we’ll finally go back over the Alps, into Provence, across to the ocean and into the arms of the Rhône. We want to see the horses of the Camargue and the flamingos, taste the salt in the air and eat red rice, and do much, much more. It will happen – I promise!