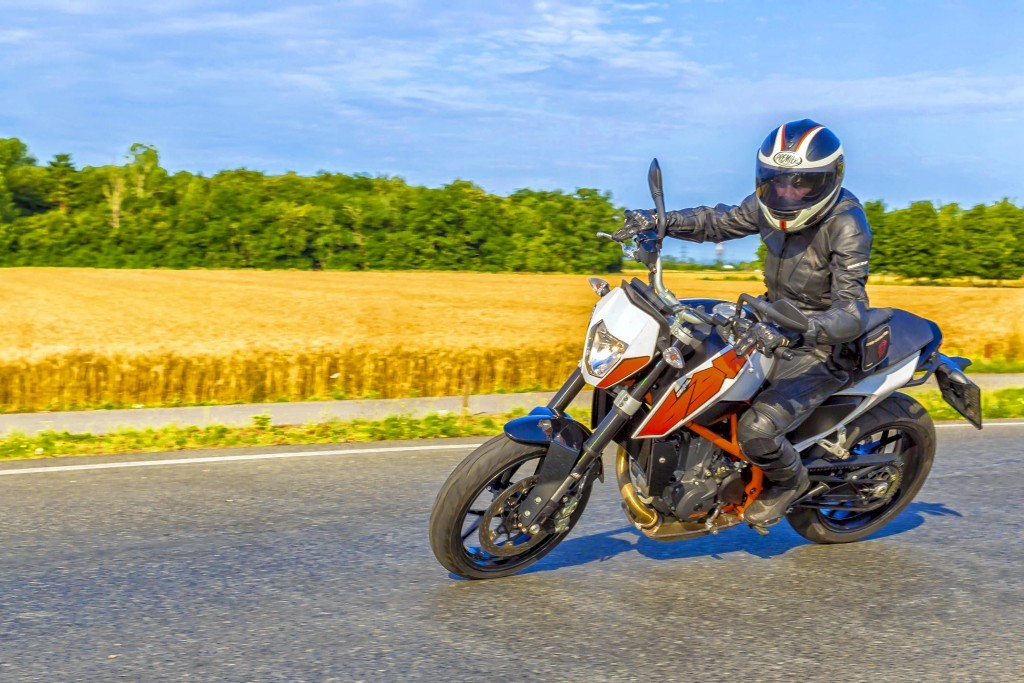 A heat wave like we’ve not had in years – and the summer break is still so far away. But the 690 DUKE is ours for two weeks. We will conquer the city, escape to the forest and dive into the water.

Where has the summer vacation gone? What has happened to the time when customers began to drift away on vacation at the beginning of July and resurfaced no earlier than the middle of August?

It’s just not like that anymore. And that throws our original plan to take the 690 DUKE across the Alps and on to the Atlantic Ocean out the window. That is going to have to wait – again. Too many meetings, too many projects, too many deadlines. Even the weekends are full. Hardly any time to get out of town, even for a short while. What are we going to do? Make the best of it – in small(ish) doses. We will have a good time in the brief time available, the Duchess and I. 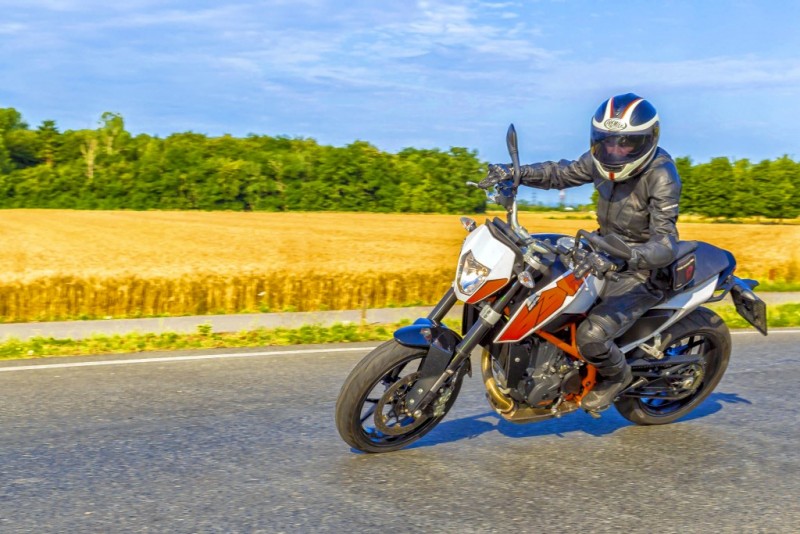 We meet again.
With a trip halfway round Vienna. Western Austria’s mountain dwellers look east with pity: no real mountains, just low-lying land and hardly any challenging curves. How could there be at the edge of the Pannonian Basin? It’s not quite that bad. The Vienna Woods have their own sharp corners and the gaps between the cobbles on the Höhenstraße are enough to give the chassis and the suspension a good workout. There are one or two exciting hill climbs as well – and they’re only twenty minutes from the center of town. So we decide to pay them another visit – it’s been a good year since we were last there.

First, we head north, along the Danube, via Kritzendorf and Greifenstein on the less well-known, narrow, little roads through the forest, then in a wide arc to the much-vaunted Helenental, to Baden, along the Weinstraße and through Gumpoldskirchen and then back to the city. That’s all the time we have at the moment for getting reacquainted. The Duchess and I have always got on well, ever since her first incarnation when you had to give her a hefty kick to bring her to life. We have grown close through every reincarnation.

For now, though, we don’t have any more time to indulge ourselves. The diary is full – as ever. For the next few days, our hunting ground is the city center – rush hour traffic, 30kph speed limits and pedestrian rights of way, and the tourist hotspots of the city.

Off to the airport.
The next entry in the diary is: Two-day meeting abroad. Depart 7.20 a.m., tomorrow. Return 9.30 p.m. the following evening. That means off to the airport in the early hours, one way or another, either by public transport or by car. The first takes an hour. The second half an hour at the most. The car is a non-starter as it is currently not available. However, the Duchess is outside. And at least at Vienna International Airport there is a chance of finding a space outside parking lot P3 without having to fork out a month’s rent to pay for it. 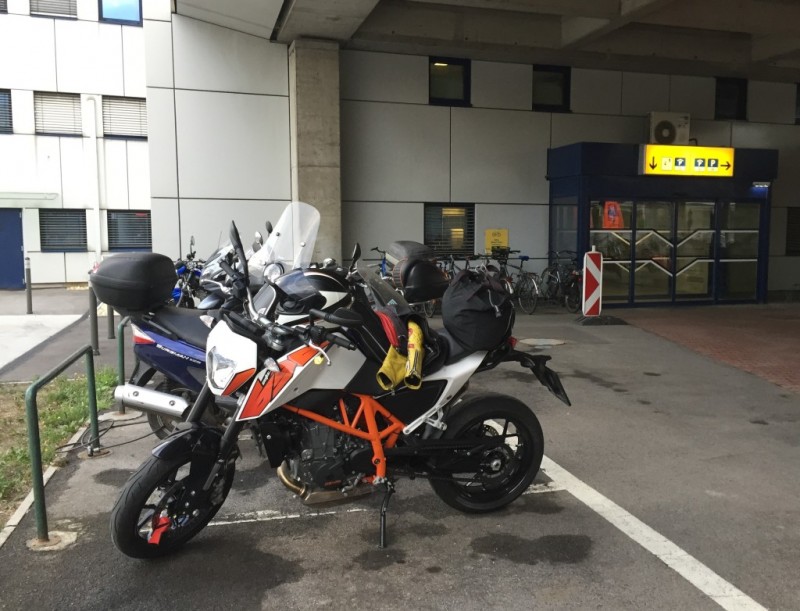 That gives one of my coworkers some cause for concern: “What are you going to do with your helmet and your jacket? Are you going to take them with you?” He asks, knowing full well that I have no time for a “practical top box” either on my own or a loan bike such as the Duchess. Well, there is such a thing as a left luggage service where you can leave all the gear you don’t need for your trip – at an excruciating daily rate. No sooner said than done. The young man at the counter raised an eyebrow but politely accepted my jacket and helmet, gave them a number and stowed them on the shelves for safekeeping. And I retrieved my things safely, having completed my assignment, and took a relaxing ride home. The suitcase or luggage? You don’t need much for short summer trips. Just a light, practical weekend bag is enough. And I carry this exactly the same way as any other luggage: safely strapped on behind with a luggage net. 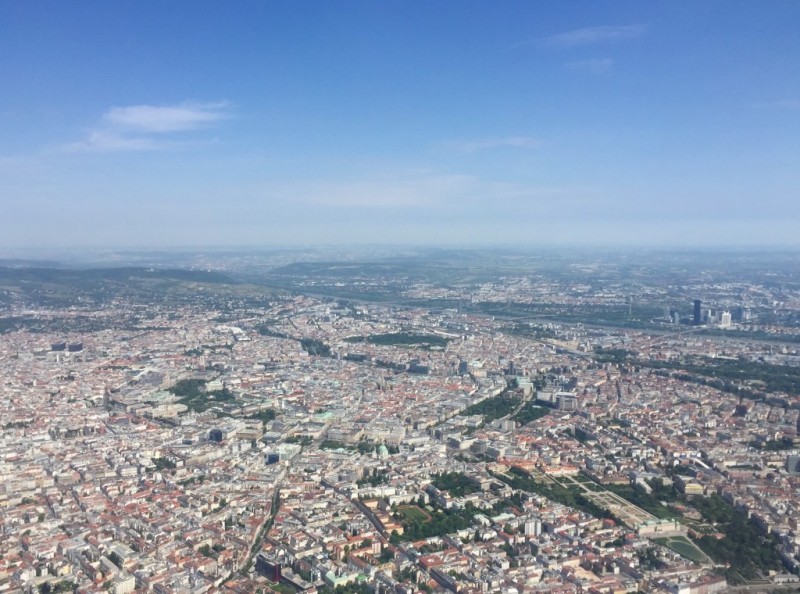 Looking for shade.
We are expecting guests – from Paris. They want to see as much of Vienna as possible in two days. Not all the well-known haunts, but what you might call the secret places, those places where the Viennese hide out when hordes of tourists flood the Danube metropolis. There are some suitable tours available, on foot, by bicycle, by Segway, on open- or closed-top buses but none (as yet) for motorized two-wheelers. Exploring the city this way gives you a unique perspective in a short amount of time, showing you that Vienna has its hills if you criss-cross the city from one side to the other. And if the group is not too big, then there are no problems stopping and lingering for a while here and there. 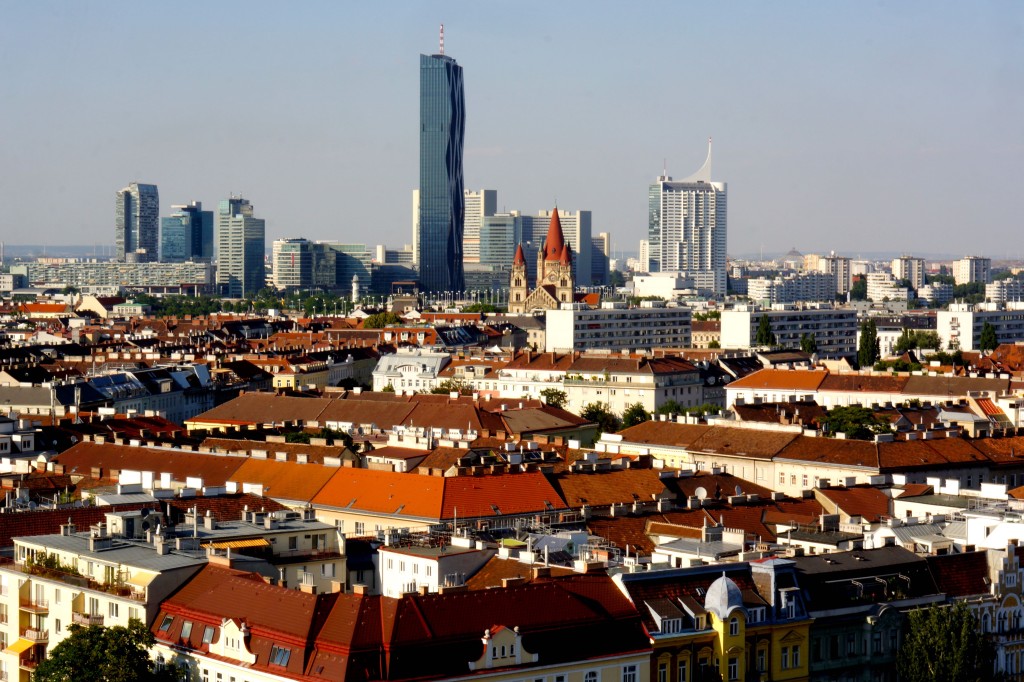 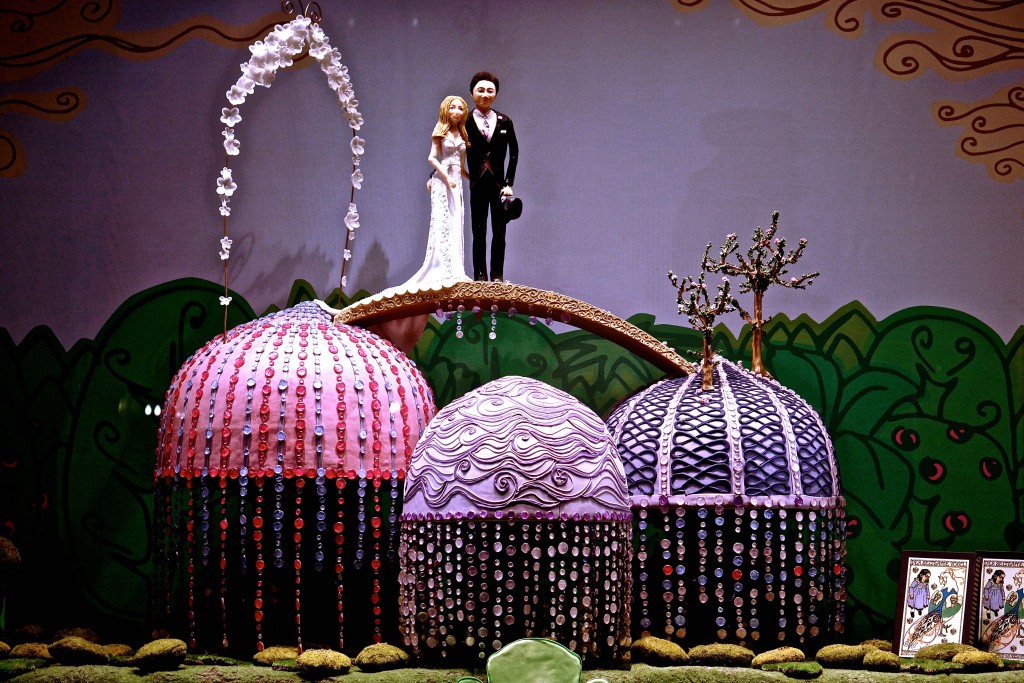 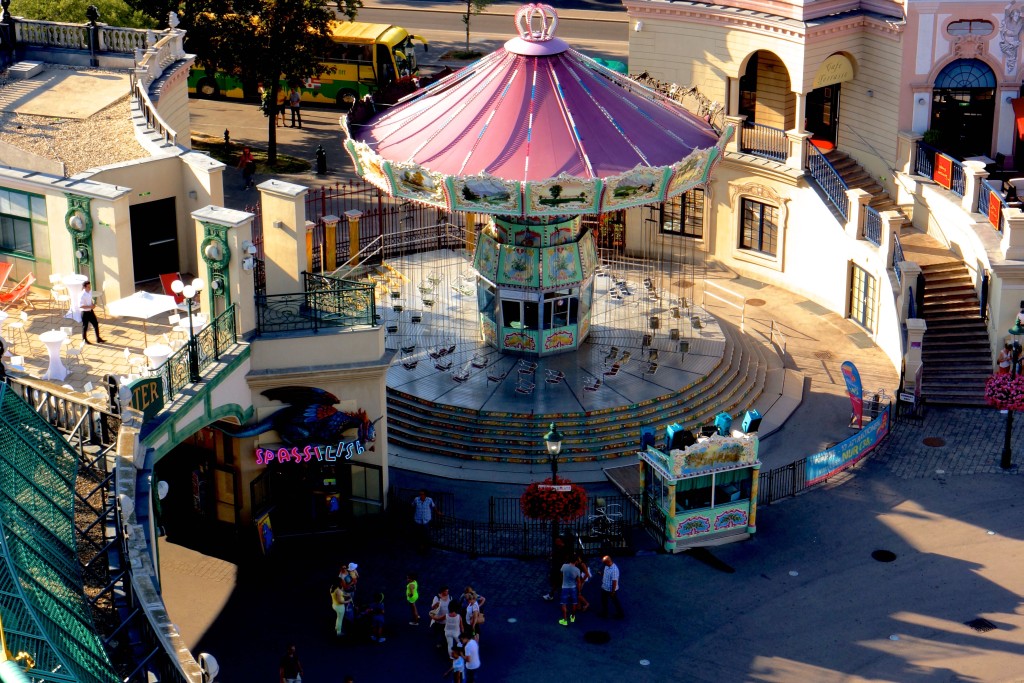 So we set off in our little group of four to take in, amongst other things, the vistas from the Kahlenberg and the Leopoldsberg before we tackle the city from the Wien valley. By now, the sun is right overhead and our desire for new sights is tempered by the need for shade. Vienna now offers an unbelievable choice of inviting outdoor restaurants and you can choose whether to eat local cuisine or more exotic dishes. But some of our group are obviously missing their French homeland. We can cater for that, and our sightseeing tour ends in one of the local open-air restaurants in the seventh district, where we are taken by surprise by a violent but short thunderstorm that cools our quiche, Croque Monsieur and the rest quite effectively. Admittedly, this quickly evaporates to a distant memory as a blistering sun returns in no time at all. 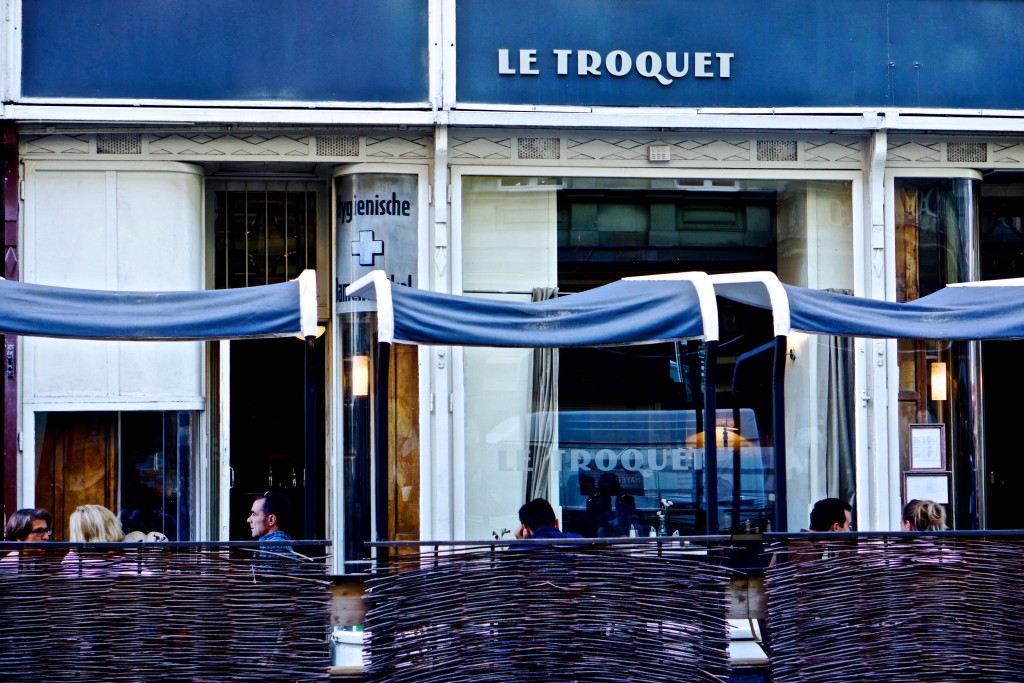 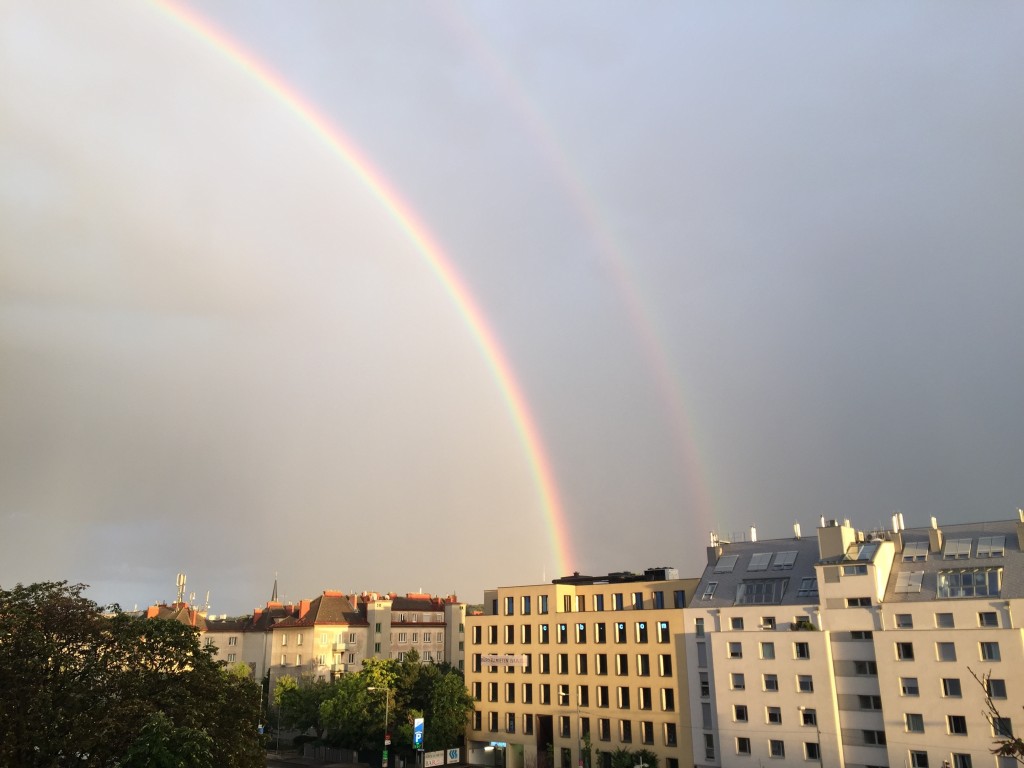 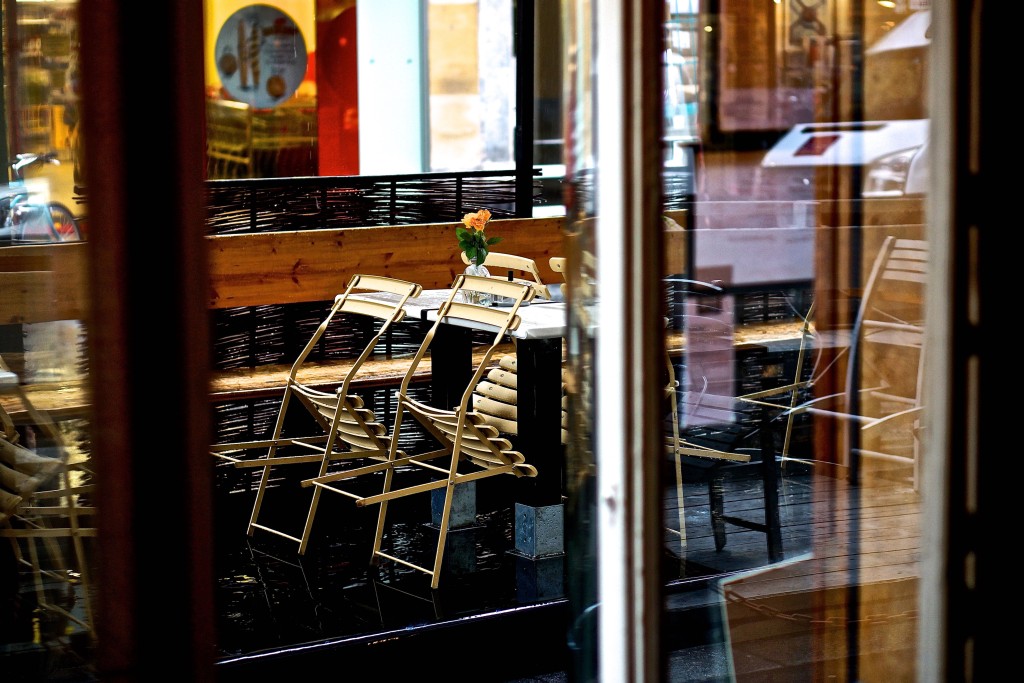