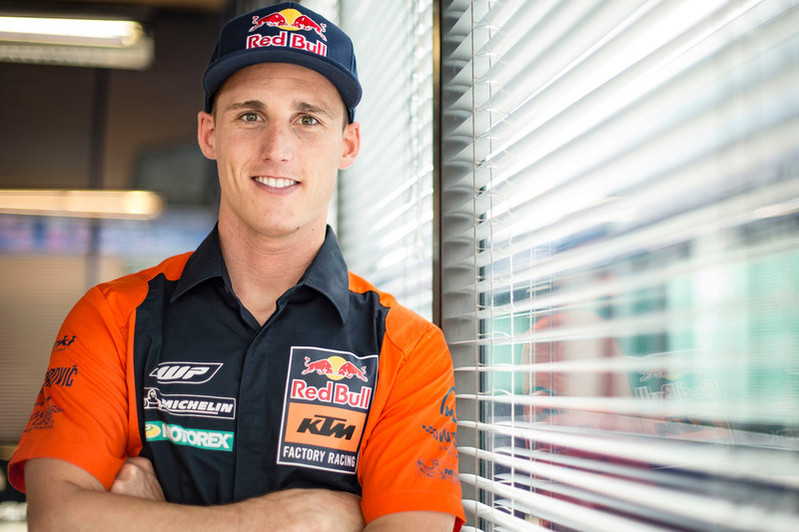 If the five relatively pain-free crashes by Marc Márquez at the Grand Prix of Catalunya demonstrate anything then the levels of protection that MotoGP™ riders can count on plays a crucial role. We asked Red Bull KTM’s Pol Espargaró for some more details …

Unlike motocross where a rider can be a lot more choosy and personal with his protective gear (knee braces? neck protection? back protection?) a MotoGP™ racer is a little more restricted. They might look like fire-breathing brutes but standing alongside the KTM RC16 reveals that it is a surprisingly compact motorcycle, and the same could be said for the other bikes on the grid. There is little room for big movement. The rider is a fundamental component of a design that can involve millions of euros spent on aerodynamic research and fine-tuning. It means the athlete has to submerge into the lines and form of the race bike and become a seamless unit of speed.

Helmets, reinforced boots, gloves and leather suits (kangaroo and bovine materials used for resistance and flexibility) all contain extra armored-elements to cope with the sort of crash that can see a rider ejected onto the track and into the gravel at more than 200 km/h (former racer now musician and TV presenter James Toseland once rated his gloves as the most important item, reasoning that a rider’s hands are usually the first thing that hit the ground and many ex-competitors crooked fingers will tell the tale). 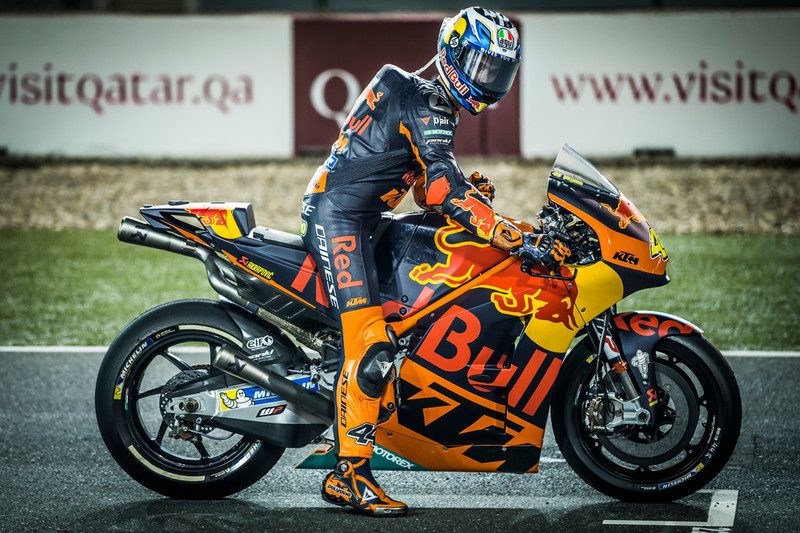 Most suits at this level of racing and from brands like Alpinestars or Dainese will be made to measure and fitted with protection for specific parts of the body and according to the rider’s requests (even injury-induce limitations for movement or comfort). You might see a MotoGP™ star slide a small chest protector inside before zipping up their suit but largely this is part of the compromise between safety and being able to do the job. “The chest protector is unusual for me but it is for safety and it is in the rules,” Pol says. “Dainese have tried different thicknesses but when you are on the bike and you have something here then it is not natural or comfortable.”

While suits have progressed enormously with their effectiveness, build, durability and even ventilation there is one aspect that is still pretty new: the elbow slider. Phenomenal tire grip has allowed MotoGP™ to get further on its side and more ‘acrobatic’ in the last half a decade and Espargaró has been one of the protagonists forcing more development in this area. “I was one of the first to get the elbow down,” he says. “I remember [Stefan] Bradl was the first but I do it more frequently and in the first year with Dainese we were looking at different materials and types of plastics to prevent the elbow slider wearing away in five laps. We worked quite a lot on that.”

On the subject of arms Espargaró – who has been part of Italian company Dainese’ program for four years now – has even been able to address the subject of ‘arm pump’ with a series of tight strips that almost pinch the skin and provide a form of relief. 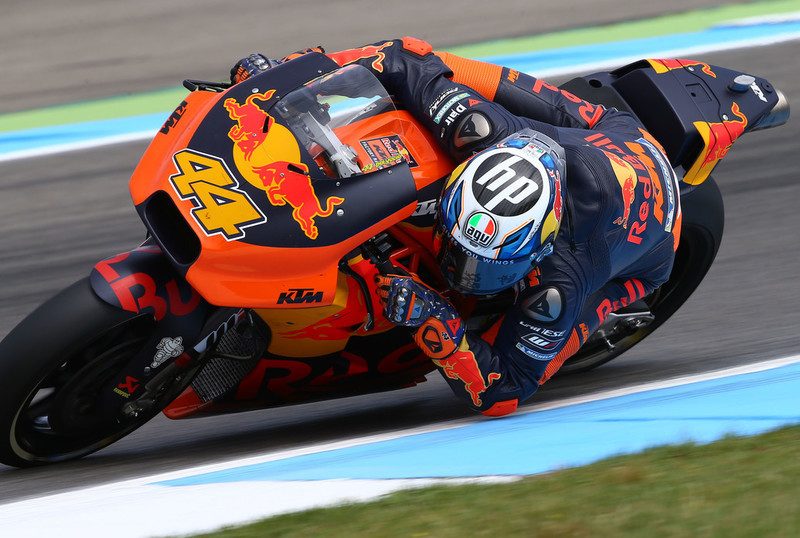 Customization is a big deal. Technical partners invest a lot of time and resources into racing and their product has to be effective for their representatives and ambassadors. Pol gives us an example: “In Argentina I had a burn that almost arrived to the tendon of my finger and Dainese helped with a modification for my gloves. The good thing about the company – and I say this not because I ride with them but because I’m honest with my opinions – is that they listen to you. It might not be a brand that gives you 100 suits but the quality of the 3-4 you get is 100%. The new gloves system I have is really nice. There is like a sheath with a metallic plate and then plastic on the top; it’s really cool how it is done.” 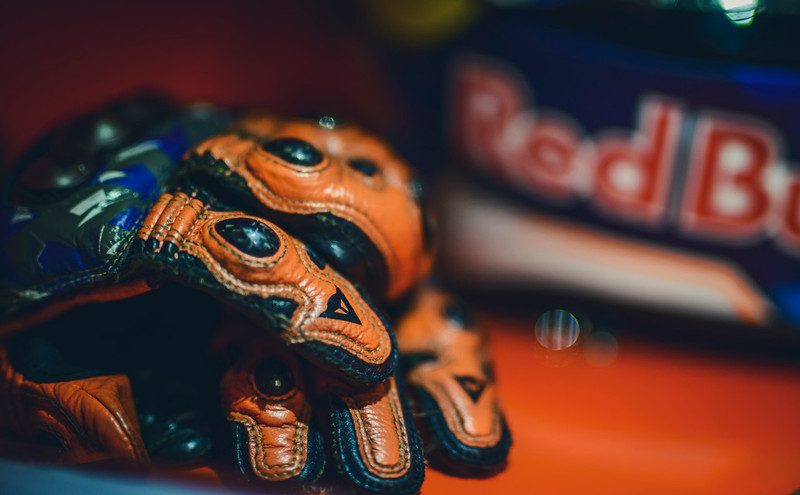 South African motorcycle safety gear pioneers Leatt spent three years developing a neck brace for road racing that was actually tested by Pol’s brother Aleix, also competing in the MotoGP™ class. The difficulty with the small unit was finding the balance between functionality and practicality (that aerodynamic equation again) and the project was temporarily shelved last year. Since that time there has been very little in the way of innovation for riders. The main evolution has been in the development of airbag technology with Alpinestars forging ahead with this remarkable provision and firms like Dainese also pouring time and expertise into R&D.

The clever system works thanks to a complicated set of algorithms and sensors installed into a small pack within the leather suit and fires instantaneously when a rider is in the first milliseconds and phases of an accident. Alpinestars have now brought their discoveries to the street motorcycle market and the protection is used by most of the grid in MotoGP™.

“We are working a lot with the airbag system because for me this is one of the best technological improvements of the last years in racing,” Espargaró says. “Every time I’ve crashed I’ve been telling Dainese what is going on, how the impact was, when I felt the airbag inflate and as much information as I can. Without the airbag now I will struggle to ride. You don’t know it is there and the moment you feel you are going down then it inflates and protects the collarbone area and other parts.” 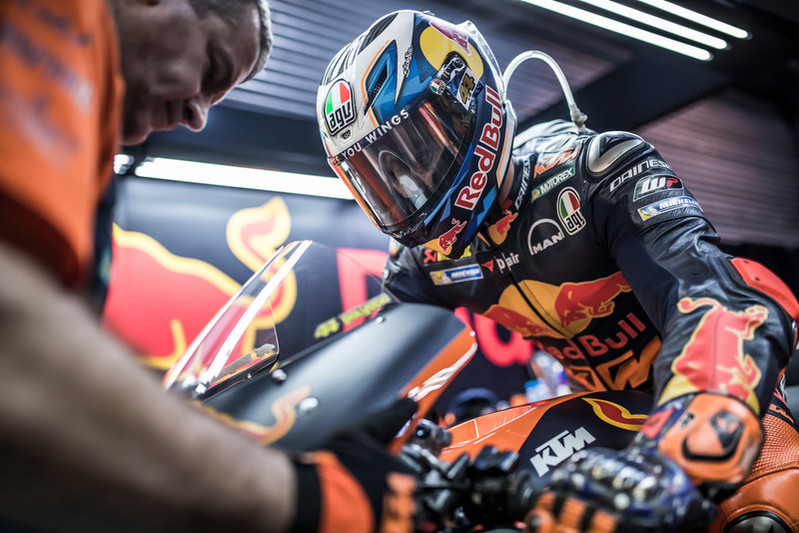 Hardly protection but another part of a rider’s attire for MotoGP™ race distances is a hydration device that nestles in part of the suit’s ‘hump’ and Espargaró is an advocate. It typically holds less than half a liter of fluid and dehydration is not a common problem during a Grand Prix sprint but still a facility for high temperatures (it was almost 34 degrees in Catalunya recently) or humidity. “I was told to get used to it in the morning sessions but I always use it straight away in the race,” Pol says. “For me it important because it keeps you super-cool and helps a lot.”

It is tricky to see where racing protection can step next. Materials will get stronger or last longer and the use of monitory sensors will let experts know exactly the physiological details for a rider during a race weekend. The search for improvement will continue in the hands of people like Alpinestars and Dainese and it can only be fascinating to see what they can come up with in the next ten years and the following generation of Grand Prix.