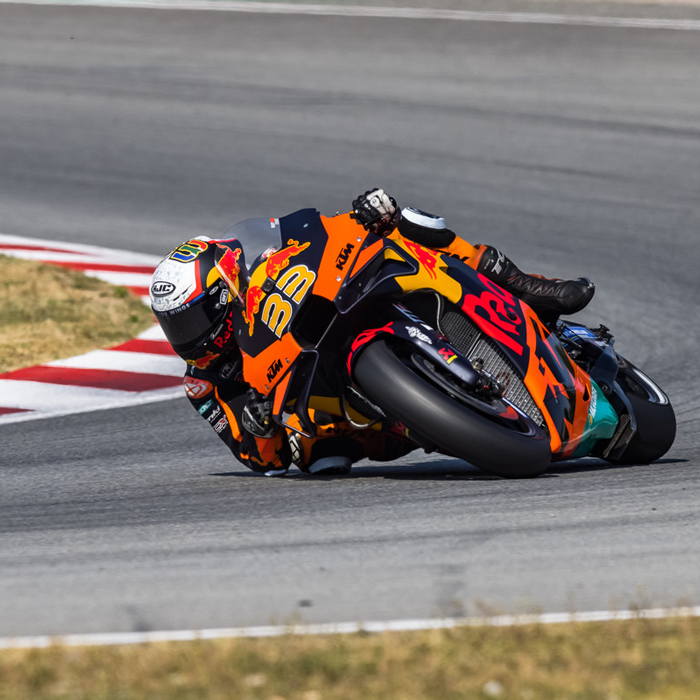 WHAT IT REALLY FEELS LIKE TO GAS A WINNING MOTOGP BIKE

Impossible lean angles and cutting-edge technology help towards one of the biggest rushes on two wheels but what’s it really like to throttle a MotoGP™ bike (and equal the highest ever speed in Grand Prix…)? We asked the Red Bull KTM Factory Racing team for some insight…

OK, forget about the ridiculously tall first gear which means it is very easy to stall a prototype MotoGP race bike and think instead of the custom-made riding position, fat and adhesive Michelin tires and the agility: these are all ingredients geared towards sport performance to help 280hp through a 1000cc V4 powder keg.

Understandably everything on the KTM RC16 is personalised to the riders that need to consistently push it to physical limits and gain tenths of a second. Including the ride by wire throttle. The ‘gas’ itself is more intricate than just a rubbery hand grip and a spring (the amount of rotation is tweaked to preference, “physically it is very light,” says recent Catalan GP winner Miguel Oliveira). Rolling the right wrist backwards unloads a cascade of torque and power but channelling all that potential into a lap-time that doesn’t melt the tires means some careful set-up work.

The Red Bull KTM Factory Racing team will break down a lap and fine-tune the rider’s application of the throttle for each corner, sometimes each sector, for optimum effect.

“The connectivity between the throttle and the rear wheel, taking into account the electronics, changes a lot depending on the grip and if the bike is sliding more, so you’ll then have more traction control,” adds Oliveira. “The feeling changes a bit from track to track.”

“Once the team understands how, why and to what degree the riders wants to open the gas and how much the tire can take then there are many electronic things going on,” reveals Oliveira’s Crew Chief Paul Trevathan. “We play with the torque and traction control levels: what they get with the hand isn’t always what goes to the rear wheel…but we try to make that as close to all the other fundamentals we have on the bike.”

“The rider will come in and say: ‘it feels a bit flat from turns 4 to 5…’ or ‘I can’t control it out of turn 8’,” he adds. “A throttle is the rider’s way of steering the bike. Of making it swap, extend and all the little things that help it get around the track. It’s not just point-and-squirt.”

“It’s super-complicated and I prefer not to know how it all works!” says Brad Binder. “I’ll come into the box and say: ‘I need more power here, less there and more wheelie control here…’ and so on. The same for the amount of engine braking. I never really look at what the bike is doing in detail. I just give my feedback on what I feel.”

“A big key factor with electronics is to try and make it transparent for the rider,” Trevathan states. “You try to let them control the bike with their hand but there are some riders who will say ‘on that part of the track I want to go fully open, and I need the bike to do everything else for me’. It is something less that they have to think about. If they can find that sweet-spot then they can get the bike exactly how they want it.”

Unsurprisingly some circuits are heavier on the throttle than others. The layout and long straight at the Chang International Circuit means a lot of usage, as does the trajectory of the Red Bull Ring, Austria and a course like Twin Ring Motegi in Japan. Other circuits, a great many in fact, don’t allow much throttle abuse! “At somewhere like Jerez the amount of time you are demanding 100% from the engine is measured in seconds, and not that many,” Trevathan says. “It’s quite amazing. The bikes are so fast that when they get to full throttle on the straight it’s already gone! You get shocked by the quantity of full throttle.”

One occasion where riders have the grip wound back is the race start. Thankfully they can count on ‘holeshot’ devices, launch control and traction control. These measures are designed to deliver the maximum controllable performance from the rear wheel while keeping the front end down and stabilising the whole throbbing vehicle powering in a straight line.

Throttles make the bikes go, but the brakes stop the show and the carbon Brembo systems found on the KTM RC16s – indeed the whole grid – are not only extremely effective, robust and costly but they deal with an incredible amount of force. Riders can be coping with 1.5g into some corners while slowing from 350kmph to 95 (as found into the first corner of the Mugello circuit, San Donato) and pumping up to 6kg of pressure into the brake lever.

All of this means the right arm has to cope with some harsh demands. Many MotoGP riders suffer with ‘arm-pump’ and a few even undergo surgery to relieve the ‘blocked’ condition. It all affects how they can interact with the throttle. “The biggest problem when you have arm-pump isn’t opening the throttle but closing it; the movement of rolling off and going to grab the front brake,” Binder says. “I can’t feel the pressure I’m applying too well. That’s the main thing that worries me. The switch to get on the front brake is too slow, too delayed. Then you’re not sure how hard you are pulling the brake. It’s a tricky one.”

MotoGP is the pinnacle of motorcycling road racing thanks to the pace, the technology and the circuits. Those 23 riders on the grid have an extraordinary job. In fact, the time spent on their multi-million Euro motorcycles is relatively limited: outside of the 19 Grands Prix and a handful of official tests. This is why racers are incessantly looking for other ways to train and keep their ‘touch’ and that involves motocross, flat track and even using modified sport bikes for exclusive track days. Once on MotoGP machinery however they are into a privileged world.

“I don’t have anything I can compare it to,” Binder says. “When you fully open the throttle for the first time you think ‘how the hell am I going to do two laps in a row with this thing?’ then you kind of get used to it. It’s ridiculous.”

The South African is now the joint top speed record holder in the history of MotoGP after blazing the radar at Mugello at the end of May. He set a phenomenal 362.4kmph along the main straight in Italy. “I got really good drive and a good slipstream,” he remembers. “I saw the speed and thought ‘jeez’. You don’t feel too much difference between it 20kmph faster or slower but you do really feel it when you hit the brakes. It’s where you tend to notice that extra bit of speed.”

“It was super-cool to see it afterwards,” he adds “and also a reward to team for their work and all the hours, the thousands of hours, on the dyno with the guys back at the factory to get such a strong machine.”

For Oliveira the rush of MotoGP is better appreciated off the bike than on it. “It still amazes me to watch MotoGP outside of the track,” he told us last year. “I think – because we ride the bike many times and we take everything to the limit – then [riding] is not as fascinating as watching it from the fence! Sometimes you still get impressed by the acceleration of the bike when you are onboard but, in general, I think it’s more interesting to watch, and even hear, it trackside: you get a real appreciation for the speed, what we are doing and how we stop the bikes in such a short time; that is pretty amazing.”