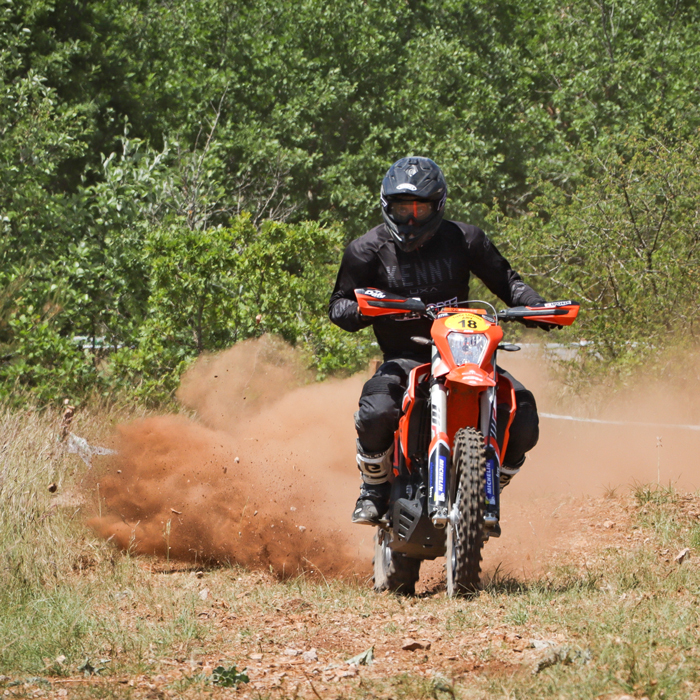 WHEN ONLY THE BIG TOOL WILL DO: ENDURO RACING WITH THE KTM 690 ENDURO R

KTM’s premium dual-sport machine – the KTM 690 ENDURO R – has found a tasty little niche: a gap between those seeking adventure thrills and those that lean more towards Enduro trails rather than the asphalt. Former Dakar stage winner, Xavier De Soultrait, is also showing that the bike is more than capable of holding its own against the stopwatch…

Poised between hardcore Enduro offerings like the KTM 500 and 450 EXC-Fs and more travel orientated options like the KTM 890 ADVENTURE R; the KTM 690 ENDURO R blends power, agility but also stability and comfort to make it a superb machine that easily drifts within the disciplines. KTM’s READY TO RACE mantra is not just a claim, it’s a code. The product line-up is rife with models that can be rolled out of a dealership and straight into a competitive environment and the latest version of the KTM 690 ENDURO R is no different.

Dakar racer Xavier de Soultrait was convinced that the bike had enough sporting prowess to show some of KTM’s real ‘DNA’. He purchased a model from his local dealer and set his eyes on an event he hadn’t tried for some time: the Trefle Lozerien Enduro. “The last time I was very young, I did it with a 50!” the 34-year-old says.

The Trefle Lozerien plays out for three days with over 600 riders and throughout terrain in south, central France, close to Montpellier. Suspended for two years – like many motorsport events – the spectacle blasted back to speed this summer. For Rally expert De Soultrait it was the moment to try something different and to satisfy an inkling he had over the KTM 690 ENDURO R’s potential.

“I bought the KTM 690 ENDURO R two weeks before the race and tested at home, across a flat field,” he says. “I found that I was faster with the 690 than I was with my usual 450. On flat terrain the bike is extremely fast but, of course, when you come to very slow parts with a lot of rocks then the smaller the bike, the easier it is. I was a bit worried about the technical zones of the Trefle but the bike ended up being fine…to be in the top 30 in those parts from over 600 riders was pretty good.”

Despite the length, the Trefle Lozerien is not quite a speedy run. “It’s a typical Enduro but the main difference is that it is run over those three days and across a different track every day,” Xavier describes. “The goal of the organizer is not to have a variety of ground but the first day is normally a bit slower and rocky in the liaison parts. The next two days were slightly faster.”

De Soultrait pushed his way through the specials to eventually place 43rd from almost 600 that classified in the Scratch standings. The KTM 690 ENDURO R was up to the task but where did it excel? “The power: wow,” the Frenchman beams. “On one special test I started in 2nd gear, put it into 3rd and just rode until the end! It was like an automatic bike. It was crazy. I forgot the clutch and the gear lever and just raced. So, the engine is incredibly versatile. Also, the bike is really low maintenance. I don’t need to be changing oil every two days. Nothing to do in the workshop; just change the tyres, put the fuel and away we went. This is very cool.”

The result left de Soultrait wanting more but he took energy from the Trefle experience. “I always want to win but I also needed to be realistic,” he assesses. “I stopped riding Enduro ten years ago and this year was very tricky. I really enjoyed it also. Many people came up to me to say how much they liked seeing the big bike. They were used to see 600s when they were younger. They loved it.”

The Dakar man will now continue to plan with the KTM 690 ENDURO R. There are more French Enduro races coming up as well as some Extreme meetings in the winter. De Soultrait is even eying Rally outings in Morocco and possibly Turkey. “I believe we can do a good job with this bike,” he claims.

Xavier has tasted the competitive side of the KTM 690 ENDURO R. He has explored the limits of the motorcycle. This means he is also ready to ‘explore’ in other ways. “It seems that everybody wants an Adventure bike these days,” he says “but this KTM does everything. For me this is THE bike.”

The experience has been well documented – see video below:

Make sure to also follow Xavier de Soultrait on Instagam and watch him complete THE WORLD ADVENTURE WEEK challenges.