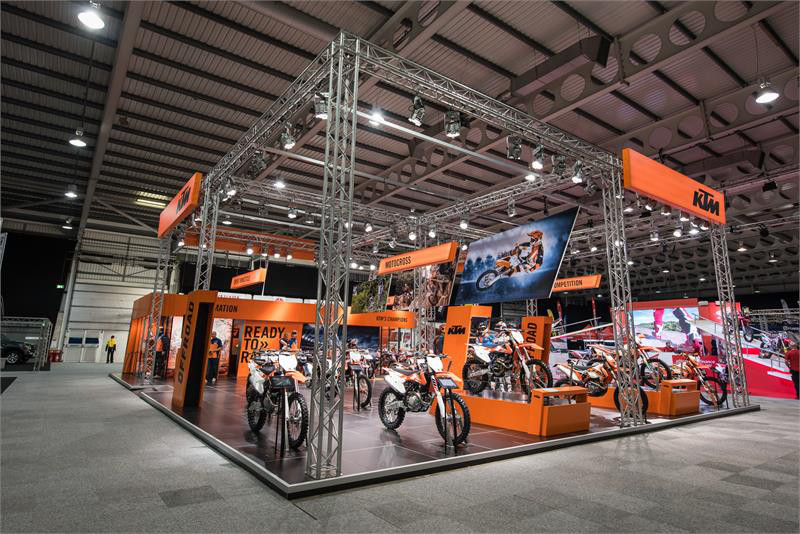 Where the mud stops: Offroad indoor

The International Dirt Bike Show is an annual gathering of everything new and shiny in the offroad world and is a rare instance of a ‘salon’ dedicated to a single sphere of motorcycling. We went along to the event in the UK to see just how essential this type of exhibition actually is.

It’s busy. In the depth of England’s midlands the Stoneleigh Park facility (a curiously low-key and dispersed collection of offices, buildings and stables) just outside the town of Warwick houses a haphazard trail of cars. It’s Thursday and the first day of the 2015 International Dirt Bike Show and as we roll-in late morning to try and find a spot to park among the small avenues people are already emerging from the modest exhibition halls with large plastic carrier bags and boxes of riding gear. Clearly this is a hotspot to grab a bargain. 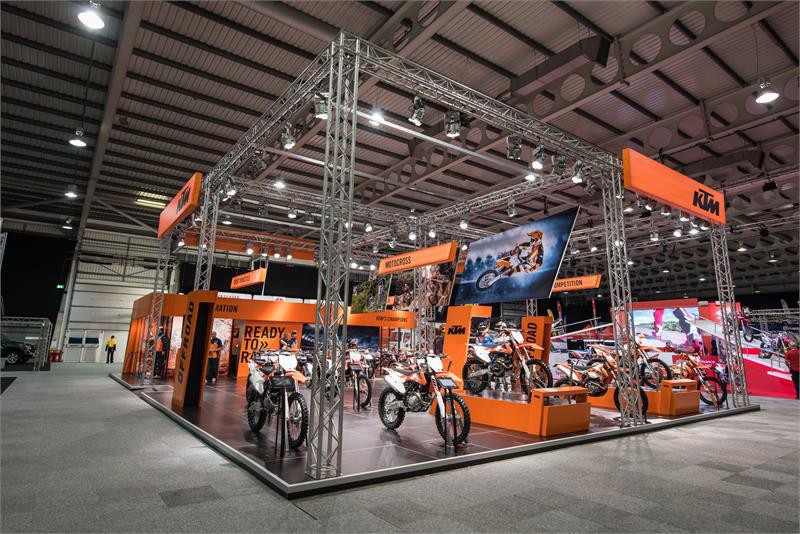 Inside and past the principal entrance where the tickets are reasonably priced (16 pounds – 20 euros – for adults but noticeably cheaper if brought in advance) the show is already at an impressive throb. The glitzy stands from virtually all the bike manufacturers hoist desirable 2016 machinery into lights and fixed for people to ‘throw a leg over’ (KTM tussle with Husqvarna for the billing of biggest and brightest) occupy one hall, companies, brands, distributors, minor fabricators, publishers, collectors fill another two while the hum of distant bikes indicates there is some riding going on somewhere. Around 25,000 people are expected to meander around Stoneleigh at some point through the four days of its residence and for the UK at least it is a key date in the offroad calendar. The presence of many youngsters indicate some scheduling fortune with the show’s dates falling in the midst of most schools’ half-term holidays. There is a discernible spread of demographic. From children and new riders, to race fans to young men and women obviously emerged in the scene, mature riders, industry personnel and a notable presence of families; an unusual sight at a motorcycle show.

We corner event organizer for the past three years and former racer Nick Mowbray for an assessment of how the ‘IDBS’ is shaping up during the second decade of the century, and what he is aiming to offer the public to capture their attention only a month before Britain’s biggest motorcycle outpouring at the nearby NEC in Birmingham. “When we took control three years ago we looked at different ways of running the show, like bringing entertainment as part of the program. There used to be three halls … and that was it. Now we have Dougie Lampkin doing his Trials, Minicross, radio controlled cars and zones where kids can try bikes for the first time. It is a family event and you can see three different generations here; kids starting on a 50cc bike to granddad that is looking at the Classics section.” 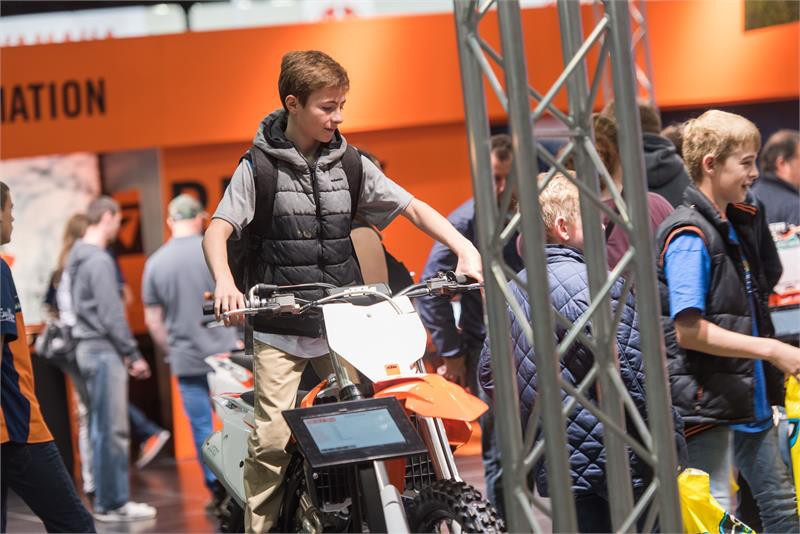 The ‘active’ area is eye-opening. A Minibike Supercross track, a Honda-backed ‘first go’ zone, and a junior quad layout mean that kids can skip all the exhibition stalls and halls and spend time discovering bikes and associated fun. It explains the attendance of the families and is another dimension aside from seeing and ‘trying’ the new SX-Fs and meeting racing heroes like Shaun Simpson, Tommy Searle and John McGuinness. 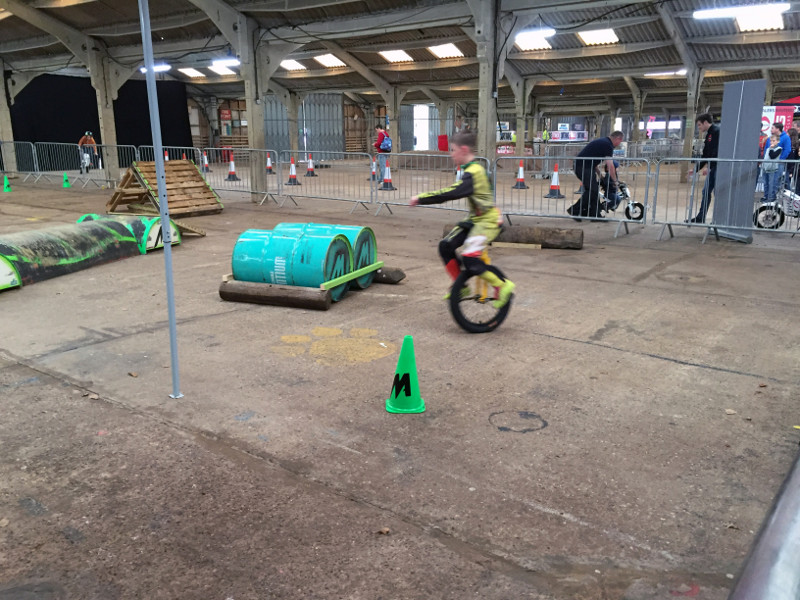 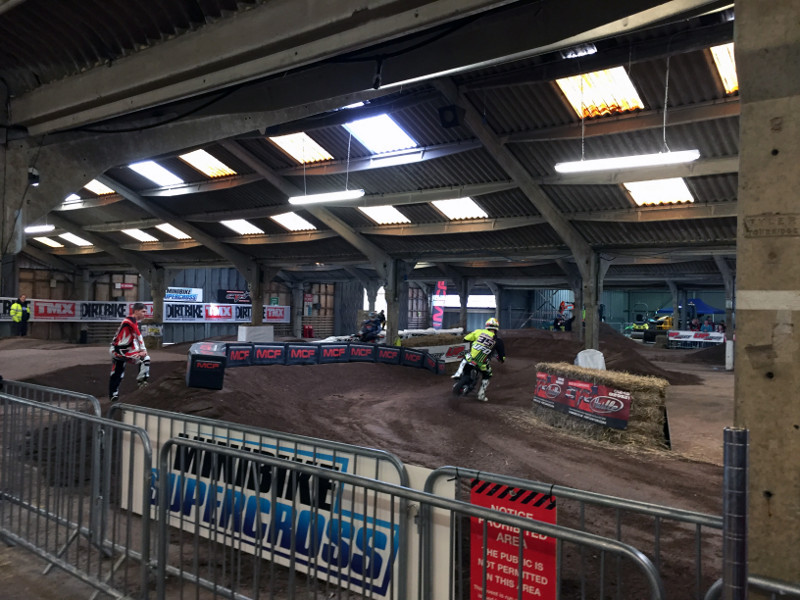 “I feel we have the mix right and it is working well,” Mowbray continues. “Stand sale has gone bigger and better. All the key brands are here. We want to keep the event pure and what it is related to. I think we need to do a bit more on the Trial side because it is very Motocross focussed at the moment. It does feel that the industry is getting strong and the ‘in’ thing at the moment seems to be adventure weekends away. I was speaking with the ACU [British Federation] this morning and license applications are up over 5%, so there are small signs that things are looking positive.”

Mowbray says that visitor and exhibitor numbers are slowly increasing every year and the uniqueness of the IDBS is a contributing factor. “If you start having too many shows then you just end up diluting what people want,” he says. Motorcycles, generally, might have INTERMOT, EICMA, Paris and the NEC but dirt bikes have Stoneleigh. While the venue itself has a disjointed and rural charm that somehow befits the earthy roots of IDBS you cannot help but imagine if the show could be housed in a bigger, more illustrious site one day. Mowbray is forceful in his belief and reasoning for the event to stay put. “I think the location is fantastic,” he asserts. “It is very central [in the UK]. People have asked us “why not look at the NEC?” but we’ve found the showground here very accommodating and easy to work. Moving to the NEC suddenly means a car parking charge, which is not something people like to pay. There are still possibilities here and refurbishments planned. Long term there is talk of a stadium being built and if that happens then we can start talking with federations for some indoor Motocross event. We’ll see.” 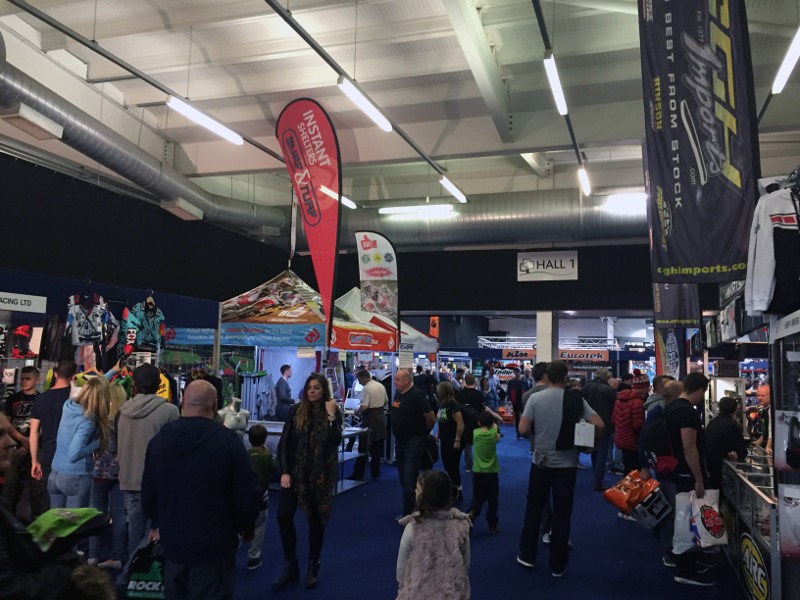 For now the reception on the opening day of the International Dirt Bike Show indicates that the future and format is encouraging. In 2014 the organizers saw an 11% climb in public through the door. They are set for another increase for ’15. There is just enough to see, do, try, buy and finally walk away from after a half a day visit to feel satisfied with what was on offer. EICMA, in comparison, can be daunting and exhausting and almost impossible to fully comprehend in one day. The IDBS serves this particular niche of motorcycling well and above all it is reassuring to see offroad with such vibrancy away from a track or trail.

92 Responses to Where the mud stops: Offroad indoor