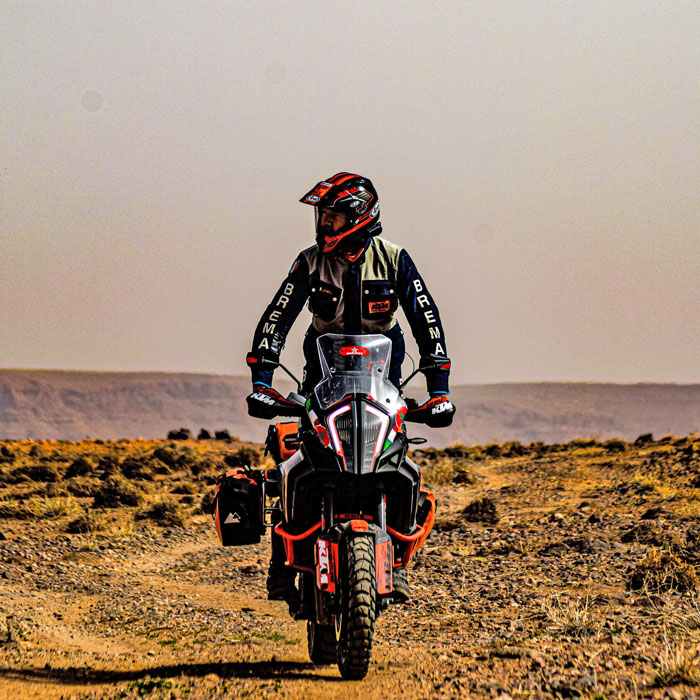 WHY MOROCCO IS A BIKE RIDING PARADISE

The first time you see Morocco, you’re shocked by the colors, the smells, the infinite beauty of the astonishing nature and the ancient culture of an extraordinary nation. Morocco is the gateway to Africa and one of the best places in the world to ride a bike. As a country, it indulges in all its splendor leaving you breathless from the very first moment.

When I landed in Morocco, disembarking in Tangier, the enthusiasm was unimaginable and I was purely excited that finally I’d be able to spend some proper time riding across a country that intrigued me so much in my previous visits, unfortunately only for a few days in the past.

I spent the first weeks on the north coast, arriving at the Spanish enclave of Melilla and all the hinterland around, and then pushing myself in and starting to descend, always following a sort of zigzag that very often brought me back to the same roads. The north of the country is incredibly beautiful, perfect roads that are inserted through an infinite number of hills with unique colors and scents. Contrary to most European countries, in Morocco you can ride a bike in the furthest or most extreme offroad tracks without many restrictions.

The KTM 1290 SUPER ADVENTURE S dances between the endless curves and the kilometers slip under its adventure-specced tires until we reach Fes, the walled city of the north; Fes is considered the cultural capital of the country. It is most famous for the Fes El Bali, the fortified Medina, and the classic Souk market, a must-see for all visitors. I have the feeling of being in the past, overwhelmed by the wonderful chaos of the historic center.

I almost always sleep in small family-run hostels where I get the chance to have dinner with the host family. It happens that I now have the traditional Moroccan tea with me, which I have also learned how to serve. Traveling through some offroad paths in the Small Atlas area, I met a travel companion, Saad, a local Moroccan biker. Saad was very helpful and willing to give me lots of advice on local cultures.

We rode together quite a bit and spent a few wonderful days. The next day we got lost in an offroad track in the middle of nowhere. The sun was already down and we were still trying to find signs of civilization. Eventually, we found a Berber family in deep darkness and they hosted us in their humble home. Like all crazy stories, this one helped create some good memories that I’ll never forget. Our host family treated us like kings and I was impressed by the colors of their eyes; eyes so deep that seemed they were coming from another era.

Soon after, I headed to the elegant Rabat, the capital, the main seat of the King of Morocco, and then went down to Casablanca where I got the opportunity to do a general bike check at the KTM dealer. Typical for all KTM dealers, I am welcomed as family. I decided to take a few days off and treat myself to a hotel with a SPA. That’s what life is all about. The next day, my bike was all washed, serviced, and ready to go.

I headed towards Meknes, another pearl, where a biker friend took me around the Medina (the old part of the city) even on the bike, doing a crazy slalom among the thousands of people who flock to go to the market. But this is Morocco. After a couple of days I finally left for one of the wonders of the world, the Atlas. It is indescribable, a huge and very long mountain range, with every type of road, from the asphalt to the gravel roads to the mule tracks. There is something for every taste. At the highest points I also found snow. At this point, I wish I had a lighter EXC to play around.

I stop to eat along the way, always at restaurants in small villages where a lunch of tagine costs 5 or 6 Euro. The food is delicious, and I already have an addiction to “tefarnut”, the Berber bread. Guys, you have to try this one. It’s pretty common in this area to meet other bikers and I sometimes cover a few kilometers or even a day riding with them. The next morning we always promise to meet and ride again, but we both know that’s usually a lie. You never meet with these bikers again, and this is one of the prices you have to pay when traveling alone full time.

Later on, I spent a few days in Chefchaouen, not just a city but a miracle. It is truly one of the most beautiful cities in northern Morocco, and probably in all of Morocco. Nestled at the foot of the rugged Rif Mountains, it’s a cascade of blue-walled houses harmoniously set in a stunning natural landscape. A paradise for photographers. The Atlas mountain range left all its beauty in my heart, despite a few scratches following a couple of hurtless crashes in the offroad parts. I’m definitely in love with Morocco.

The road of the casbahs

As the days went by, I visited the Merzouga desert where I enjoyed the sand dunes with a small little buggy I rented on the spot. Lots of new friends here too and unforgettable dinners. Moroccans, when you get to know them a little, you can’t help but love them. They are sunny, happy, and friendly beyond all measure.

Here I am in Marrakech. Once an imperial city in Western Morocco, it is the city of mosques, palaces and gardens. The Medina is something incredible, a fortified medieval citadel that dates back to the times of the Berber Empire. Chaotic beyond belief. A crowded labyrinth with various souks, where practically everything can be sold or bought. Marrakech is also visible from a great distance and the Moorish minaret of the 12th century Koutoubia mosque is considered one of the symbols of the city. Just beautiful.

Leaving behind the snow-capped mountains of the Moroccan Atlas, the landscape changes and the African charm multiplies in the canyons, palm groves, waterfalls and desert valleys crowned by the many Kasbahs. I can’t stop taking pictures, the succession of landscapes takes my breath away. The road of a thousand Kasbahs starts from Marrakech and passing through Ouarzazate arrives in Zagora or the village of M’Hamid, the last oasis before the infinite expanse of sand and dunes of the Sahara. I feel like I’m living a dream.

At every village I am greeted by restaurant employees who wave their arms (yes they literally do it) and invite me to take a seat in their restaurant. It is always difficult to choose one so as not to do another wrong. But they look at you and just smile and say “you will come here next time, inshallah”. I love this country of a thousand contradictions.

The thousand kasbah road retraces the route marked by the caravans that went from Morocco to Sudan and Mali. I travel all over it and along the way I meet other bike travelers with whom I share a couple of days on the way. My 1290 doesn’t miss a beat and it doesn’t give me any problems, I love this bike.

I zigzag through the country, stopping for two days here and two days there, the weeks fly by. Sometimes I camp, sometimes I sleep just under the sky looking the same stars I saw in the dark nights in Patagonia, In Ireland or in Idaho. Sleeping under the sky is priceless.

I finally arrive in Agadir where I decide to stay for a month, I take an apartment and enjoy that part of Morocco that I will later discover to be my favorite.

The tagines, the tefarnout bread, the tea, the medinas, the mountains, the pristine lakes, the deserts. The breathtaking landscapes and the many friends I now have in this country.

I don’t know how to describe the feelings that a bike traveler can feel in Morocco. It’s an extraordinary country, very safe and wonderful, certainly with its contradictions and its shortcomings. But it is among the most beautiful places I have seen in my life and believe me when I say I’ve seen some.

If Morocco isn’t among your future riding destinations, you better make sure you make it.

31 Responses to WHY MOROCCO IS A BIKE RIDING PARADISE