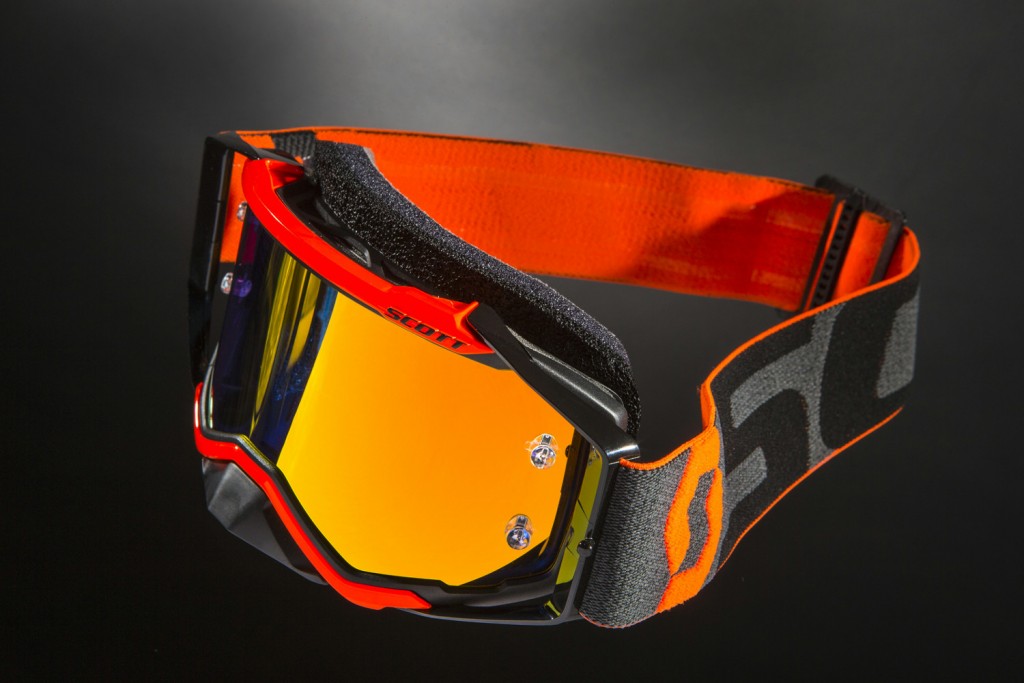 Window to the world: Goggles

Even something as rudimentary as a pair of goggles can sweep along with the march of motorcycle technology. We dip into how this essential piece of riding kit should not be ignored …

It’s kinda important to see where you are going. Anyone who has ridden offroad will tell you that it can get messy. It can also be dangerous. Riding behind a friend or competitor – from a beginner to a Grand Prix star – will still mean innocuous roots or stones come flying out of nowhere. Tree branches, dust, even insects; there is a plethora of animate and inanimate objects just waiting to ruin your ride and eyesight. 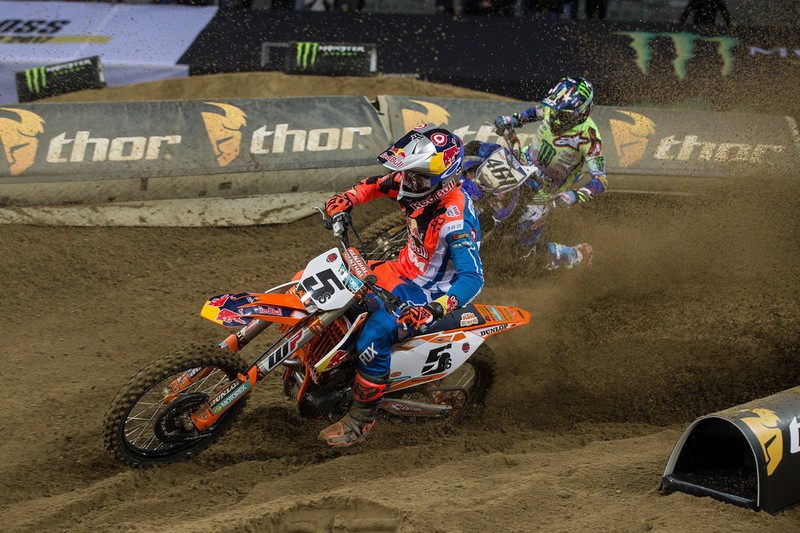 Simply staring at a new dirt bike in 2016 reveals a staunch level of technical evolution and clever minds have also been observational when it comes to riding kit. Companies like 6D and Leatt are addressing rotational acceleration and brain injury with their helmets. Firms like Fox have developed high-performing garments (Flexair responds to the rider’s physique and demands, the Legion enduro line is super-resistant thanks to a link with Cordura). Alpinestars continue to lead the market for a safe, practical (and cool) line of boots. When it comes to goggles the rider has not been neglected.

Take a brand new pair out of any box from specialists like Scott Sports, 100%, Oakley, EKS, Pro Grip and Spy (or even more radical offerings from the likes of Dragon with the huge lens and Liquid Image with their built-in camera and WIFI) and the progress made in this field is evident.

Perhaps the first thing you will notice will be the strength of the colored or mirrored lens, often coated in a solution to prevent ‘fogging’ and in the case of Scott Sports passing a bullet test of resistance. It involves firing a 3mm steel ball from a Co2 laser-guided gun at 112 meters per second; more than double the norm for street helmet visors. 100% take pride in the fact that their lenses are interchangeable and compatible across the wide breadth of their range. Oakley forge their premium Airbrake models with plutonite. Maybe you see the strength of the strap (most now boasting a sticky silicone inner strip to ‘grip’ the helmet better) or the construction of the frame allowing air to filter in and keep almost everything else out? Frame strength, weight, flexibility (we’ve seen a pair of EKS goggles folded back on themselves and twisted around), form, fit (they need a universal shape to accommodate any crash helmet), dimensions (smaller is better? Or more fragile?) and even consideration for ventilation and individual’s faces (Scott old Tyrant goggle featured a ‘plug’ set-up for more airflow and also a patented ‘FIT’ system where simply turning two small screws on the goggle would permit customization to the rider’s mug) are part of the design thinking.

What else? Undoubtedly the dense triple layer foam is a big move forward with the sponge actively working to absorb and contain moisture and still provide comfort. That pack of laminate tear-offs was a game changer in the last decade but is now facing an environmental backlash. Lastly, how about the blend of colors? Do they sync well with the rest of the gear and even the bike?

It is all a far cry from the days of Perspex lenses and leather straps; a motocross goggle looking like a prop cast-off from a second world war aviation film.

At the Grand Prix of Belgium at Lommel, round fourteen of the MXGP FIM Motocross World Championship this summer, Scott Sports (who, oddly enough, manufacturer the majority of their goggles several kilometers away from KTM’s factory lines in Mattighofen) made a detailed presentation on their new ‘Prospect’ that has only just become available in dealers and stores. The American/Swiss experts have almost half a century of experience in creating eyewear for offroad and wintersports (the Red Bull F1 team allegedly use a version of their snow goggles for pit stops) and have previously been market leaders. They claimed that the Prospect represented a new benchmark that was almost three years in the making. 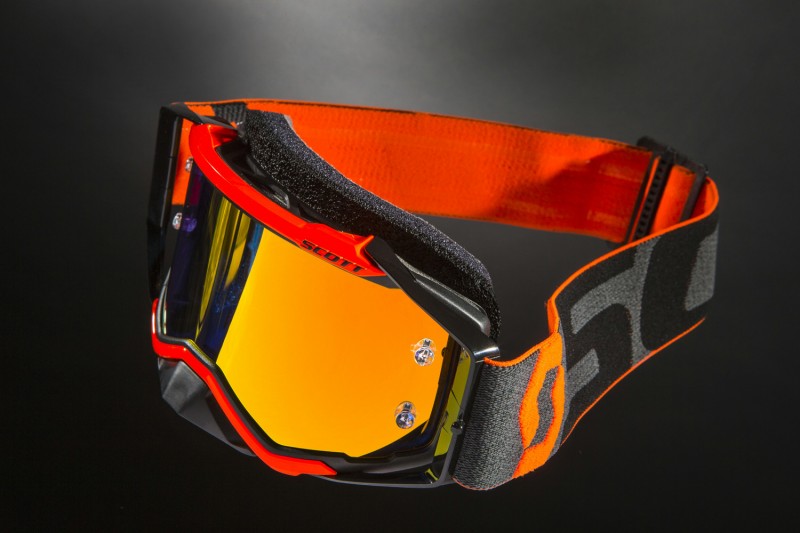 “Our main goal was to reach the largest field of vision, so we looked at everything we could do to achieve that; not only the lens but also the thicknesses and dimensions. It was a big commitment,” says Chief Engineer of the Scott Sports Division Bertrand Didier. “We knew it had to be a new high-end product. We couldn’t just do ‘the usual’ upgrades. We had to think ‘out of the box’ and I don’t think there is anything on the Prospect that compares with our other goggles. Face fit, lens shape, strap, lens lock; all these things are different.”

“The big step for goggles in the last ten years revolved around fit elements, so things like three layer foam and other material that we actually implemented like Thermofoam and then sweat reduction through barriers and evolution with the thickness,” he says. “Lens’ colors did not change a lot, neither did fit integration with helmets because something like that has to stay general. So lens retention and field of vision were the big targets.”

This is where the Prospect hits home by providing the largest view (increasingly lens height and curvature while slimming the frame) and a four-pin lens lock system that is unlike anything else and offers that key safety factor. At a 100 euro price mark it lands at the upper end of the budget scale but still doesn’t trouble the Oakley Airbrake MX.

Roaming the rest of the dealer shelves and it is clear that 100% have a sharp eye for styling and their Forecast roll-off system is practically level with Scott for wideness. Oakley are still the biggest mainstream player in the game. There is plenty of choice and a wide price spectrum but the importance of goggles should not be underestimated. “I do think that goggles can cost you a race win or good result,” opines double British Champion and MXGP winner Shaun Simpson. “I would say 99% of goggle failure is through bad prep or unless a lens pops out. If you are eating roost from someone the whole moto you need to be able to see where you are going!” 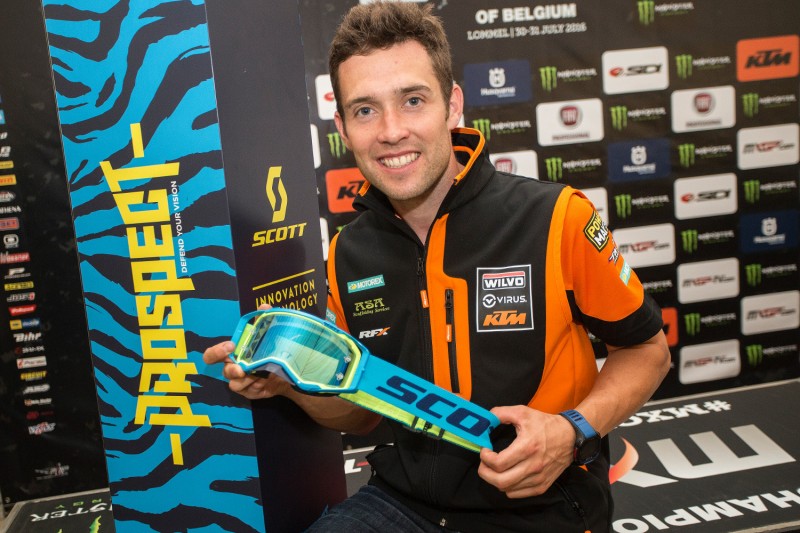 Effective and stylish eyewear is not solely in the domain of the dirt. Any number of vintage shops or even a quick look online will house options for the old leather based goggle for vintage fans or custom motorcycle riders looking for that extra edge of panache. 100% also caught the eye in 2014 when they launched ‘The Barstow’; essentially a goggle with venting, three layer foam, a spare lens and all the comforts and practicalities associated with a functional offroad product but with the styling to suit any full or three/quarter or half lid for the street. It caused a stir and the five different designs available eventually led to collaborations, one of which with custom giants Deus Ex Machina.

Where can goggles move in the future? Former FIM Motocross World Championship runner-up, twice in Red Bull KTM colors, Tommy Searle, claims that innovation moves a little slower than most people would think. “It seems that every five years there is a significant change with goggles; I’d say I’ve seen two big major developments in my time,” Searle says. “So you don’t tend to notice it too much but then someone will come with a big step forward like 100% with their Forecast roll-offs and then the other companies catch up.”

With advancing methods of GPS and data recording (the Lucas Oil AMA Pro National Motocross Championship used a system called LITPro to transmit the riders’ and motorcycles’ data onto TV screens a la F1 style this season for the first time) there have been questions about whether goggles could eventually house a heads-up information display (something already tried by Scott for the winter goggles) but there is skepticism in the motocross paddock about the value and practicalities of such a provision. The likelihood is that development and progress will focus more on rigidity and performance (polarized lenses and more strength) and more value for your buck with the recent trend of high-end wares. Then again who knows how far these optical specialists can really see ahead?

101 Responses to Window to the world: Goggles