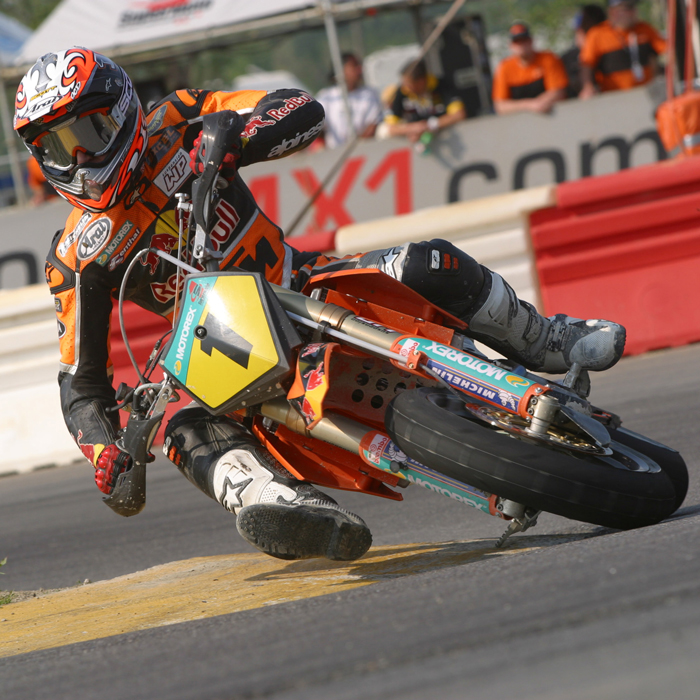 WORDS FROM A SUPERMOTO MAESTRO

The arrival of the new KTM 450 SMR prompted us to ask for some recollections from a star rider that helped KTM discover how to make a desirable track tool.

Thierry van den Bosch has a job that revolves around his first love. In 2020 the slight 46-year old Frenchman can be found in the MXGP paddock training and advising up and coming French talents that compete in the MX2 class. He also has a key role with the French Federation.

Van den Bosch might feel a strong natural pull to the dirt but it was on the mix of asphalt-and-soil and in the world of Supermoto where he became an international star name. Back in 2002 the multi-title winner in France (and at European level) used the initial experimental versions of KTM’s technology in the discipline to win the very first FIM Supermoto World Championship. Van Den Bosch’s work provided the maiden steps towards the eventual genes of the 2021 KTM 450 SMR.

“I arrived in Supermoto at the right moment,” he smiles now at the memory. “I was not that successful with my motocross career but when I started in Supermoto it basically involved motocross bikes on asphalt with a big brake and slick tires! When I came into KTM they made a big effort to create the right bike. They made a new steering angle with offset and we could lift or drop the rear, we had a full-spec LC4 engine with carbon. I did a lot of testing and it was very interesting. I really liked that development.”

Van den Bosch and KTM dominated the first season in 2002, winning every race bar one as Supermoto then started to boom in popularity. The FIM series became bigger and better both in terms of dates, participants and interest from factories. Even the American X-Games series started to run a Supermoto event. Van Den Bosch considered his job done in 2002, tried a season of road racing in 2003 where he was struck by mechanical issues and injury and then returned to the KTM Supermoto fold for 2004. Again, the combination was successful as the sport continued to morph.

“The biggest change I noticed was the move away from Supermoto being ‘a show’,” he recalls. “We used to slide a lot, do stoppies and put on a display. Year after year we became more efficient, we slid less, and stunt riders started to become popular! Doing things like wheelies with your feet on the seat was not that impressive in Supermoto anymore! It had really started to change by 2004-2005. It became more serious.”

Van den Bosch again clocked the testing mileage with KTM technicians. “The KTM was a bike that, as standard, you could already go very fast. It was also quite simple but also quite technical,” he says. “It got to a point where the frame was specially made for Supermoto, it wasn’t some hangover from motocross. We changed the rigidity. We also made many alterations from one track to another. It wasn’t like motocross where you have a consistent technical base; we were entering the spirit of road racing and were optimizing the bike to be very fast. If you look at the geometry of the last generations then it was getting closer to a road race bike. Tires were also important and when Michelin entered the world championship we did more testing. We had qualifying tires! It came from being a very amateur sport to being quite professional with a lot of technique.”

Van den Bosch claimed his second FIM gold medal in 2004 and cites the achievement as one of the best of his career. “In 2004 I had a health problem at the beginning of the season, it was very tiring to race but I slowly got better. I came back to KTM, back to the sport and took the red plate.”

KTM officially ceased their Supermoto racing program in 2005 even if their fondness for the race bike, the SMR and the LC4/690 versions remained part of the product portfolio. The FIM World Championship and some of the bigger international dates saw the sport stutter in terms of support. It was a victim of its own high rate of professionalism and the aspirations of the riders involved. “It became costly,” Van Den Bosch explains “and then the 2008 economic crisis was bad timing.”

Supermoto adapted, even though the FIM world championship did pass through the hands of different promoters and a bewildering process of rebranding and relabeling of the categories and refinement of the technical regulations.

Outside of the competition world there is a wide community of riders that love the feeling of precision, drifting and speed across tarmac venues and kart tracks on a specialized machine. Supermoto is quite visual through the social media channels of MotoGP™ racers. “Road race guys are very fast in Supermoto; I think that’s natural,” Van Den Bosch says. “I think they need to have this type of training. It’s quite easy for them to do. The bike is not high maintenance; you can go to a kart track and if you crash then the repair bill is not like a road race bike! Even with used tires you can have fun. It’s efficient training.”

What about the man himself? Van Den Bosch might spend most of his time thinking about motocross and steering the next generation of French talents but suiting up for a Supermoto blast is never a chore. “It’s not very often,” he smiles again “but I don’t need to ride that often to have a good feeling and feel fast.”