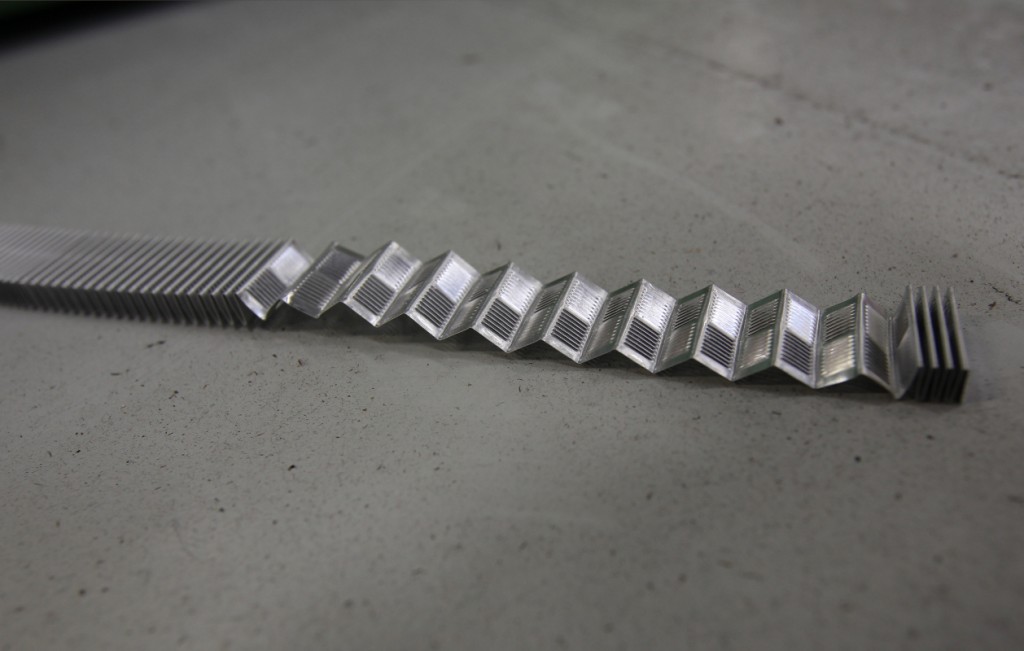 Aircooled motorcycles are hard to find these days. The current KTM model range features not a single one. All motorcycles manufactured in Mattighofen are equipped with a watercooled radiator, sometimes even with two and quite often there is an oil cooler in addition.

All radiators, that are mounted on a bike during the final assembly at KTM, are manufactured at WP Performance Systems, located in Munderfing a small town near to Mattighofen. Like the KTM-Sportmotorcycle AG, WP Performance Systems is part of the comprehensive holding company Cross Industries AG, although WP operates completely independent. 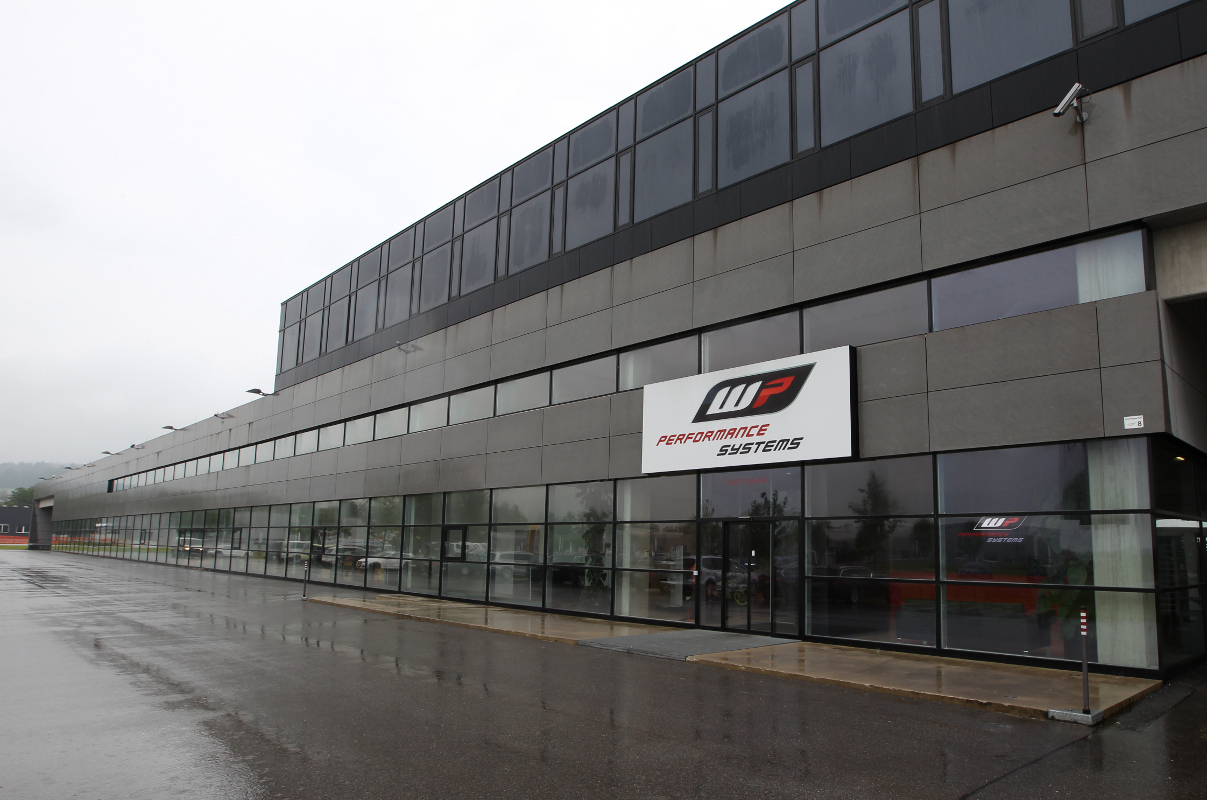 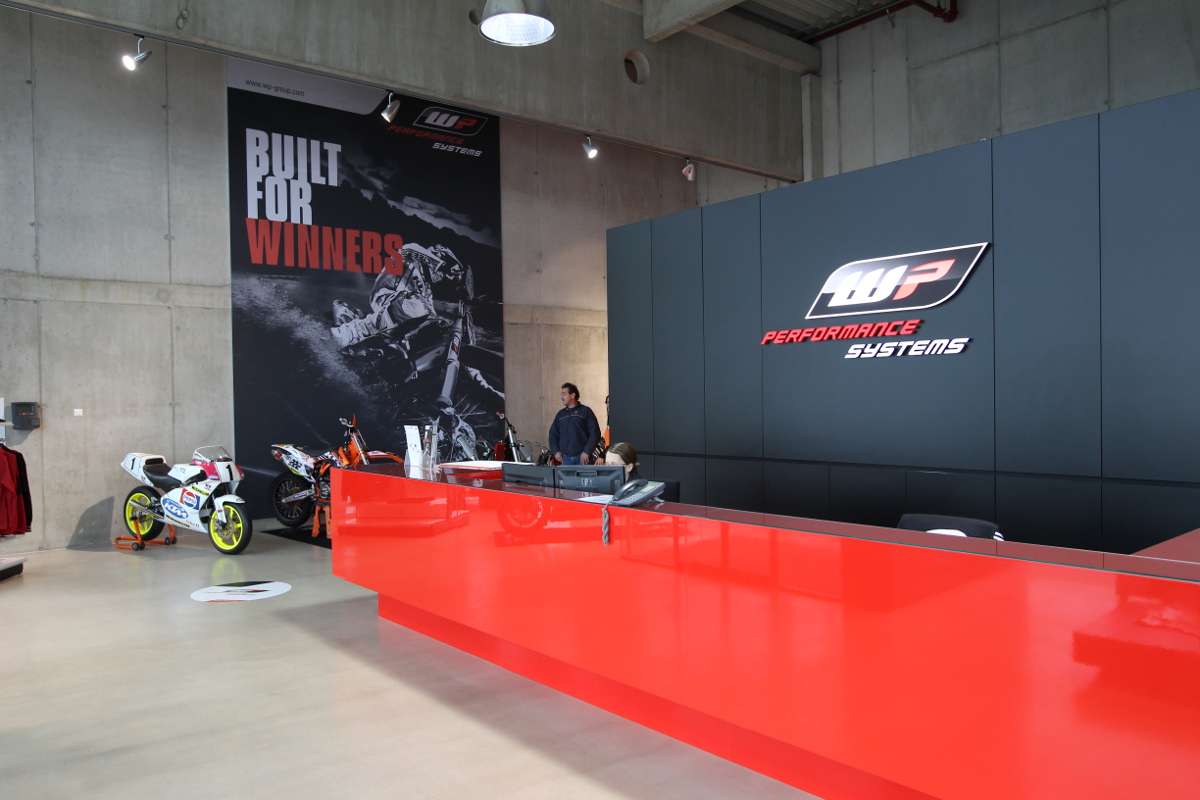 WP Performance Systems is located in a huge and recently constructed building. In addition to radiators, forks and shock absorbers are also produced at WP. Furthermore, the WP business comprises the construction of exhaust systems, which is outsourced to a building in Mattighofen. The KTM engine plant, the KTM racing department “KTM Factory Racing” as well as the KTM FREERIDE E E-CROSS CENTER are located in close proximity to the WP building – the proximity to orange activities is quite obvious.

The radiator production occupies around one third of the WP production site. Every year, around 100 employees produce 300,000 radiators available in all specifications. Almost half of them are mounted at KTM and Husqvarna bikes. The others are shipped to customers all over the world: BMW in Germany, Triumph in England, Ducati, MV Augusta and Benelli in Italy. Even the American quad bike manufacturer Polaris is among the customers.

Every year, around 100 employees produce 300,000 radiators available in all specifications.

Others are exclusive car manufacturers like Bentley, Lamborghini, Ferrari and Audi, that obtains its oil cooler for the R8 super sports car from WP. And last but not least, the KTM X-BOW´s water cooler, a very special, trapeze-shaped construction with two radiators in a row, is produced at WP in Munderfing.

Water and oil coolers are made from aluminum. On the one hand because of the good thermoconductivity, on the other hand because of the low weight. A radiator core always consists of tubes and fins, which are placed one above the other, as well as lateral tanks. In the final assembly the radiators are completed with mounting parts like lid, fan, thermostat or brackets. There are endless possibilities regarding dimension and shape – small, big, straight, bent, rectangular or V-shaped. The most compact radiators are produced for the KTM 50 SX bike, the biggest for the Triumph Rocket 3 bikes. 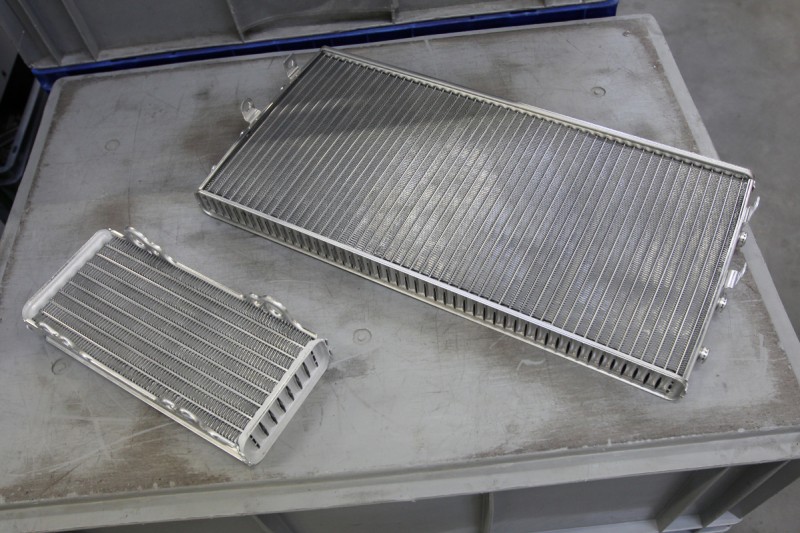 At the beginning, the radiator production seems like a puzzle. Several aluminum raw material parts have to be squared – various techniques are applied: cutting, blanking, drilling, bending, deep-drawing, hemming, grouting and flaring. Although there are used many machines during the manufacturing process, there is still a lot of manual work while processing the parts. 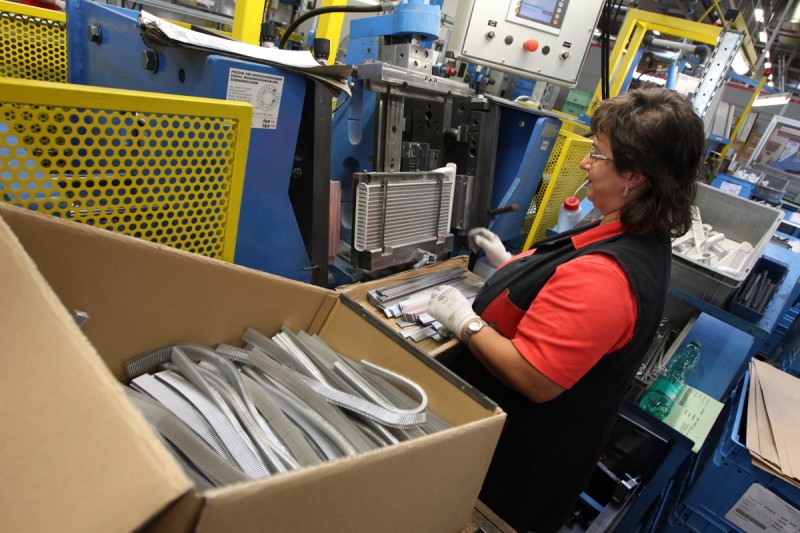 The cooling fins are either externally supplied or manufactured on-site. With 0,15mm the aluminum strap is so fine, that it could be cut with paper scissors; therefore a special machine is needed to process the wispy strap. The aluminum strap is guided through several rollers to be finally folded like a concertina. When stretching the fins one can see especially made, tiny openings looking like gills, which help the airstream to dissipate the heat more efficient. Inside of the radiator the fins are placed between the hydrophilic tubes and soldered with them. It is the best way to dissipate the heat within the tubes and cool the water. 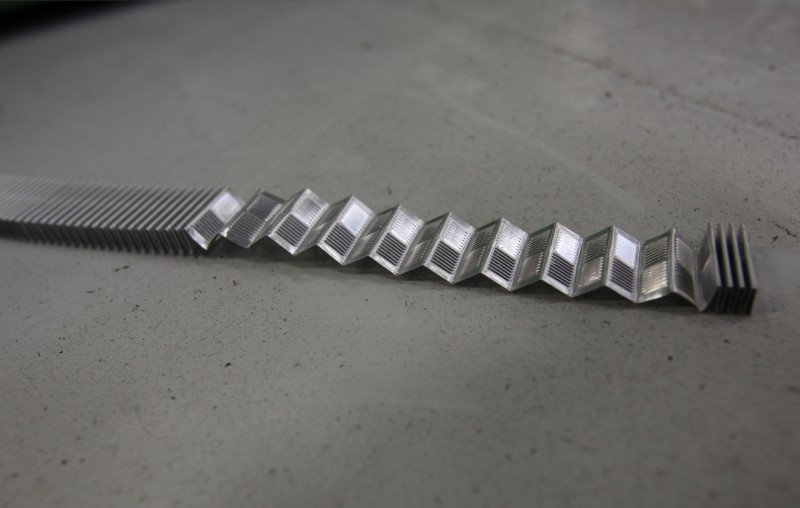 All needed parts are cleaned in two wash systems in order to guarantee that all parts reach the soldering furnace as clean as possible. Either the work pieces are degreased with hydrocarbon or treated with acid. Thereby, the surface becomes rougher and the soldered connection is better.

When all parts are prepared the radiators are finally assembled at certain slots. Depending on the construction type several layers of tubes and fins are placed one above the other and completed with lateral tanks and various brackets. Special rails  keep the radiators together like a corset and under slight tension in order to ensure that the specified size and the desired shape are retained while soldering. Afterwards the rails are removed. 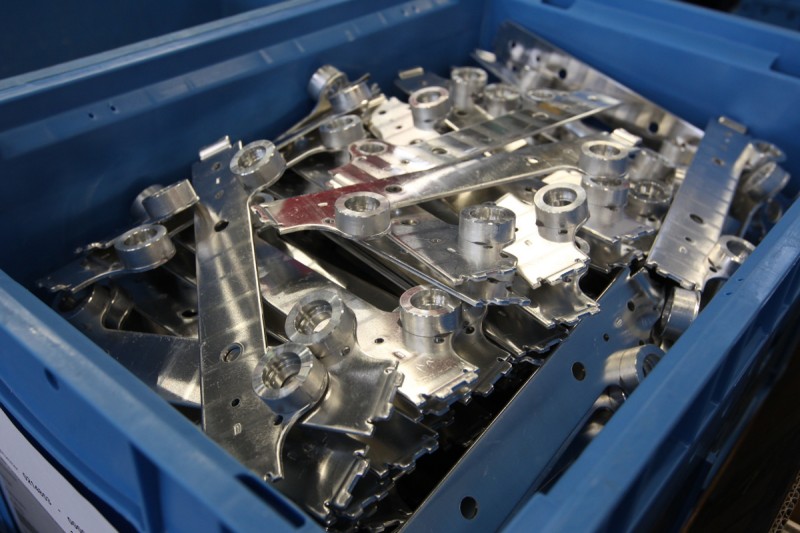 Oil coolers differ slightly from water coolers, since they have to endure higher pressures. Usually, the oil-bearing tubes are not round, but consist of two flat half shells, in which are introduced so called “turbulences” in addition. These are slender aluminum grids that specifically decelerate the oil flow, whereby the cooling effect is improved and has a stiffening effect that increases the compressive strength. 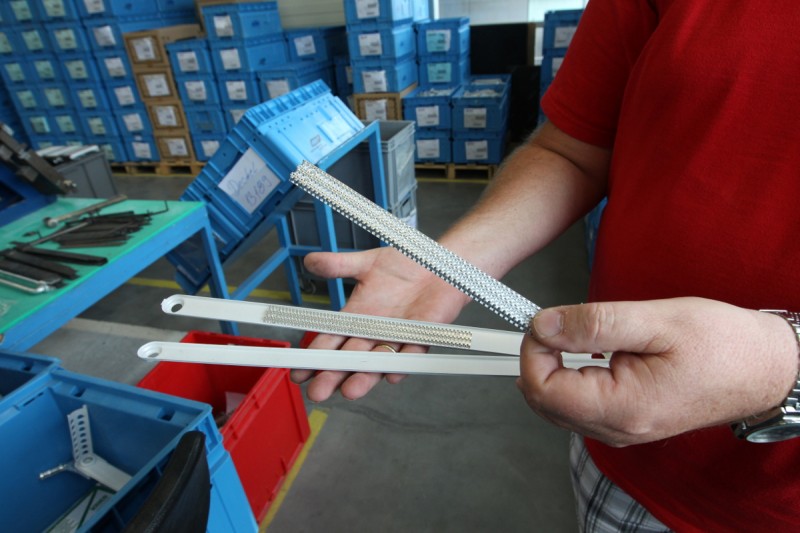 On a conveyor all radiators finally pass through a soldering furnace, a tremendous plant of approximately 60m. There the radiators are sprinkled with a flux before the actual soldering process. All parts that are assembled so far, have already received a one or two sided soldered layer in different thicknesses during the aluminum production. 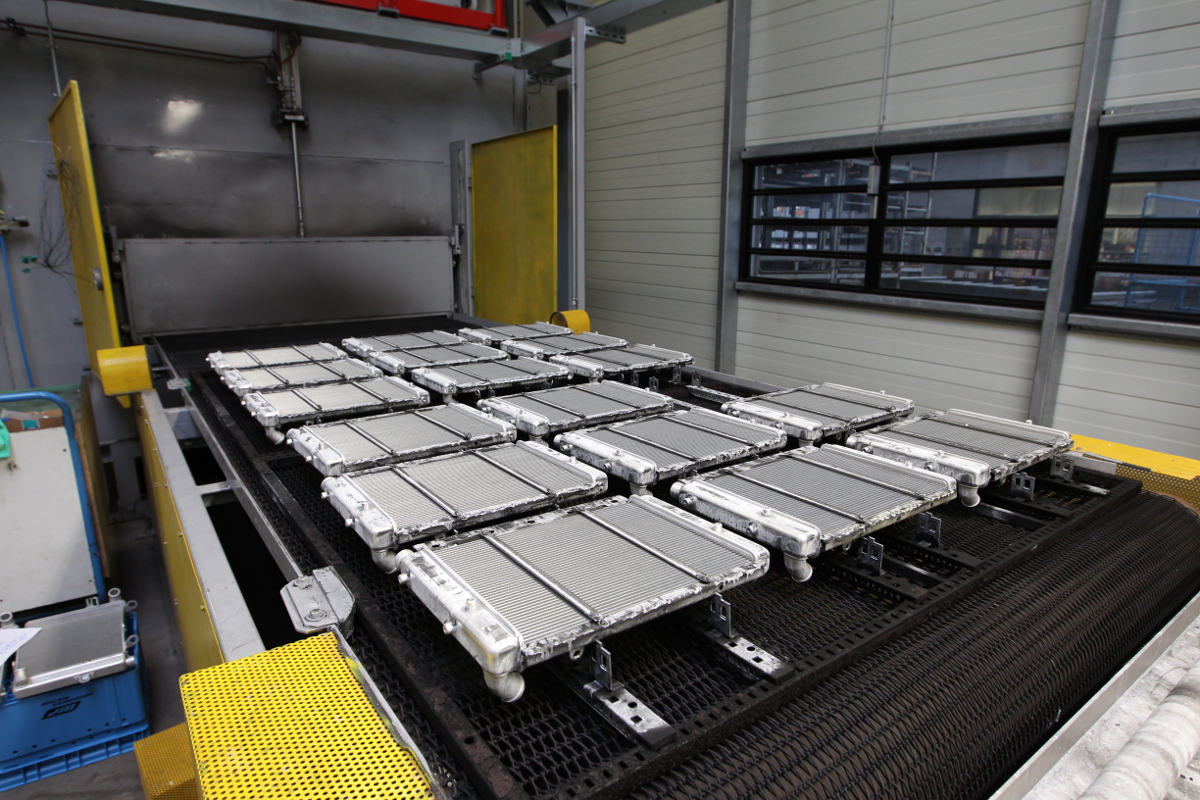 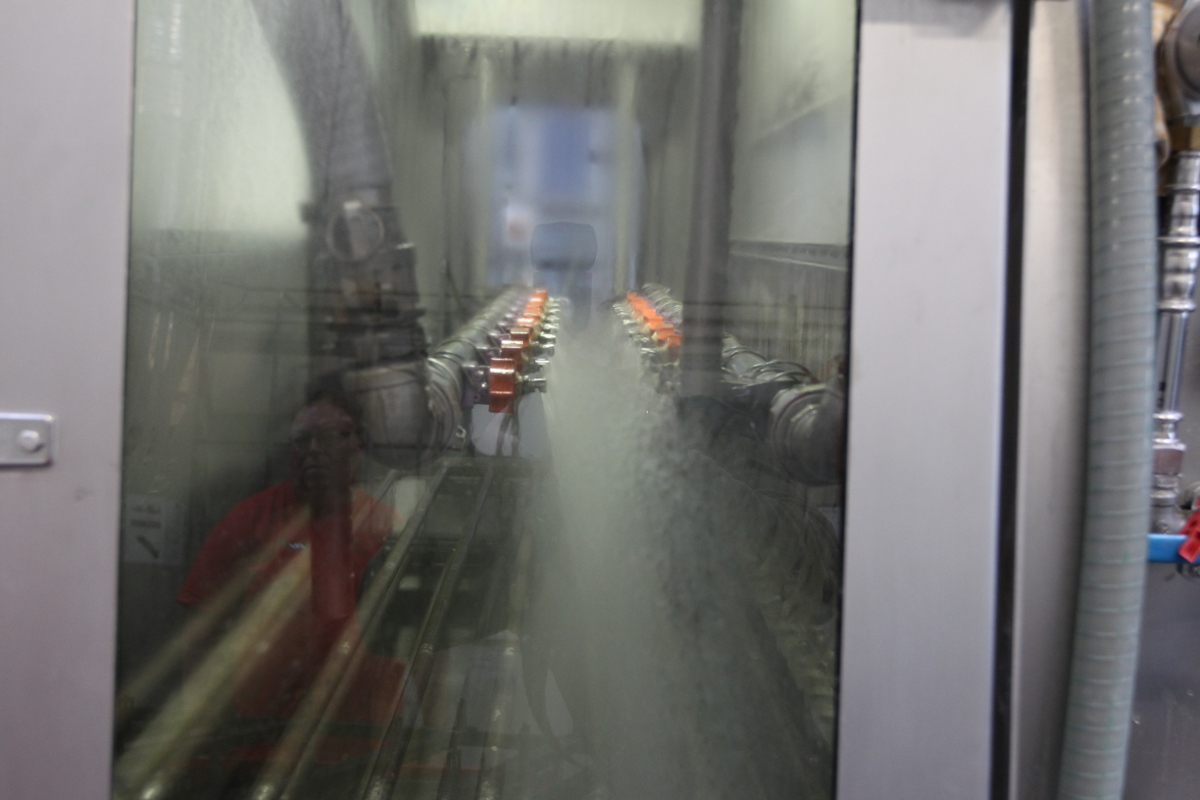 Aluminum has a melting point of 660 degrees, the WP furnace works at approximately 600 degree. Nitrogen is added during the soldering process (similar to the protective gas welding), the material between the parts that should be connected becomes liquid and every radiator becomes a sturdy unit after cooling down. 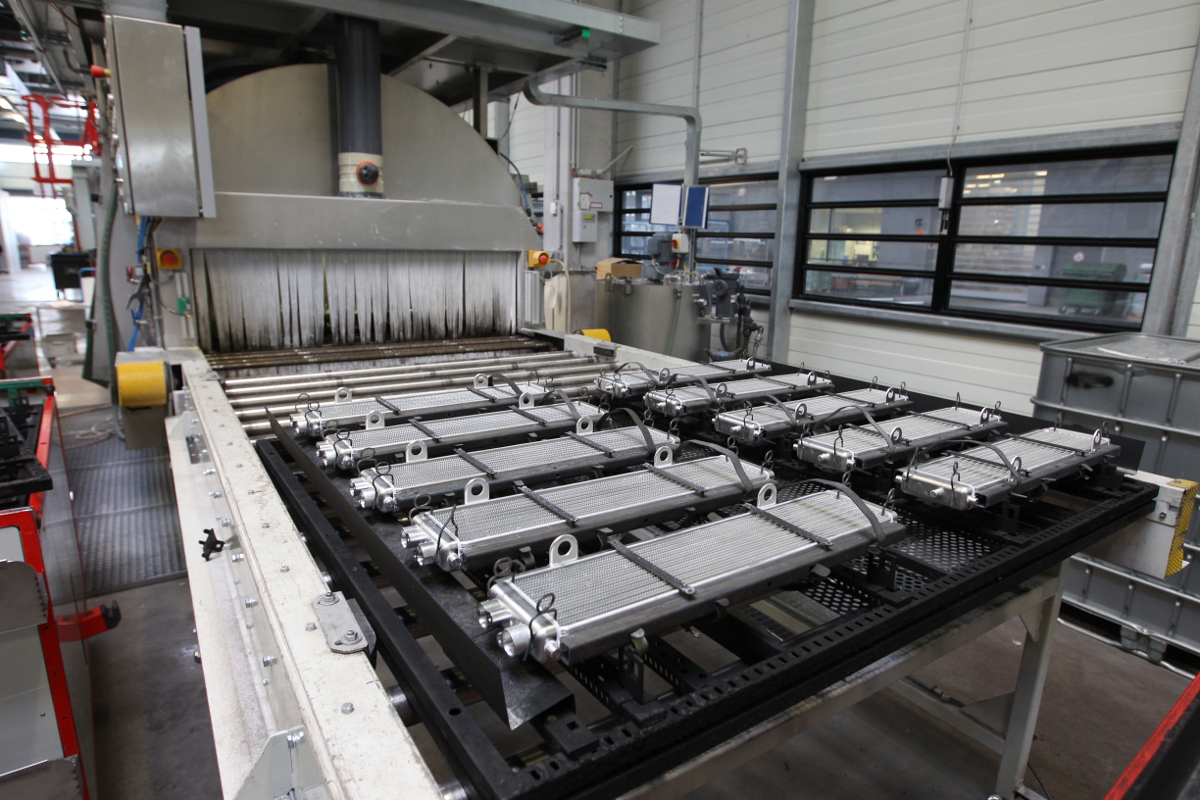 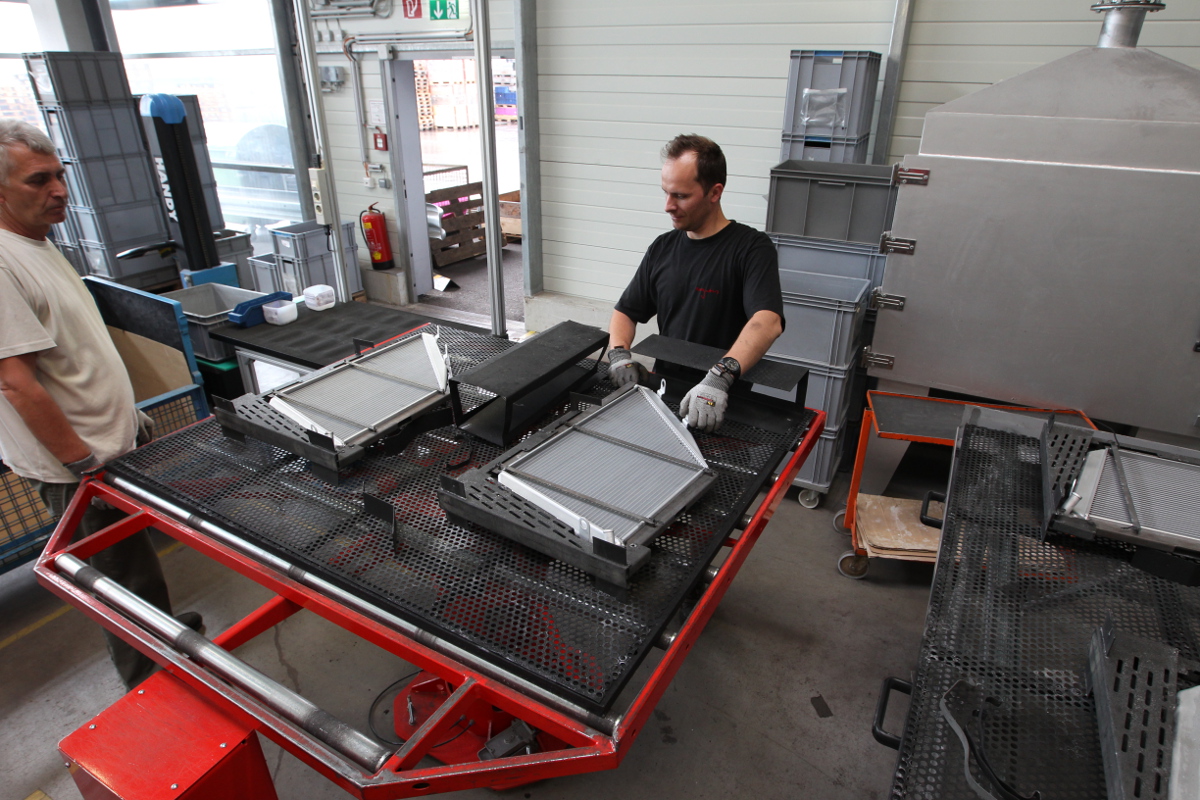 At the next station every assembled part is reviewed in every detail. There is a certain control gauge for every radiator type which reviews all important dimensions, holding points and connection brackets. If necessary the parts are readjusted before undertaken a leak test. Under water every single radiator is tested under pressure. Water coolers at 2 up to 2.5 bar, intercoolers at approximately 10 bar and oil coolers at up to 16 bar. The rule of thumb is that the test pressure is as twice as high as the final maximum operating pressure. 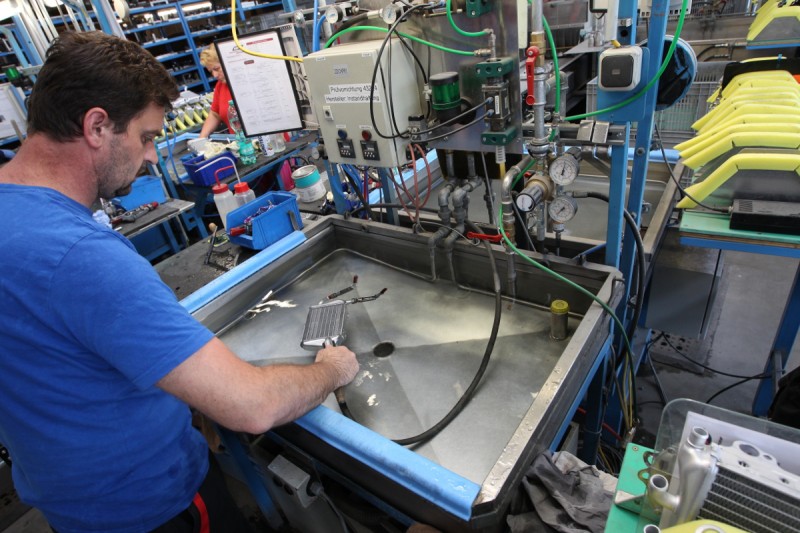 Every inspector has its own stamp to mark the patterns already reviewed. This step is also necessary in terms of traceability that is required in the car industry. In addition, the in-house quality check continuously samples the assembled radiators. 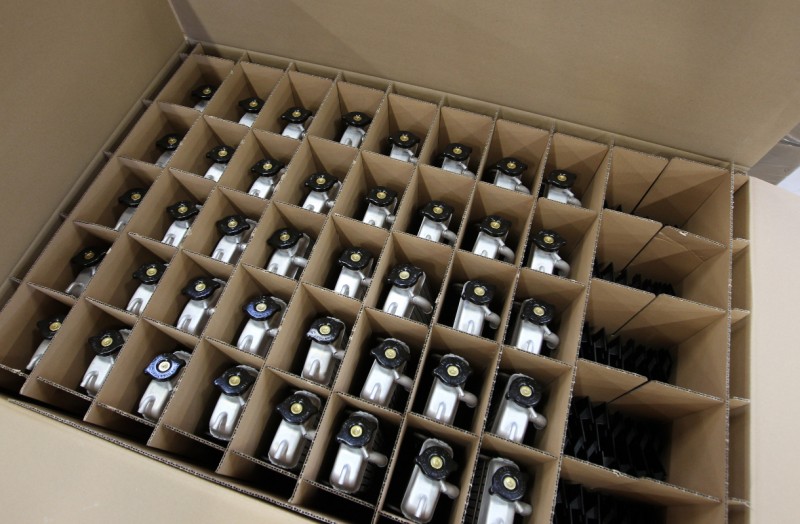 Already in 1985/1986, KTM founder Hans Trunkenpolz started the production of radiators in Mattighofen. Following the bankruptcy in 1992, this independent line of business was sold to holding company in Turin. In 2005, the production was taken over by the new owner Mr. Anlinger from Linz. Finally, in 2010, KTM CEO Stefan Pierer took over the radiator production that consists of a motorcycle and automobile line. The automobile business produced significant quantities but was sold to the German company Mahle, that still has its facility next to today´s KTM spare parts center. In the end, Stefan Pierer integrated the production of motorcycle radiators into the WP group.

Since 2012, the WP radiator production is located in the new facility in Munderfing, but the production numbers date back to ancient KTM times. Every radiator is consecutively numbered. The number of assembled water coolers is between 650 up to 700, the one of oil coolers between 300 and 400. A little bit of KTM history can thus still be found in every single WP radiator.