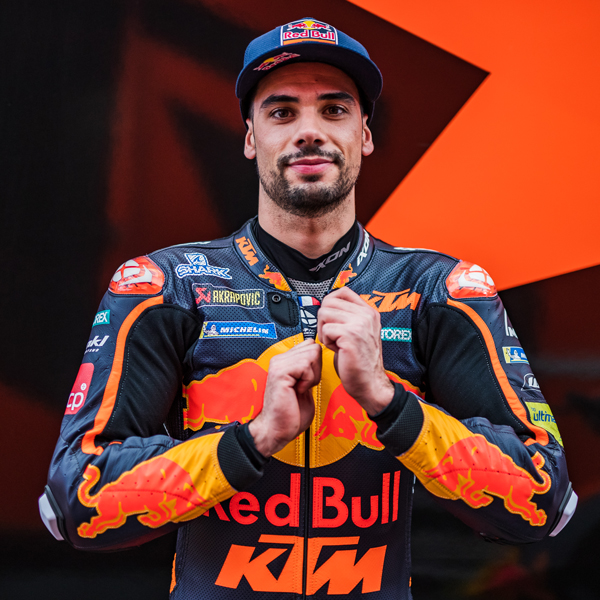 2021 is Miguel Oliveira’s third season in MotoGP; all with the RC16. He now has four trophies in the premier class after backing up a maiden podium of the 2021 season in Mugello, Italy with a brilliant victory in Barcelona, Spain the following weekend. The Red Bull KTM Factory Racing rider is the most experienced KTM athlete in the class and has tasted the soaring highs and the painful lows in just a few short seasons. What gear has the Portuguese counted on in that time? Using a moment in between practice sessions we decided to ask…

In 2019 Miguel Oliveira was forced to miss the final three rounds of the championship due to a shoulder injury. It was a problem from a blameless crash in Silverstone. Twelve months later and the KTM man was making history as the first Portuguese winner in MotoGP and providing the Tech3 KTM Factory Racing crew with their maiden victory in the division. Catalunya 2021, and #88’s first victory with the Red Bull KTM Factory Racing squad is still very much fresh in the memory.

Oliveira has counted on the same gear partners and preferences for his short blast of education and success to-date. In an effort to get ‘under a layer’ with the star we sneaked a camera into his changing room inside the KTM truck and also sought out more details.

“I’ve been with the same brand for gloves and leathers since 2018 but I use Alpinestars for boots and the back protector.”

“I’ve depended on Alpinestars for quite a few years now and the reason I keep with the product is the feeling of protection. The boot is well constructed. You get an idea of the quality and the design. They are also comfortable! It was convenient that I could keep with a brand I know. In 2020 I used four pairs of boots in total but, in general, it depends how much you crash and wear-out the kit.”

“Under the leathers I’ll use a short sleeve undersuit. Everything is custom-made. Even some of the protection and inner stitching is done to fit me and my preferences. I like to feel the leathers quite tight around me. I like to feel aerodynamic. The material is kangaroo, so it’s light and strong. Normally I’ll replace the knee sliders after two practice sessions and elbow sliders are similar. It depends on the track but generally they will last a day.”

“The chest protector is mandatory and the back protector slides in also for those leathers that don’t have one built-in to the airbag. I’ve been a fan of the airbag since the beginning and from my first year in Moto2 in 2016 where I was wearing Alpinestars and their TechAir system. It always worked well and I’m glad we have it.”

“It does seem that we are carrying a lot and for hot races it’s not easy. Once the temperature goes up and up then it’s hard to make conditions cooler! All you can do it make sure you are prepared physically and hydrated well. The suit can be ventilated but there is not much fresh air coming in!”

“I’m not too fussy with gloves but one thing I don’t like is too much material or bulk around the bottom of the palm because it interferes with my feeling on the bars. I will say that the gloves are perhaps one of the most important pieces of kit simply because of the amount of activity you are doing on the bike – your feet are busy as well of course – and the contact you have. When you crash then you really want to protect your fingers and hands as much as possible.”

“I’ve been with Shark since 2012. It has been a fantastic relationship because the helmet is so effective. The things that stand out for me is the ventilation and the field of vision. Like all of my partners they also offer a great service facility at the tracks as well, so if I have any issues after a crash then it’s fixed right away.”