The KTM Blog was able to find some time in the super-busy schedule of CEO Stefan Pierer for an exclusive interview that we are bringing to you in three parts. In this first instalment Mr P talks about his first years at KTM and the quest to turn the company around to become the number one bike manufacturer in Europe. 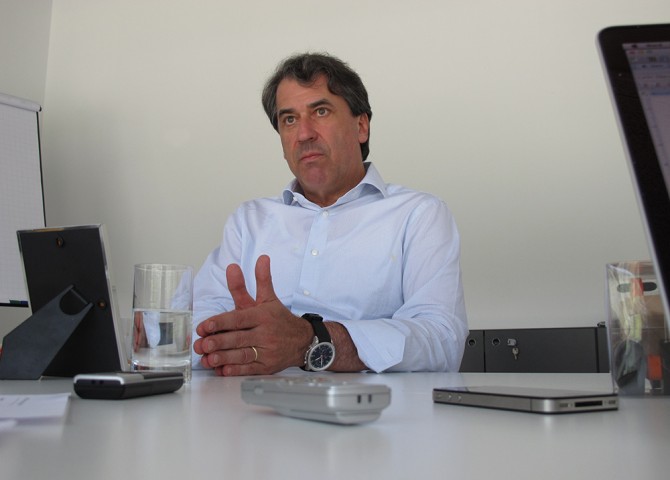 The journey for you began over twenty years ago with KTM. What is your feeling about this period now…?

After 21 years you have a lot of experience based on good decisions and bad. You get cleverer when you make a mistake! When I decided to step-in with a group of KTM importers to take the company out of bankruptcy in 1991 I didn’t expect what would happen. I was convinced that the brand was strong and we had a good distribution network based on importers.

We had just one subsidiary in the States but there were some bad things; bad quality and that English saying for KTM ‘Kick Ten Minutes’…they were some of the first comments I had after taking over. Quality was missing and design was not there, so that was the starting point but there was a strong community where KTM was recognised as a very fast bike that was not reliable. You could win if the engine didn’t fail. Based on those weaknesses we sorted it out and I think you can see that every year has been another step.

We started with 6000 units sold in the first year and made a small profit and now this year – with the Bajaj Indian-built units – we could reach 120,000, so there is a clear distance and to be being the best sellers in Europe. Last year we were in a photo-finish for that distinction but adding on Husqvarna it is now clear…The vision for the first twenty years was to become the number one in Europe. 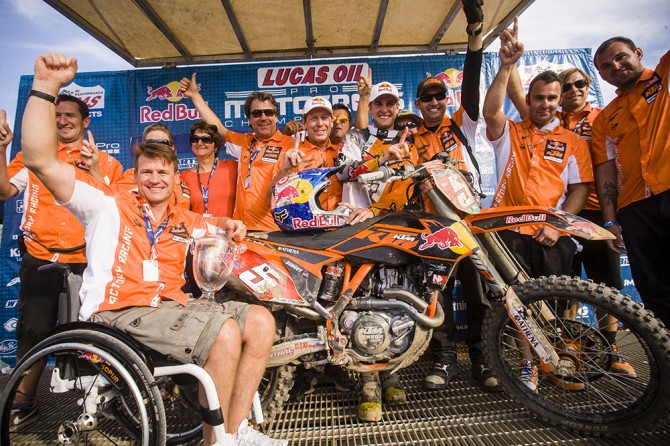 Do you expect this in the time frame?

Ten years ago, I think it was the Munich motorcycle exhibition in 2002 where I was on the podium making a press conference and some statements, and at that time we presented the naked bike – the Super Duke – for the first time. I made a clear message to my ‘colleague’ in the other hall, BMW, that I wanted to become the number one in Europe. It took ten years but finally we did it.

How do you feel being in the motorcycle business? How does it compare to other industries?

I would say 60% of it is emotion and 40% is to do very precise and professional work, especially with R&D, innovation and product development. The emotion is about creation, that family feeling, something that stays with you all your life. The earlier you can reach a potential customer then the better because they will carry the brand in the end. That is one of the key success factors in KTM. We live the brand and it is not just one person but a group that is very motivated. We also go racing because that is part of the philosophy of our brand and it mirrors life; sometimes you win and sometimes you lose. You must believe in your product or you will not be ready to deliver outstanding results. Money is one thing you need to make development and to keep growing as a company but in the end you don’t need it because it is the memory and the experience that you have with others in the same segment that can make the difference. This is what makes it so nice. 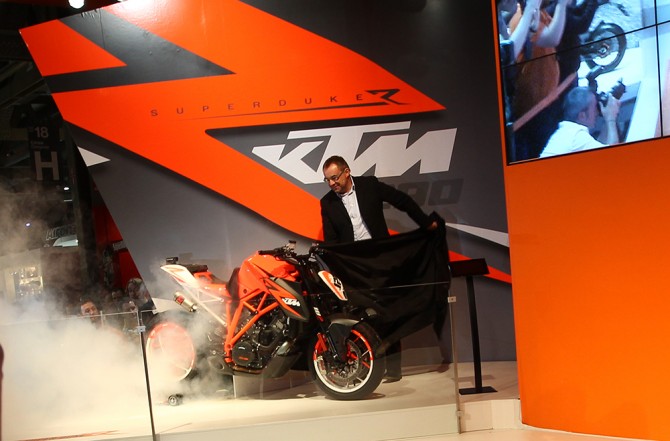 It is hard to imagine anybody inside KTM not caring about the brand. Could that also be part of the success story?

Since the beginning there has been a KTM core group. Heinz Kinigadner was one of the main guys who influenced me twenty years ago or Toni Stöcklmeier, the German importer. There are a lot of long-standing KTM guys that helped me a lot. It took a couple of years to understand everything. What we are doing is ‘ready to race’. Some people from the outside might think ‘what are they doing? They are over the edge’ but it creates that specific atmosphere and through joining such a club, you stay in the club.

Did you ride motorcycles before stepping into KTM?
I came into it from the merger-acquisition side. I was taking over companies in need of restructuring or had gone bankrupt to turn them around. That was my original profession and with KTM, in the beginning, I thought I would do it and then hand it over to a better man but I was convinced to do it and stay in the business as an entrepreneur. I got much better and it has taken two decades of my life. I’m a motorcycle rider. Basically there was a very serious strategy behind it. As an entrepreneur a lot of decision-making is made on a spontaneous basis. You have all the information you can get and you gauge the feeling you have at the time and decide whether to go for it or not. It can be very reactive but we had a clear plan for KTM.

The first step was to become a quality product in the Enduro niche where we were selling well in the early ‘90s. We needed to bring in good design concepts and Gerald [Kiska, designer] was one of the key guys from the beginning because he is fantastic and an emotional motorcycle rider and understands the product, and that is important from the design side – it is not just about making a good looking bike, it must work. The direction became popular and meant we came back on track in Enduro and then started to look at motocross.

At the time it was two-stroke and heavily dominated by the Japanese and sometimes Husqvarna. We went for a big displacement and invented the 380 because the 500 was already too strong and in ’96 we got the first championship in the big class with Shayne King. That was the first time the door opened to attack motocross. We did it step by step and at the turn of the millennium Honda was pushing very hard with the four-stroke regulation and we had to do a lot of homework to produce a competitive engine concept but finally we have overtaken all the Japanese with that and we are the number one in motocross.

Throughout the ‘90s we were thinking ‘what else can we do?’ and we embraced the Supermoto trend from France and it was easy. You keep the same machine but put in road tyres and nice brakes and more adjustments to go racing and that was our first approach for on-road or road bikes. It was very successful and in the late ‘90s we reached a point where we could go to the stock exchange and raise money for further growth and that led to the two cylinder four-stroke project that became the 990 concept.

As KTM – an off-road racing firm, Paris-Dakar and so on – it meant an Adventure-type of Enduro. We did it with Fabrizio Meoni and won the Dakar for the first time in ’02. Overall we did every segment step-by-step and we had failures. The first Adventure was a combined development programme but finally we did it and meanwhile we had a whole programme for sport motorcycles. We cover from 125 up to 1300.

The best strategic move we made was to go for a partner in a so-called low-cost country, which is India, and the union with Bajaj in ‘06-’07 and it is working very well for the European and American markets because the crisis has pushed down the middle class, and displacement for motorcycles is going down as well. Smaller displacement and affordable motorcycles are the trend. Shorter commuters and urban mobility have become more important. In the long-term I expect motorcycles to come back…although young customers are drying out.

It is the demographic pyramid and there are barriers to ‘get in’ to riding such as costly licences for youngsters. The current generation of parents are scared about everything. They want to keep their kids in a safe environment. When we grew up you were participating and part of the community or you were not. If you grew up in the countryside then you either had a moped or motorcycle and therefore mobility or you didn’t. It is as simple as that.

So over twenty years there has been a clear strategy behind it. We tried some things on the outside where we gained experience, such as the ATV with the Polaris. We figured out that we could produce the best-performing ATV but the segment is totally different. A different dealer network, different mentality. It is not our core motorcycle business so we came away from it. We did a sportscar – very successful – but the crisis worked against it and we had to write it off. All the investment is still alive and is working but it is not the core content and now we want to become the world’s biggest sport motorcycle manufacturer; that is the vision for the next ten years.

It is interesting that this title is not held by Honda…it is Harley Davidson! It is a special kind of two-wheel motorcycle riding. These guys are selling 210,000 units. Although Honda is the mighty power around the world – this is clear – in the sport motorcycle segment of 125 or bigger Harley is the leading brand. 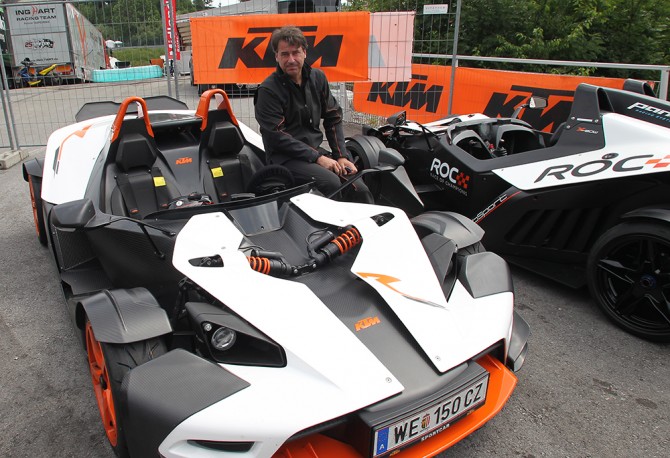