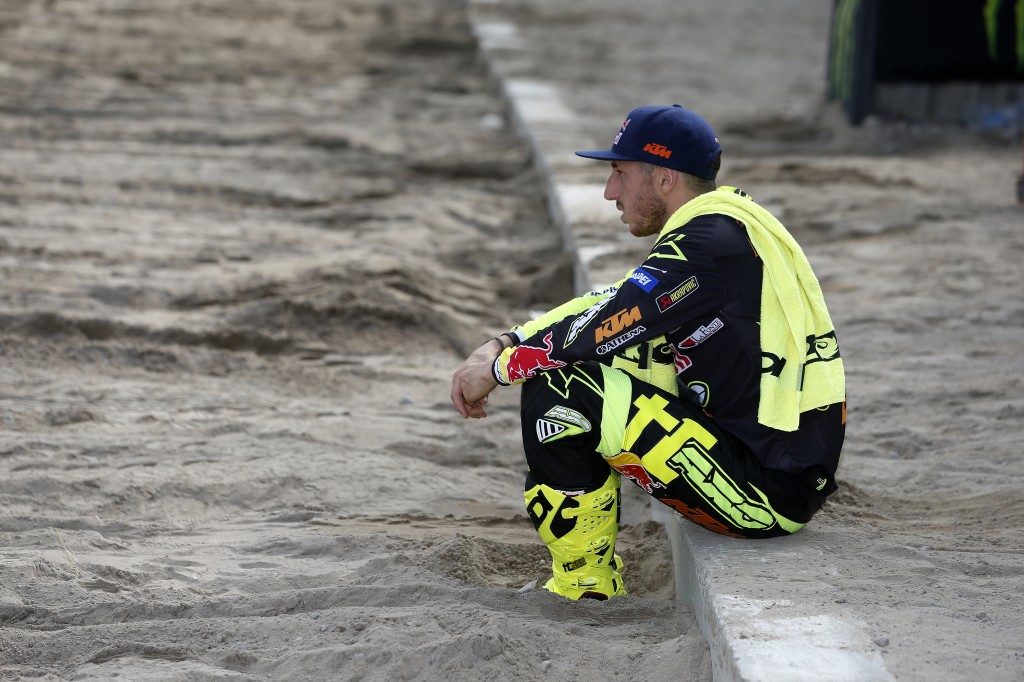 Interview of the Month, part 1: Tony Cairoli & why he rides motocross

On the verge of an eighth world title and sixth in a row in MXGP the absolute master of motocross racing, Tony Cairoli, reveals his roots and passion for the sport.

Almost 29 years old (next month) Tony Cairoli has a zest for Grand Prix and motocross racing that would shame any teenage wannabe. The Sicilian could stand at the peak of the FIM Motocross World Championship once more in a matter of days at the Grand Prix of the State of Goias (Brazil) and isn’t going anywhere from his Red Bull KTM saddle for the next two seasons. There are parallels to another notable Italian in MotoGP in terms of the joy, fun and skill for racing but the simple matter is that no pretender or rival can get close to 222’s consistency, speed and excellence in virtually any condition or circuit.

Tony has been around the GPs since 2003: a long time. He has been the subject of numerous Red Bull promotions, countless press and will even have his own movie with a theatrical release this autumn. We wanted to find out from where and how the passion still burns so brightly for what is an intense, lonely, demanding and dangerous sport and profession. 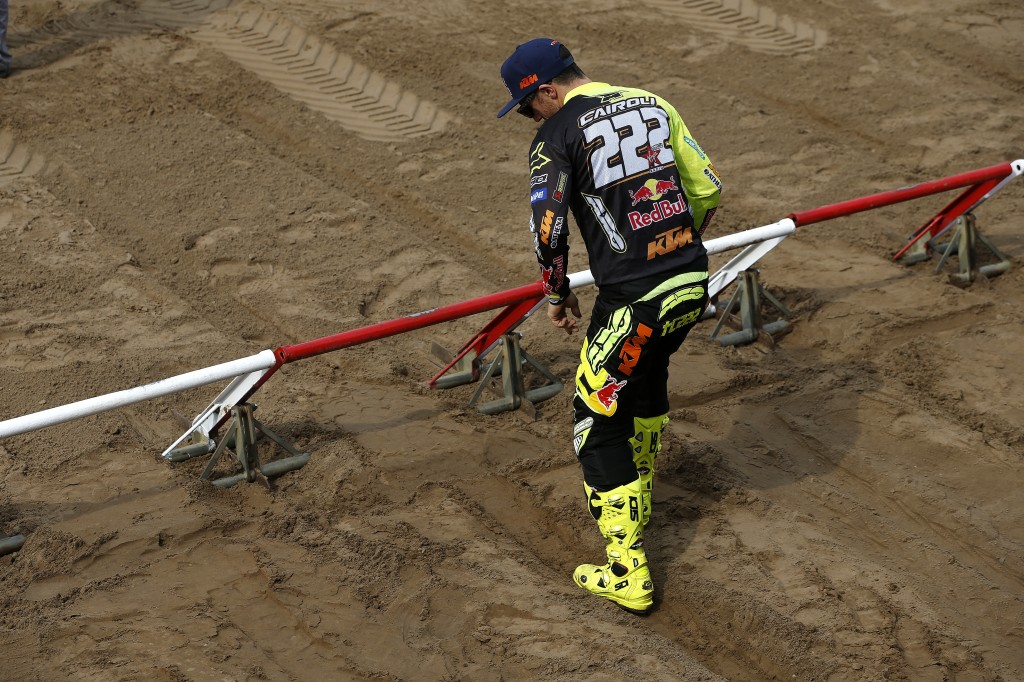 “I ride motocross basically because my father had a lot of passion for motorsports in general and my cousin was riding in the local town with friends,” the Rome resident reveals. “I only saw motocross from the beginning [of my life]. It was something I had around me as a boy and I wanted to do it. I had a bike and then I wanted to be on it all the time.”

What was it that thrilled you about motorcycles and motocross?
“The thing that excited me the most was the noise. Every time I heard a bike I was alert. It was impossible to do any homework or be sat inside the house. I always like to ride a lot when it was raining. I don’t know why. Maybe because it was something new or something that didn’t happen often in Sicily! It was special and more difficult. Normally I was riding in dust.”

“The thing that excited me the most was the noise.”

When you were riding and racing more regularly did you ever have that conversation with your parents about the dangers of it?
“No. When I was a kid I didn’t get any injuries and that continued more or less up until I started Grand Prix racing. I was riding pretty safe all the time and not doing crazy things…which made my family happy! They never had to say to me ‘calm down’.”

That seems almost hard to believe because when you came to Grand Prix you used to throw that 250 around like it was a toy. It was great to watch …
“I never rode BMX nor did I ride supercross in Sicily. I think it was just the feeling I had on the bike immediately. I always try to find the fun in all the different conditions and tracks. Not just on the bike but also messing around with my friends. I think I had this feeling to enjoy everything as much as I could from when I was a kid.” 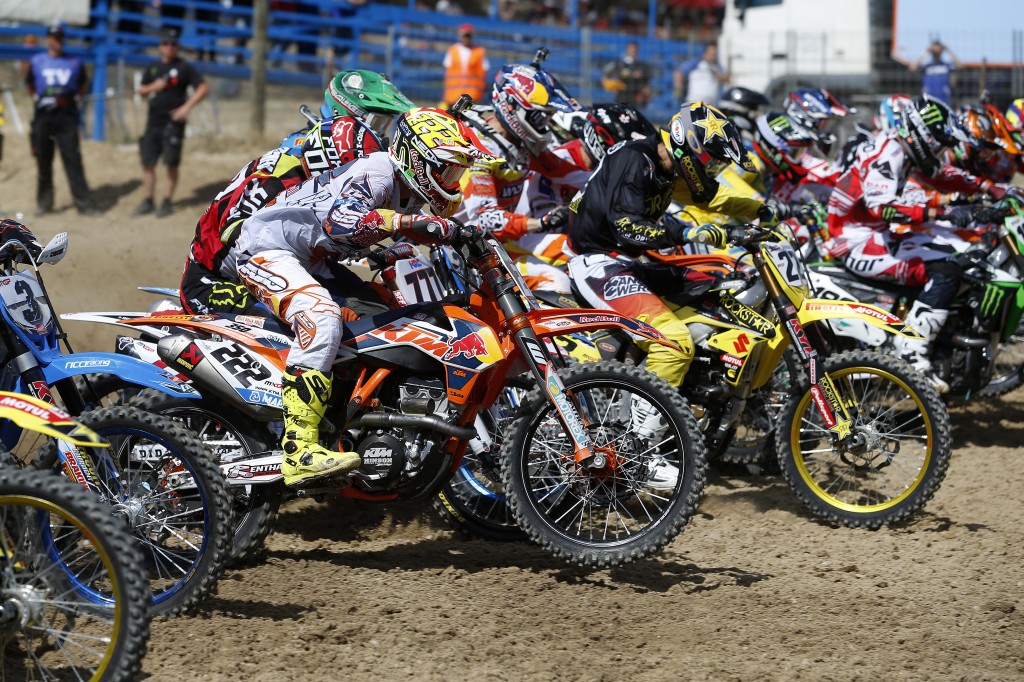 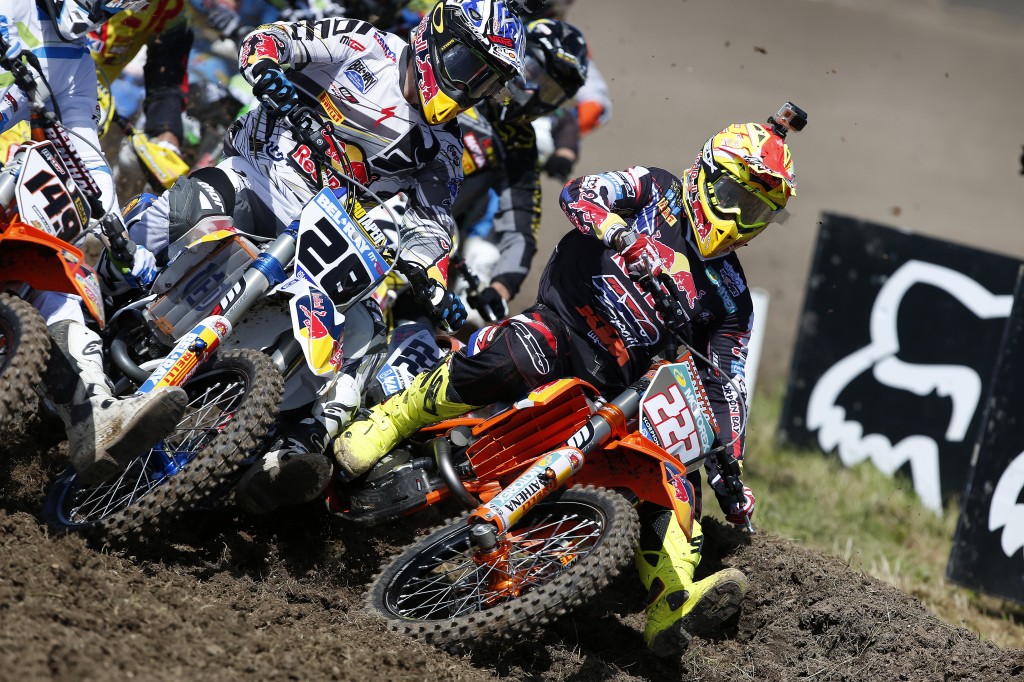 If the buzz of motocross is not about jumps and corners or maybe even victories any more – as you have 72 – what gets your adrenaline flowing?
“What puts a smile on my face now is getting near to being perfect. It is almost impossible to do it in one lap. You are thinking about one corner or one bump or another section of a line. It is difficult and I always want that perfection when I am riding. Sometimes when I do a piece of track I like I think: ‘OK, that’s good, lets go to the next one.’ It is so tough to get them all.”

“What puts a smile on my face now is getting near to being perfect.”

What about winning and the feeling of it?
“When you win for the first time, or the first few, then it is always special. When you win a lot it becomes normal. Namur, my first, does not feel so long ago. If you win then it comes because you have worked hard for it … sometimes if you don’t win then it is because someone else is simply faster. Some wins are a total surprise.” 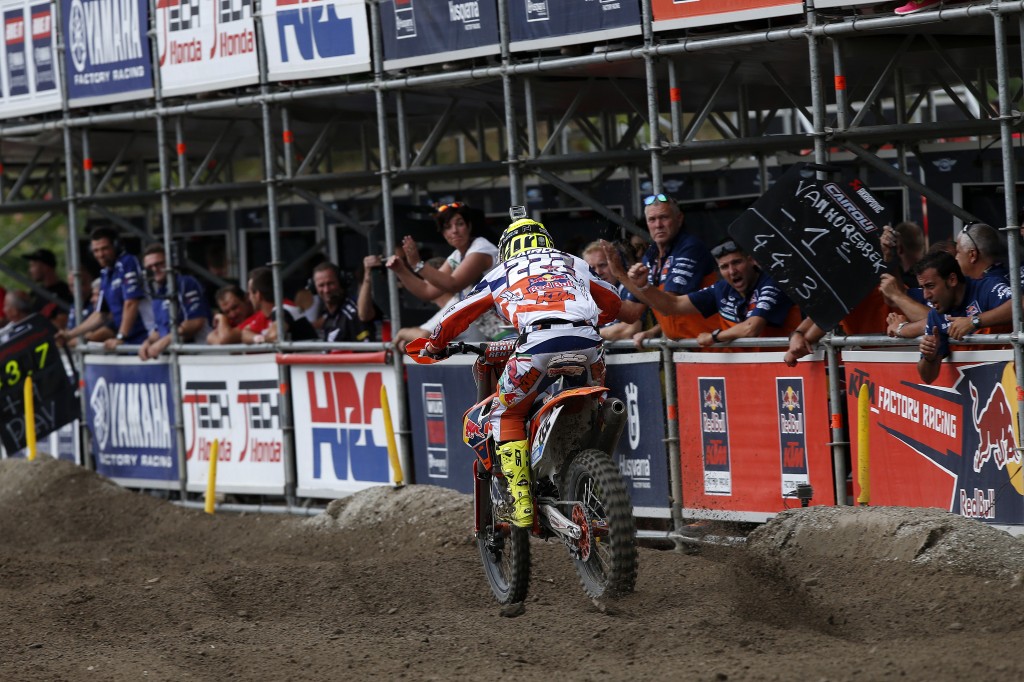 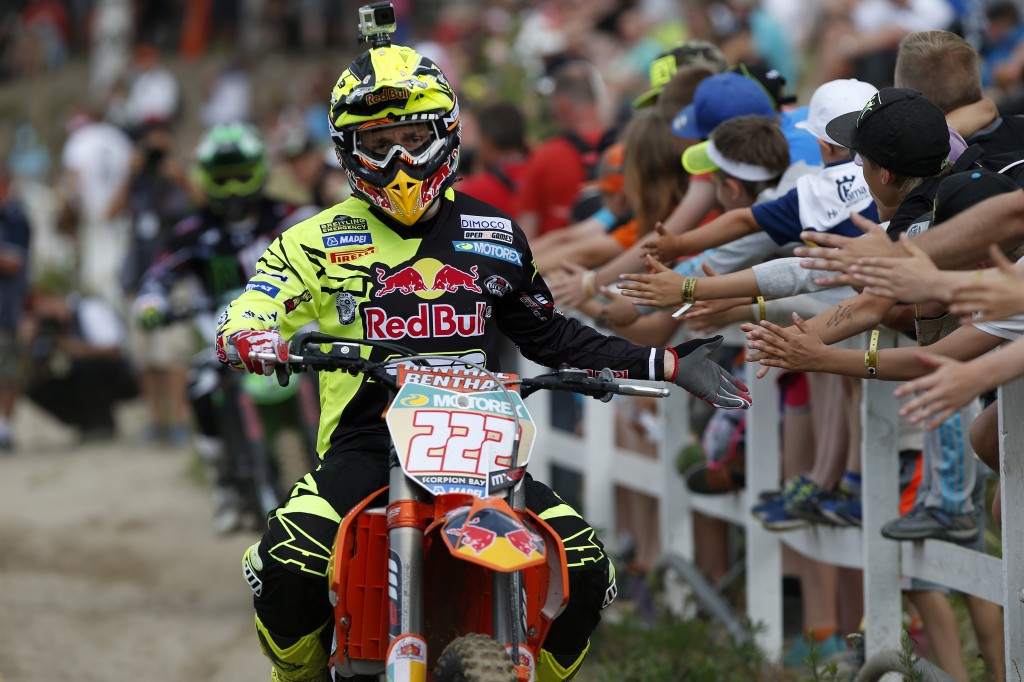 2014 has not been an easy season with some personal bad news to deal with [Tony suddenly lost his father at the beginning of the summer] and there have also been some mistakes where you have conceded Grand Prix victories very late in the second motos. How long do those errors live with you?
“When I make a mistake it can stay with me for twelve hours … a long time! In the Czech Republic I knew that if I carried on the same lines I had the whole race then the GP would have been mine but I always want to try and do something different. On tracks like that then you cannot vary much and this is not really my style. I don’t like to do forty minutes like a robot and always hit the same millimetres of the track every lap. It gets boring and a few times I lost focus.”

“When I make a mistake it can stay with me for twelve hours … a long time! ”

What satisfaction do you get from the races themselves?
“In the last two years the tracks have not become easy for passing. Before I can remember taking bad starts and having some good races coming through the pack. I like those kinds of motos; where you can invent new ways to corner and pass. It is nice and more exciting. More so than taking a top three start because normally the first three are always going at the same speed.” 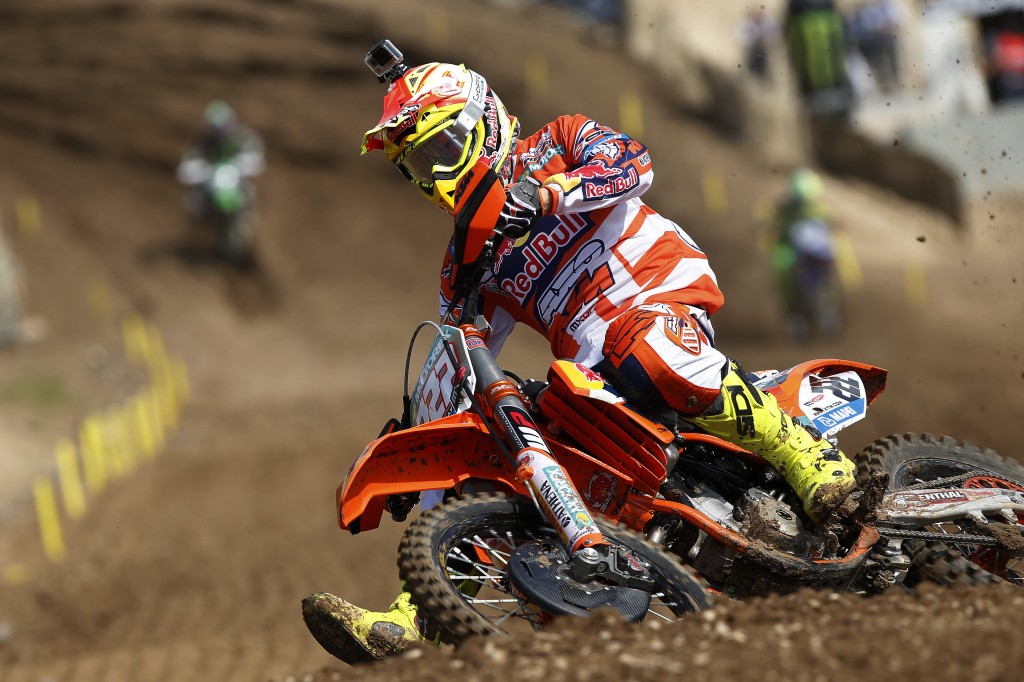 Contracted until 2016 you will be almost like a ‘grandfather’ in this sport by then. Can you still stay at the same level against the younger, hungry guys?
“I’m lucky that I have not had many injuries in my life and you can continue longer thanks to this. For sure the younger riders are really motivated to win races but the championship is a different thing and I am already looking forward to the next challenge. I can see already a few places to improve for 2015.”

110 Responses to Interview of the Month, part 1: Tony Cairoli & why he rides motocross