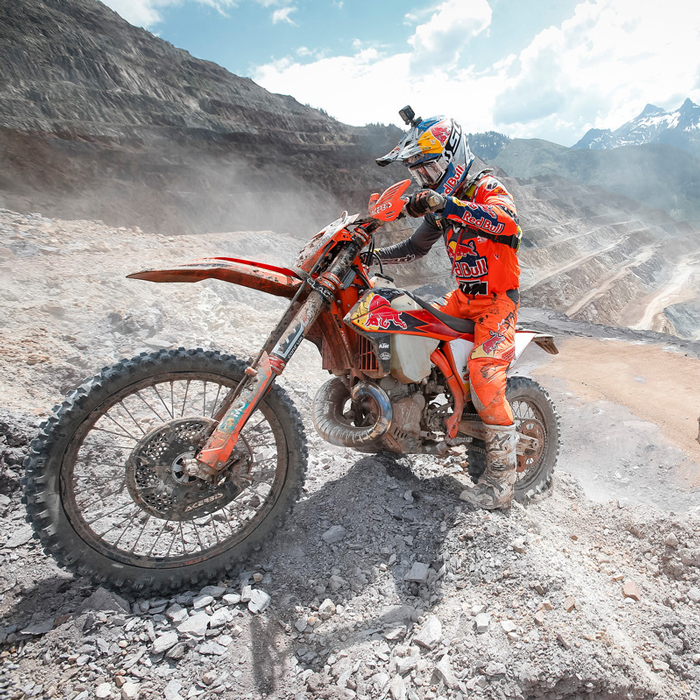 JOSEP GARCIA – UP FOR A CHALLENGE

Red Bull KTM Factory Racing’s Josep Garcia is not one to shy away from a challenge. With wide-ranging childhood dreams, he’s grown from mini-moto racer and Red Bull Rookie rider to an Enduro World Champion and two-time Red Bull Erzbergrodeo finisher. 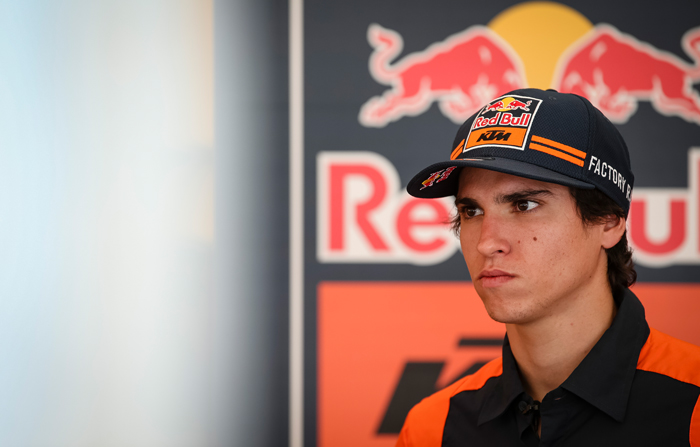 Along the way he’s also claimed three victories in the WESS Enduro World Championship, while becoming the first rider in 33 years to beat the French on their home soil to win the Trefle Lozerien classic enduro.

With aspirations of leading Spain to ISDE victory, as well as extreme enduro goals still to be achieved, Garcia isn’t done yet with adding to his list of achievements… 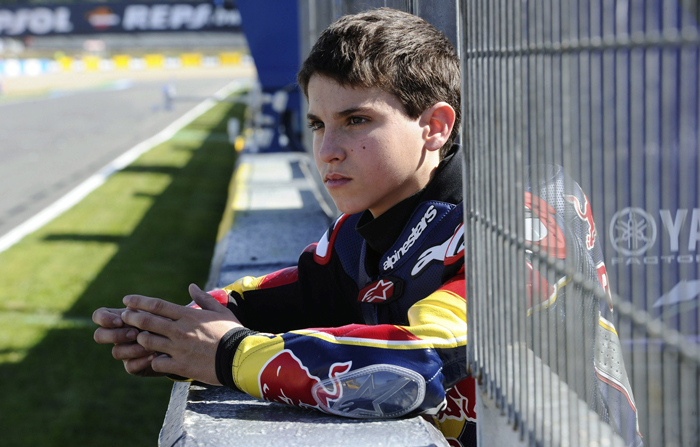 Josep, from Red Bull Rookies to an Enduro World Champion and two-time Erzbergrodeo finisher, are you surprised by the things you’ve accomplished on two wheels?
Josep Garcia: “As a child I was quite broad in my dreams. I always wanted to be a world champion, but wanted to finish something crazy like Erzbergrodeo, too. The Red Bull Rookies was an opportunity too good to refuse. I have a lot of good memories from that 2011 season. On paper it’s a strange path, probably unique, but all of it has helped shape me into the rider I’ve become.”

How did Red Bull Rookies happen for you and why did you decide to move to enduro?
“Going from road back to off-road is a strange journey, but it’s just the way things worked out. I was about 14 years old when I got the chance to go road racing, so I took it. I had tried mini-moto racing as a child and wanted a change from motocross, so followed that path. I had some good results but looking back now it mostly taught me about being a professional athlete. At the end of 2011 there was an opportunity to move to enduro and I took it. It was a natural fit and so far it’s worked out pretty good!” 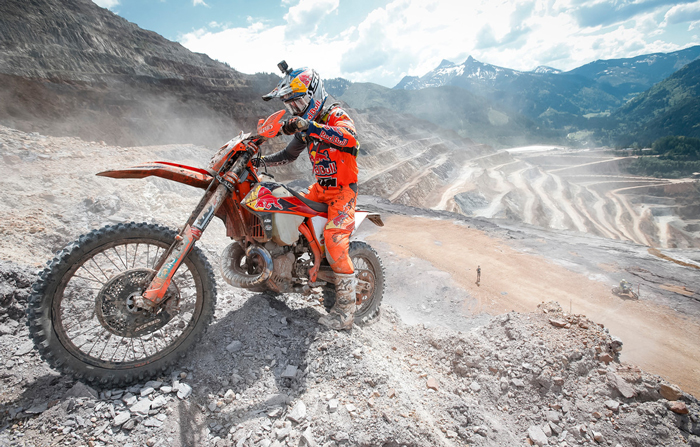 Garcia has tackled some of the most challenging hard enduro events. Here he’s riding the KTM 300 EXC TPI at the Red Bull Erzbergrodeo. PC @Future7Media

You began enduro on a 125cc 2-stroke. How important is a smaller capacity 2-stroke to develop a rider’s skill set?
“For me a 125 or 150 2-stroke is the foundation for everything else in enduro. It’s the best bike to learn on and a bike everyone should spend at least one-year riding. It teaches you so much because it is the most difficult bike to get right. You have to learn how to make it work in all conditions. Now I see lots of riders jump to the bigger bikes too soon, but I think that’s a mistake. What you learn riding a the smaller 2-stroke stays with you for life.”

What’s been the hardest thing for you to learn in extreme enduro? Has your physical size and height been an issue?
“For sure the hardest thing I’ve had to learn was the technical riding. Almost all of the top extreme enduro guys have a world-class background in the sport or have ridden trials all their life. I didn’t. And I’m also short, too, so that hasn’t helped! But I’m getting better and better each year. Bike set-up has been important and I have to thank guys like Alfredo Gomez for helping me with that – it means a lot.” 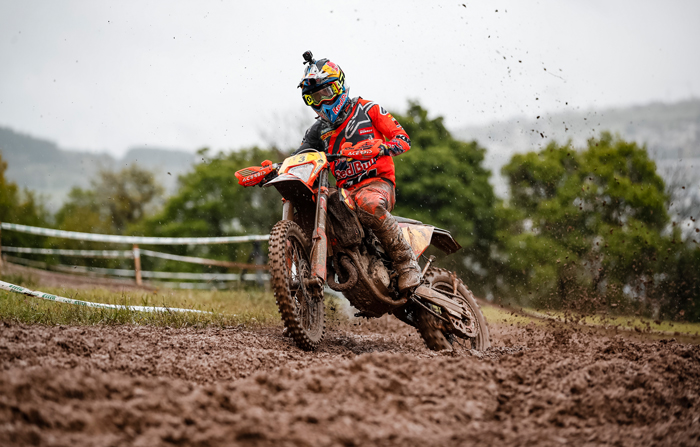 Garcia tackles the Le Trefle Lozerien mud on his way to becoming the first non-French racer to win the event. PC @Future7Media

As the first non-French rider to win Trefle Lozerien, how special was that victory in 2019?
“Winning Trefle Lozerien was one of my most favorite moments of my career. It took two years to achieve that. I learned a lot in 2018 and used that to fight for victory in 2019. It’s such a specialist race, you wouldn’t believe. There’s a lot to get right. The tests are very unique to France with lots of grass. You only ride each test once too, so there’s lots to remember and because you never quite know where you are going, you ride by feel. Last year was made difficult by the mud, so to prove myself in those conditions and become the first non-French winner was magical.” How has learning the technical side of extreme enduro helped you improve your riding and speed for classic enduro and special tests?
“When I see extreme tests now they look easy. In the past I was always nervous about them, but from racing extreme enduro I’ve done stuff I never imagined I could. I’m more confident in the technical sections as a result. But one thing I’ve learned with extreme riding is traction. You are constantly fighting for it on climbs and rock gardens. I’ve got a better feel for that and push the limits more.” 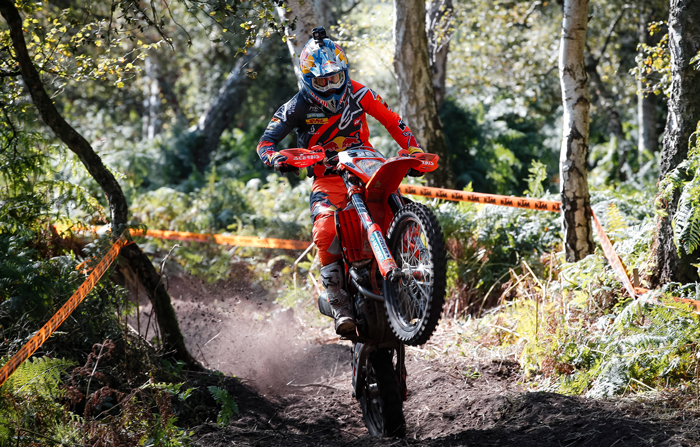 Is a willingness to adapt to the challenges you face a reason for your success?
“You’ve got to embrace challenges in enduro. It’s something I’ve always believed in. Enduro is not just one thing, it’s everything. To be a true enduro rider you’ve got to do it all. Riding different disciplines helps you grow as a rider. I used to train mostly motocross but now my training is broader. I spend 50% of my time doing motocross and special tests and then the other 50% riding extreme stuff and trials.” 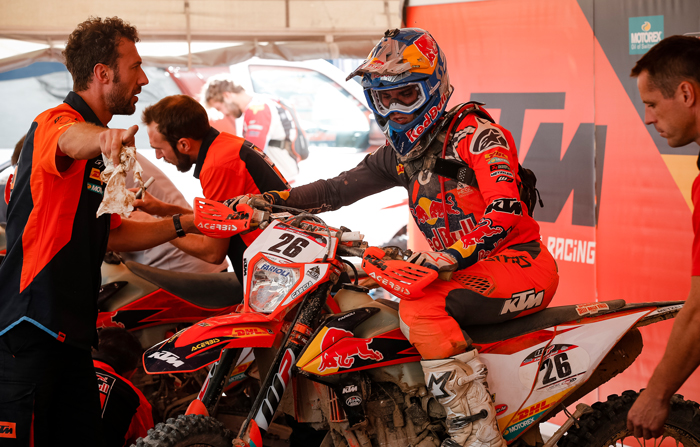 Why have you moved from the KTM 250 EXC-F to the KTM 350 EXC-F for the classic enduro events?
“After four years on the KTM 250 EXC-F I felt this year was the right time to try the KTM 350 EXC-F. I achieved a lot with the 250F, so wanting to prove myself on a bigger bike offered a lot of motivation. Although it is early days, initial testing and the opening round of the Spanish Enduro Championship delivered good results. I feel like I can still be me on the bike, but it’s also pushing me to improve areas of my riding. When the ground is perfect I can be that aggressive rider I love being, but when it’s technical or wet I need to be smoother to ride fast. With more races to come, I’m excited to see where I’ll be at by the end of the year.” 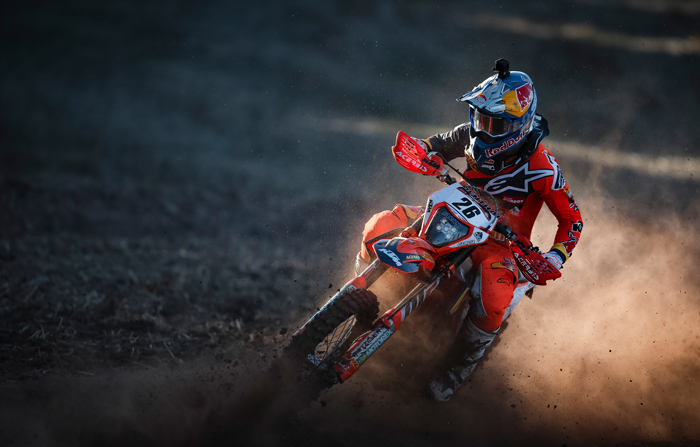 On the gas at the WESS Enduro World Championship event in Solsona, Spain 2019. PC @Future7Media

What more do you want to achieve in enduro and racing?
“Right now, my motivation is to see what I can achieve on the KTM 350 EXC-F and to improve myself on the KTM 300 EXC TPI in extreme enduro. I want to reach the top of the podium again and to win special races like Trefle Lozerien or Hawkstone Park. I also want to win the ISDE outright. I’ve won my category and finished inside the top three overall – most recently Portugal 2019 – but never finished on the top step of the podium. I’d love to do that.” 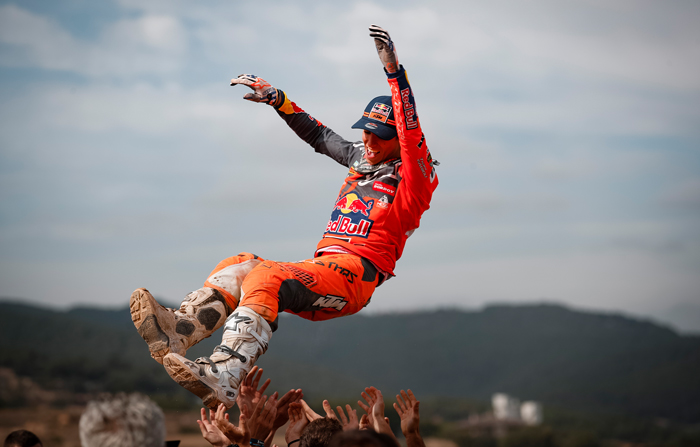 Garcia enjoys the celebrations after winning the BR2 Enduro Solsona in 2019. PC @Future7Media

Finally, does winning the ISDE with Spain top that list, too?
“Yes, definitely and I think we’re coming into a good place to do that. As a nation we’ve got strong riders and the set-up of the Spanish team is ready to rival what Australia or USA have. For me the ISDE is a special race. It is the most important race for classic enduro and it’s the only time of the year when you race the best classic enduro riders in the world at the same time. Incredibly Spain has yet to win it, but I believe more and more we have a good chance to make history soon.”

With Covid-19 putting racing events on hold globally, it’s not yet clear when Garcia will be back in action in the WESS Enduro World Championship or national series. We look forward to seeing him trying to reach his goals over the next few years!

509 Responses to JOSEP GARCIA – UP FOR A CHALLENGE