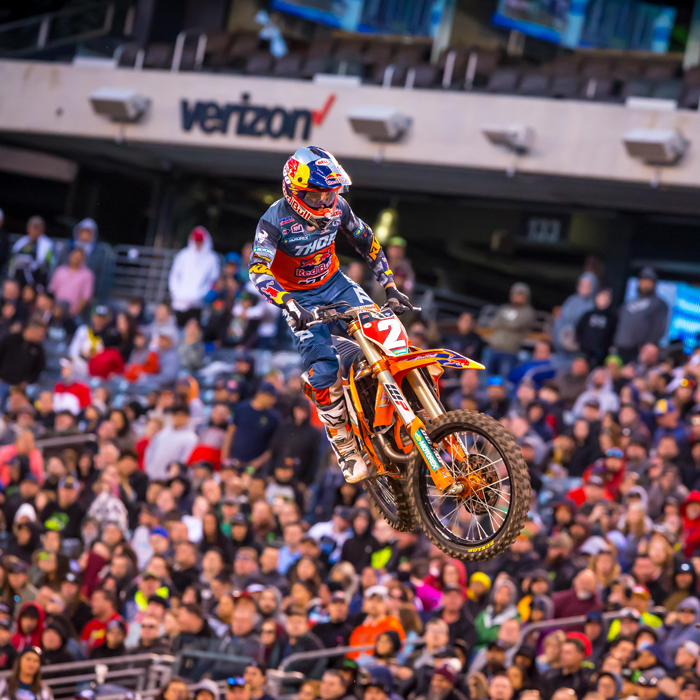 14 THINGS YOU MIGHT NOT HAVE KNOWN ABOUT KTM AND SUPERCROSS

1)  Supercross is an American creation but the first two winners of an AMA-sanctioned ‘Supercross’ event in 1974 were Dutch and Belgian. Pierre Karsmakers and Red Bull KTM Factory Racing’s own Roger De Coster owned the 250 and 500cc Main Events at Daytona in Florida. Karsmakers would prevail across the three rounds of the 250cc series (Daytona and Houston in March and Los Angeles in June) to be the first quarter-litre champion. By 1977 Supercross had grown to 10 rounds and by the mid-1980s it was already touching 16-17 fixtures.

3) KTM’s first ever Supercross win? It came with the KTM 125 SX, 27 years after that Daytona inauguration. On April 21st 2001 South African Grant Langston claimed the 125cc West Coast Main Event in Irving, Texas. By mid-00s KTM were in 125cc title contention with Josh Hansen and Nathan Ramsey winning races in both East and West competition but the first crown did not arrive until Ken Roczen ruled the West in 2013 with the KTM 250 SX-F thanks to a narrow two-point championship success over Eli Tomac.  Jason Anderson (2014 West) and Marvin Musquin (2015 East) followed.

4) Red Bull KTM had to wait even longer in the 450SX premier class. 11 years after Langston’s breakthrough Ryan Dungey crossed the finish line first with the KTM 450 SX-F in Phoenix on 14th January 2012. He would add three more wins that season and accumulate 27 in total (including three championships) until the end of 2017 when he retired.

5) For the last 15 years AMA 450SX Champions have also earned the distinction of ‘FIM World Champion’ due to the international governing body’s association and working link with the sport.

6) Dungey’s consistency and work with Red Bull KTM Factory Racing helped the brand become the most prolific name of the last half decade of supercross. His three titles in 2015-16-17 were followed by Cooper Webb’s fantastic effort in 2019. The American won 7 Main Events in his maiden season for KTM, waiting only two rounds before his first (at Anaheim II). 2019 was KTM’s best inside the stadiums. The KTM 450 SX-F was the outstanding motorcycle in the gate with 10 victories from the 17 rounds in the hands of three riders (Webb with 7, Marvin Musquin with 2 triumphs and Blake Baggett with one) and three bikes in the top six of the standings.

7) Watch the progress of Cooper Webb (2020 runner-up), 2020 title-holder Eli Tomac and 2018 #1 Jason Anderson this season. Why? Premier class medal winners have a tendency to repeat their feats. In fact, you have to go all the way back to 1997 and Jeff Emig to find the only example of a one-time champion. Who holds all the records? Despite his last success coming in 2000, Jeremy McGrath still boasts the most crowns (7) and wins (72) as well as the most in a season (14) and in-a-row (13); both of those last two achievements were matched by Ricky Carmichael in 2001.

8) Could Red Bull KTM’s Marvin Musquin be a dark horse? The 31-year old is entering his 11th season of supercross racing, all with Red Bull KTM. The former double FIM MX2 World Champion and 250SX East Champion missed 2020 through injury: it was the first time in four years that he couldn’t register at least one 450SX Main Event triumph. He entered the class as a rookie in 2016.

9) The 2021 series is aiming to reach 17 rounds between January 16th and May 1st but is only visiting seven stadiums as the COVID-19 pandemic is still in full flow. Four of the sites (Houston, Indianapolis, Arlington and Atlanta) will run tripleheader races in one week with a Saturday-Tuesday-Saturday schedule. For the first time AMA Supercross will not visit the state of California; home of KTM North America (based in Murrieta, south of Los Angeles).

10) Too close to call? For the last four years the 450SX championship decider has gone down to the final round. The rules state that in the event of a tie the title is determined by the highest number of Main Event wins. If still equal, the riders are separated by the number of second position finishes then, if necessary, 3rd position results are counted. The ultimate tie-breaker will be the result of the final race of the season.

11) A memorable moment! In 2012 Ryan Dungey created one of the more memorable sights in recent years of Supercross racing. After damaging his gear lever on a tuff-block in Las Vegas for the season-ending Monster Energy Cup (MEC), the Red Bull KTM man resorted to shifting with his hand while using air-time at the Sam Boyd Stadium. Dungey, who had made his Red Bull KTM Factory Racing debut at the same event the previous year, still managed to finish second overall at the one-off annual invitational.

12) Red Bull KTM have won the MEC just once since the event’s inception in 2011, thanks to Marvin Musquin, who also pocketed the 1-million-dollar bonus prize in 2017 (only three riders have banked the seven-figure check). There is no word on the traditional Vegas curtain-closer for 2021 and, aside from the money, the spectacle and the possibility for teams to use the October fixture as a chance to test for the following campaign, the MEC has allowed AMA Supercross promoters Feld Motorsports to experiment with the supercross format. The MEC has staged novelties such as longer, simplified tracks, split starts, Joker Lanes, open technical regulations and triple moto billing; the last feature entered the AMA Supercross calendar as ‘Triple Crown’ contests three years ago.

13) In 2021 Red Bull KTM will again have representation in two classes and will run two different bikes for the first time in six years. 250SX duties had previously been filled by the Troy Lee Designs team but youngster Max Vohland will steer an official Red Bull KTM 250 SX-F alongside the KTM 450 SX-Fs of Cooper Webb and Marvin Musquin.

14) Will KTM soon repeat their finest ever evening of Supercross? At Anaheim 1 in 2014 Ken Roczen and Ryan Dungey took their KTM 450 SX-Fs to first and second positions respectively at the opening race of the season while Jason Anderson used his KTM 250 SX-F to win the initial 250SX West round. Orange everywhere!