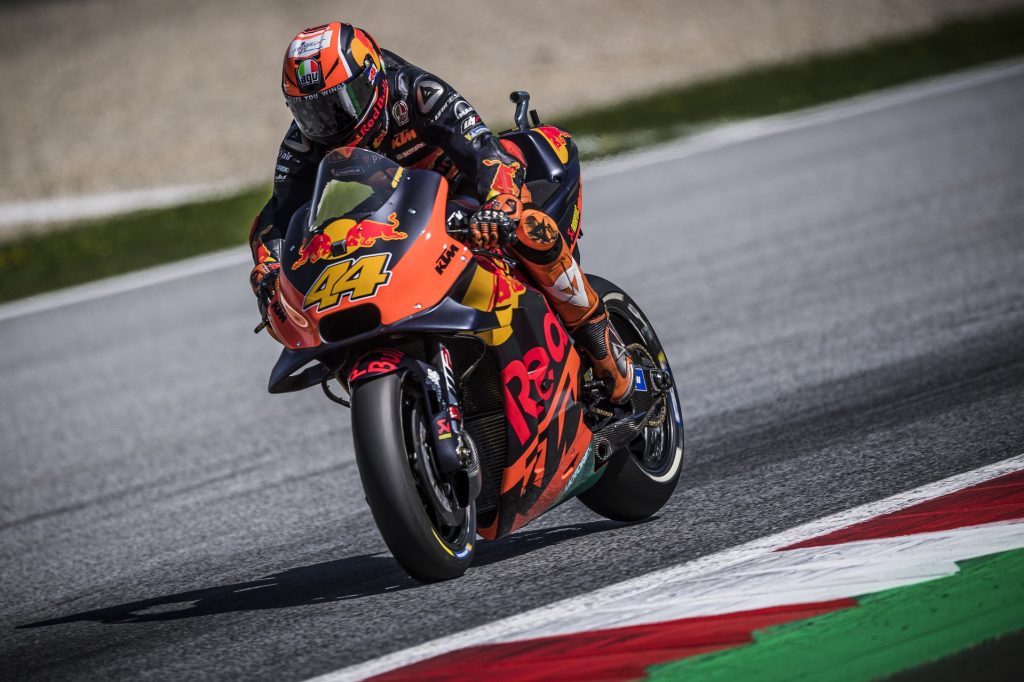 THE ART OF BRAKING IN MOTOGP™ AND HOW TO MASTER IT

Getting to the finish line first is what MotoGP™ is all about, but to make that happen, you need to be able to scrub off speed efficiently. We take a closer look at how braking force supplier extraordinaire Brembo successfully control the negative acceleration forces for all four Red Bull KTM Factory Racing MotoGP™ riders. 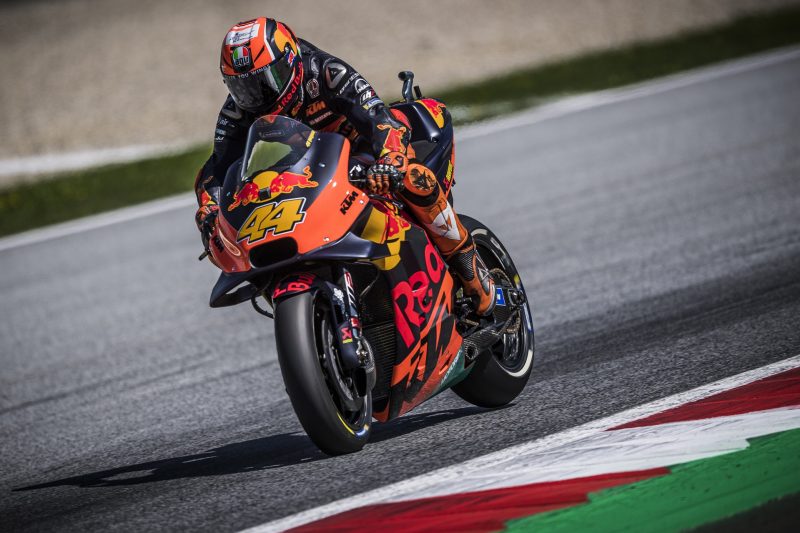 A braking system has to be as powerful as any engine; without it, riders would be better off in a drag race. Obviously, electronics play a big part in controlling power, but when push comes to shove something has to slow the massive horsepower the KTM RC16 unleashes. Partly, it’s down to the electronically controlled engine braking, but that leaves a lot more slowing the bike down to be desired. That’s where brakes come into play.

Every single team in MotoGP™ – with Red Bull KTM Factory Racing and Red Bull KTM Tech3 being no exception – employs the services of Italian manufacturer Brembo S.p.A, who have been honing GP braking tech since the early 1980s. It’s an interesting yet naturally occurring monopoly. Unlike in the tires department, there’s no control brand when it comes to brakes in MotoGP™. Going with Brembo S.p.A is a choice made by the lot of them for the past three seasons. 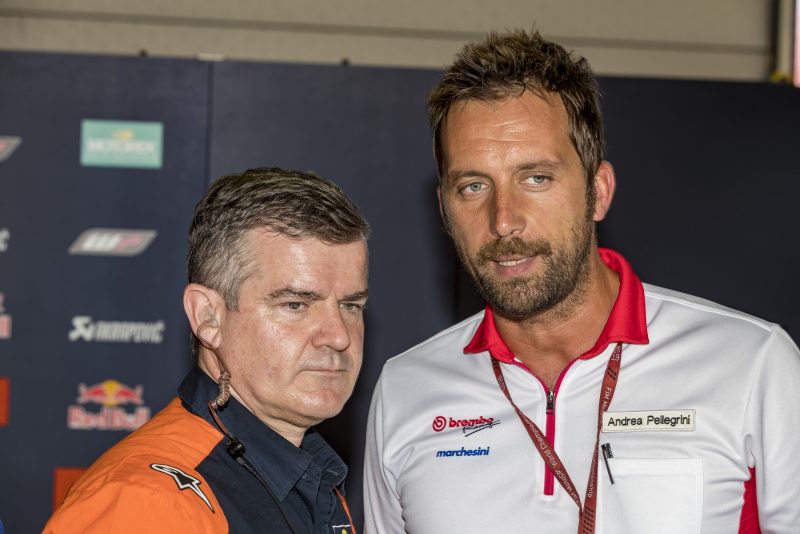 “Of course, that is a major compliment to the company,” explains Brembo’s chief engineer in MotoGP™ Andrea Pellegrini. “We’re very proud to have our products on every bike on the grid, but quite frankly we would really welcome the competition.” Andrea’s job is to keep each of the riders happy, but that’s no simple job. Or at least, that’s what his subtle smirk gives away. “All riders are always on the lookout for something more, something better. Not just in terms of horsepower, but in braking as well.”

In order to cater to the riders’ needs, Brembo has quite the team ready to serve KTM and other manufacturers. At Brembo’s motorsport division in their hometown of Bergamo, 300 people are constantly developing newer and better parts, with MotoGP™ and Formula 1 taking up the largest part of their day to day work. 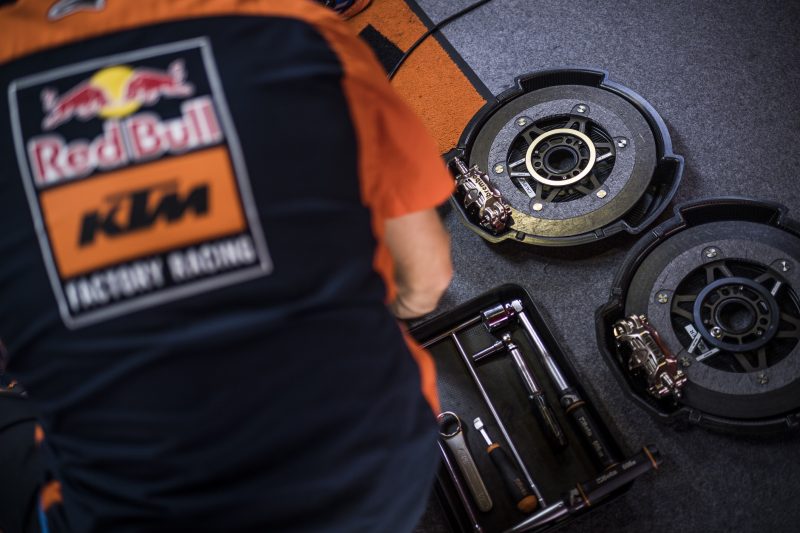 Endless possibilities
Bergamo is located just northeast of Milan, where engineers work on different sorts of MotoGP™ braking parts. In order to give Pol Espargaró, Johann Zarco, Miguel Oliveira, and Hafizh Syahrin the best possible means to slow their racing machines down, Brembo brings a massive array of parts to the track.

On top of that, Brembo also offers high-mass discs. Though they add extra speed scrubbing capability, they are a bit heavier than ‘regular’ brake discs. And then there’s the steel disc, used only in wet weather conditions. “We’ve been seeing a slight change in that riders are choosing the carbon-carbon discs in the rain now,” Pellegrini says. “The mechanics do mount a cover around the discs to stop the rain from cooling the discs to below their optimal operating temperature.” 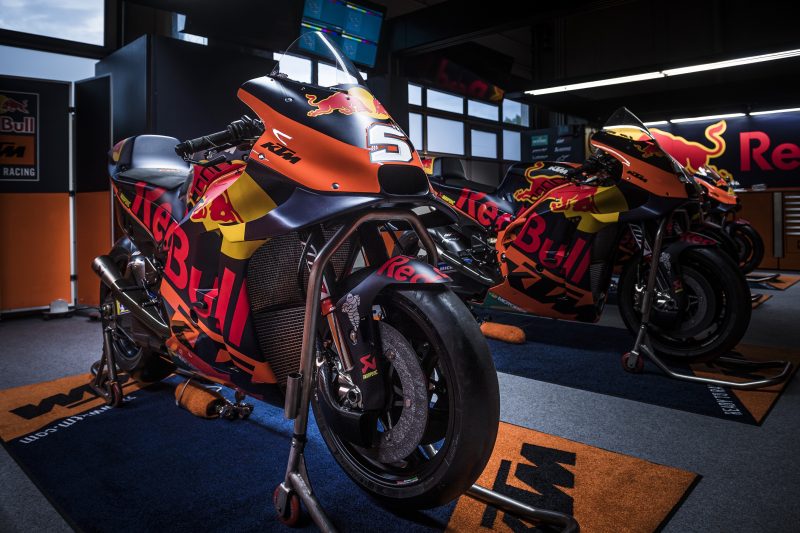 In terms of master cylinders, calipers, pads and pad compounds, the variety of choice makes for endless possibilities. Pellegrini: “There’s nothing weird about the amount of variation we see among riders. Brakes are a very important piece of the puzzle that makes up a competitive race machine. Which parts are picked differs from one rider to the next. It’s all down to them; what suits them and their style of riding and braking. It’s down to the team to come up with a stable configuration for their rider to be able to trust his brakes. Swapping over and interchanging parts often doesn’t help the rider. They need a constant ‘brake feel’ in order to be fast.”

According to Pellegrini, KTM RC16 mounted riders tend to stick to similar setups. “Both at the factory outfit as well as with Tech3; differences are minimal. They all seem to walk the same path in terms of brakes.” Brembo’s chief engineer knows just how well the KTM RC16 is on the brakes, though margins are minute. The rider’s riding style determines a lot in braking. “Contemporary GP bikes are very similar in terms of braking performance – once again with slight differences here and there. Some teams move the brake bias forward slightly, while others focus more on using the back brake. In the end, differences like that come down to a certain setting in suspension or engine braking, desiring a particular brake bias – more forward based or more towards the rear of the bike.” 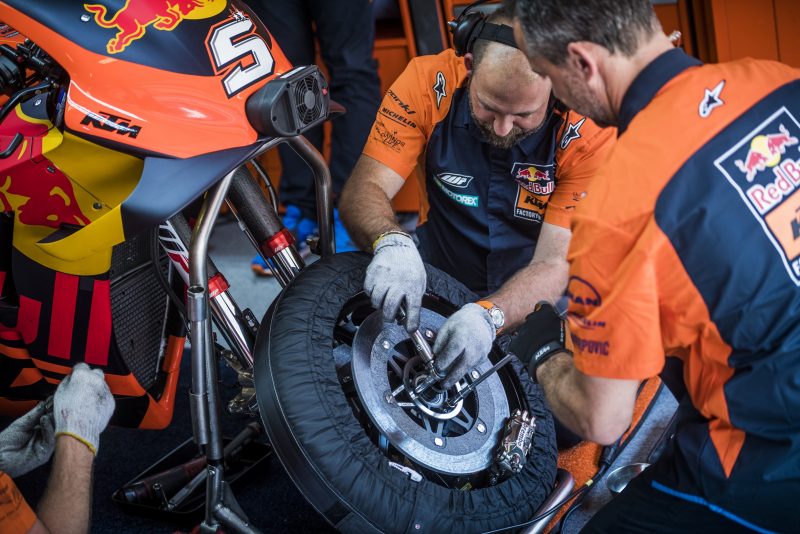 Grip is everything
Brake performance comes down to much more than just what Brembo brings to the table. The Michelin controlled tire plays a big role in this. “When MotoGP™ switched from Bridgestone to Michelin, riders were presented with a completely different brake feel, even though the brake system itself did not change. The Michelins offer far better grip, especially at the front, which allows for much better braking. Front end grip is the key to good braking performance. Without it, it’s impossible to slow the bike down. If you lack grip, the front tire would lock up and start to slide. The fact we can work with the extra grip from the Michelins really helps our brake systems to perform at a high level.”

Another recent change in MotoGP™ also helps Brembo’s product to perform well. Pellegrini: “Aerodynamics are coming into play, which adds even more grip. That ups the ante even more when it comes to braking, allowing for later braking. Obviously, that puts even more severe forces on the brake system, but our components can handle those forces fine.” 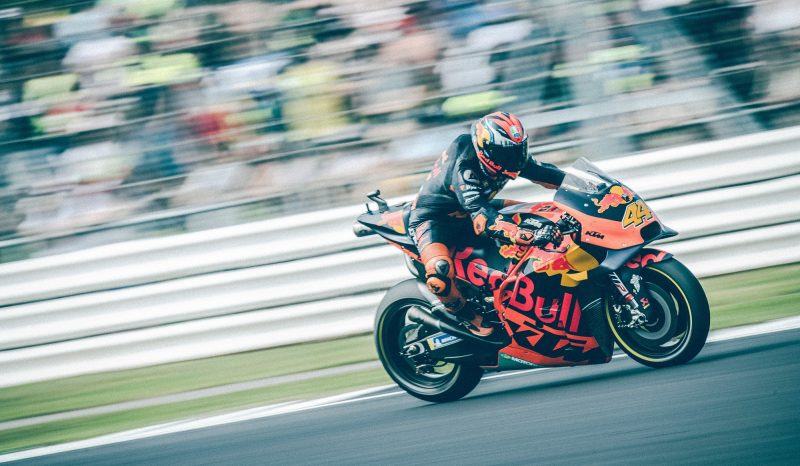 In order to react to the constant changes in Grand Prix racing, Brembo is constantly working to improve their braking systems. In order to keep up, the Italian manufacturer gathers as much data as possible. The massive array of sensors that adorn MotoGP™ bikes nowadays also helps Brembo gain valuable data, like G-forces, brake distance, bike velocity and the temperatures that go with it all. These data helps Brembo improve brake components.

“At the moment, development is focused on master cylinders and brake calipers. Those parts are constantly evolving, mostly because we’re allowed. The rules don’t allow for much when it comes to brake discs.” If it were up to Pellegrini, there should be more room for different materials. “Carbon ceramics would be interesting for MotoGP™. It’s much lighter than carbon-carbon and wear is minimal. It would greatly improve the lifespan of a brake disc.” 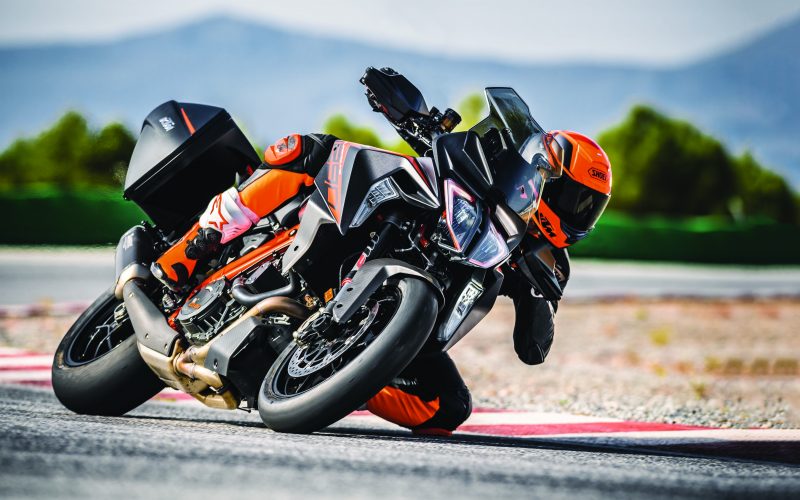 Rule of thumb
A recent development that has seen a lot of interest, is the thumb brake. It’s been used on race bikes since the early 90s, but more and more riders in MotoGP™ are trying it nowadays. The use of the thumb brake first came to the forefront after five-time world champion Mick Doohan was terribly injured at the Dutch Assen track. It was Brembo that came up with the solution of using the thumb to brake.

Several riders saw benefits in using a thumb brake, but the idea never really caught on. It wasn’t until a few years ago, when thumb brakes started to become a big thing in GP racing. Recently, a couple of riders have been testing a new system that employs a lever similar to the front brake lever, though it’s used with the left hand and mounted parallel to the clutch lever.

“These days riders really only use the clutch once during a race; for the start. So it’s perfectly okay for them to use their left hand to slow down the rear tire,” Pellegrini explains. The Italian expects more and more riders will start using the system. “A few riders have shown interest in the new rear brake setup, but I don’t expect riders to switch over mid-season. Just wait for winter testing; I believe you’ll see a couple more guys operating the rear brake like that.” 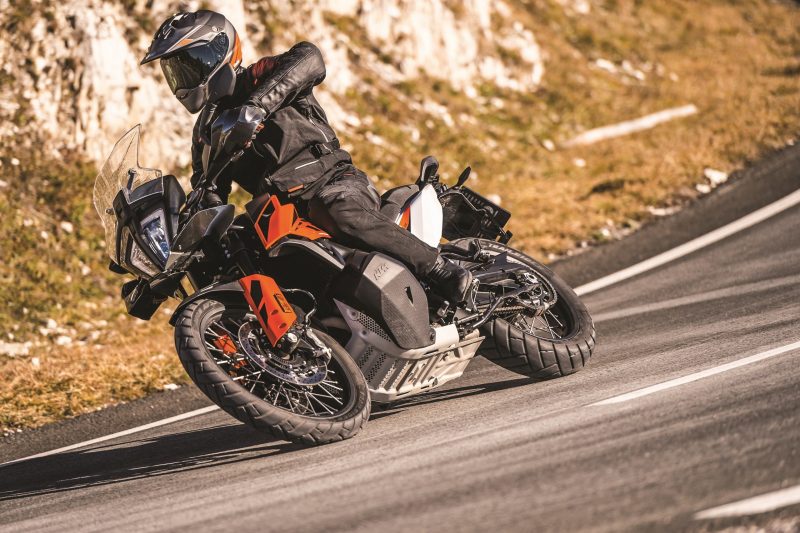 The experience and technology going into MotoGP™ eventually end up on road bikes. Though carbon discs are not an option, there’s still loads of GP-derived braking technology on modern road bikes. Take the radial caliper mounting for instance, or monoblock calipers; born and bred on track. Recently, Brembo launched the GP4-MS caliper; also developed on the race track. “We’re not the only manufacturers that use racing to help develop motorcycle parts. Most bike riders will tell you brakes have taken a massive leap over the last few years. MotoGP™ development won’t stop, so Grand Prix technology seeping into road bikes won’t stop either.”