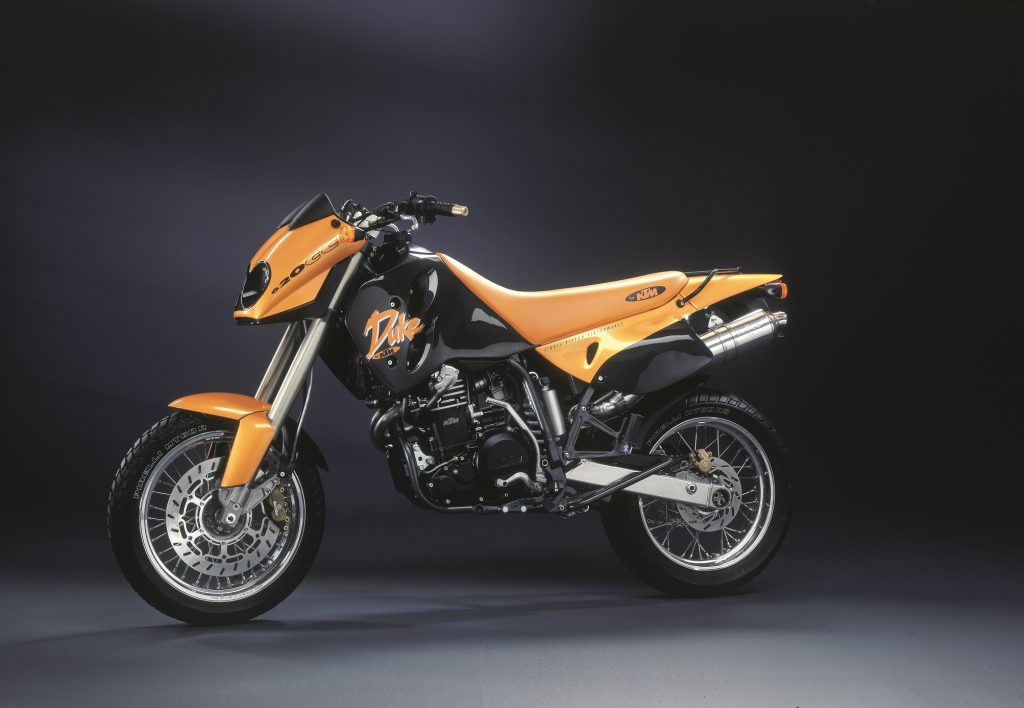 Celebrating 25 years from the release of the very first KTM 620 DUKE back in 1994, we take a closer look at the impressive history of KTM’s iconic single-cylinder machine through the last quarter of a century. 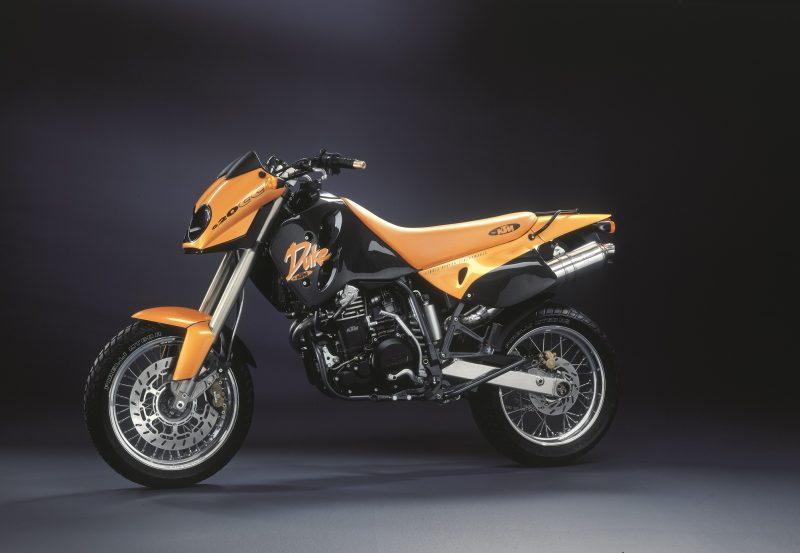 With KTM starting its journey as a motorcycle manufacturer in 1953, visitors at the KTM Motohall will find three milestones in the brand’s 66-year-long history on display in Mattighofen. Alongside the R 100 [1953] and the Penton Six Day 125 [1968] – which kickstarted KTM’s rise into becoming the world’s leader for off-road bikes – visitors at the KTM Motohall can admire the model year 1994 KTM 620 DUKE, KTM’s first road bike with a 4-stroke engine.

After the former KTM Motor-Fahrzeugbau AG became insolvent, KTM Sportmotorcycle GmbH was launched in January 1992. The new company was keen to learn from the mistakes of the past when, at times, over 40 different types of machine had been in production at the same time, from bicycles to numerous different mopeds right through to off-road bikes. With this in mind, KTM focused in particular on the ultra-modern LC4 engine, a liquid-cooled single-cylinder 4-stroke engine, making it the envy of its Japanese competitors. The concept was simple: stick to just the essentials and build a high-performance and high-quality machine around the potent single-cylinder engine that was already winning in top level enduro competition.

Even the E-starter was left out to begin with. Of course, it was clear that KTM would not be able to survive in the long term with just the Hard Enduro and a small range of 2-stroke Enduros and e-start bikes, so the developers soon started thinking about a road bike, also powered by the LC4 engine. At the time, supermotard replicas were vastly popular: these were easy-to-handle motorcycles based on Enduros, but with 17-inch road wheels—the term “supermoto” was still unknown at this point. Riding these fun bikes along windy lanes could drive the riders of significantly larger motorcycles to distraction. A bike like this—practically a go kart on two wheels—was a logical choice as there was already a suitable vehicle to base it on in the KTM 620 ENDURO. 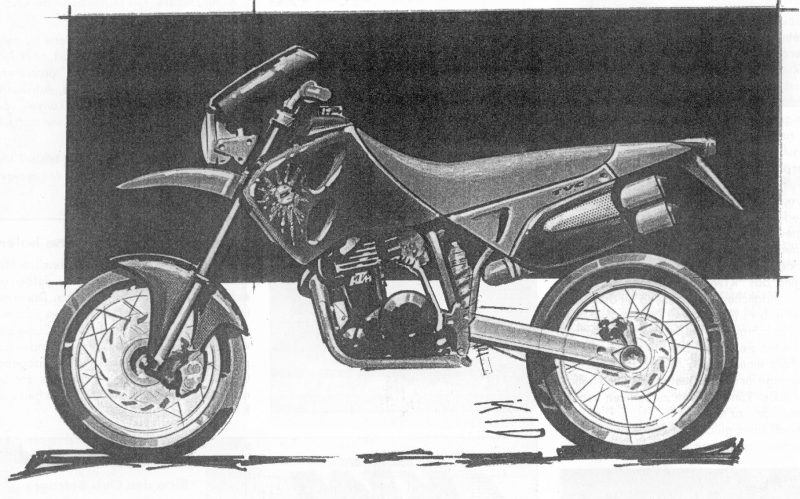 KTM designer Gerald Kiska’s initial design still bore the now-long-forgotten project name “Terminator”. Nonetheless, it was nearly impossible to tell that this bike was based on the Hard Enduro. A striking front fairing with ellipsoid double headlights combined with an orange-metallic paint job gave the DUKE its unique appearance. With 50 hp, the KTM 620 DUKE was the most powerful single-cylinder on the market at the time.

There is also a nice story behind the name. Two weeks before the presentation, the exhibition bike still needed a distinctive name. Project Manager Wolfgang Felber recalls that he was on his way to the executive floor with a list of different suggestions when he ran into Kalman Cseh, who was responsible for these matters, on the stairs. Cseh liked the suggestion “Duke” right away; not so much due to its reference to legendary racer, Geoff Duke—who was almost unstoppable in the 1950s on his Norton single-cylinder bikes—but more for its royal connotations. Ultimately, the stickers designed by the graphic designers did include the English multiple world championship winner’s nickname, “The Duke”, so he was indeed honored after all. 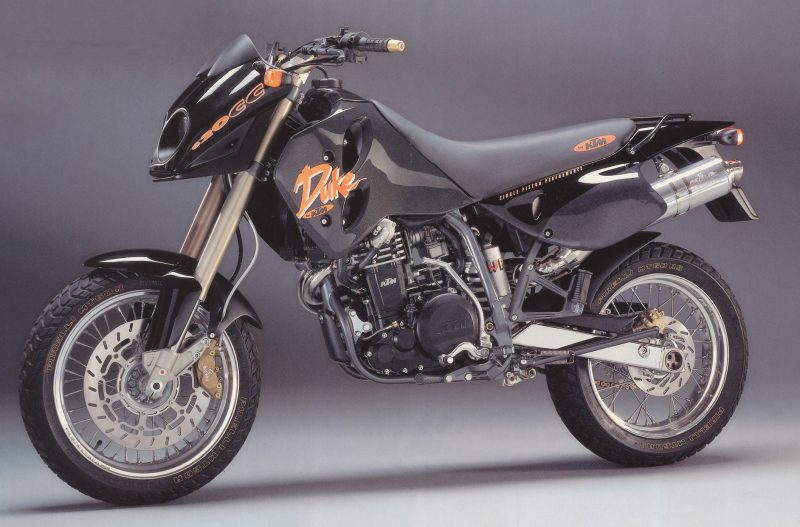 The DUKE—today often called DUKE I to distinguish it from later models—was only available each year in a limited run and in a certain color: orange in 1994, black in 1995, yellow in 1996, black again in 1997 and the “last edition” in 1998, which already had the larger 640-cc engine, was orange once again. So, exclusivity was also included in the price.

After this, between 1999 and 2006, the KTM 640 DUKE II was built, still considered by many to be another two-wheeled piece of art. Gerald Kiska had perfected the edge design familiar from the automotive sector for motorcycles and since then all KTM motorcycles have borne Kiska’s angular lettering. And long before anyone in the automotive industry had thought of LED headlights, the KTM 640 DUKE II was the only motorcycle recognizable as a KTM just from a glance in the mirror. This was due to its two ellipsoid headlights, one on top of the other, a unique styling element in the motorcycle sector.

For many years after the “original DUKE”, there weren’t even any KTM bikes with two headlights, let alone with two of them positioned one on top of the other. With slender cast aluminum wheels and two silencers directly underneath the seat, it was no longer possible to tell that this bike was based on an Enduro. As with the first DUKE before, the DUKE II was available in a different color each year. Titanium, orpheus black, arctic white, chili red and lime green were just a few of the options. The DUKE II also remained rather exclusive, not least due to its elevated price. 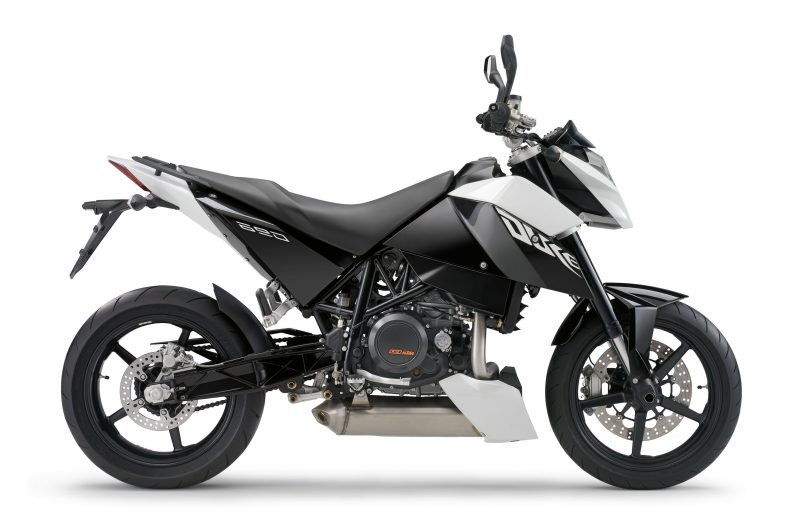 The highlight at the 2006 INTERMOT 2006 motorcycle show was the polarizing KTM 690 SUPERMOTO, which was to be the forerunner to a whole range of sporty KTM single-cylinders. The completely redesigned single-cylinder with electronic fuel injection reached 63 hp, meaning KTM could still boast the ‘blue ribbon’ of the most powerful single-cylinders among its portfolio.

The third generation of the DUKE, which followed in 2008, was different to its two predecessor models in that it bore no similarity to an Enduro, either visually or technically, but had been designed from scratch as a road bike. Highlights included the steel tube frame, a cast swingarm and above all the short silencer underneath the engine, as previously featured on the KTM RC8 superbike. In 2010, the KTM 690 DUKE R followed, upgraded with a host of KTM PowerParts and easily recognizable thanks to its orange frame, a feature of all KTM R models. 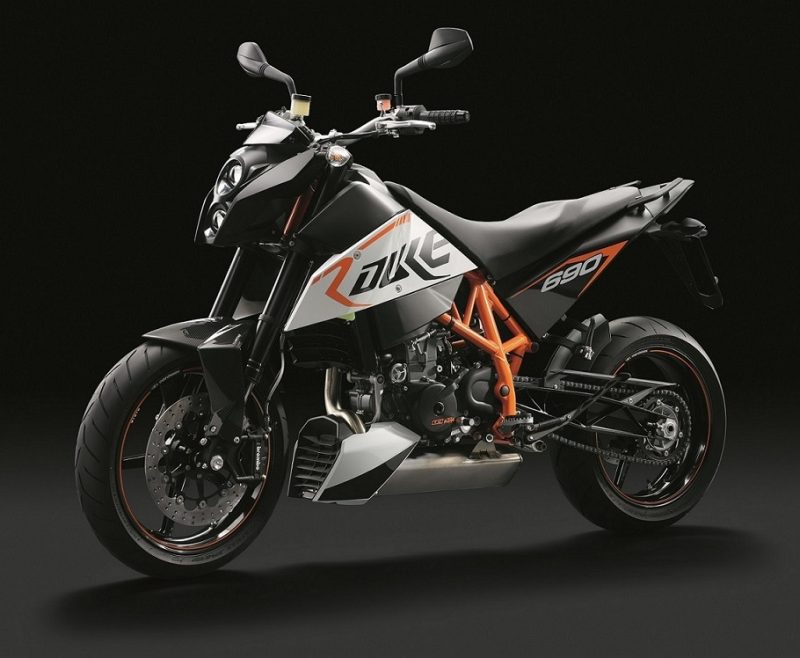 A successor to the KTM 690 DUKE III then came in 2012, with space for a passenger and long-distance capability. The engine now had a full 690-cc capacity, so the DUKE retained its status as the most powerful single-cylinder engine available. The KTM 690 DUKE R was considerably more sporty in terms of its look, tuning, and seat position.

The current version of the KTM 690 DUKE has been around since 2016. With an advanced electronic engine management system and a second balancer shaft, the 690 LC4 engine offers a level of sophistication previously unseen in a single-cylinder engine, while delivering an impressive 73 hp.

What began 25 years ago with a now legendary cult classic continues today with the KTM 690 DUKE, with its modern styling and state-of-the-art technology. All this means that the DUKE has remained the most powerful series-production single-cylinder motorcycle for a quarter of a century. 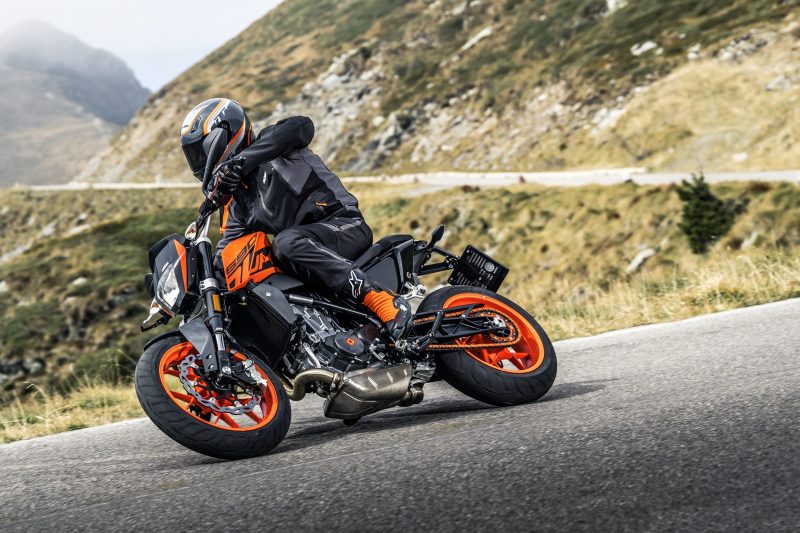 The very first KTM 620 DUKE and some of the most iconic DUKE models ever produced can be viewed at the KTM Motohall. 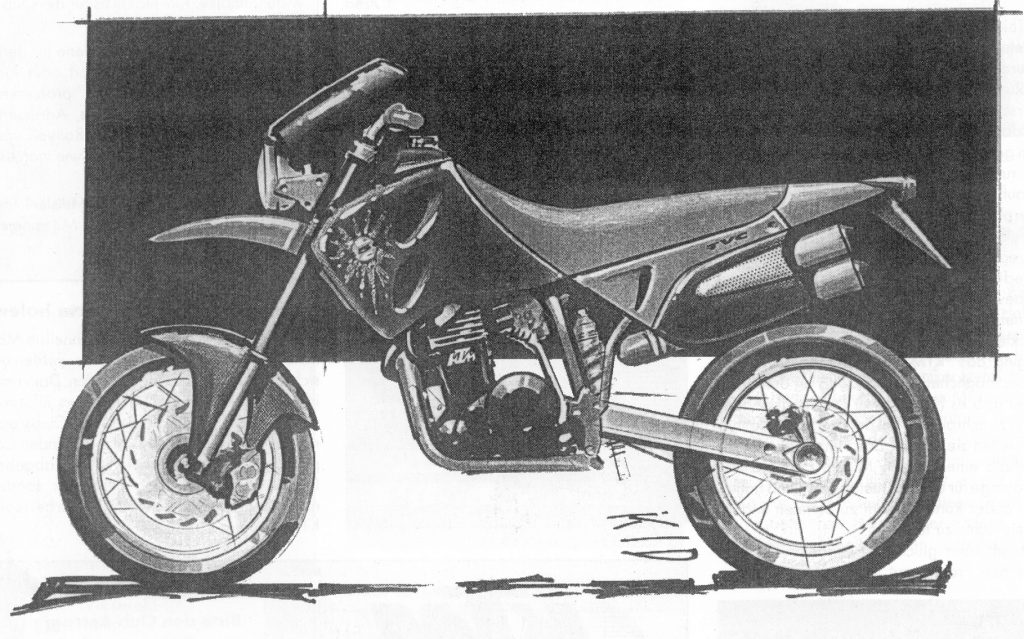 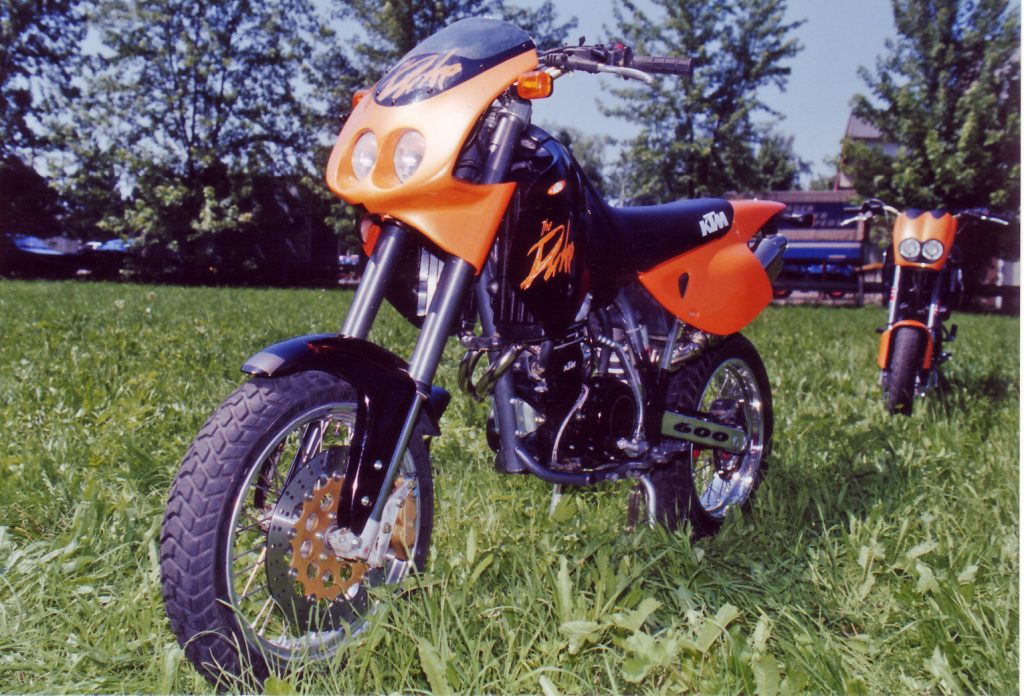 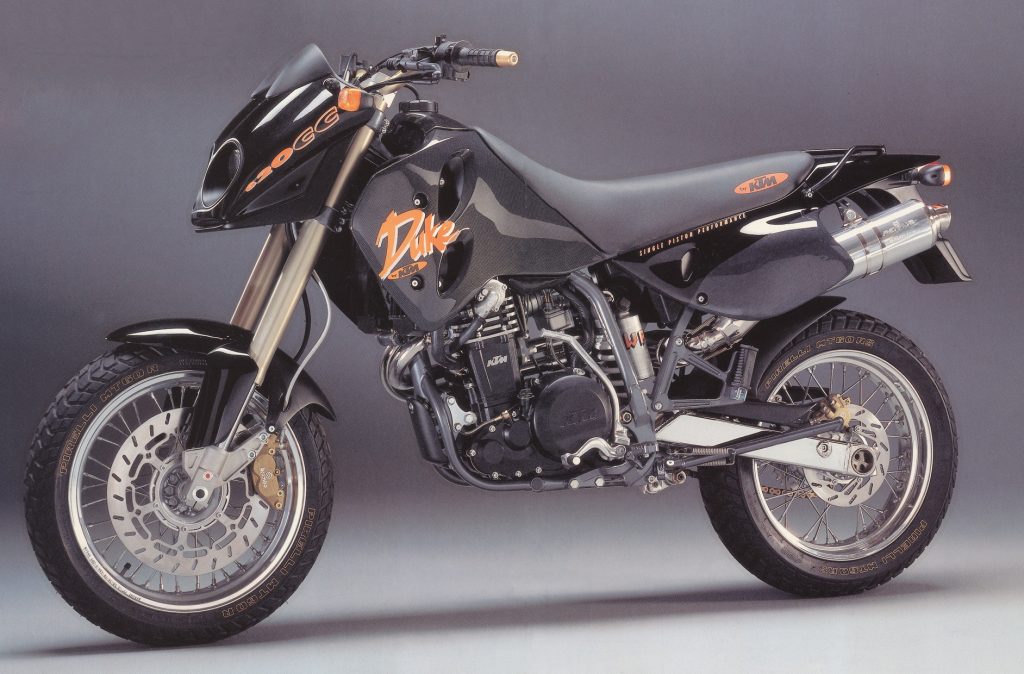 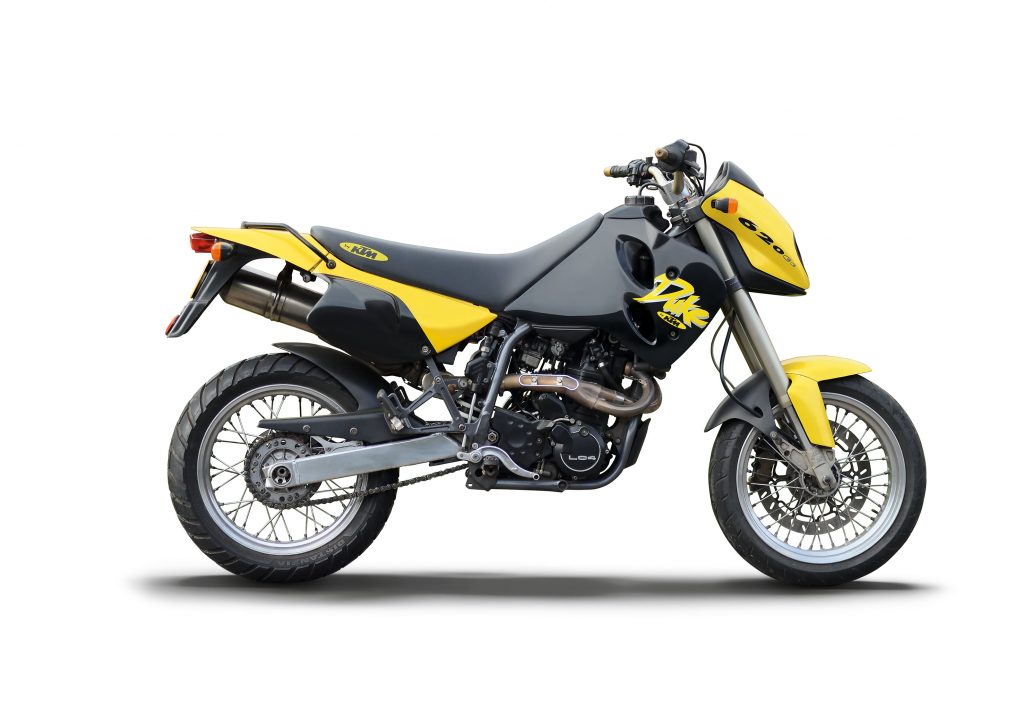 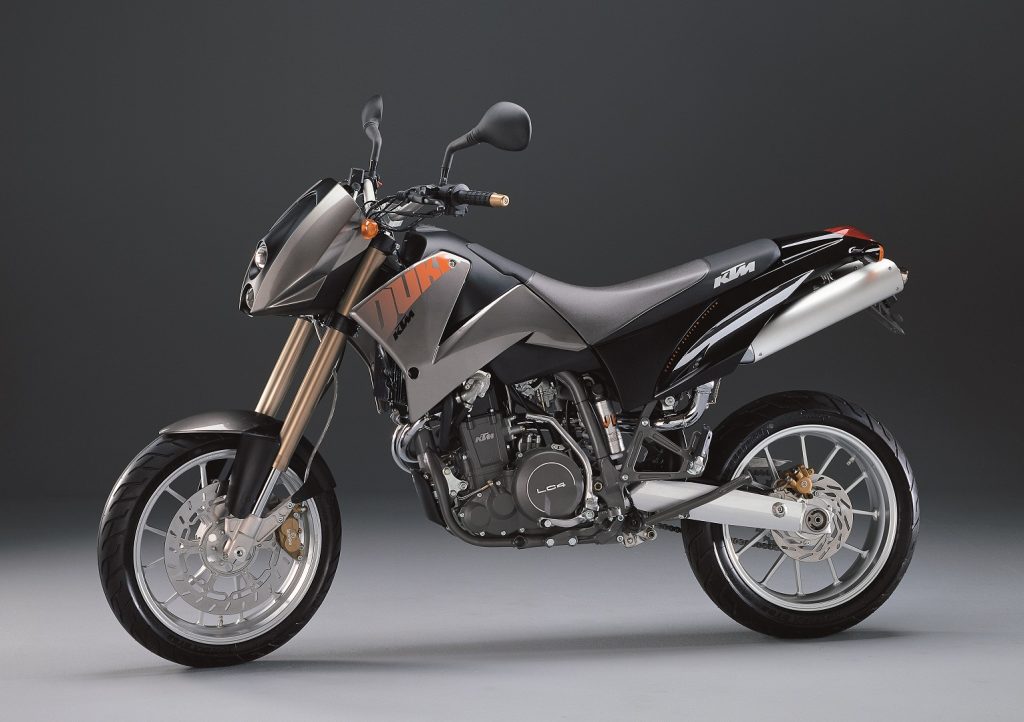 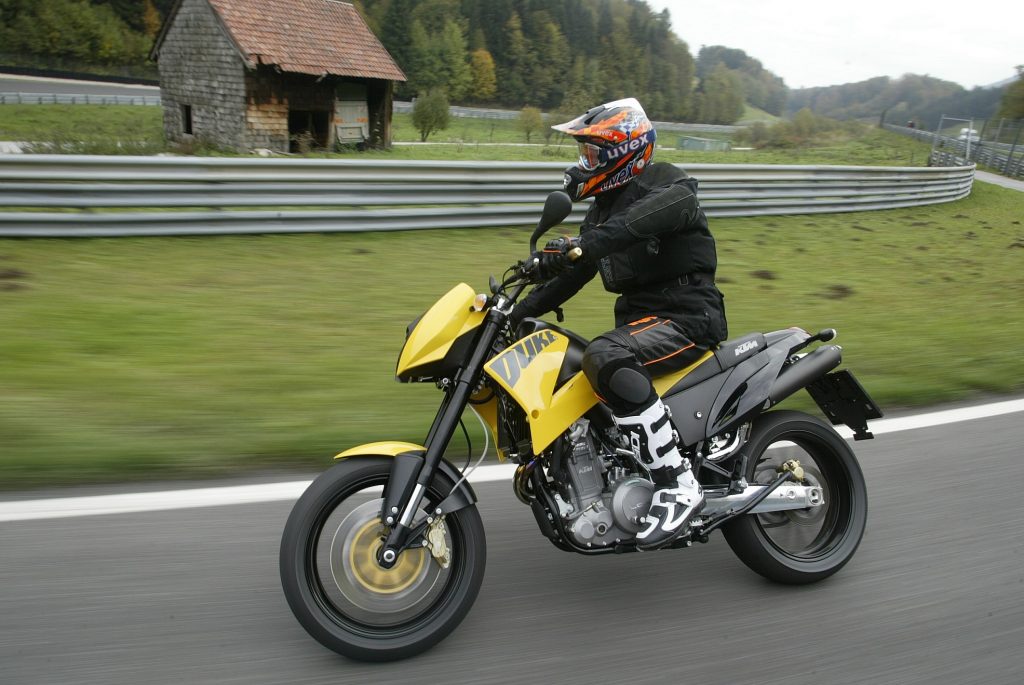 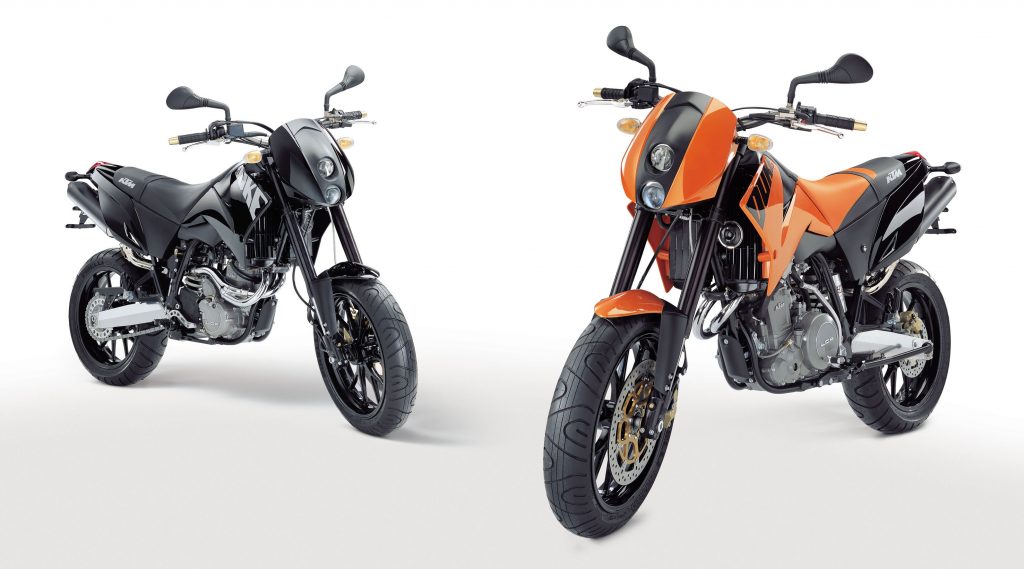 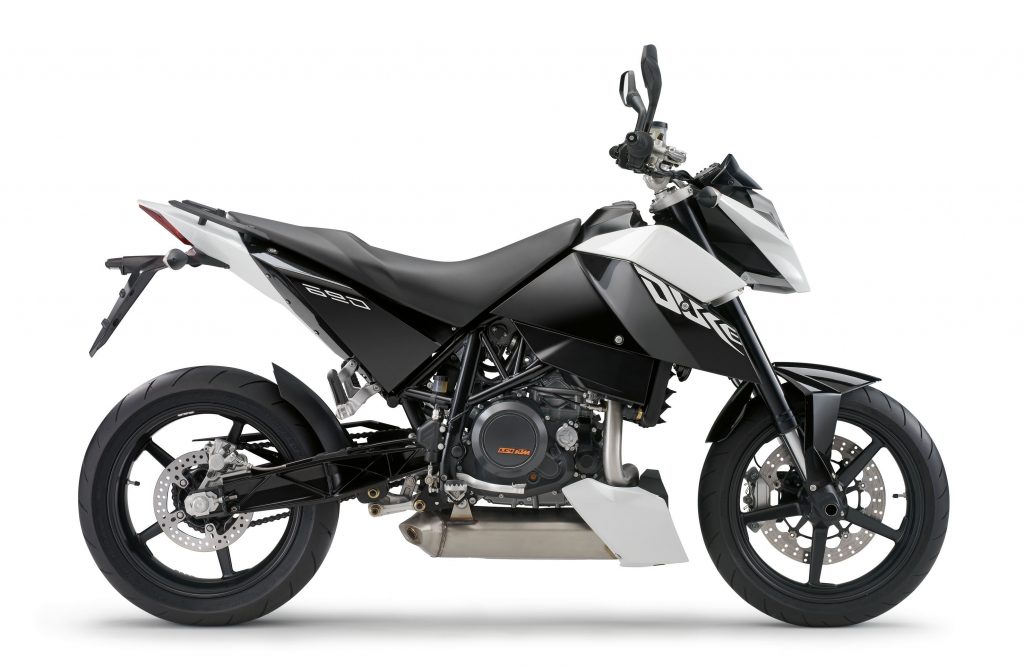 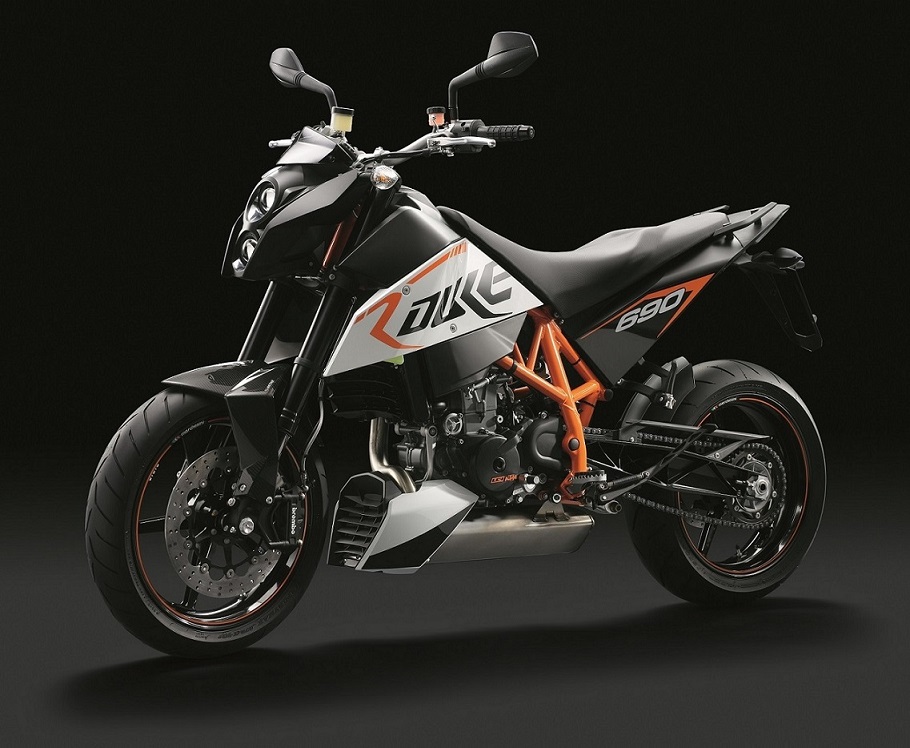 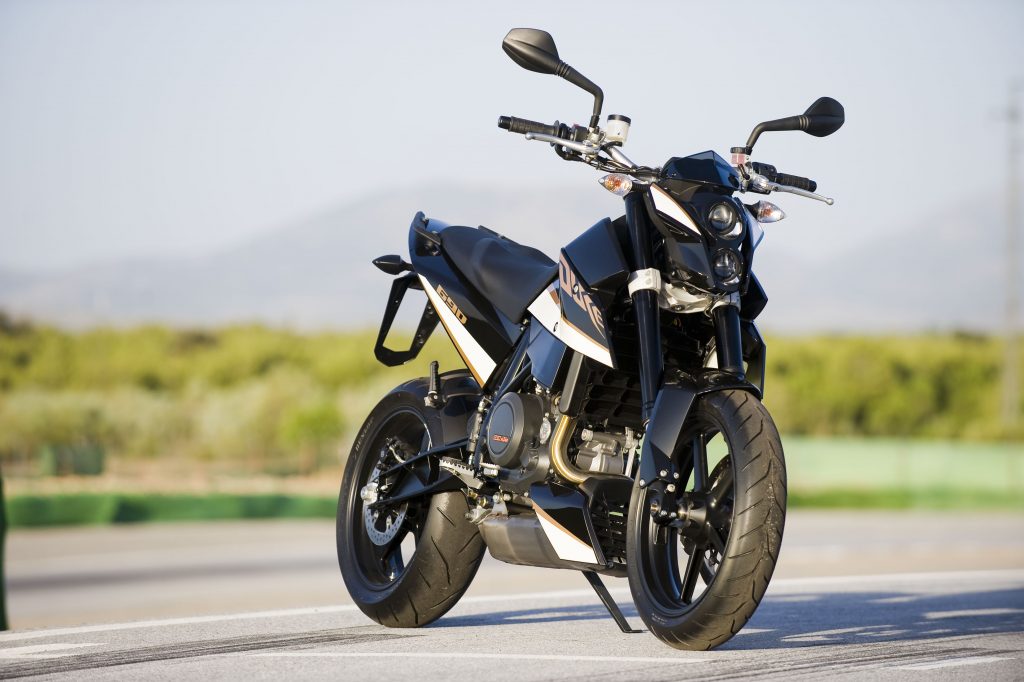 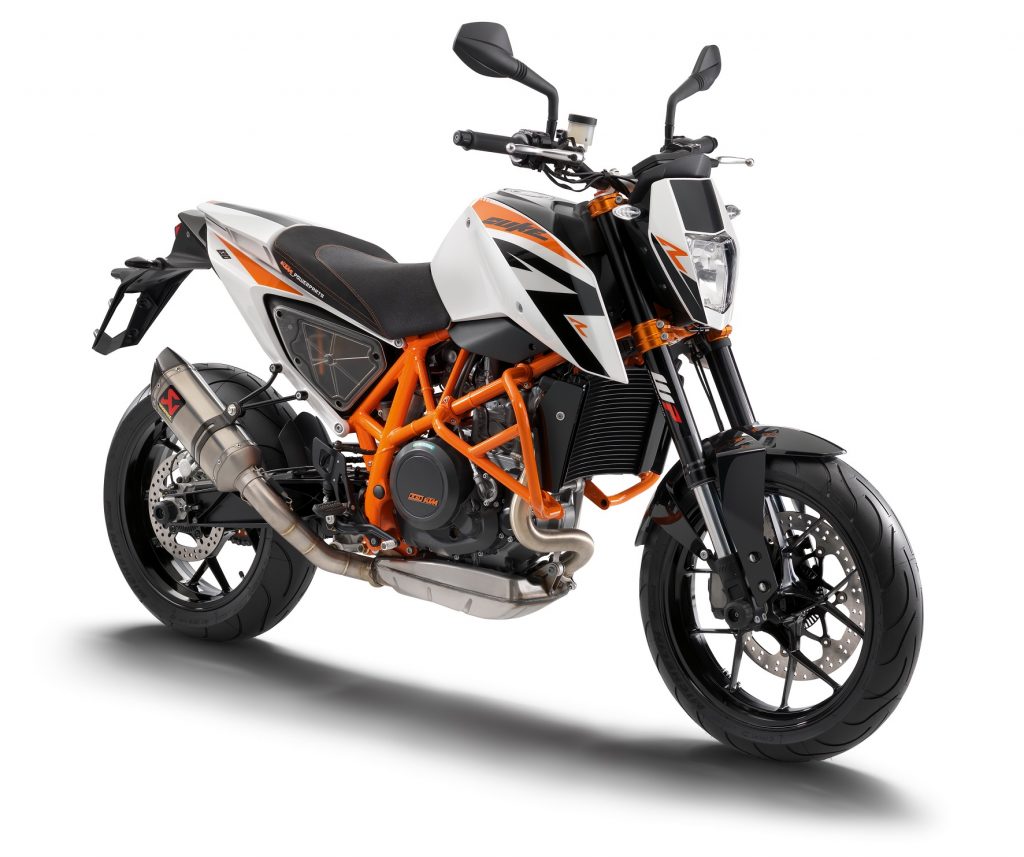 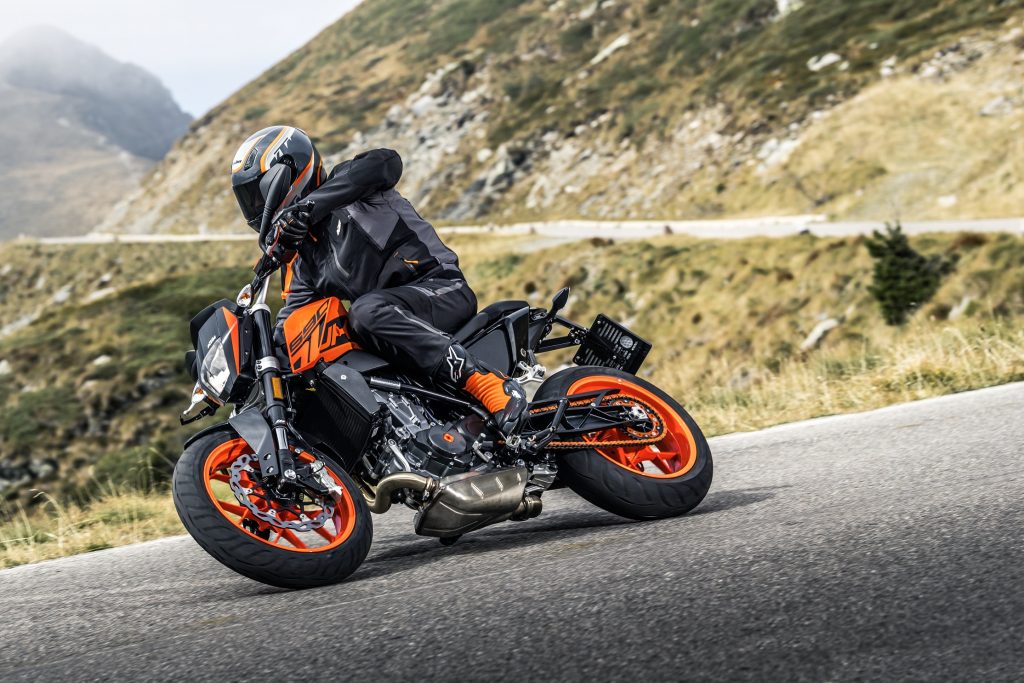 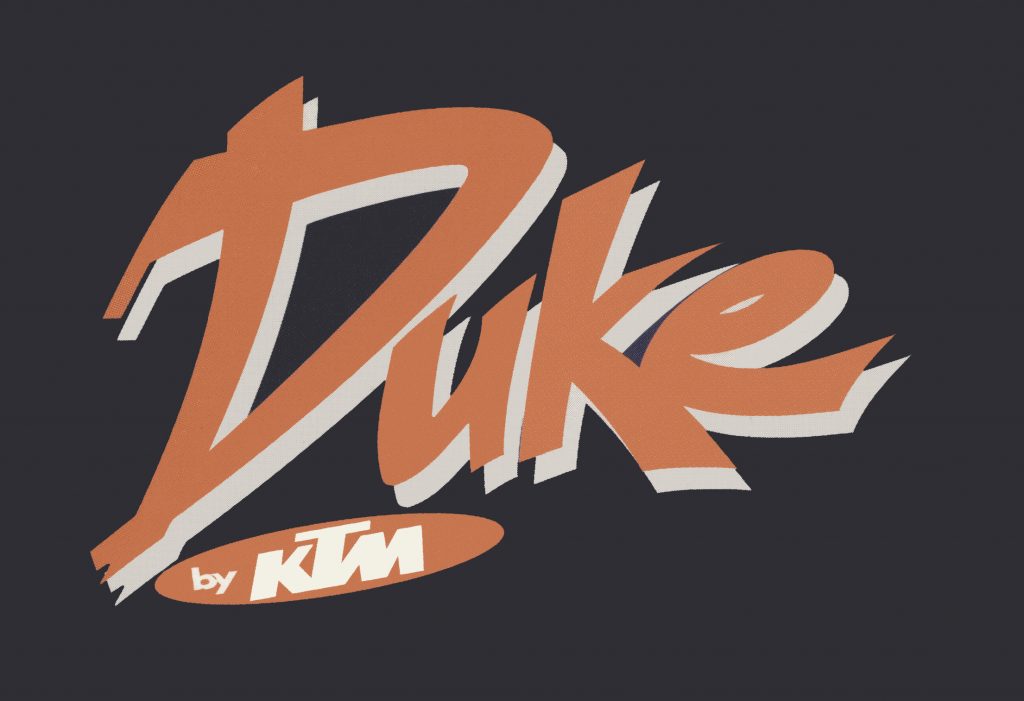