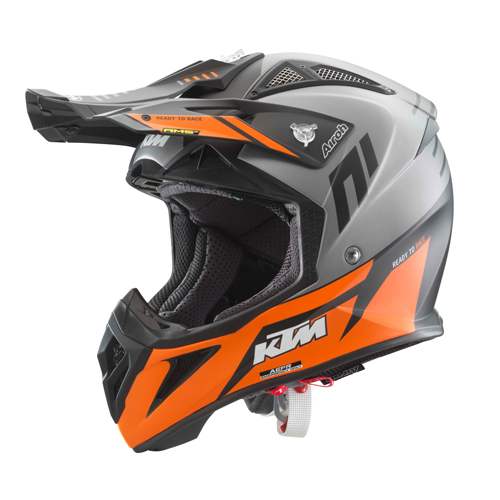 The most decorated motocross athlete of the century, Tony Cairoli, has claimed all of his nine FIM World Championships while helping and using Airoh helmets. The Italian star talks about his role in forging the Aviator 2.3 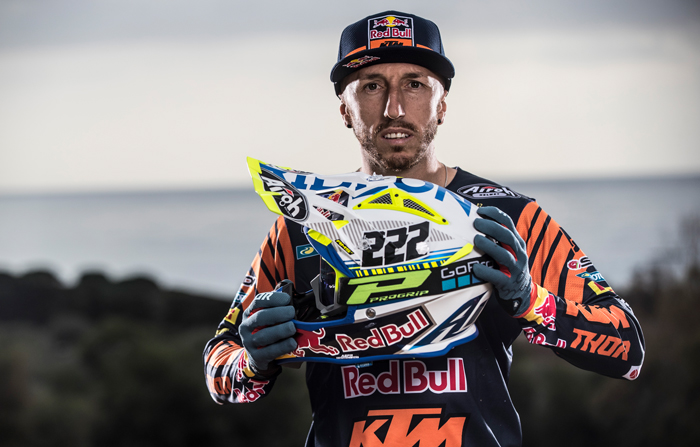 Tony Cairoli has been working closely with Airoh helmets for many years.
PC JP Acevedo

Like some of his Italian motorcycle racing peers, Tony Cairoli has become synonymous with one particular helmet brand. Since the Red Bull KTM rider’s second Grand Prix season in 2004 the #222 logo has been a common sight on Airoh helmets, firstly in the MX2 class (two titles) and then the MXGP category (formerly MX1) that Cairoli routed between 2009-2014 and again in 2017.

The small but highly advanced manufacturer from close to Bergamo in northern Italy was born from the experience and knowledge of Antonio Locatelli almost 15 years ago and Cairoli was – and still is – one of their first, key ambassadors. “There is a big family feeling to the company,” says the 34-year old, who has remained with the same team mechanics and staff since that 2004 year right-up to the present day and has been in KTM colors from the start of the 2010 season. “The owner, Antonio, is always there and connected. He controls things and I still speak with him directly for my designs and my helmets. I like that atmosphere. It is a close working relationship and they work a lot and invest a lot, especially in safety.” 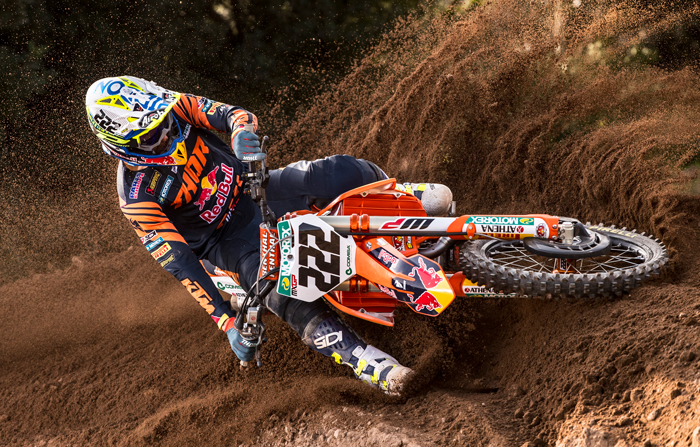 Cairoli wears the Airoh (actually an acronym of Ambition, Innovation, Resilience, On-Off, Heritage) Aviator 2.3; the premium off-road model. The Italians pride themselves on a variety of fabricating techniques to ensure optimum weight, comfort and effectiveness and this includes steam and injection molding then composite fibers and 3K carbon, layered by hand. A carbon kevlar fiber weave means the helmets are light and strong but the smaller details are not neglected such as UV resistant decals and hand-stitched inner lining. Airoh seems to mix the virtues of personal touch and high tech; an example being the delicate craft that goes into construction of the shell and AMS2 EPS while an in-house wind tunnel permits rapid and progressive development for aerodynamics, acoustic and thermo performance.

They are now one of the leading names in the vast off-road helmet sector but the journey to that status needed patience, education and some input from the sharp end of Grand Prix. 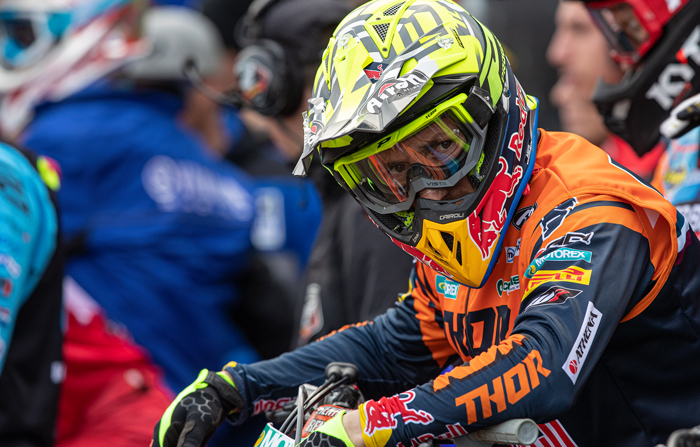 “There has been a big evolution,” opines Cairoli on the Aviator. “In fact, since 2009-2010 they made a big step compared to other helmets. I think a lot of manufacturers are quite close now but between 2006-2009 Airoh concentrated on pushing ahead of everyone else. First of all for the weight, but then for ergonomics and then comfort and feel. I think Airoh have made a very good helmet for a number of years.”

Cairoli was the initial guinea pig for Locatelli and his technicians to create the standards Airoh wished to reach with the Aviator. Compared to a street helmet, an off-road version needed to be suitably robust, well ventilated and exceedingly comfortable due to the extra physical effort and force a rider will be making on motocross tracks or trails. Airoh’s roots are in the dirt and Cairoli’s expertise is ingrained in the Aviator. “In the beginning I was giving a lot of feedback to improve the product but as the years go on and they get better and better it is difficult to find big things to change,” he says. “A lot of feedback is about fit, comfort, some ventilation and aerodynamics. At some tracks we have higher speed and you can notice differences. When you focus on helmet testing especially then you can feel the value of particular pieces.” 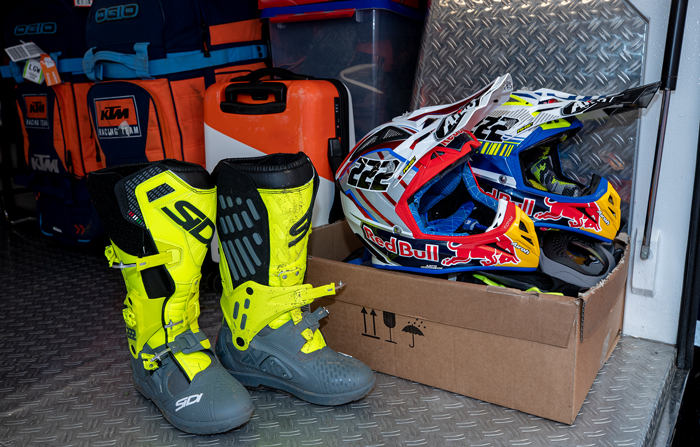 “Ventilation is always a big thing because you have to think about how it will link with the goggles,” the KTM man adds. “It is a big compromise and a commitment that Airoh make to be compatible and effective with the goggles on the market and the fit.”

“We can crash quite a lot and it is important to maintain the integrity of the helmet and the interiors. Another crash can be just around the corner so you must wear a fresh helmet or be sure about the condition of the one you have.” 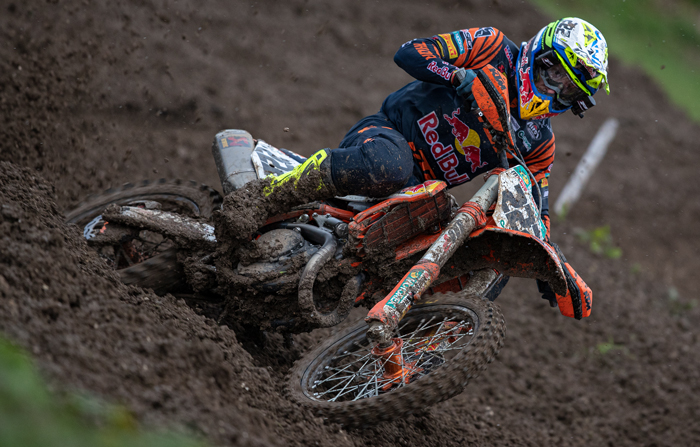 The Airoh Aviator 2.3 is built for the toughest conditions, whilst being lightweight with outstanding protection.
PC Ray Archer

The Aviator reached a state of proficiency and became the helmet of choice for Cairoli’s teammates Jeffrey Herlings (every year since his Grand Prix debut in 2010) and Jorge Prado (since 2016) and other athletes in the MXGP field. Cairoli’s Aviator is the only replica in the collection and pretty much identical to the one he uses in his day-job.

“It’s the same that people can buy in the dealership but the fitting is very important, so I have a different interior,” he reveals. “It depends on the helmet model though: some years I’ve used the standard interior and other years I’ve needed some changes to suit me. The model changes a little bit every year but big changes come every few. I’ll be using new stuff a year before some of them make it to the production version.” 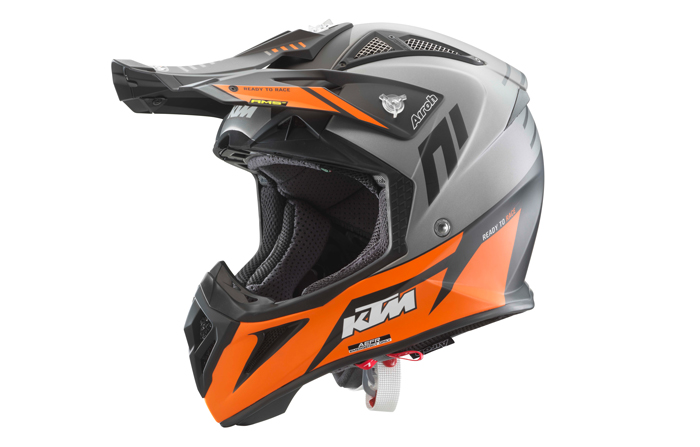 Airoh have working diligently to expand their street collection and reach the same acclaim they have achieved in off-road. The ST 501 is a sturdy and well-sculpted, value-for-money helmet (so much so that it holds a place in the 2020 KTM PowerWear catalog). Naturally, their most recognizable patron won’t be seen off-track in anything else. “I also use the street helmet,” Cairoli grins. “They arrived a bit late to this market because they were born from off-road but they have been in MotoGP for a few years and have had helmets for scooters for a good few years. I remember using one riding around Rome a long time ago!”

Check out the 2020 Airoh Aviator 2.3 KTM model as part of the new KTM PowerWear range by clicking HERE.

119 Responses to BUILT TO FLY: MAKING A CHAMPIONSHIP-WINNING HELMET