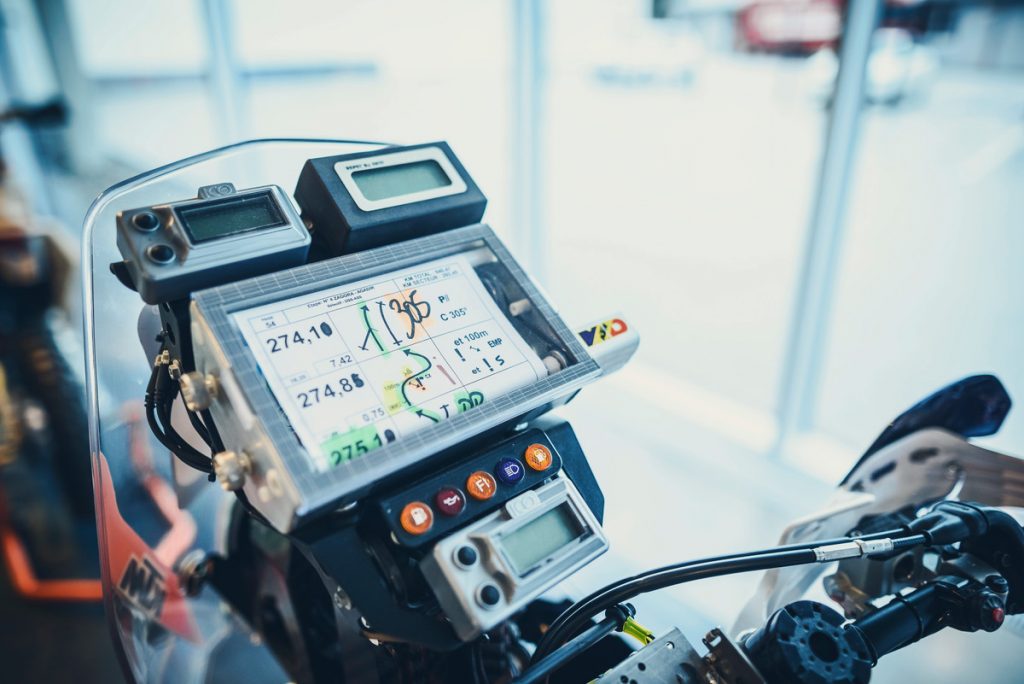 But how do riders actually find the right tracks and how do all these instruments on the navigation tower help them do that?

With Dakar 2017 underway, Red Bull KTM Rally Factory Racing Team Technical Manager Stefan Huber takes us through the basics of navigating by explaining the function of the various screens, boxes and switches on the KTM 450 RALLY machine. 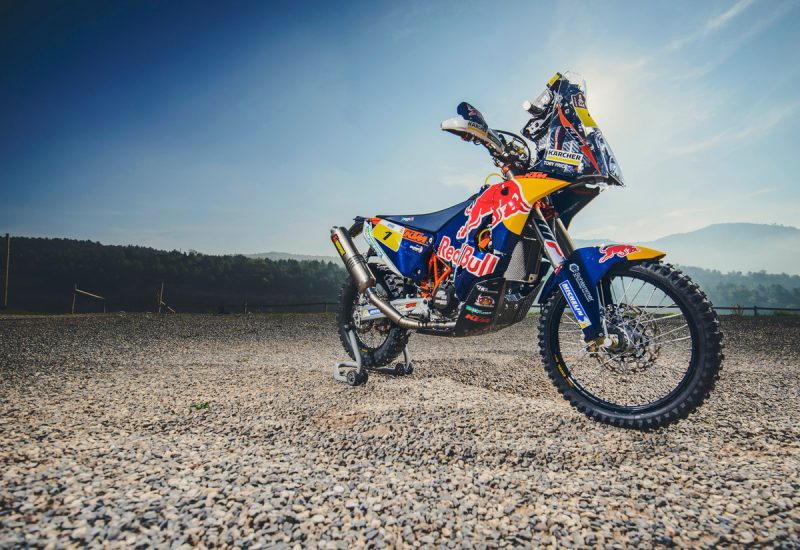 #1 – Roadbook
“The roadbook is by far the most vital piece of navigation equipment on a rally bike,” explains Huber. “It comes in the form of a long scroll of paper that offers specific directions at set distances along the course. We place it inside the aluminum holder and there’s a mini electric motor to roll the paper forward and backward if needed.”

Everything in the Dakar revolves around that scroll of paper and without it a rider’s chances of finishing a stage are seriously reduced. “The roadbook is well protected inside its case and it’s extremely important for it to be rolling freely so that our riders can read it,” adds Huber.

“In the extreme case the electric rolling mechanism stops functioning, riders can always roll the roadbook manually using the handles on the left. But that means they should be taking their hand off the bars, probably losing time in the process.” 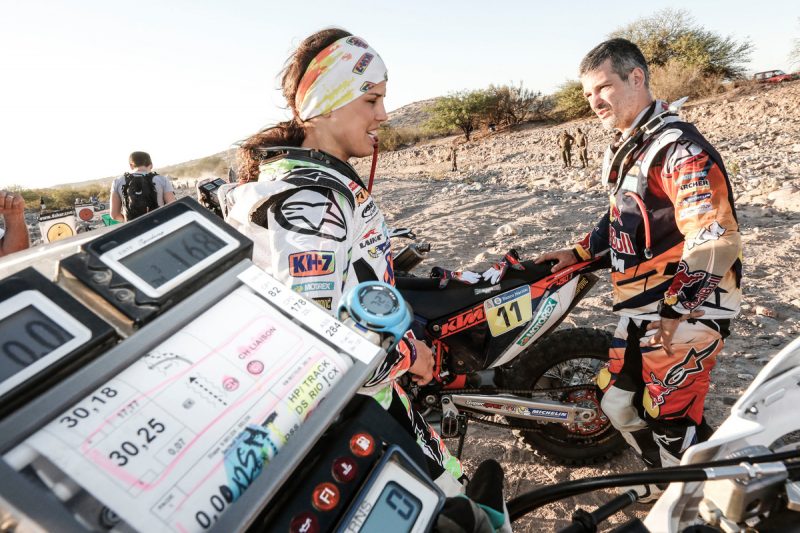 #2 – Trip Meter & Compass Heading
“Right above the roadbook holder we have two smaller instruments that have the same size and shape. The one on the left is the trip meter and the one on the right is the compass heading,” comments Stefan.

“Both these instruments are directly connected to the GPS tracking that’s provided by organization. The trip meter on the left gives accurate distance information in kilometers and the compass heading gives the right direction as a number value in degrees.”

#3 – Back-Up Trip Meter
“Right under the roadbook holder we have a third trip master, that’s mainly used as a back-up,” explains Stefan. “The main difference is that this third trip master is connected to the front wheel sensor instead of the GPS and that’s how it measures distance.”

“In the past race organizers created roadbooks based on distance from trip meters connected to the bike’s wheels, but it’s not the case any more. In the Dakar the most accurate way to measure your distance is always the trip meter that gets data from the GPS.” 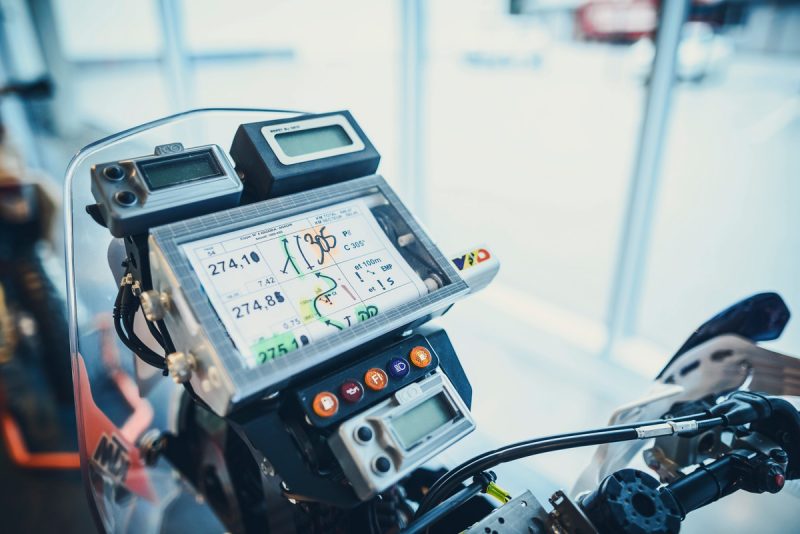 #4 – GPS
“Mounted exactly on top of the upper triple clamp and handlebars is the GPS, which is set by the organization. With navigation mostly done using the roadbook, the GPS is used to spot the waypoints during each stage.”

“When riders get close to a waypoint they get an arrow on the screen of their GPS. The arrow actually shows the correct direction to the waypoint. Once you’ve passed through this waypoint the arrow disappears and the GPS goes back to showing the compass.”

“There are different kinds of waypoints during a Dakar stage. For example, a safety waypoint will give you a 3 km radius for the arrow to appear on the GPS. To validate this waypoint riders need to ride within a 90 meters radius of it. Waypoints in more treacherous terrain might have a larger radius of 200 meters. Together with waypoints there are also manned checkpoints where riders need to stop to get a stamp on their timecard.” 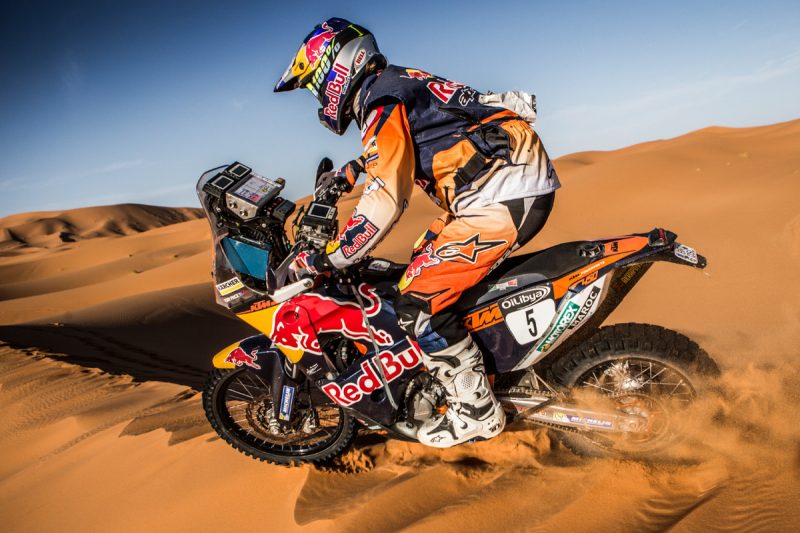 #5 – Handlebar Switches
“The main navigation switch block is positioned on the left of the handlebars. Starting with the toggle switch in the back, it operates using the rider’s left thumb. Its job is to control the movement of the roadbook paper inside the holder and it operates either back or forth.”

“From the front switch block, the two black switches control the GPS-connected trip meter moving the numbers up and down to keep the distance travelled correct. The other three green switches operate the third trip meter that’s connected to the front wheel.”

“An additional two-position black switch controls the flow of fuel coming from either the front or the rear tanks. We have two separate fuel pumps so riders can switch between them. Sometimes they prefer to empty the rear tanks first in order to get optimum weight balance.”

“The lights switch on the left comes from the EXC range. On the right side of the bars we have the control unit switch that riders use to change between the two pre-programmed mappings and the electric starter button.” 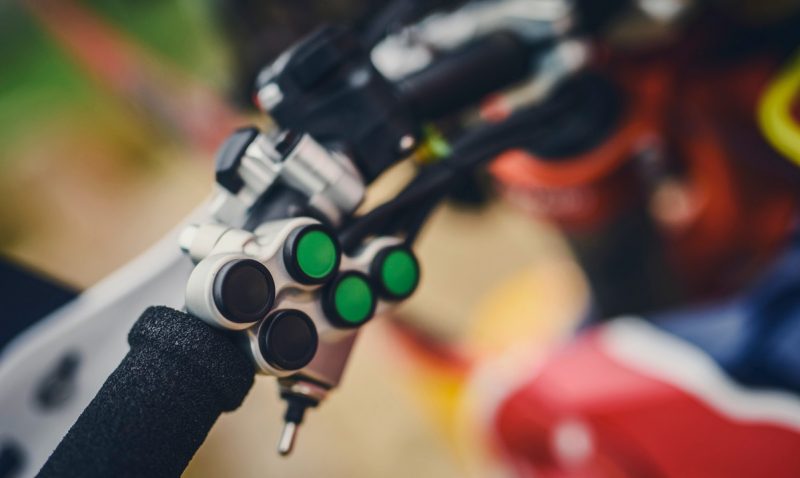 #6 –Safety Equipment
“Placed on the front left side of our carbon fiber navigation tower is the Iritrack safety tracker, which enables real-time monitoring and tracking of our riders by the Dakar organization. Riders can notify the rally organization of an emergency pushing the red button on the Iritrack.”

“If a rider stops unexpectedly, organization can contact to ask if they’re OK. If it takes the rider more than three minutes to respond, they can alert the emergency rescue team.” 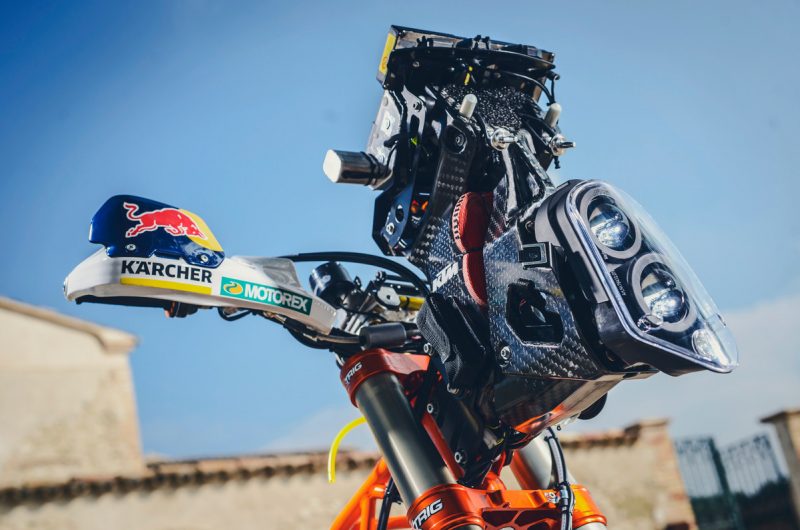 109 Responses to Dakar navigation: Tricks of the trade by rally guru Stefan Huber