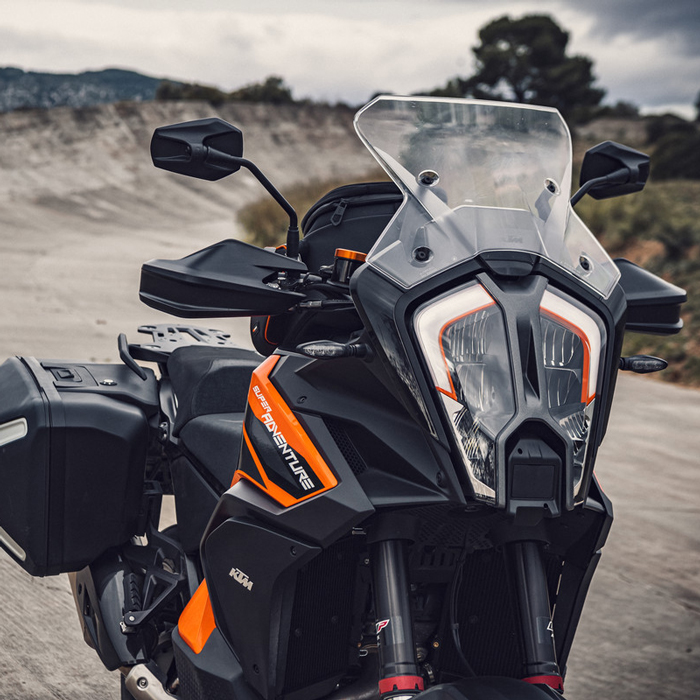 German know-how from Bosch has been integral to the electronics and innovations seen on KTM machinery for over a decade, and some of the sophistication on the new 2021 KTM 1290 SUPER ADVENTURE S means milestones are still being set. It was time to get someone from the firm to talk about their involvement with the orange…

KTM’s alliance with Bosch has helped fashion the latest wizardry of algorithms and hardware seen on more and more Austrian machinery and especially for flagship motorcycles like the KTM 1290 SUPER DUKE R & the 1290 SUPER ADVENTURE S. Whether it’s for direct contributions to safety systems or rider assistance tools, the synergy has put energy into the tech that the KTMs now carry. Think of Motorcycle Stability Control (MSC), Motorcycle Traction Control, Motor Slip regulation, Cornering ABS, the fresh generation of ride modes, WP Semi-Active suspension and the excellent ACC, the Adaptive Cruise Control fitted as standard on the KTM 1290 SUPER ADVENTURE S.

Bosch’s tagline of ‘Invented for Life’ could be tweaked to ‘Invented for living’ if applied to the sensations of motorcycling and this is where KTM’s Bosch technician and KTM 1290 SUPER ADVENTURE S Project leader, Davide Olerni – a keen motorcyclist himself – comes into play. We grabbed some time with the engineer at the launch of the bike through the pouring rain on the island of Fuerteventura. The electronics were getting a thorough testing in the climate both for their effectiveness and their resistance.

We’d already heard from Dominik Bodner, the Chief Engineer of LC8 R&D, when he said “Bosch for us was the most competent partner for such a new project, and for years we have a very tight collaboration to get everything right. There was a lot of testing and approval steps together”, and we knew of the origins of the union for the KTM ADVENTURE bikes in particular with the ground-breaking MSC emerging on the 2014 models.

Olerni has been with Bosch for 15 years and between bases in both Italy and Germany. “I started on the engineering side and initially with cars,” he explains. “In the last three years I moved to the two wheels and Powersport department. I’m a rider myself, so I was happy to have this chance. As a supplier we deal with more customers. We have a dedicated team for each one and I work only for KTM. The relationship we have built is awesome and there is a big difference to the passenger car world. Motorbikes and powersports are much more intimate with very passionate people; they want to do a good job for a product that will really serve other people in the end. The relationship is day-to-day.”

How does the working relationship with KTM function exactly?

“I used to visit the factory a lot but that changed in the bizarre year that was 2020. We also have one of our team based full-time in Mattighofen; installed there to work on the radar topics and new technology. KTM are better served by having someone there.”

How many people do Bosch have in their two-wheel division?

“Difficult to say exactly. I don’t’ know a number but it is beyond hundreds. We have people for the development of systems, hardware development and hardware applications and software. It is spread across Japan, India and Germany. It’s a pretty big team.”

“It has become more of a priority and the fact that the two-wheel and powersport department was set-up just over five years ago is an indication of how much Bosch are looking at this market. Bosch has always been an innovation leader for assistance systems and electronics: this was always our ‘bread-and-butter’. Maybe it wasn’t so focussed on motorcycles before, but our work derived from passenger cars and has grown a lot in five years. Traction control is a good example and how it developed to what it is today.”

Are bikes more limited for development or do they offer more challenge and variety compared to a car?

“You might think carrying a system from a car to a bike would be pretty easy in terms of the basics but it’s not always like that for obvious reasons. For instance, in the Adaptive Cruise Control and the RADAR sensor we implemented for the KTM 1290 SUPER ADVENTURE S we had more of a challenge because of the lean, and you don’t have things like the angle of the steering wheel. You have to rely on the measurement from the 6-axis unit which is also one of the main innovations on the KTM 1290 SUPER ADVENTURE S. Overall the motorcycle world has some significant benefits and challenges.”

The 6D lean angle sensor was first seen on the KTM 1290 SUPER DUKE R. Are we talking about very advanced kit?

“The 6D lean angle sensor is the highest level of technology for an inertia measurement unit we have today. With the KTM 1290 SUPER DUKE R we were really able to take advantage of the additional information we gained for the KTM 1290 SUPER ADVENTURE S ACC but also the traction control, which takes advantage of more detailed data and gave us a big benefit for this next version of the system. The end user might not necessarily have more options to choose but you can feel and appreciate that the controls are much better and smoother on the KTM 1290 SUPER ADVENTURE S.”

How do you think people perceive your work at Bosch? Some might really appreciate all the safety and user-friendly systems. Others might be turned off by all the electronic assistance…

“First of all, we are all motorcycle riders in our division and personally – perhaps I can also speak for the other guys – we always think about safety first. It’s a big priority…while also trying to keep the fun spirit of the bike. Assist systems are important, and it’s important we have them. Many people might not agree. Some change their mind after using them or trying them for the first time, luckily, and people who don’t want them are able to switch them off or tone them down. I respect everyone’s opinion. Even the ABS and Cornering ABS was met with a lot of scepticism in the beginning and people ended up changing their mind.”

What about the future? Will it be about making existing systems better and cheaper or something totally new?

“I guess both. We think the innovative systems we see on the KTM 1290 SUPER ADVENTURE S will gain more acceptance and they will start to be present on more bikes, maybe not only the high-end models. At the same time, it is important that we find new ways to support the riders actively or passively. There is much more still to go.”

Check out a series of videos on the KTM YouTube channel to discover the Features & Benefits that make the KTM 1290 SUDER ADVENTURE S the ultimate high-performance Adventure bike.

If you want to stay up to speed with the latest KTM news, subscribe to the monthly KTM NEWSLETTER.