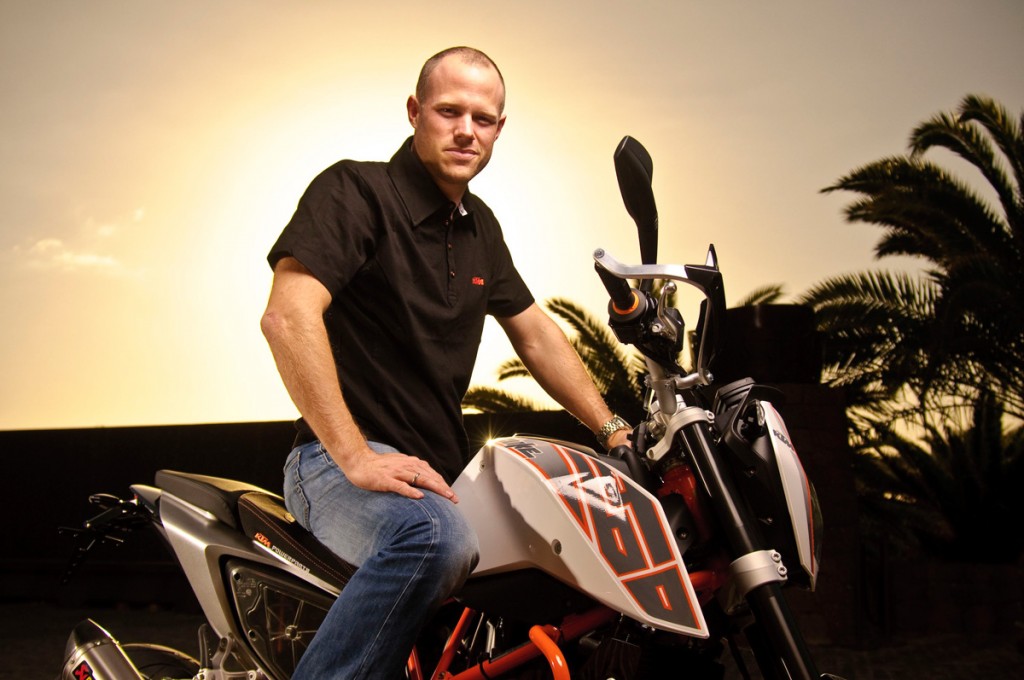 Father of the Duke

With the 390 Duke rolling out onto roads in Austria this week for the official launch we grabbed ten minutes with the extremely busy Philipp Habsburg – head of R&D at the factory – to ask him about the growth of the Duke line-up, from off-road beginnings to the most comprehensive street motorcycle model range available today. 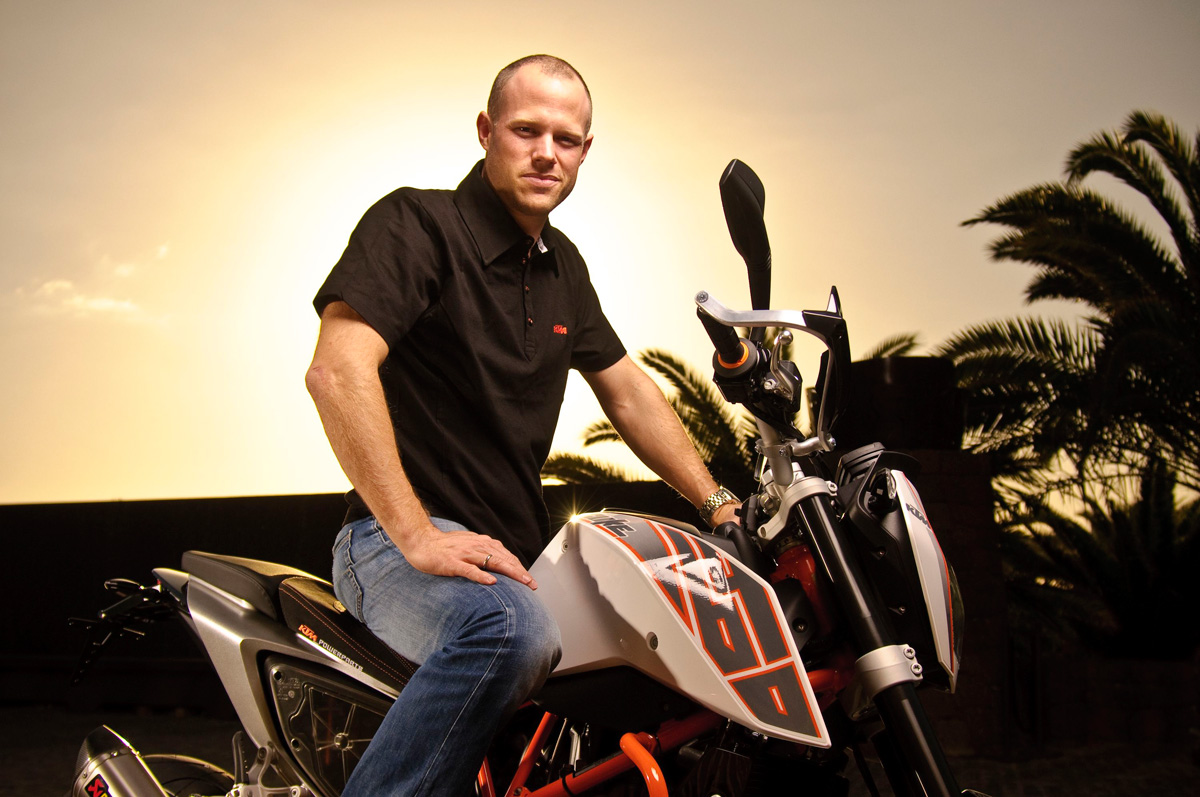 Has the journey of the Duke been an interesting one?
It has because we started in 1994 with the first Duke that was born from enduro. I came to KTM in 1998 and my first project was the next phase of the Duke where we tried to develop the concept and take it more towards the street. A few years ago, in 2008, we introduced the ‘Duke Three’, which was based on the Supermoto 690 that had arrived the previous year. That 690 was at the same competitive level of the Duke Two but it was the starting point for development for a completely new Duke and that came along in 2012, being the Duke Four – as we call it internally. The ‘Four’ was a big step because it was a model not related to any of our current bikes. It was a totally new product with new ergonomics and basically everything fresh.
Parallel to that we also introduced the 990 Super Duke in 2005 and the treatment of that bike was the same as the 690 in 2012; in other words a big progression. It was a Super Duke unlike anything we had before. Development of the range of smaller Dukes started in 2008 and the first signs of this came in 2011 with the 125. Eventually we formed five models for the entire Duke line and there are still some more to come and we’ll go from 125 right up to 1290cc. In my point of view I think that is the most complete range of motorcycles in the world. The 125 can suit a sixteen year old and a person can progress with the bikes right up to the 1290.

Could you imagine in 1998 that the Duke would eventually spawn five (and more) models?
No! In 1998 when I started in KTM we were selling around 25,000 units a year and now it is hitting 100,000. For sure it was not imaginable to have four times more than we were handling at that time. However we looked at that goal, and in fifteen years we were able to bounce back from the effects of the crisis and hit the number. We are back on track with quantity and we are really proud of that.

Why the big gap between the Duke Two and Three?
Yes, it was quite long, nine years, and the main reason was that the R&D capacity of the company in the early part of that phase was not that high. After the Duke Two we put a lot of pressure on the two cylinder bikes. In 2003 we brought a 950 Adventure, two years later the Super Duke and then the Supermoto and it meant an increase in the role and potential of the R&D dept. When I started in 1998 I was the 39th R&D employee and now we have 250 people working there. As you can imagine there are a lot of things to do to organise a growing group like that over fourteen years. As soon as we had the possibility to push more then we started with the Supermoto and then onto the Duke once the new concept was in place.

Did you have freedom to do what you wanted?
On the Duke Three we didn’t because the budget was limited and this explains why there were similarities from the Two to the Three and essence of a Supermoto bike. Until 2011 we sold around 1200-1800 units a year for the Duke. From 2012 it has increased to more than 5000 with the new type.

The economy and changes in the industry mean that naked bikes are now even more popular. That must be nice for you to see that segment is healthy…
For sure and that is the key to our success because in KTM R&D there are people with that passion and enthusiasm. In the end people are just trying to develop ‘their own’ motorcycle and maybe that’s why the bikes seem to have soul while others do not.

As there have been various concepts like the Freeride and the Adventure the variety of concepts must have kept you very busy over the last five years…
I’ve been busy since 1998 and since I arrived! I said we have five Duke models but actually it is five and a half because we also have the Duke R, which is more for the initiated Duke fan whereas something like the 690 or the 390 can work for anybody. The R is more like a bike without any compromises.

Which one would you personally chose?
Next year I’ll go for the 1290 Super Duke! Inside KTM we always have discussions like ‘why should I buy a 990 Super Duke when there is also a 990 Supermoto?’ because technically there are similarities. The big difference is just in riding styles; with the Supermoto you have your foot down whereas on the Superduke you have your knee down.

If we talk about the Duke specifically then a KTM fan will say ‘I know what I want’, but a general motorcyclist might be bewildered by choice between the models…
Each bike has its role of course but for me personally, besides the displacement and the power factor, there is also the money. We now have a range where we can start at €3990 for a 125 Duke right up to something like €15,000 for a 1290. From my point of view this is also a very important part of the decision-making process for the customer. If you have the right age and licence the 125 fills the hole perfectly. The 200 provides a cheap, practical commuting tool. The 390 – in our eyes – is orientated to a slightly new market of people that might be fed-up with traffic and the urban sprawl but do not want to pay lots of money for a motorcycle. The 390 R will be for €4990 which I think is very competitive for 140 kilos and 44bhp and is similar to what many people who are already bikers will have experienced in their early days. When I was eighteen I used to ride a Suzuki GS500 that weighed over 230 kilos and had 42 bhp! The 390 is a great package and really fun to ride. The 690 is then the next step for those with a budget of around 7000 and want to enjoy the strongest single cylinder bike engine in the world. The 1290 is for the specialists.

Where can the Super Duke go in the future?
Trust me, we have a lot of ideas for the future…

That’s not an answer…we need more…
Well, like we’ve seen with the new Adventure there are two different versions and products for different customers. The Super Duke will have a new model and we’d also like to have some twin cylinder variations. In the coming years there will be more to come from the Super Duke and Adventure concepts with some other features for other customers. We still have a lot of work ahead. We mustn’t forget that we also have the single cylinder family, the off-road family, the Freeride family…there is plenty to do.