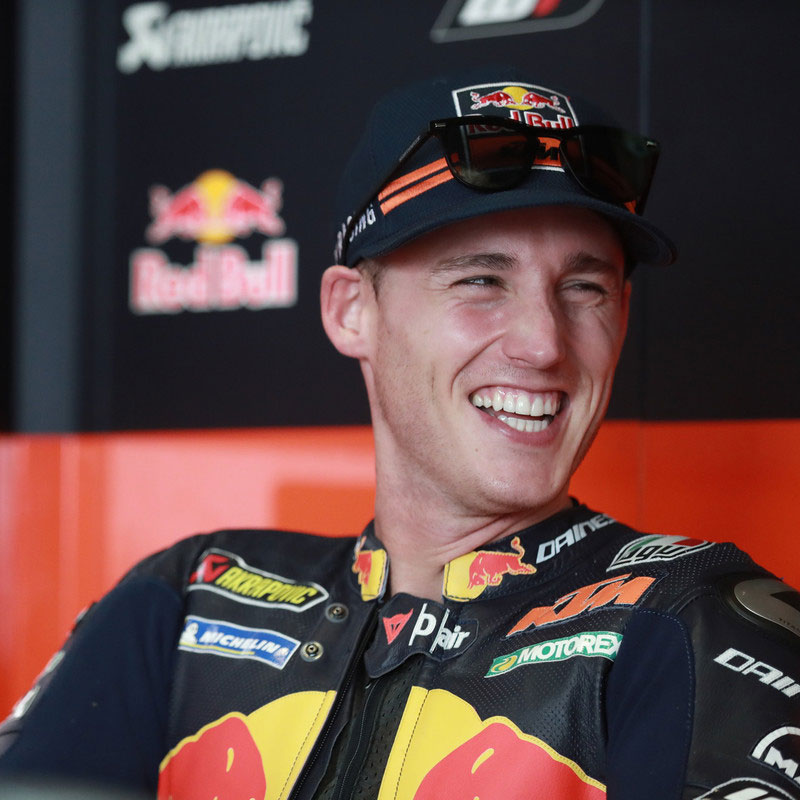 Posted in Heroes, Interview of the month, Lifestyle, People, Racing

In the immediate hive of Sunday’s activity after a European MotoGP™ it can be easy to find Pol Espargaró sitting in the Red Bull Holzhaus Energy Station eating a bikini. The 28-year-old is not chewing on beach clothing but a toasted ham and cheese sandwich (so called in Catalonia). It’s almost a ritual. A small ‘reward’ for the sandwich-crazy lead rider of the Red Bull KTM Factory Racing team that is deep into its third term at the pinnacle of motorcycle racing. 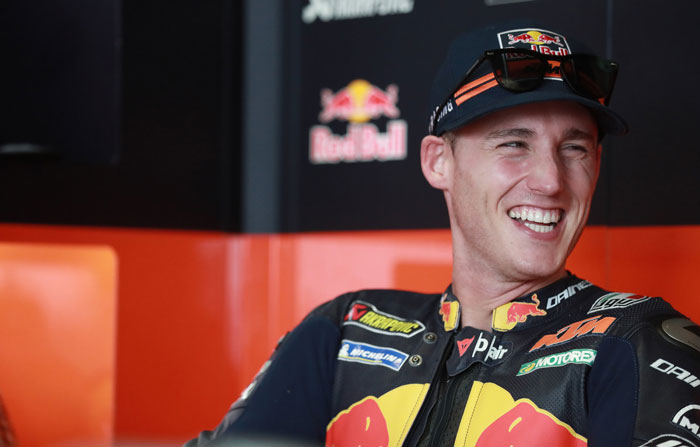 The Holzhaus is typically packed with KTM’s team members and guests throughout a Grand Prix weekend but riders tend to eat at unusual hours and often with a plate of food different to everybody else. It’s hardly surprising. They need to be at a mental and physical peak of performance and alertness for the mere minutes they are on track and need to drill machinery to the maximum.

Now a six-year veteran of the premier class after jumping into MotoGP™ as a Moto2™ World Champion in 2013, Espargaró is at the forefront of KTM’s progress in the sport and has already racked up seven top ten results in 2019. When the Spaniard hopped on the RC16 for the first race at Qatar in 2017 he was 2.5 second adrift of the pack. At Misano for round thirteen of the current campaign Pol was second fastest on the MotoGP™ start grid.

Like KTM, Pol is hungry. On this occasion, we interrupt his sandwich time to talk about a facet of preparation that many fans might not necessarily know about. 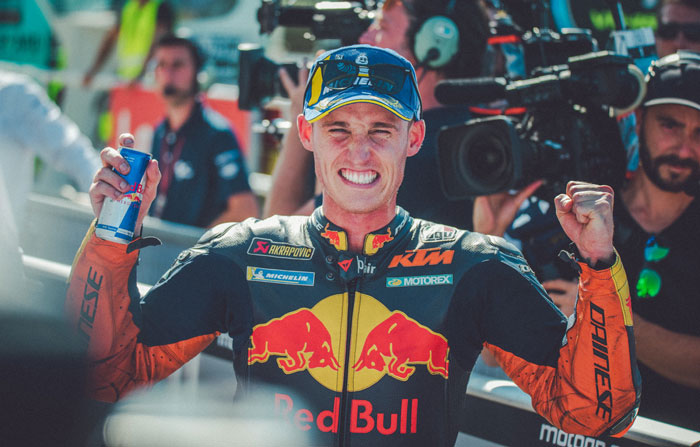 It seems there is much more knowledge and awareness in professional sport about diet and intolerances now. Is it something you think about or wanted to learn about?
I think it is important to know your body as much as you can. We have a lot of good doctors to hand and with blood tests and other examinations you can know a lot about what you should eat and what is good for you and what isn’t. You can have an idea yourself just through feeling but the science helps. I think many people can have an athlete’s diet quite easily now but it helps to have that analysis which focuses even more on what will help you on the bike. Our sport, or the race time, is just forty minutes so you don’t need to be eating, eating and eating. The energy we spend is very quick. It means we don’t really need things like supplements or an ultra-strict program. Although we have routines of course. I eat at least two hours before getting on the bike. When the race is at 2:00 p.m. then that’s OK but practice on Saturday is 1:30 p.m. and it means a weird early lunch!

In your case are there any intolerances or problems?
Not really. I tolerate bread and gluten very well so I can eat a lot of it during the day. But I still prefer light food and healthy stuff without sauces. Very plain. It’s not the nicest or most fun but it works. 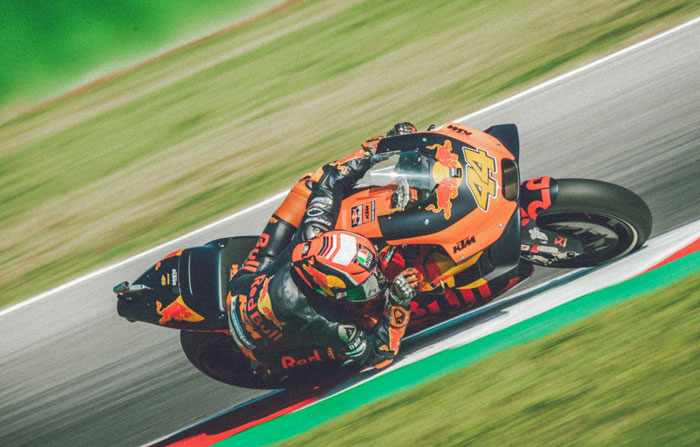 How does it work at home?
We have a machine that makes lots of different foods and it is very simple and easy to make healthy stuff. As well as good desserts! In the winter I’m much easier with what I eat. We have a Mediterranean diet, which is pretty clean. I don’t like fast food and I don’t eat it. So in the winter I am eating what I want rather than what I should and I think this is a good way to try to forget a little of the discipline of what we do. To enjoy life a little. Then, about a month before the season, I will start to get super-strict to get back to the weight I need to be.

What does ‘super strict’ mean?
Simple stuff. No sauces. Pure food as well. So if I’m eating an omelette then the eggs will be ecologic. A lot of fish. No heavy meats. I love pasta and there are hundreds of different kinds. I bake my own bread at home and love doing that. I’ve made versions with cereals, different grains and ingredients.

When you were fifteen and first came to the world championship did you really have to learn about this stuff or were you already eating well and benefiting from it?
When I started on the 125 I went to live alone. I think I was seventeen when that first happened, so you need to learn to cook for yourself pretty quickly. At that time I was not taking much care of my diet. Actually I don’t think that happened until I got to a good level of Moto2™ and into MotoGP™! I wasn’t being super-careful or asking questions about what I was eating and why and how much I was eating. [smiles] I remember back when I was riding 125s that I was eating a lot of frozen food. I would go to one shop in particular and fill the trolley! In my home the fridge was almost empty and the freezer was completely full! The microwave was used a lot! The food was not super-bad but it wasn’t great either. 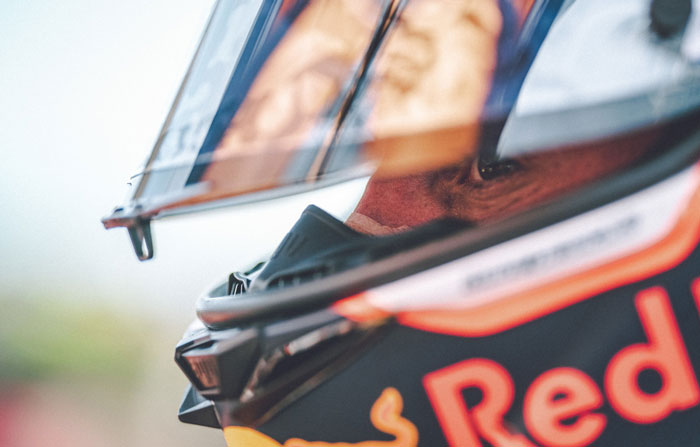 Your brother [Aleix] owns a sushi restaurant. How was he with food and as a reference for you?
Aleix was always better than me. Right now we eat differently because we have different bodies and he loves cycling. He needs to be very light, so he eats a lot of vegetables. Aleix is very focussed on his diet and he gains weight quicker than I do. I have a bit more muscle than him. He’s always been careful. I think having a restaurant is a risky business but he loves the Sushi and he did me a big favour because he opened that place and the food is really good. That could finish soon for me though because in January I plan to be a vegetarian. I am already talking with nutritionists and diet specialists as well as trying things.

Why?
I’m kinda against how we are treating animals. I’m not eating so much meat now but I still think it will be tricky because I’m eating a lot of fish and lots of chicken. The hardest part will be sticking to it when we are flying around the globe and in airports and when you might not have vegetarian food to hand. But, a lot of things are difficult in this world, so I’m going to try at least.

Was there a moment when you were struggling for stamina or you were really curious about what you were eating and how it could give more energy?
Yes, and it was when I came to KTM. It was a new project and the bike was very physical to ride so I knew I needed to be as fit as possible. Every single detail with the body – eating, training, supplements – had to be really accurate. I couldn’t – and wouldn’t – give up anything in the races because of a physical reason. I trained so much in the beginning and now even more – much more than when I first came into MotoGP™. Every year I discover a little bit more and it’s actually quite fun to find that stuff out: you get motivated by it. The vegetarian plan is motivation and I like that. 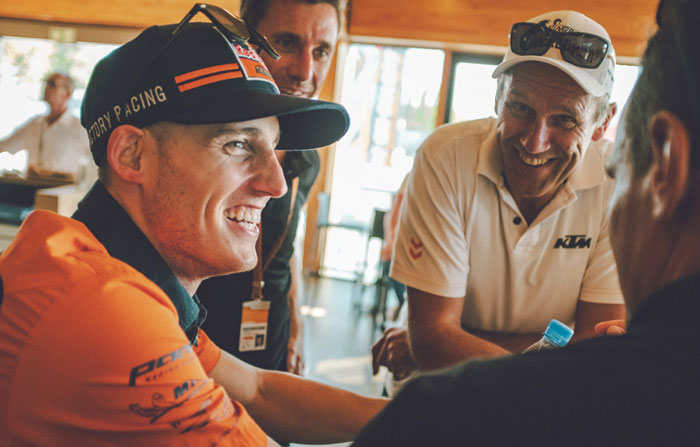 You have the motorhome at the track but then you have the Energy Station. Do you always eat here?
I have breakfast in the motorhome and can have lunch here or there because it’s usually just white rice and chicken breast. I’m also here in the evenings because the food is unbelievable.

OK, so what’s the MotoGP™ race day eating routine…?
I don’t eat so much when I wake up because we are out on the bike just after 9:30 a.m. for warm-up. I’d have to get up much earlier than I do if I wanted to eat well. I choose to rest instead! Warm-up is not so long anyway. After that I’ll have a couple of pieces of bread with some oil and turkey – always the same! It’s not much fun. At midday I’ll have a small amount of rice and chicken. On Saturday, if we are doing a long FP4, then I’ll have a couple of supplements like energy gels or bars and also some caffeine. 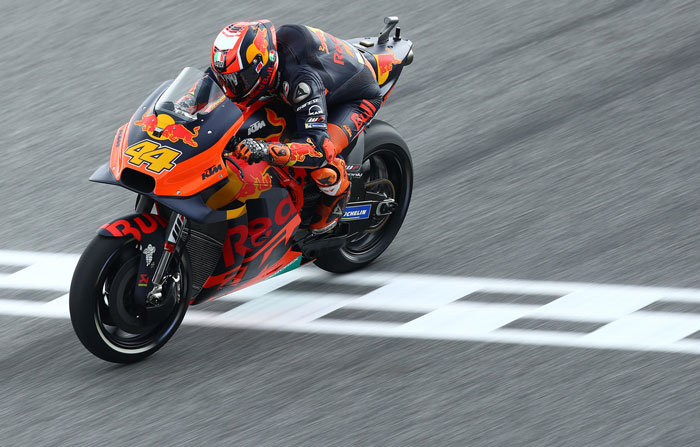 What about hydration? That must be tricky in places like Thailand and Malaysia especially.
I normally drink a lot but on race day – right up until I get ready – I drink and drink water until I go to the toilet and it is like the water is just passing through! I do this even in cold conditions because I think is super-important to be hydrated, even mentally. Forty minutes before it is time to get ready then I stop drinking otherwise I would be running off the grid. You see riders walking off sometimes and I think it is connected with nerves and your body wanting to expulse that energy. So Sunday morning I’m in the toilet quite a lot! I sometimes use a CamelBak during the race for something extra.

What is your dietary weakness?
Oh! Desserts, and it feels like it gets harder to resist! Sometimes in the winter I do oven-cooked bananas with sugar on the top. Unbelievable. As a kid I didn’t like dessert – I know! – but recently Chocolate Coulant is amazing and Nutella is hard to resist: I can eat that now after a big strong effort training during the winter and when I need some sugar. I think I love it so much because I keep away from it as much as I can most of the time. 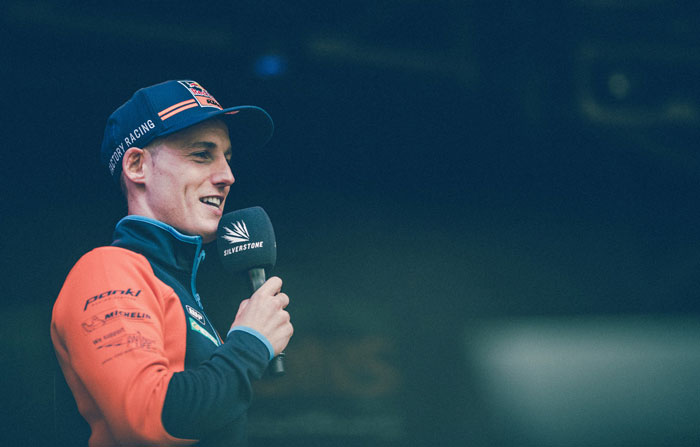 What’s a typical ‘reward’ dinner then?
Sundays after the race I don’t care! If the result is good then I can eat an amazing quantity! Most of the weekend I’m not eating much so Sunday can be crazy and I usually finish a big plate. On the other hand, if the results are not going well then I feel like my stomach is closed and I won’t want to eat much for a day or two. It’s strange how the body works.

Lastly: favourite Catalan dish?
Ah! ‘Pa amb tomaquet I embotit’ (toasted bread rubbed with fresh tomato and oil and a small piece of cured meat or ham). My parents were working when we were kids – me, my brother and sister – and if my Mum was stressed or tired at the end of the day then she’d just prepare this plate and I loved it. Bread with some ‘fuet’. It’s not so healthy, and I know if I’m going to be a vegetarian then it will be over with but I will make the effort to be veggie. The bread stays though: there is no way I could get rid of the bread!