When it comes to Moto3, KTM uses a steel tube chassis, produced by Kalex, to insert the powerful 250cc engine. We visited the light metal specialists, located in Augsburg, and checked what makes the aluminium chassis and engine such a brilliant combination. 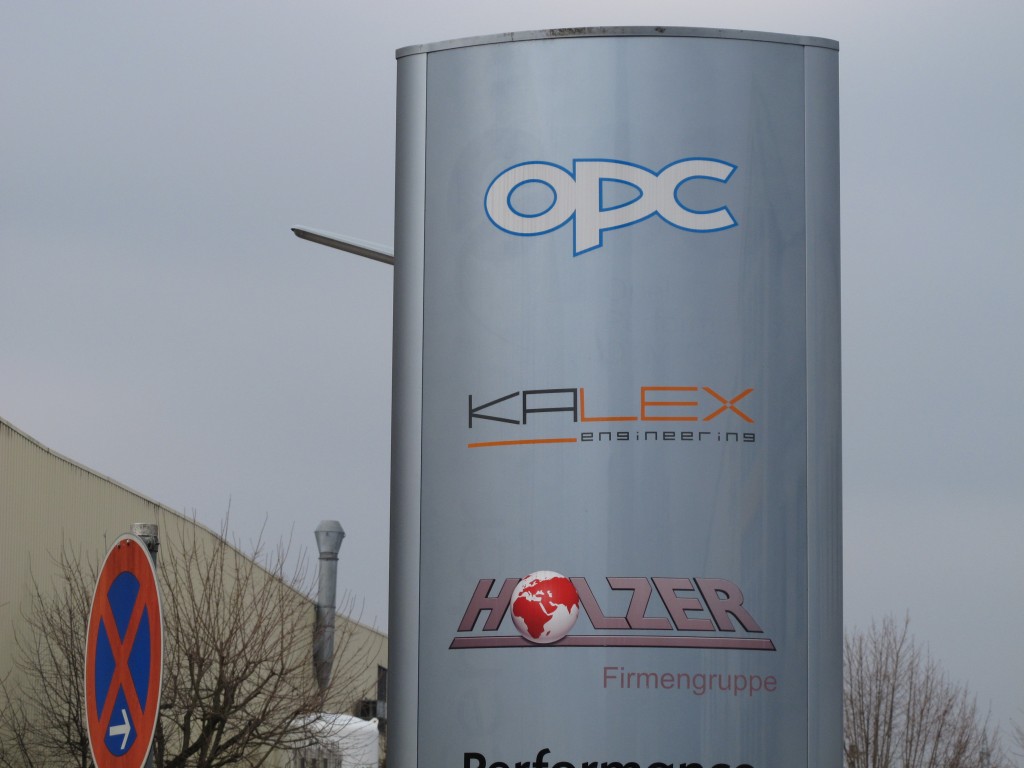 In 2012, when KTM decided to enter the Moto3 category, a steel tube chassis was developed around the 250cc four stroke single cylinder engine. At the same time KTM made an agreement with the German company Kalex Engineering regarding the production of more chassis made of aluminium. By doing so extended capacities were ensured and additionally initiated an internal competition in respect of concept and material. 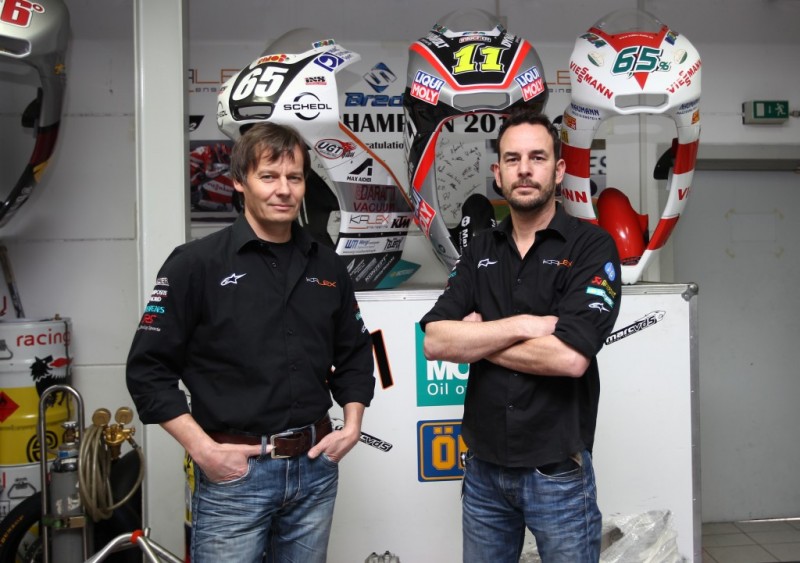 Kalex Engineering was brought into being by Alex Baumgärtel and Klaus Hirsekorn. The engineer duo from Bobingen, a small town near Augsburg, originally dealt with automotive race engineering, while riding  motorcycles only in their free time and for fun. Inspiration struck on the way back from Sachsenring Trackday: “We should build our own race track bike, better than the entire series bikes.” That´s how the first self-made construction came into being: the Kalex AV1, a 1000cc twin inserted into a self-made steel frame. In 2010, when the Moto2 category came into being, Baumgärtel and Hirsekorn decided to seize the chance and build a high-quality prototype chassis made of elaborated milled aluminium for the four-cylinder standard engine. Besides exact construction, precise assembly and process reliable production it was a decisive advantage that both could draw on state-of-the-art processing machines of their employer, the pretty well-known Holzer-Gruppe. 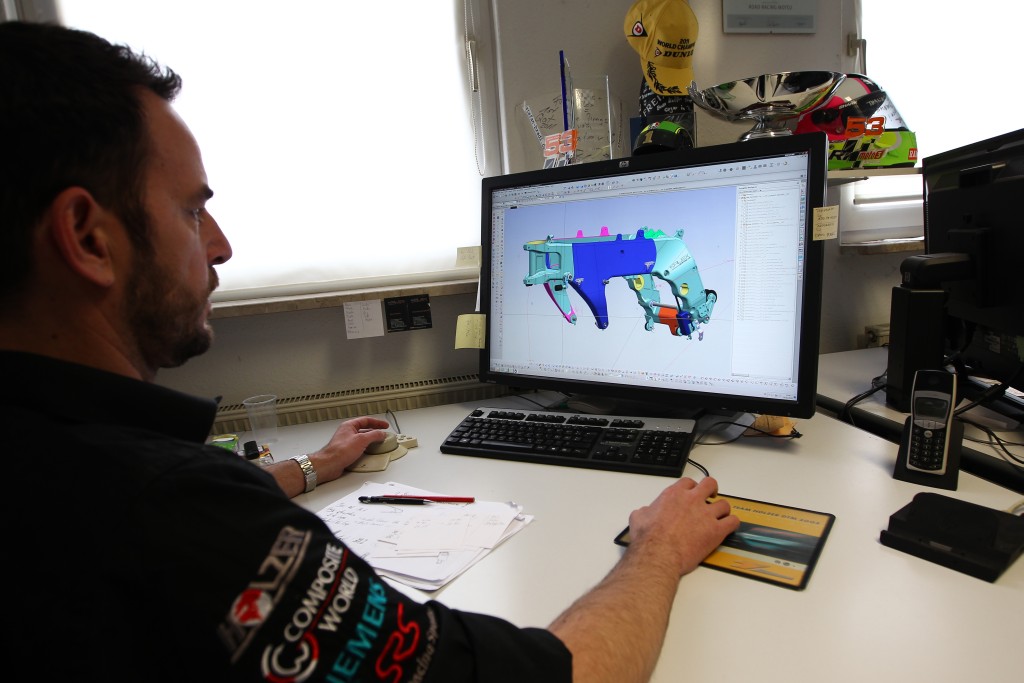 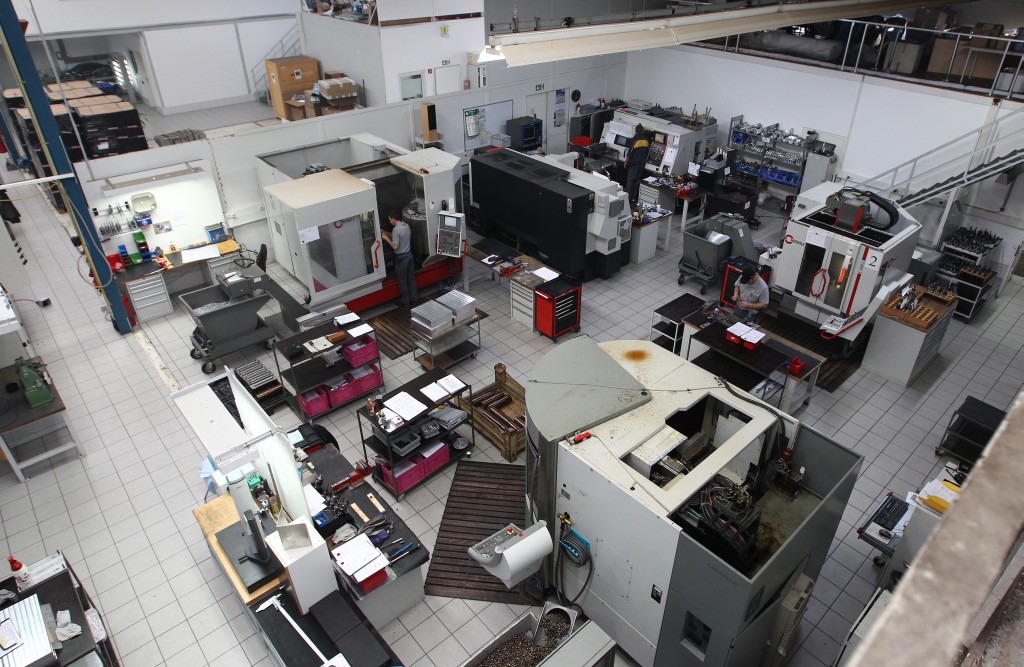 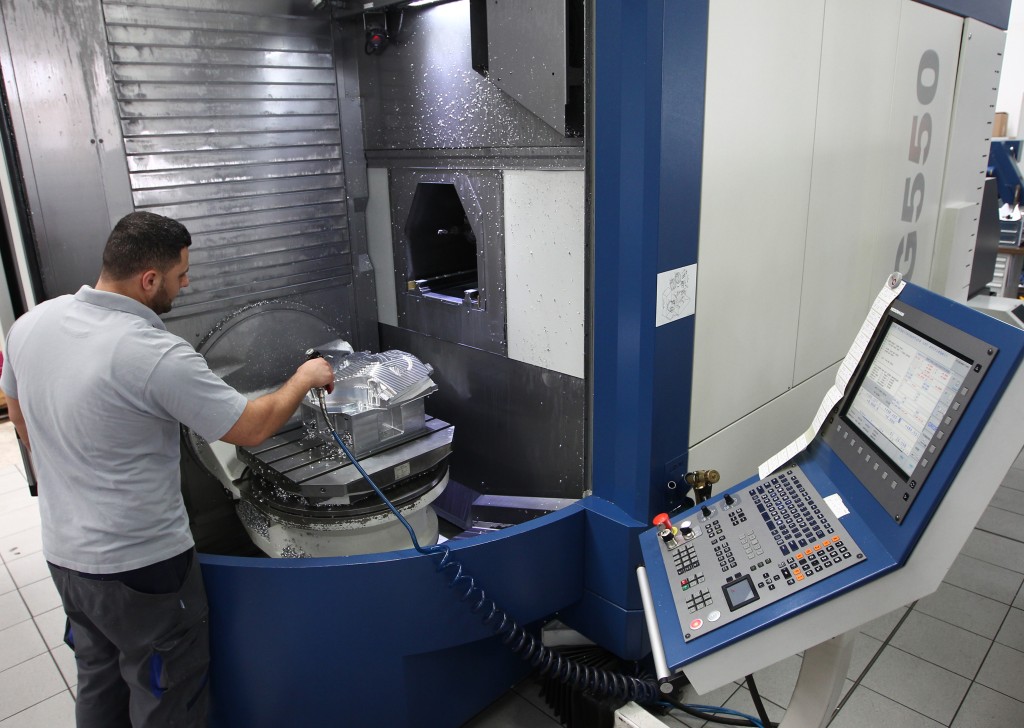 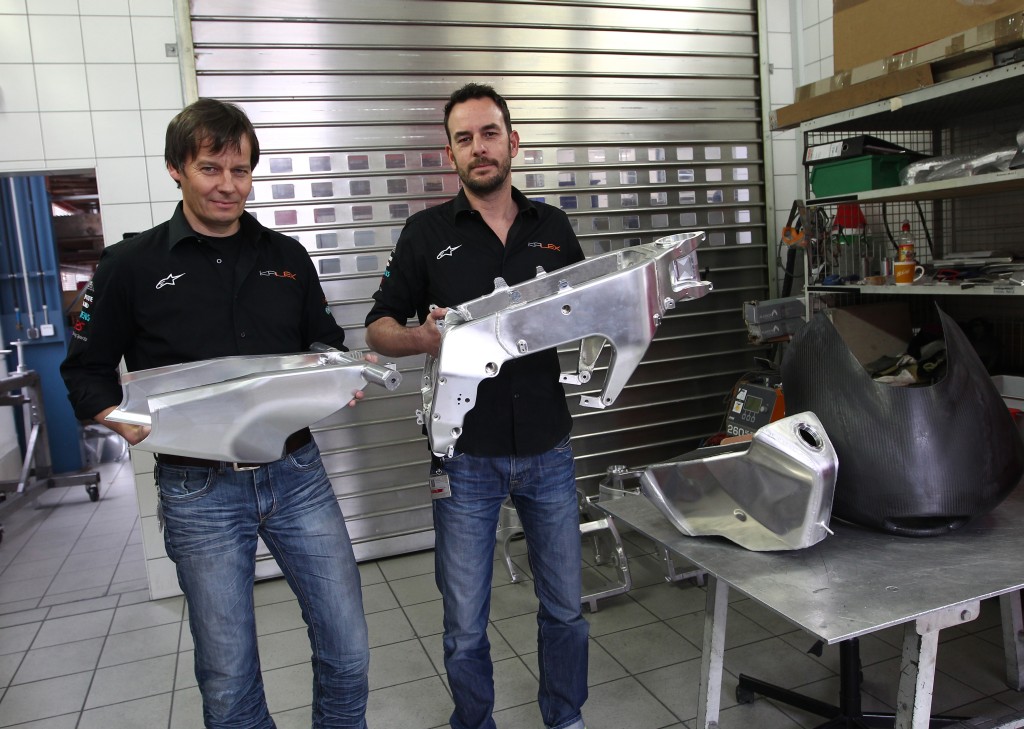 With its construction the Kalex duo hit the nail on the head: The technically challenging chassis construction aces with indulgent ride-ability and fast lap times. First customer was the team of Alfonso “Sito” Pons, afterwards the number of customer teams increased every year. In 2011 Stefan Bradl captured the World Championship title riding a Kalex bike and Pol Espargaró repeated this success in 2013. Finally, the frosting on the cake was the manufacturer´s title in the Moto2 class.

Also the Moto3 chassis of the Kalex-KTM is made of milled aluminium. All parts of the frame and swing arm are thoroughly welded. At all work steps the focus is on maximum precision. To settle possible delays, the final bore and work steps on the steering head bearing and swing arm mount, are made at the finally welded construction. A special feature is the tank, which is partly placed beyond the seat, which contributes to the fact that the priority position changes only slightly at a decreasing amount of petrol during the race.

Basically it´s possible to purchase a final and complete Moto3 bike, but in most cases Kalex sales a frame kit, including swing arm, tank, fairing and sit bones. The teams contribute fork, fork leg, brakes, tyres and exhaust system of their choice. KTM sends the Moto3 engines to the GP promoter Dorna, which then raffles off the engines to the respective teams bounded by contract. This procedure applies to all participating motorcycle manufacturers and ensures equal opportunities regarding the engine.

A Kalex Moto3 frame weighs 6 kilos and the swing arm 3.5 kilos. In Moto3 there is no need for spare frames. The motorcycles are not only build sturdily, with 88 kilos fully fuelled they are comparatively light and in case of a crash via the front wheel they are sliding harmlessly over the ground. Evil highsiders, when the bike swirls through the air and is affected by a hard impact on the ground, are extremely rare. In 2013 none of the Kalex riders in the Moto3 category needed a spare frame. In the heavier Moto2 category, every Kalex rider statistically used 1,6 frames.

In 2013 none of the Kalex riders in the Moto3 category needed a spare frame. In the heavier Moto2 category, every Kalex rider statistically used 1,6 frames. 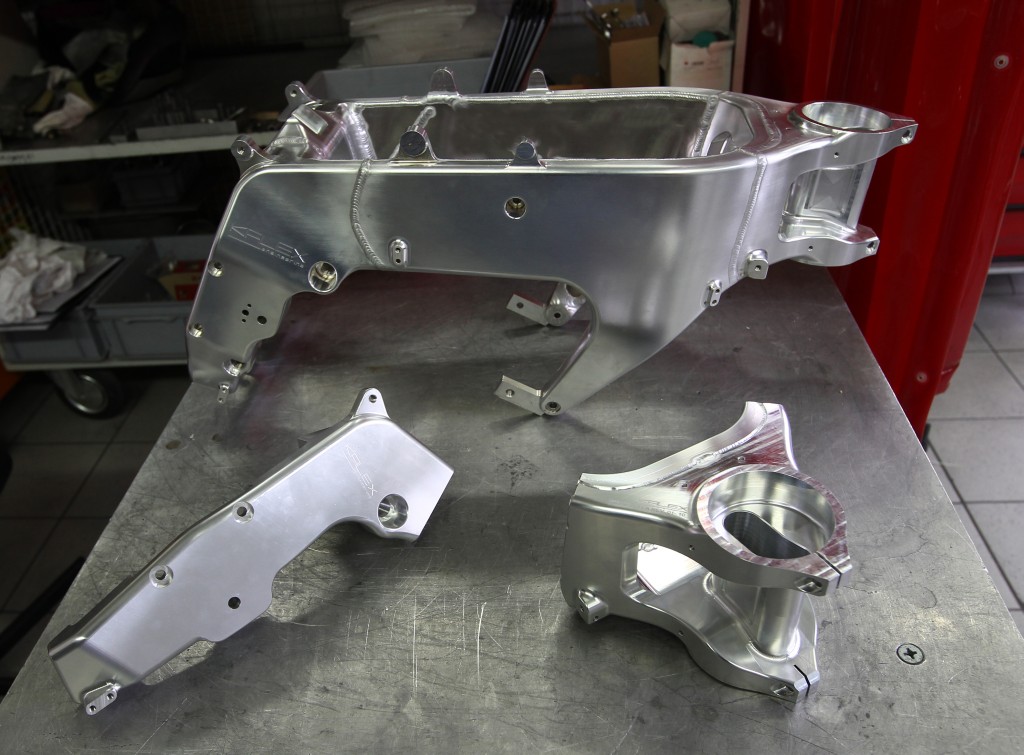 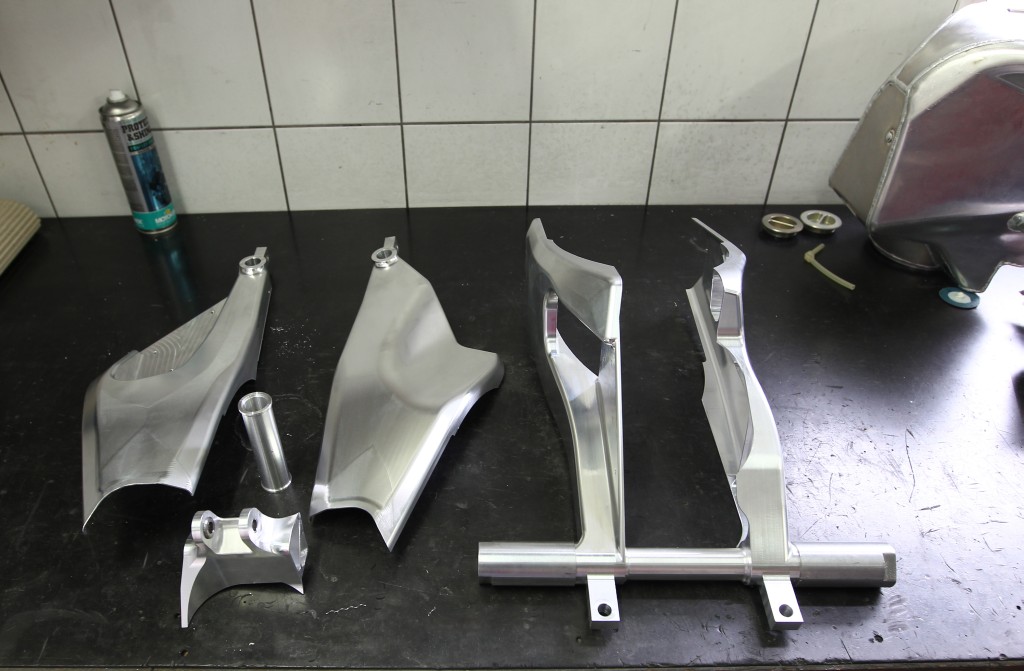 Of course both Kalex engineers are passionate bikers. Alex Baumgärtel does not only own a Voxan Café Racer, he also bought a KTM Duke II and Klaus Hirsekorn enjoys the agility of a KTM 990 SMR. In the meantime the number of employees increased to 5 people. Three of them, the company founders and the engineer Michael There are on-site at all Grand Prix races, to offer the best possible support to the customer teams.

In 2014, fourteen riders of the Moto2 starting grid rely on the German chassis. I addition seven riders of the Moto3 category will race on a Kalex-KTM. In the last two years, Kalex-KTM riders gained three GP victories and overall thirteen podium spots in the Moto3 class. After a tour through the company and the impressive facility with numerous automatic CNC processing machines, Kalex engineer Alex Baumgärtel answered some questions: 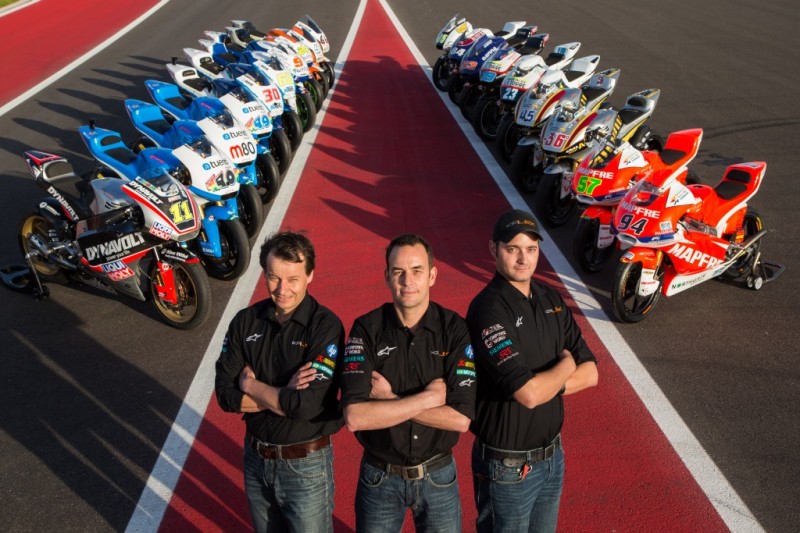 For more than two years Kalex cooperates with KTM, but at the same time the two companies are competitors during the races. How does the collaboration work?
“Pretty good. The flow of information and communication proceeds without any problems and we get along quite well. KTM provides me with the CAD files and engine mounting dimensions, additionally with all necessary information regarding intake air and cooling requirements. Everything you need to build a chassis. Right at the start we tested our airbox and exhaust gas system in Mattighofen for verification. Only on the race track, KTM factory and Kalex riders race against each other.”

Are there changes on this year´s Kalex Moto3 frame in comparison to 2013?
“Yes, we completely reworked the engine position, tank, cooler, fairing, tail as well as aerodynamics and seating position. The amendments are far more extensive than on the Moto2 frame. Although the exterior is similar, one can say that the Moto3 Kalex is a new bike.”

Why did you make so many amendments?
“With regard to rigidity and geometry a Moto3 bike acts different from a Moto2 bike. During the last two years we have learnt several things. Jonas Folger was our top rider and in comparison to the other young guys in this category he is pretty heavy and has a special style of riding. We implemented our experiences in one single step of development. Taking into account the first test results, it seems to pay off. All our riders took steps forward, especially on the corner entry. While riding with the new chassis, Philipp Öttl was half a second faster than with the old one.”

What are you aiming at with those amendments?
“We seek for an improved steering response. We have been stable in fast corners, but needed to improve in terms of agility and the feeling on the front wheel. We hope to improve considerably by means of modifications on the chassis geometry and a new weight distribution. Also the seat height was adapted. Basically it was about the center of gravity. Here the positioning of the engine and of the crankshaft was important. Now the engine is more in front and the overall center of gravity was elevated.” 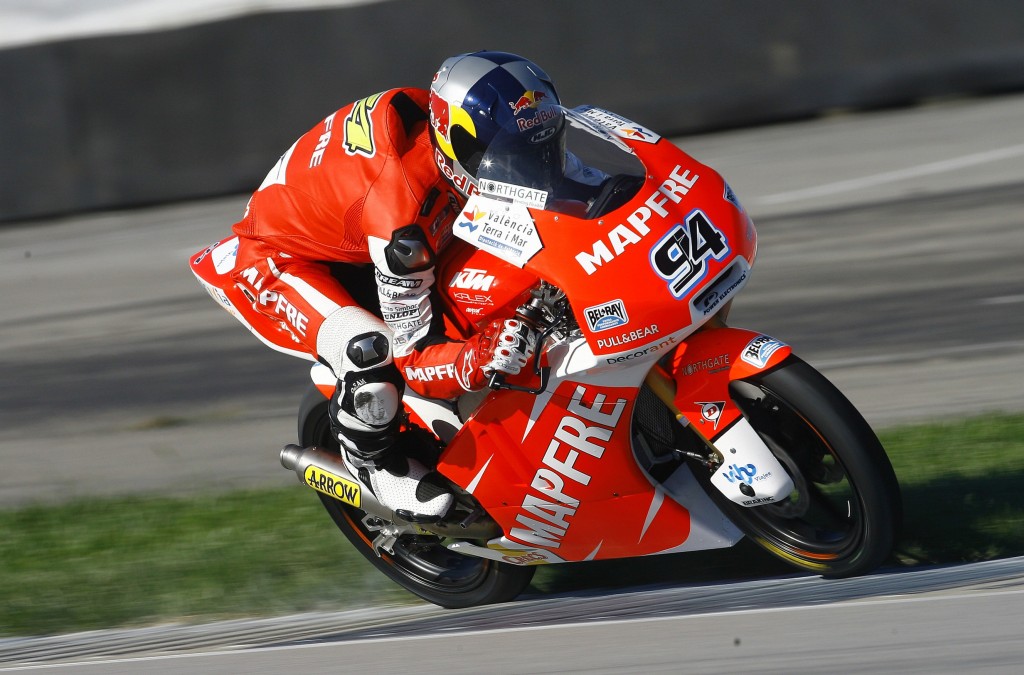 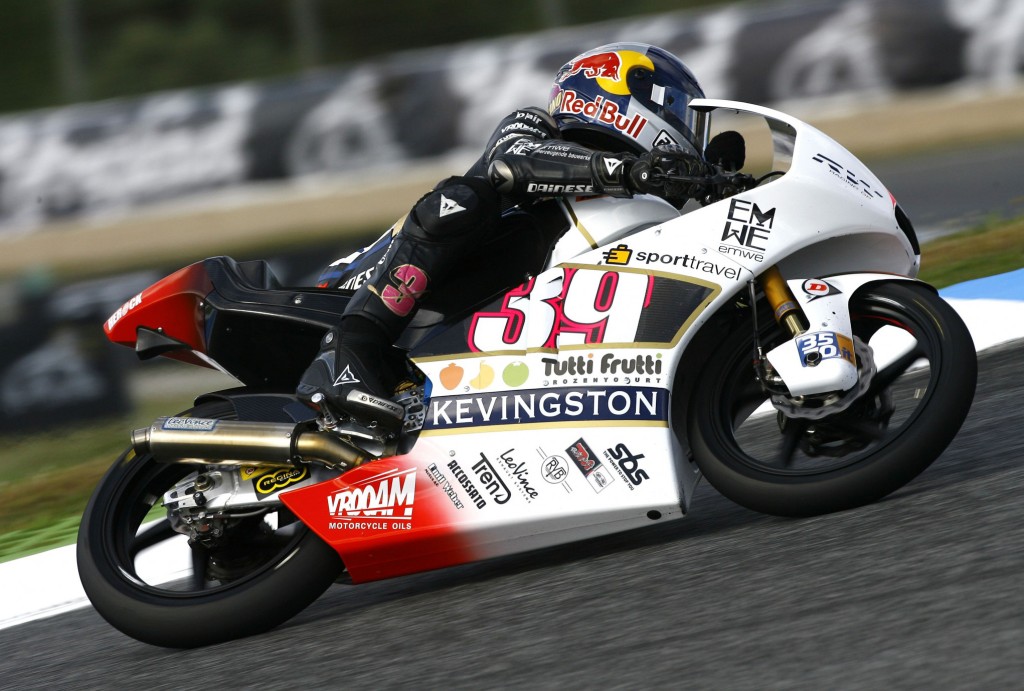 What are the differences between the Kalex aluminium frame and the KTM steel tube frame?
“It´s a different philosophy, but both methods could lead to success as KTM has proven in Moto3 and Kalex in Moto2. So everybody acquires knowledge in one´s field of activity. Aluminium allows more design flexibility while milling. You can vary in wall thickness and processes. It is relatively easy to specifically remove or add material according to the requirements. Finally the overall weight is the same. At the same strength aluminium needs to be scaled stronger than steel. Therefore with steel you can save space, but aluminium offers greater freedom in design, therefore I prefer aluminium.”

You are currently very particular about the design: slim front, bulgy at the bottom and a distinctive tail. And in the future?
“Currently we will stick to the typical Kalex design. Actually it is all about aerodynamics and to minimize the frontal area wherever it is possible and to be bulbous at the bottom. At the beginning we tested in the wind channel in Wolfsburg and afterwards at the Perugia University. Subsequently we are able to simulate the tests by the help of software. We have enough experience to evaluate the results.”

Kalex rapidly established itself in the GP sport. In 2014 fourteen Moto2 and seven Moto3 riders will be equipped by Kalex. Are you satisfied?
“I think we are happy with the current situation and with what we are doing. In the meantime it has become bigger than we expected it to be, but of course we won´t ever complain about that. Everything developed positively without fierce competition and our work and ideas are accepted in the paddock. It´s our wish and ambition to stabilize this situation and to devote more time to the private life, which came off badly in the past few years.”

I can imagine it is a special pleasure to gain victories and win the world championship title?
“Sure. In 2013 we won the manufacturer´s title for the first time and the first four riders in the rider´s championship rode a Kalex bike. It means a lot to us. We supported good riders, were pretty consistent, everything runs perfect and the teams stay with us. Our concept appeals to many people, with regard to costs we are in the middle and haven´t increased the price. Theoretically in 2014 Kalex could have equipped more teams, but we didn´t want to do that. I am an engineer with heart and soul and not a sly businessman. We try to operate in the same way as we would like to be treated ourselves.”

In the Moto3 class the Red Bull KTM Factory Team has won the title twice now. Is it your future aim to be in the same situation?
“Of course, Kalex also wants to win in Moto3. But we are reasonable enough to know that one decisive factor are the top riders and here the manufacturers and factory teams have the first choice, but that´s part of the game.” 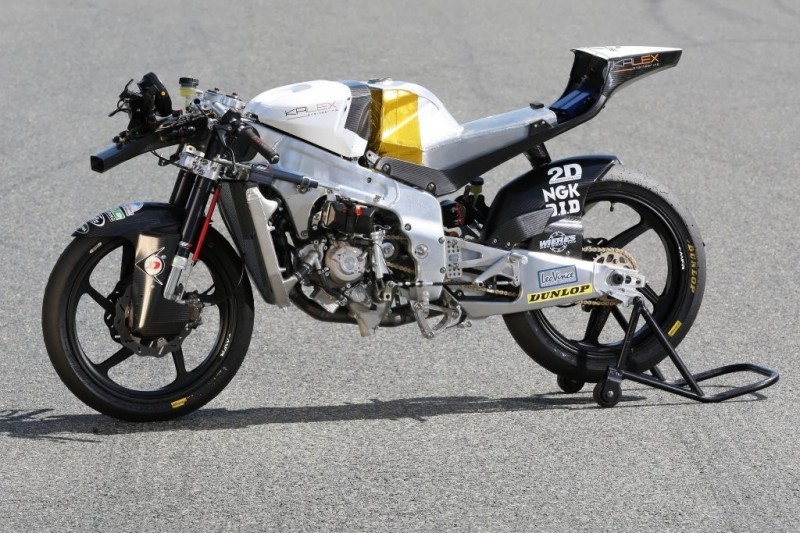