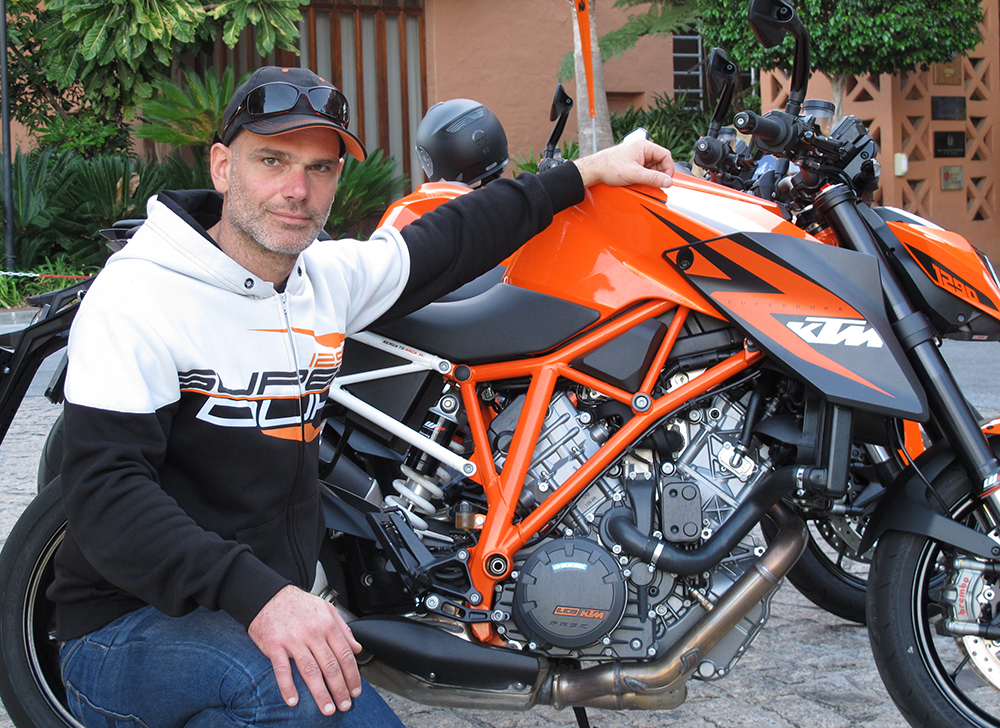 The Birth of “The Beast”: Tech talk with engine developer Peter Gorbach

The 1290 SUPER DUKE R’s 180bhp 1290cc v-twin is an evolution of the RC8 1190cc engine; a unit bursting with power but at the same time a model of driveability. Important elements of the design involve a 3mm larger bore, 2mm longer stroke, corresponding shorter connecting rods, larger throttle valves, twin spark ignition and two balancer shafts. We talked to 43 year old Peter Gorbach – head of the KTM’s engine development and mastermind behind ‘The Beast’s’ supreme force – and picked out a few interesting details to discuss from this standout motorcycle. 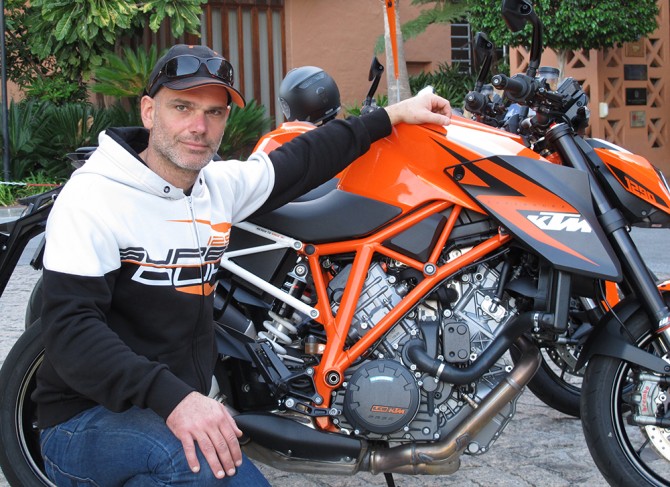 What was the best and the most difficult part of the 1290’s engine development?
“The most difficult was development of the piston. To make the bore and stroke greater but to keep the weight the same…well, we knew that it would be difficult. We managed it by giving a lot of respect to the basic design. The piston pin is now 20mm in diameter, which is two millimetres smaller than that found in the engine of the previous 990 Super Duke R. Furthermore the stiffness of the piston has been optimized by finite element analysis. As the very first sample component arrived we could see that the structure was perfect and that was a very rewarding moment for us. We just had to slightly adjust the micrograph profile and modify the rings to get oil consumption on the safe side and then the piston worked. That was a beautiful moment and really satisfying.”

Micrograph – can you explain what this means?
“The piston profile is not cylindrical because the piston thermally expands when in use, mostly at the top. Therefore, the piston shape tapers from the bottom to the top. Also the diameter of the piston is not exactly rounded but slightly oval. The profile is optimized, so that it precisely fits the cylinder under maximum working pressure. The degree of the oval shape varies in the range of 40 to 50 microns.”* 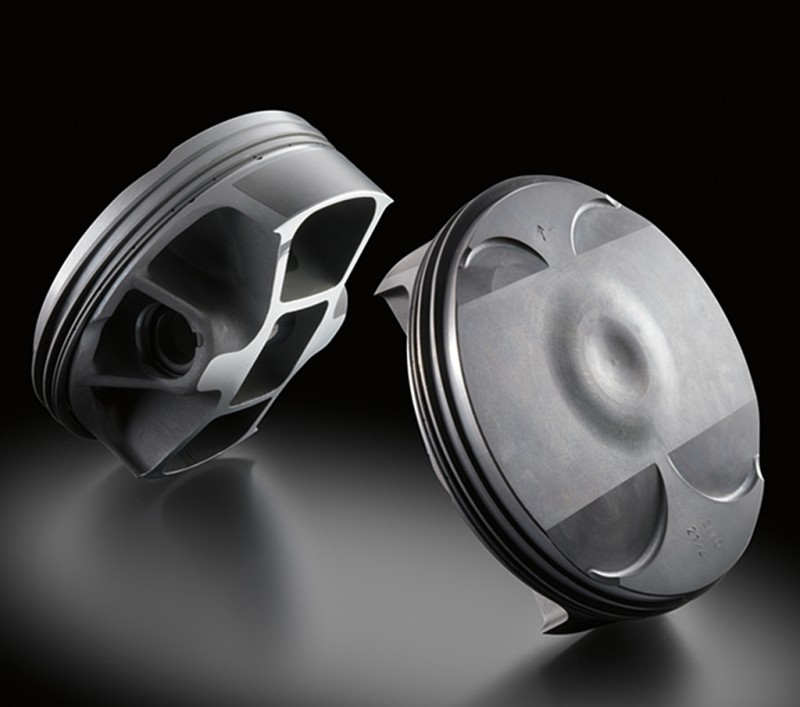 Photos show that the piston is also coated on its sides. Why is that?
“This is a grafal coating, which is designed for the running-in phase and is also important for extended engine life. Grafal is a product of German piston manufacturer ‘Mahle’ and is applied by a screen-printing method. Thus from the first moment piston friction is reduced and resembles that of an already run-in component.”

Are there big differences in the valve train compared to the RC8 engine?
“The camshaft is different. The valve diameters are the same. We have steel valves in the 1290 SUPER DUKE R, not titanium because the engine speed is lower. The camshaft also has a different cam profile, which has been specifically optimized for this engine.”

Bench tests for verifying durability are common in the business and the specific numbers can be very impressive. How does KTM fare?
“Firstly riding as a customer would mean that it would take too long. You’d almost have to allow the engine to run forever idling or under partial load to simulate city riding, which is virtually irrelevant to the structure of the engine. These areas are checked during our in-house endurance runs on the road. When it comes to durability, in order to save time, dynamic cycles are made on the dyno where predominantly high speeds are made and recorded in order to examine whether such states will lead to possible damage. We do this whole process over 150 hours. The consumption on the test bed is around 30 litres of petrol per hour because the engine is pushed at full throttle almost all the time. So, as you can imagine, the load imposed is very high but this is something an engine must endure.” 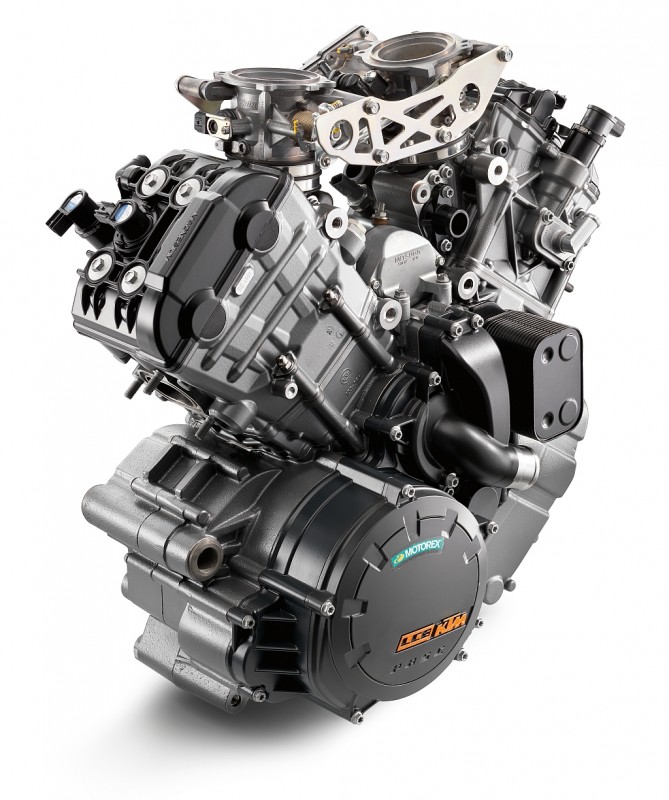 What is the biggest challenge for an engine developer these days?
“Our v-twin engine increased in size practically everywhere. Bore, stroke, even butterfly valves and inlet channels; which doesn’t make it easier to achieve good results in the partial load range. At the same time bikes must get quieter. Overall, everything becomes more difficult because also exhaust gas legislation is getting more restrictive. The art of the process is to actually augment very good driveability. Therefore you have to test a lot and there are many parameters you can play with: timing, compression, combustion chamber, inlet duct, throttle, air box, exhaust, exhaust port. All must harmonize and at the end you have 180bhp, but when accelerating from low revs the engine should stay smooth and controllable. This is only possible if every detail has been optimized to the last millimetre, the electronic system responds well, and features such as ride-by-wire are fully taken into account. Everything has to fit together perfectly and this is exactly what we have done with the 1290 SUPER DUKE R.”

77 Responses to The Birth of “The Beast”: Tech talk with engine developer Peter Gorbach