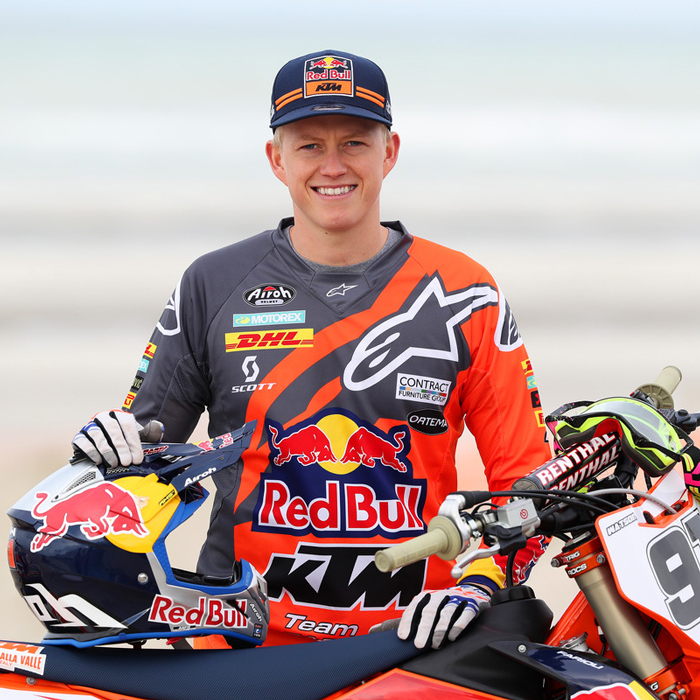 In a world of specialists, a racer like Nathan Watson has become the exception to the norm. From motocross to enduro, hard enduro and back to beach racing, he’s achieved success every step of the way. He’s taken on the best in the world and more often than not he’s beaten them. 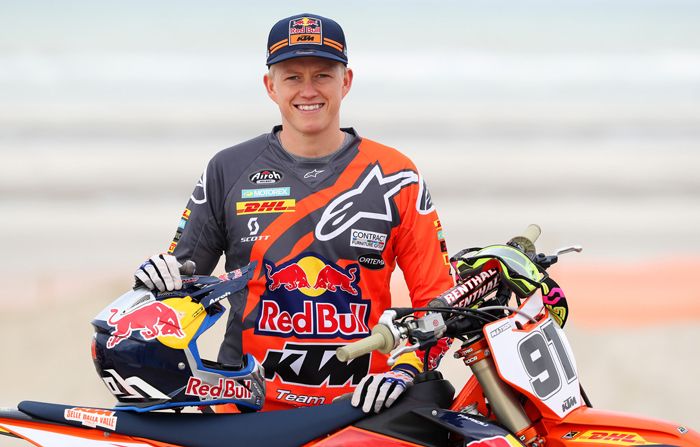 Last year was arguably the Red Bull KTM Factory Racing star’s most fruitful, and busiest, season to date. Kicking things off by becoming the first British rider to win the infamous Enduropale du Touquet beach race, then in complete contrast he went on to finish iconic hard enduro events like the Red Bull Romaniacs.

Claiming a victory and multiple podiums in the WESS Enduro World Championship, he incredibly capped things off by helping Great Britain to third overall in the Motocross of Nations. In essence, 2019 perfectly encapsulated Nathan as a rider – always ready to ‘give it a go’ and unafraid to face challenges head on. 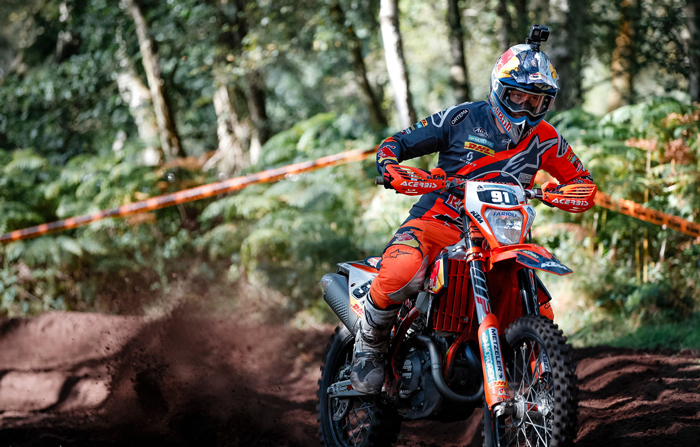 Watson is familiar with racing at speed, here he is on his way to winning at the Hawkstone Park Cross-Country WESS Enduro World Championship round in 2019. PC @Future7Media

“Although I didn’t switch professionally to enduro until 2016, my first experience of it came back in 2011, at the British Sprint Enduro Championship in Wales. By chance we had a free weekend and the weather was good, so Dad took me and my brother to race it. I had no idea what I was getting into. I didn’t really understand the format of racing against the clock, but I seemed to adapt quickly. I actually managed to win the first day riding a borrowed KTM 350 EXC-F against Jamie and Danny McCanney, but never pursued it further because back then motocross was my only focus.” 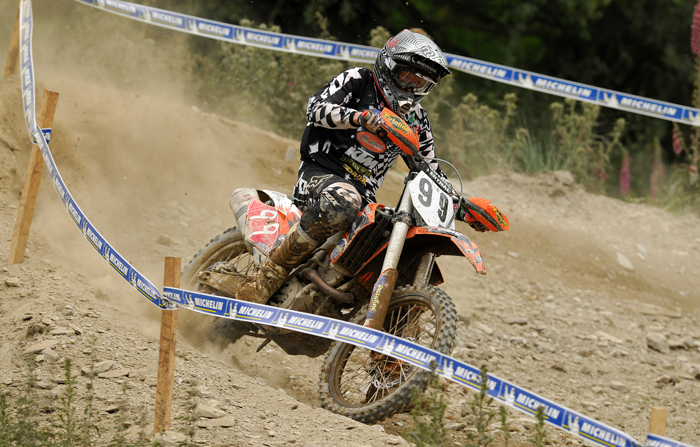 In 2011 Watson raced his first enduro event in the UK; he went on to switch his focus to the discipline in 2016.
PC @Future7Media

“The first special test of an enduro is so important. Get it wrong and you can lose so much – often it’s the difference between a good and bad day. When I started enduro in 2016, that was the toughest thing for me to get my head around. In motocross you’ve time to figure out how to go fast. There are practice sessions, qualification and then racing, whereas in enduro within minutes of starting you’ve got to switch it on. Walking is everything in enduro and you need to visualize the lines you want to take.”

“I won some Enduro 2 class races in 2016, but taking my first EnduroGP victory in 2017 on the KTM 350 EXC-F was quite special. It happened in Greece and up to that point things were a bit mixed. I had a small injury earlier in the year and it took time to fix. Everything just sort of flowed in Greece. It was a great confidence boost to prove myself like that. The following weekend in Portugal I kept that form and won by 90 seconds on the opening day. Looking back, it’s unfortunate that the start to my season wasn’t as good as how it ended, I feel I could have been a much stronger title contender that year.” 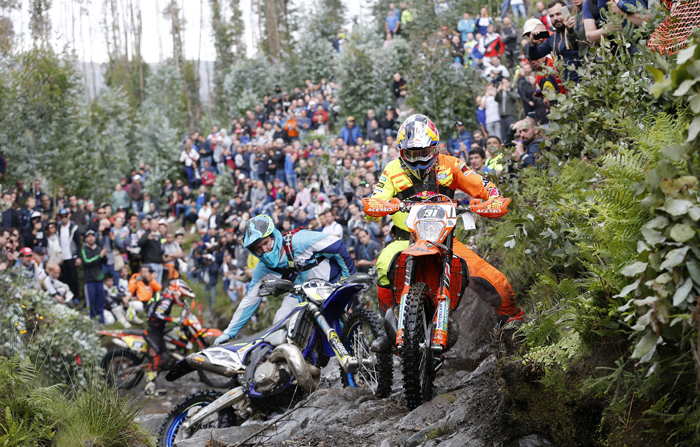 Watson’s first race on a 2-stroke was at the Extreme XL Lagares in 2018 – in his words it was a ‘real baptism of fire’.
PC @Future7Media

“My first race on a 2-stroke, a KTM 300 EXC, was also my first Hard Enduro. Extreme Lagares was the opening round of the 2018 WESS Enduro World Championship and it was a real baptism of fire. I was wet behind the ears going into that, as they say. I knew it would be tough, but never imagined how tough. Those riverbeds were so slippery, if you made a mistake you literally slipped about 10 meters back. It gave me huge respect for the top guys – how they can make the impossible look easy is impressive.” 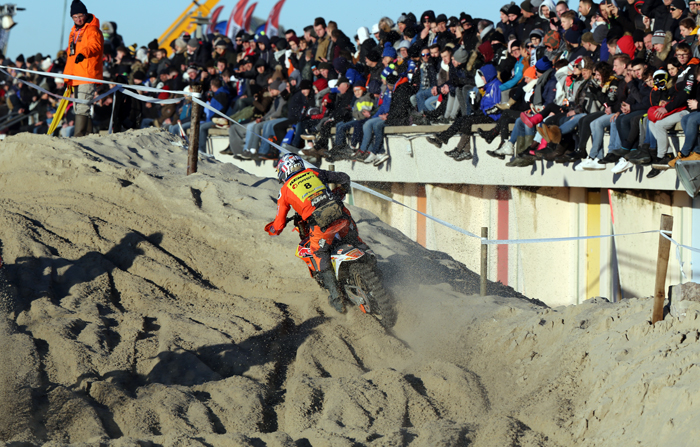 In the winter Watson races the French Beach Race series – here he is on his way to making history at the famous Enduropale du Touquet race. PC @PascalHaudiquert

“My first taste of the Red Bull Romaniacs is a day I will never forget. I’d just raced Extreme Lagares and the Red Bull Erzbergrodeo, but this was on another level. The weather was horrendous, and it was my first-time using GPS navigation. I got lost so many times. My bike ended up in a tree and I had to ask Bronze class riders to help me get it out. I think we were on the mountain for about 10 hours, it was crazy and still only the first day of four. People have asked why I didn’t quit, but part of me just likes a challenge. I like to push my limits beyond what I think I can do and not give up. Enduro can be a mental challenge and those days always make you stronger further down the road.” 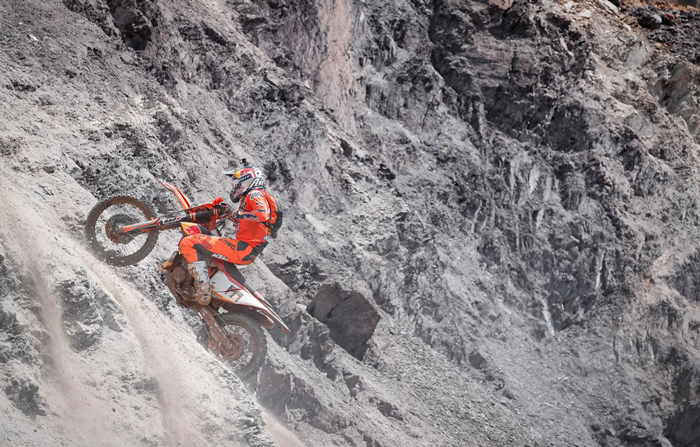 Battling the Iron Giant at the Red Bull Erzbergrodeo – Watson has raced some of the toughest events on the planet in the WESS Enduro World Championship. PC @Future7Media

“After a year learning hard enduro it was nice to end my season with a debut WESS win at Red Bull Knock Out. I wanted to go there and give my best. I knew I could be strong in the sand because I’ve always thrived in those conditions, but with guys like Glenn Coldenhoff racing I didn’t expect to win. Thankfully we had my KTM 450 SX-F set up perfectly and it was a dream to ride. I put everything I had into that race and won – it was an amazing weekend.” 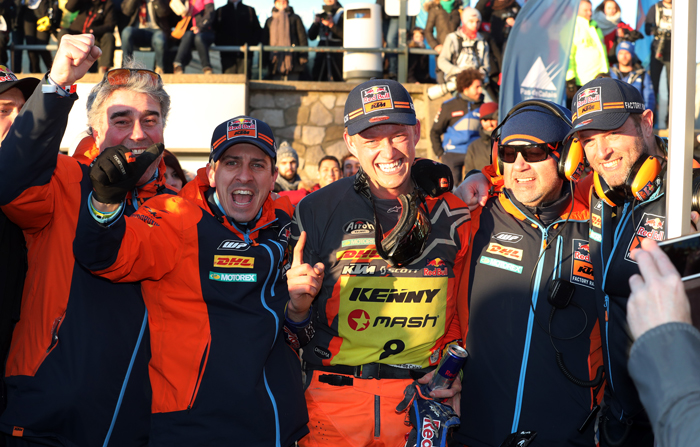 “Enduropale le Touquet is the pinnacle of beach racing and is the biggest race in France. It’s steeped in so much history and as a child I dreamed of winning it. To do it in 2019 was magical, really. The track itself is actually quite basic compared to other beach races – it’s mainly straights and chicanes. But add in 1,000 other riders and it gets hard. It’s also the one everybody wants to win, so more risks are taken – especially at the start. I don’t enjoy the pace in the early laps because it’s so fast, but I think my time spent in enduro at places like Romaniacs has helped me to dig deep and find something extra in the final stages. Everything came together perfectly in 2019 and we won. It’s been the biggest achievement of my life so far.” 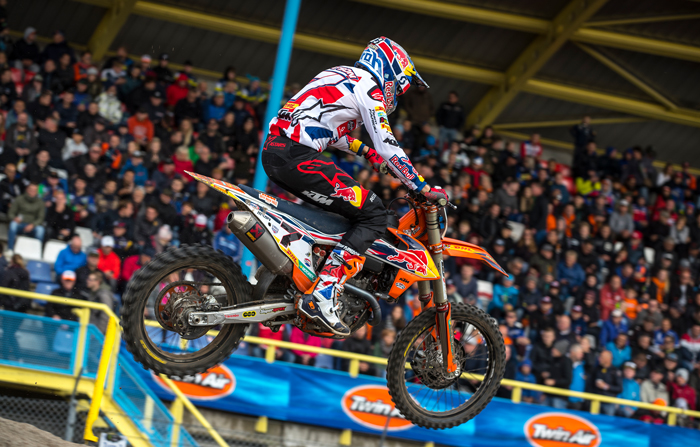 Competing for Great Britain at the prestigious Motocross of Nations in Assen, The Netherlands 2019 – Watson helped the team to a podium finish and showed he can still mix it up with the MXGP regulars. PC @RayArcher

“Getting selected for the Motocross of Nations in 2019 with Great Britain was a dream come true. When I moved to enduro I thought that opportunity would never happen and until then it was something that bothered me. Being picked for the team was a last-minute thing. I was racing WESS. I actually won Hawkstone Park Cross-Country the weekend before Assen and was back racing classic enduro the weekend after it. But when an opportunity like that arises you make it work. KTM put an amazing bike together for me with the KTM 450 SX-F and we raced on the biggest stage of motocross. Capping it off with a podium result was unbelievable.” 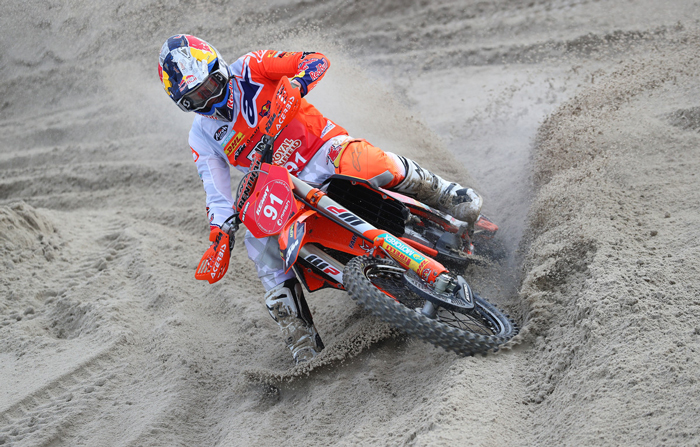 Watson won a second consecutive French Beach Race title in 2020, but his season is currently on pause until the Covid-19 restrictions are reduced. PC @PascalHaudiquert

“After winning the French Beach Race title earlier in the year it’s been strange to put racing on hold due to coronavirus, but that break has given me an opportunity to close the chapter on a successful 2019. I’m hungry to take another step forward in the WESS Enduro World Championship and to win some more races, let’s hope we’re back out there competing soon.”