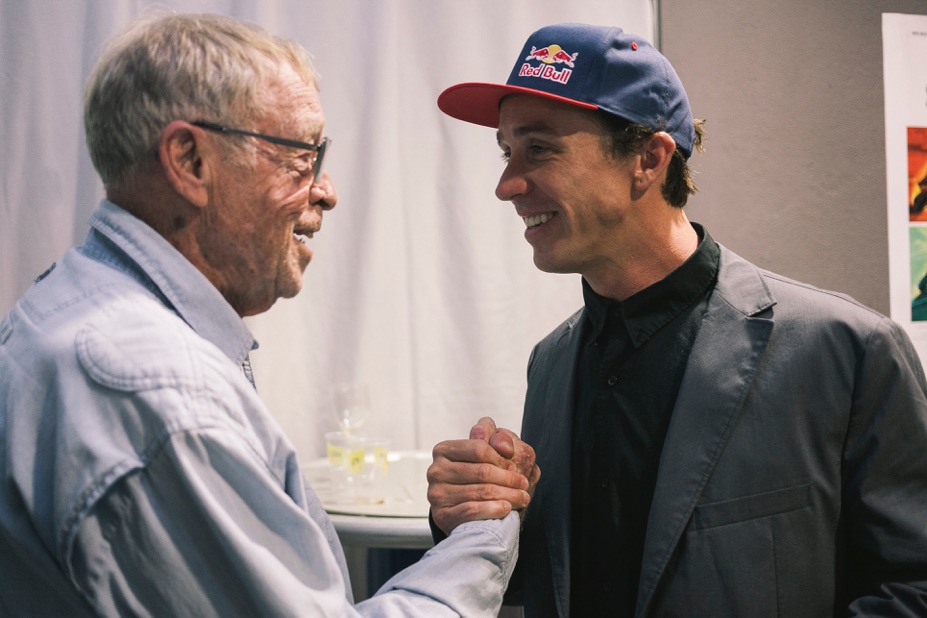 “On Any Sunday: The Next chapter” – Interview with Freestyle rider Robbie Maddison

Robbie Maddison is, without a doubt, the biggest motorcycle daredevil on the face of the planet today. A top-level freestyle rider, a Hollywood stuntman, a world record distance jumper and responsible for some of the sickest and most daring stunts ever performed on a motorcycle. 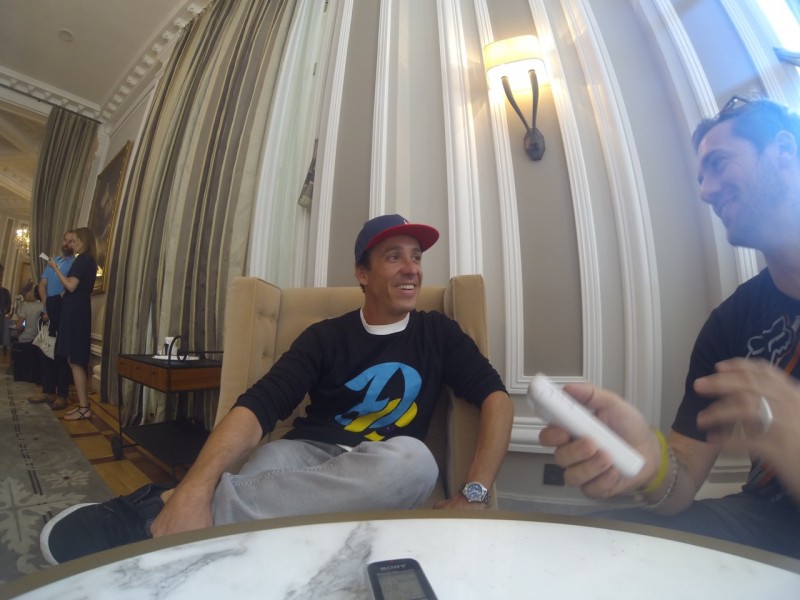 Robbie Maddison “On Any Sunday: The Next Chapter” San Sebastián/Spain

Robbie Maddison is one of the stars in the KTM-supported film, “On Any Sunday: The Next Chapter”, which features his latest stunt (Skullcandy: Robbie Maddison´s Drop In). KTM BLOG caught up with him after the OAS premier at the San Sebastián Film Festival in Spain.

Hey Robbie, how’s it going?
“I’m doing great. I’m currently promoting a film I’m in, “On Any Sunday: The Next Chapter”. I’m here with the whole family.”

The whole family always travels together?
“Before we had kids, Amy (Robbie’s wife) and I were together 24/7. She’s my match. I never get tired of her, I’m stoked I found her and I love being around her. We’ve been together for ten years and I think in that time we’ve spent nine years 364 days together; until we had kids there had only been a couple of trips I’ve done alone but then after having Cruz (Robbie’s first son), Amy stopped travelling so much with me.

So I’ve been doing my own thing for work. When shooting Skyfall (Robbie won an award for his stunt work in the James Bond film), I was in Istanbul on my own for three months. It was tough being away form her and the family, but you grow. You learn stuff. You see how important they are to you. How much you miss them.

It’s really generous of Red Bull Media House to fly us all out to Spain for the premiere and I’m honoured my family can share this with me. Jagger (Robbie’s youngest son) is at the age when he’s still a free ticket (on an airplane) so, luckily my wife’s a trooper and lets him sit on her lap during the flight so I can get my rest and do what I need to do when I get off the plane at the other end.

It’s cool to keep the family together. I think a family that travels together, stays together. It’s definitely easier to not have them around, but my kids are learning key life skills now subconsciously. By being at these events and meeting so many people from different cultures and races it makes them really confident and they’re communicating well. I mean, I never travelled as a kid but my kids don’t know any different. When Cruz has to sit in an economy seat he’s like “Dad, I want the bigger seat!” (laughs) He just doesn’t realize how spoilt he is!”

Would you want your sons to follow in your bootsteps?
“Bootsteps? I love that. That’s awesome. Honestly, I feel sorry for my parents from what I’ve put them through. I would hate to see my son going out there and doing the same stuff as me – risking his life. But I’ve always said – and I will maintain this – that I will support my kids in anything they want to do. Whether they want to be a ballet dancer, street artist, lawyer … actually, hopefully something more upbeat. I’d really love to see one of them get into the PGA. I love golf, so I’d be more than happy to be a caddy!

But this is what “On Any Sunday” does. The film shows the passion we all share as bike riders; whether you are riding a trail, commuting to work or you’re jumping over the Corinth Canal (laughs), we all share a common bond. It’s a passion. You’re free on a bike, you’re in control – you decide you’re destination and how you take it. Sure, you’re taking risks, but nothing beats that freedom and enjoyment that bikes give you. I can’t blame my kids if they fall in love with that. I fell in love with bikes and I’ve had a love affair with a motorcycle now for 30 years.

My kids are already hooked on bikes. I asked my four-year old what he dreamt about last night and he tells me, ‘Motorbikes! I was doing jumps and backflips’. I´m doomed. I am doomed. But I’m definitely not going to steer them away from motorcycles. Hopefully they’re not driven to being as crazy on them and pushing the limits as I am on them, but I get it if they do. Kids always want to be like their dad. I’m sure I’ve got what’s coming to me – I’ve put my parents through hell!”

“But this is what On Any Sunday does. The film shows the passion we all share as bike riders …” 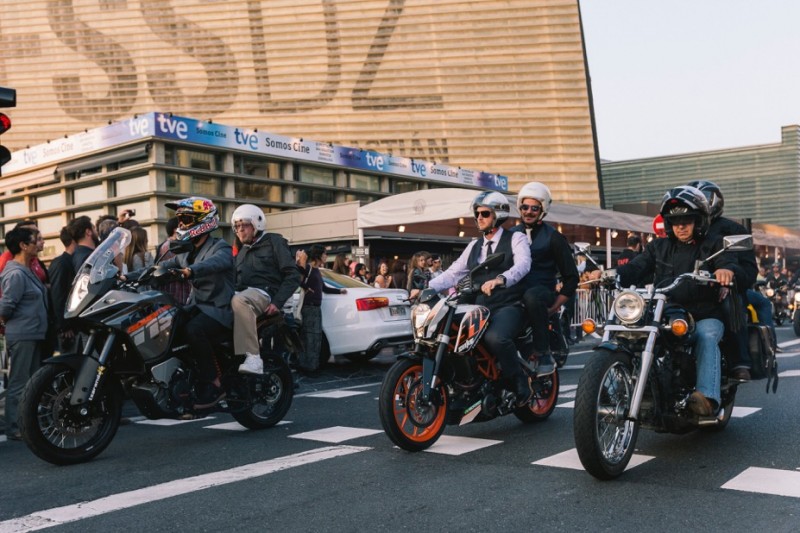 “On Any Sunday: The Next Chapter” San Sebastián 2014

You’ve given the world some of the best motorcycle stunts; do you have a personal favourite?
“Honestly, jumping on and off the Arc de Triumph in Las Vegas in 2008 (Robbie Maddison´s 2008 New Year´s Eve jump). That was a turning point in my life. I had to be ok with the idea of death to do that jump. Death is probably the biggest fear that man has. When you let go of that fear and you’re happy to accept it there’s a crazy transformation that happens in the body and you see life and appreciate things in a whole different way.

I went into the depths of my core, of my soul, of my being to the point of almost totally going crazy thinking ‘what am I doing?’ but I had to go to those lengths to realize this is what I am here for. This is what I’m meant to do. I honestly believe I am meant to ride my motorcycle and take these risks.

As a young kid, my dreams were filled with flying, riding motorcycles and being in films. These were my ambitions. I wanted to be a star on a motorcycle. And this happened, so it’s cool. It’s been a wild ride.”

So you’ve caught the attention of the world with your stunts and been in box office films, so what is there left for Robbie Maddison to achieve?
“After these stunts I ask myself what is there left to do? Where do I go next? But if I ask that question to the universe and don’t try and figure the answer out myself, it’s funny how it answers you back.

It’s one of those things, I think if you try to figure everything out in life you can get stuck because you try to think it through too much. Sometimes you need to just let the next path subconsciously come out. My best ideas have come when I haven’t’ thought about them.

For example, I had the mega opportunity to do a New Years Eve stunt with ESPN and Red Bull, which turned out to be the Arc de Triumph jump. I set aside weeks to come up with an idea and had just about given up. I thought, ‘well if it’s meant to happen, it will happen’. Once I let go of the pressures then that’s when the ideas come. The next day I was driving along the freeway and happened to look up at this building and I realized with the right ramp and right speed I could jump on top of that.

Life answers when you are not expecting it and if you follow your passion new things come up. I’m always looking for what’s next, new and exciting and not opposed to anything.

What can I do with my motorcycle next? I don’t know. But it will come. There’s still room to grow! That really could have been the short answer to what is a long reply (laughs).”

“Life answers when you are not expecting it and if you follow your passion new things come up.” 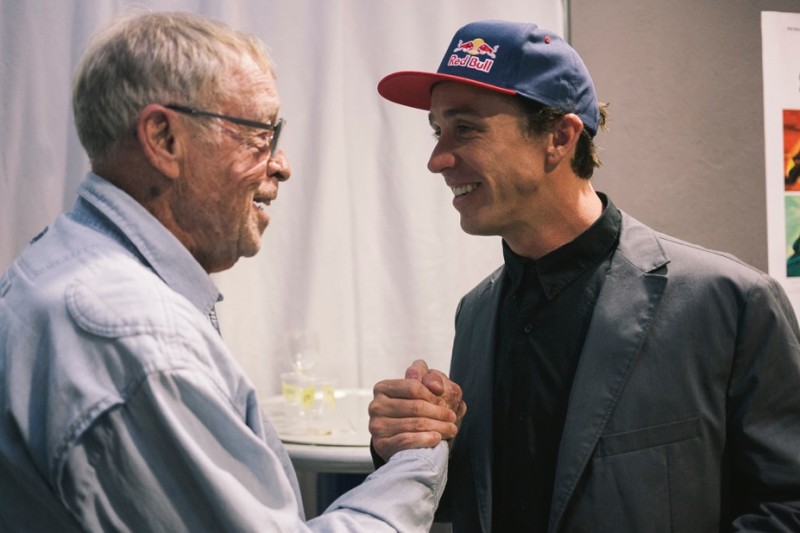 The film “On Any Sunday: The Next Chapter“, produced by Red Bull Media House and partially funded by KTM, is an exploration into the pursuit of excitement, passion and life in the two-wheeled world of motorcycle riding, directed by Dana Brown – son of Bruce, the director of the original “On Any Sunday“ (1971) film.

68 Responses to “On Any Sunday: The Next chapter” – Interview with Freestyle rider Robbie Maddison