After more than 1,685 kilometres of riding, 1,346 kilometres of timed special stages, Sam Sunderland brought his KTM 450 RALLY home as runner-up at the recent Atacama Rally. More importantly, the British rider had earned himself enough points to claim the 2019 FIM Cross-Country Rallies World Championship – his first ever world title. With victories at rounds one and two of this year’s championship, Sam Sunderland was very much the man on form and favourite for the title. Going into the third round – the Atacama Rally in Chile – the 2017 Dakar Rally Champion had no plans to claim the title. The goal, as often is in the challenging world of rallying, was to get through the event safely and collect as many points as possible.

“To be honest,” admits Sunderland, “I didn’t realise I could even win the world championship early. Not until the day before the final stage at Atacama. We were talking about the race and I made a joke to Jordi that if Pablo stopped, would I win the championship. Jordi then told me, the only thing I had to do to win was beat Kevin (Benavides) and the title was mine. That night it was all going around and around in my head – don’t make any mistakes, stay calm, just do what you’ve been doing. Rally is so mentally challenging with the long hours and the navigation – I think the team just didn’t tell me in case it upset my rhythm or affected my focus on that last stage. Luckily everything went well and the boys were there at the finish to celebrate.” 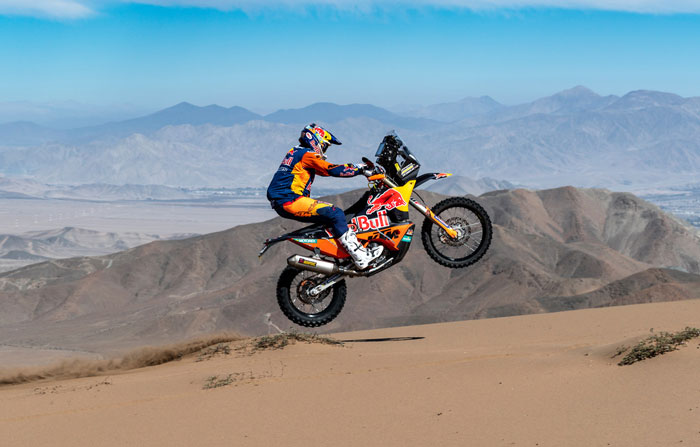 Although Sam had topped the podium at the first two rounds, it was by no means an easy task. Both the Abu Dhabi Desert Challenge and the Silk Way Rally were seriously tough events. The Silk Way opened registrations to motorcycles for the first time ever in 2019 and with the event covering over 5,000 kilometres through Russia, Mongolia and China, the epic event tested riders, their bikes and their teams to the maximum.

“Everyone went in to that event as rookies as it’s never been open to motorcycles before. It was a big learning experience. It’s true that the likes of Toby, Matthias and Pablo weren’t riding at the beginning of the season, but that just makes everyone else step up their game. HRC always field a strong team and were a real threat all season. No matter the competition, you still have to successfully complete each event too, and just finishing the Silk Way is an accomplishment in itself.” 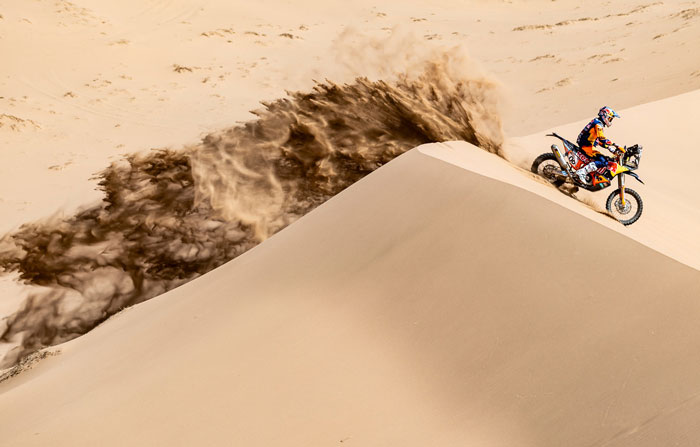 Fast forward to the Atacama Rally and Sam, once again, was riding the perfect event – consistent, yet fast stage times and making the minimum of mistakes on the fast, tricky-to-navigate timed specials. With the event’s marathon stage incorporating the two longest days of the rally, it was always going to be a challenge to get through the 800 kilometres without issue. For Sam, that issue came in the form of a bent rear disc. Facing a long stage four, the team decided to swap out the damaged item with one from a fellow teammates’ bike.

“Changing the rear disc was more like a precaution – I had ridden most of that stage with the disc bent so it wasn’t too bad, I could just sense a bit of movement there. The danger is, if that small bend in the disc causes the brake to heat up, or the pads to wear out, I could be without a brake for the next stage, and it was the longest stage of the event. There is always a risk in changing something like that too – on the marathon stage you’re not allowed to receive any assistance from the team so everything has to be done by the riders. 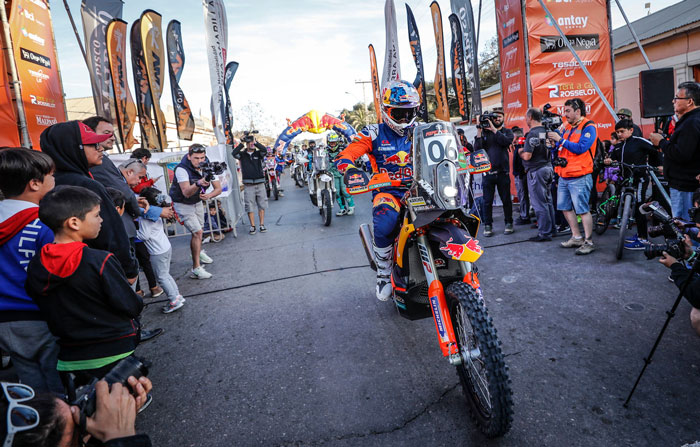 Normally I would have taken Matthias’ disc as he was lower down the order, but he had bent his disc too and it was possibly as bad as mine.  Toby and I are really good friends and he just stepped up and said ‘sure, just use mine – no problems,’ he didn’t even question it, I guess it’s just what we do for each other in the team. For sure, I’d do the same for him, but what you have to remember is, he then had to ride the whole of the next stage with a rear brake that wasn’t 100 percent – it’s a real big ask, so I have to say thanks to him for what he did. As it happens, we finished one-two on that stage with Toby getting the stage win, so it worked out really well in the end.”

The marathon stage was not completely without additional drama. Overnight, riders stay in a temporary bivouac, often in less comfortable conditions than they are used to. The Atacama was no exception and a few of the riders found it tough to get to sleep. 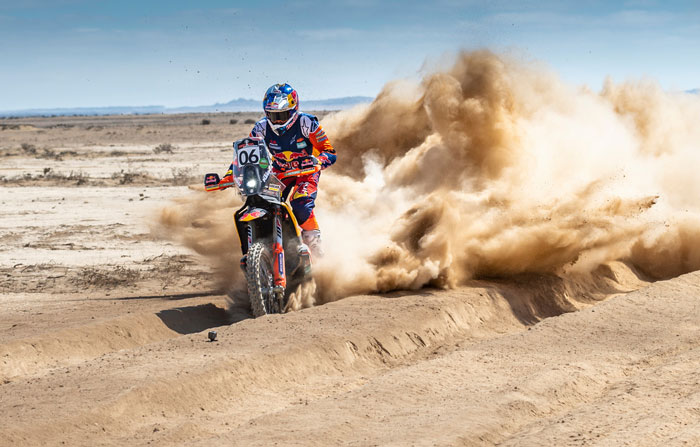 “There was one funny story from the marathon stage,” laughs Sunderland, “there was a bit of an issue that night. The car guys were having a bit of a laugh and didn’t want to sleep and I think one of the bike riders had had enough – there was a bit of an argument, but it resolved itself ok and we all got some rest before the next day. The best thing about the marathon stages in rally is, it brings all the riders together, everyone is in the same situation with no comforts, no mechanics and quite often in the middle of nowhere. The Atacama was bad for me as when I got to the Bivouac, I went to get my phone out of my pocket and it had turned itself into a flip-phone – it was bent in two and the screen was all smashed – not what you need after a stage like that. The atmosphere is good though and it’s nice to spend time with the non-factory guys. They put a lot of hard work and time into racing the events and it’s good to hang out with them and relax.”

On the final day in Chile, maintaining his impressive pace to the chequered flag, Sam did exactly what was needed to win the championship, with one round to spare. The Red Bull KTM Factory Racing team were waiting for him armed with the traditional celebratory banners and t-shirts. 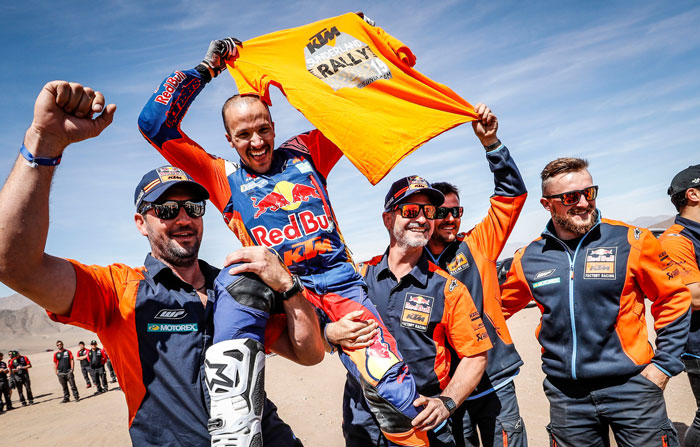 “It’s super-nice that they do it and it was a nice surprise when I crossed the finish line in Chile. To celebrate like that with the whole team is a really special feeling. I know the team have prepared t-shirts for me twice before and unfortunately they’ve had to stay in the bag when I twice finished runner-up in the championship.”

Now with the championship decided, Sam can relax going into the final round – the Rally du Maroc – in Morocco in early October. With the focus already on Dakar Rally preparation, the Brit has the advantage that he can use the event to work on bike set up under full race conditions – a luxury not often possible when chasing a title. 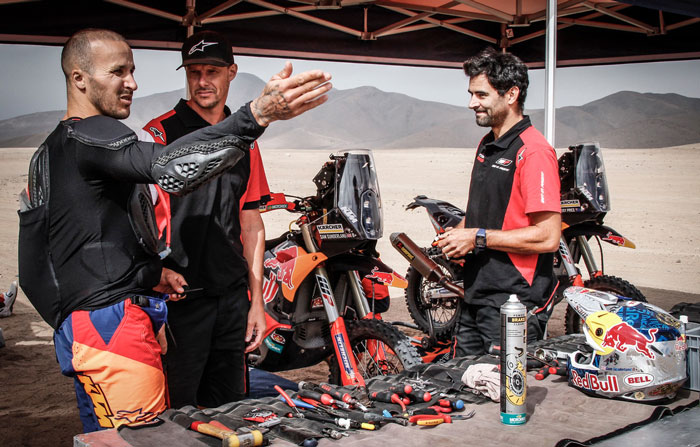 “Now the pressure is off, it will be nice to have a good safe run in Morocco without having to take any unnecessary risks. The best thing is, we’re able to test things and change a lot of settings mid-race. You’re not able to do that so much in a championship fight as you don’t want to change the way the bike feels or try something extreme that might not work at all. With no pressure, we can try new things as the rally goes on and to have that opportunity to test under full race conditions is a real advantage. Overall, I’m really happy with how the bike is feeling at the moment anyway, we made some big changes to the bike before Silk Way and then after that there were just the tweaks I wanted to try on the run up to the Atacama. I’m a racer though, racers always want to win, so when we get to Morocco, I’m still going to be taking things seriously, it’ll just be nice not to have to fight quite so hard.”

After Christmas and New Year, it’ll be straight into the Dakar Rally and of course, its first year in Saudi Arabia. A Dubai resident for 10 years, Sam is looking forward to taking on the new challenge of the race in the Middle East. 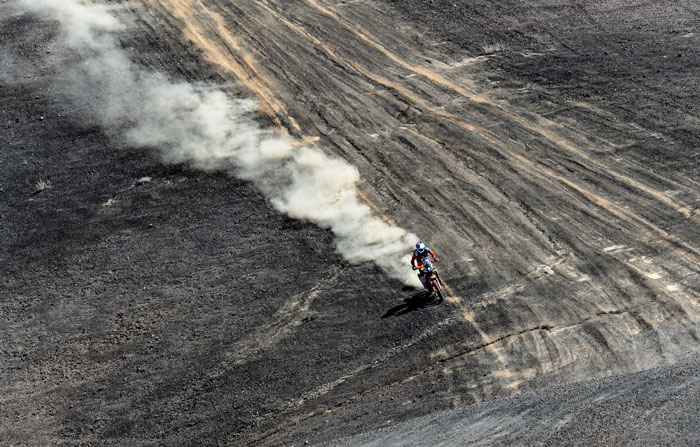 “For me, I was quite happy when I found out the Dakar would be held in Saudi. I have a good idea of the sort of terrain we’ll encounter and how the general mentality is and how the people are. All these things come together to help you feel more relaxed and comfortable when facing a race like the Dakar. One of the best things about a whole new race over new ground is that it’s a clean slate for everyone. Over recent years when we’ve been in South America, there’s always one local guy that goes fast – in Peru there’s a Peruvian guy that has some information on the stages, in Argentina there’s one Argentinian rider who is super-fast. With the Dakar moving to Saudi Arabia, it should be a fair race for all.” 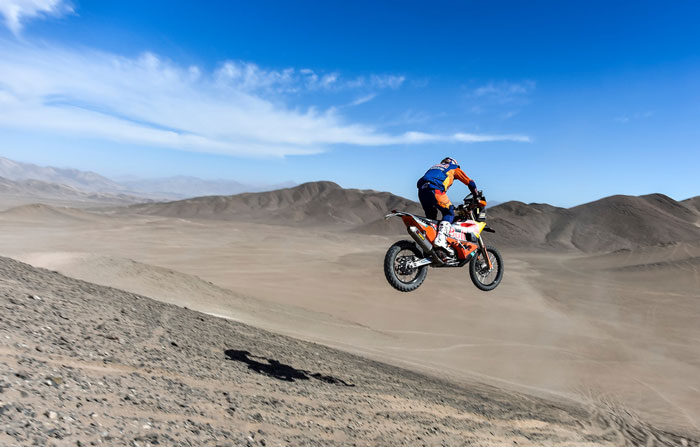 The goal for Dakar 2020 will be as always – to get through the event safely and secure a strong result. However, with Toby winning in 2016, Sam in 2017, Matthias claiming victory in 2018 and then Toby winning again this year, surely it must be Sam’s turn once again to pick up that iconic Dakar trophy?

“That sounds pretty good! Of course, it’s the goal and once you have won once you want to get more – nothing else compares. When you win, you raise the bar to that level. When you come second people just say, ‘better luck next time’. For yourself, you know just how hard you tried and how close you came, but from the outside, second place is second place – it’s never enough. That’s racing I suppose, I want to win again and to put it simply, that’s what all the work is for.”