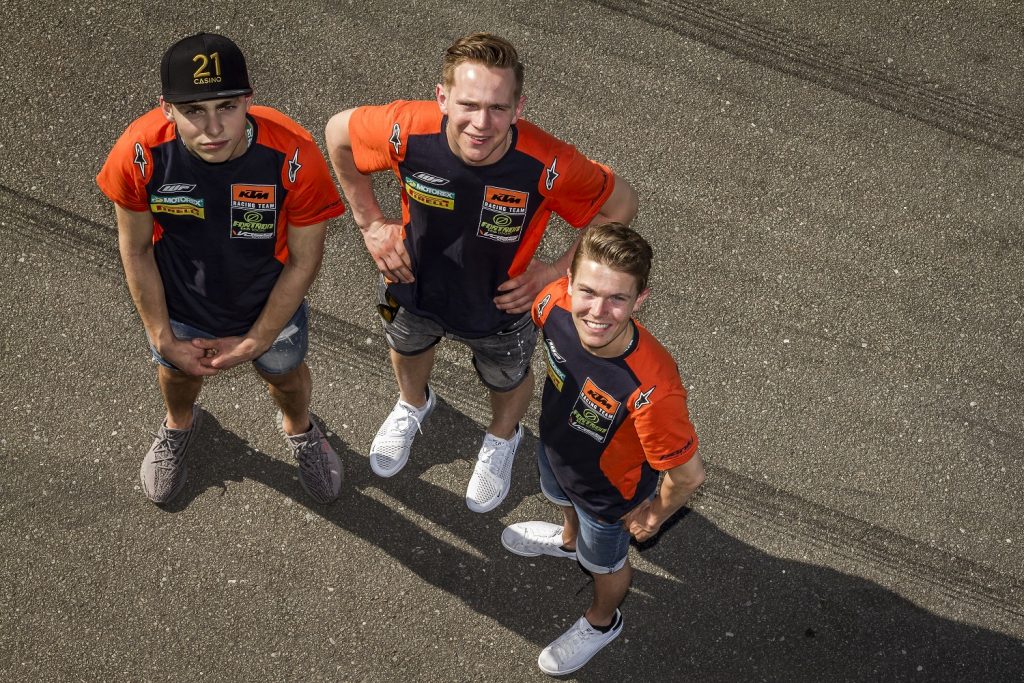 The strong connection between KTM and the Netherlands is hard to miss. Jeffrey Herlings and Glenn Coldenhoff are going strong for the Austrian manufacturer, while the orange bond has been further strengthened with the coming of KTM Fortron Racing Team in World Supersport 300.

For years Arie Vos was the man to beat in the Netherlands. Both in Supersport 600 as well as the Superbike class, he was the uncatchable man. He took a grand total of eight national titles and tried his luck also internationally. Unfortunately, that adventure did not pan out as the Dutchman had hoped. After that one chance, he was never given another, as he had started out his racing career at a relatively late age. “I was already 28 years old when I had my first wild card in World Supersport 600. At that point I’d only been racing for three years,” Vos explains. “I showed quick progress, but obviously my age played a part. I came home eighth for that wild card attempt, which wasn’t bad at all. If I would’ve been twenty at the time, things might’ve went very different from there. I’m not sad about it at all; I had a great run, winning eight titles nationally. I gave it my all.” 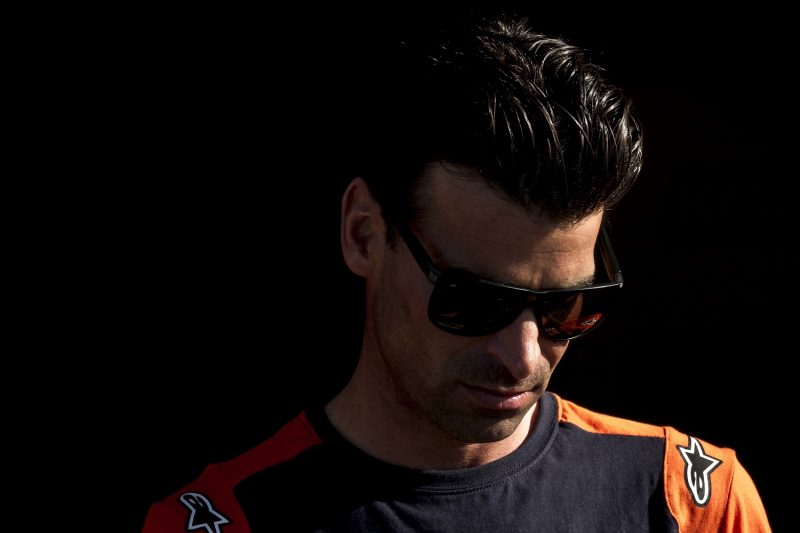 The former racer has since quit the racing game a few years ago, but nowadays he’s all about mentoring young talent in motor racing. As co-owner of Vos Oss Motoren (KTM dealership in the south of the Netherlands) he’s been part of the popular KTM RC CUP since 2015. “When you first retire, you’re glad to have your weekends back, no more endless weekends hanging around racetracks. Just doing whatever you like, spending time with the kids, which is a lot of fun and very important to me. But then I came across the opportunity to set up the cup in the Netherlands and dove into the adventure head first. I love giving young riders a chance at the fun of racing, same as I got. I really like helping them get ahead in the sport, if there’s ever a chance.”

Hectic preparations
With the launch of World Supersport 300 in 2017, Vos saw potential to make that dream come true; setting up his own team and go racing in a world championship. “For me that championship couldn’t have been any more perfect. I actually wanted to start out last season, but KTM wasn’t ready to be competitive from the word go, and since KTM doesn’t do things without being fully prepared, we had to wait.” Fully prepared came with a name; the KTM RC 390 R. “The changes aren’t massive, but they’ll definitely help you maximize the fun on track. Despite the minor changes, it does take quite a bit of time and money to develop. That made the preparations a bit hectic for us.”

The past weeks have been tough on Vos and his brother, who also had to run the store in the meanwhile. “It was pretty much impossible to combine the two, so I’ll be glad when the first two races are behind us. Then we can finally take a breather, since things should be running well by then. Unfortunately, we’ve been desperate for time lately, since parts were coming in very late in the preseason.” Though the start wasn’t as hoped, KTM Fortron Racing Team showed its prowess in the first two tests at Aragon. The KTM RC 390 R wasn’t at battle strength just yet, but showed great promise as they were already quite well in the mix. Boost in confidence
All three riders went on to warn the competition they weren’t there to fool around; they were going to be a force to be reckoned with. All three Dutch riders in the KTM Fortron Racing Team came from the KTM RC CUP, which is a big advantage. The basic bike is the same, so they’re very familiar with the machinery. Glenn van Straalen earns the title of being the first rider, as he managed to secure the CUP the last two seasons of running. The 17-year-old from the province of Noord-Holland is also the only one in the KTM Fortron Racing Team that has a little experience in World Supersport 300. “Last year I had a wildcard at Assen. Because the KTM lacked homologation, I ran a Honda CBR500. That bike couldn’t have been any more different from my KTM, so it took some time getting used to. Then I went down in FP1, leaving me with little training time to get accustomed. I only managed to qualify 16th , but in the race I made up a few places here and there. As the leading pack started to fall apart, I picked them off bit by bit. Going into the last lap, I’d found a comfortable position with the leaders and in the end I could secure a podium position.”

That second place meant a serious boost in confidence for Van Straalen, setting him up successfully for the rest of the 2017 season. Besides winning the KTM RC CUP, he also went on to become the Dutch Supersport 600-champ. Though he’d shown what he was capable of on a bigger bike, he chose to go to World Supersport 300 deliberately. “Weight and size-wise I’m more suited for a 600, but I know I can do better in the 300 Championship. I’ve been racing the KTM RC 390 for three seasons now; I know the bike inside out. Plus, I get to race a lot of different tracks I haven’t raced at yet, and Supersport 300 is a great class to get to know those circuits.” 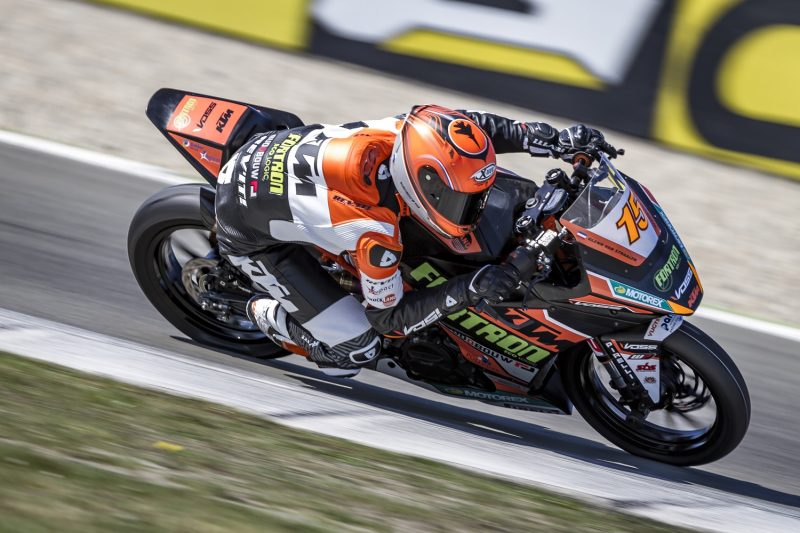 Important point
Though he’s the oldest rider in the team at age 23, and is experienced to boot, Koen Meuffels has an even bigger – pun intended – advantage in hand. Meuffels is a phone salesman from Someren (Noord-Brabant) and comes in at 1.60m, weighing a mere 48 kilos; you could say he is made for the KTM RC 390 R. “Yeah, that is really going to help me out in this class. I fit perfectly behind the fairing; anything that sticks out really slows you down, because you don’t have the power to compensate.” The urge to show his talent has only grown over the past years, mostly because of a tough period in 2015 and 2016. “I was forced to throw out two seasons in Dutch Supersport 600 because of epilepsy. I wasn’t allowed to race. So when I was declared fit, I chose the KTM RC 390 Cup. It felt like a step back at first, coming from a 600, but I’m glad I did. Now I’m getting a chance to mix it up in a world championship, which would’ve been so much harder to do on a 600.”

His rookie season in World Supersport 300 is an important point in Meuffels’ career. The results he pulls out of the hat in those eight races will direct his future in motorsports. “It’s now or never,” the KTM rider notes. “If I’m not satisfied with my season coming to the end of September when we finish at Magny-Cours, I’m quitting the racing game for good. I might help young riders instead, but I won’t be racing myself. The goal has always been to race in a world championship, and I’ve accomplished that now. I want to show what I’m capable of, but if that is not enough, then I have to be honest to myself. However, should I do well – which I expect – then I hope to take a step up a class. Though another season in World Supersport 300 might not be a bad idea. Just depends on what I come across.” 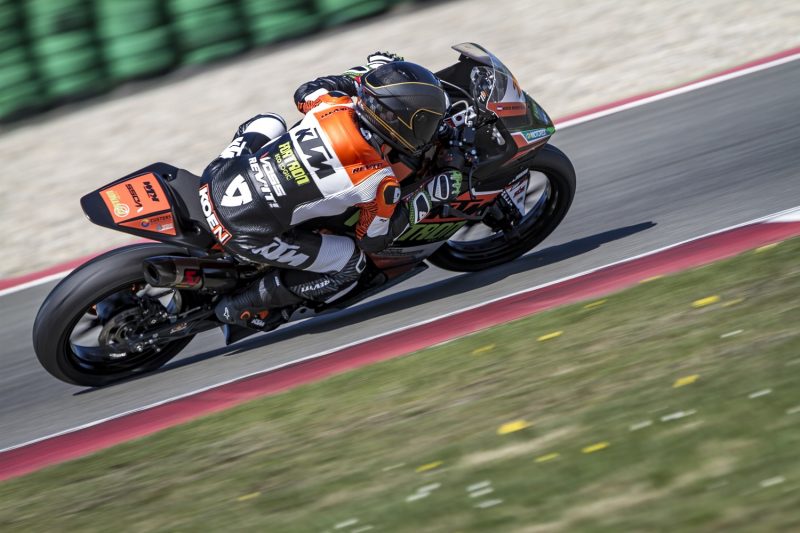 Genetically fast
The third rider in the team didn’t get the Vos moniker by chance, since Ryan Vos is Arie Vos’ nephew. Contrary to his two compatriots, eighteen-year-old Vos isn’t as experienced by far. The only experience in racing for Ryan Vos have been the past two seasons in the KTM RC CUP. It does show he’s genetically fast, because he got the results to show for it. Taking big steps and learning fast, the Dutchman worked his way forward in those two years. “I’ve had so much to thank my father and my uncle for ever since I started out racing. They’ve been helping me out wherever they can. I know I’m not too experienced just yet, but my uncle said I’d be up to it taking the next step. That’s why I’m confident I’ll do well in the world championship. I still have a lot to learn, but I have two experienced teammates to learn it from, too. And then there’s my uncle, who gives me tips and tricks at a constant. I hope I can repay his faith in me with results this season!” 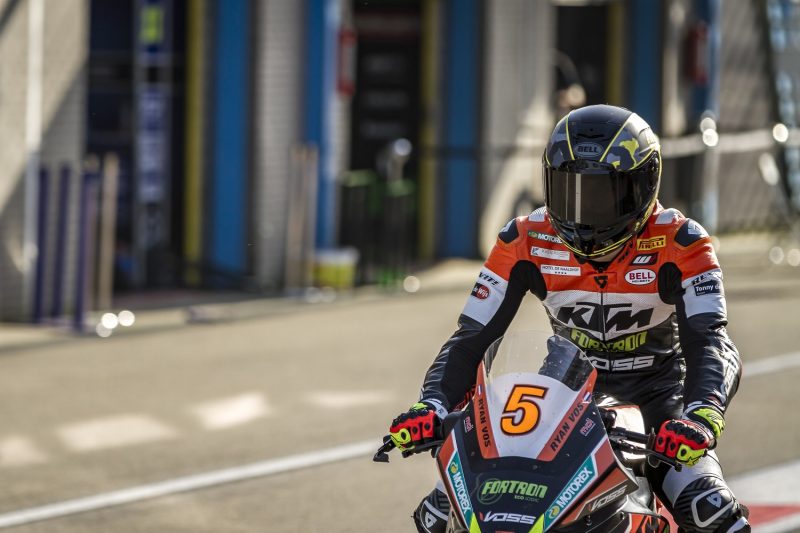 With distinction
Looks like the KTM RC 390 R is in the right hands, because the KTM Fortron Racing Team took their maiden win first time out. Koen Meuffels won the first World Supersport 300 race at Aragon with distinction. “It’s very special to take KTM’s first win in the championship,” Meuffels notes a day after lifting the trophy. “I needed a good start, and I managed that. Once I found myself in the front pack, I waited and pulled it out of the bag on the last lap. That panned out exactly as I’d planned, because I needed to be the third rider going onto the final straight. I reckoned slipstreaming those two would give me enough of an edge to take to the front on the line. I’m not sure the same trick should work again, because it’s all really close. You really need to keep something in store for when the time comes. If you can manage that, you can win.” 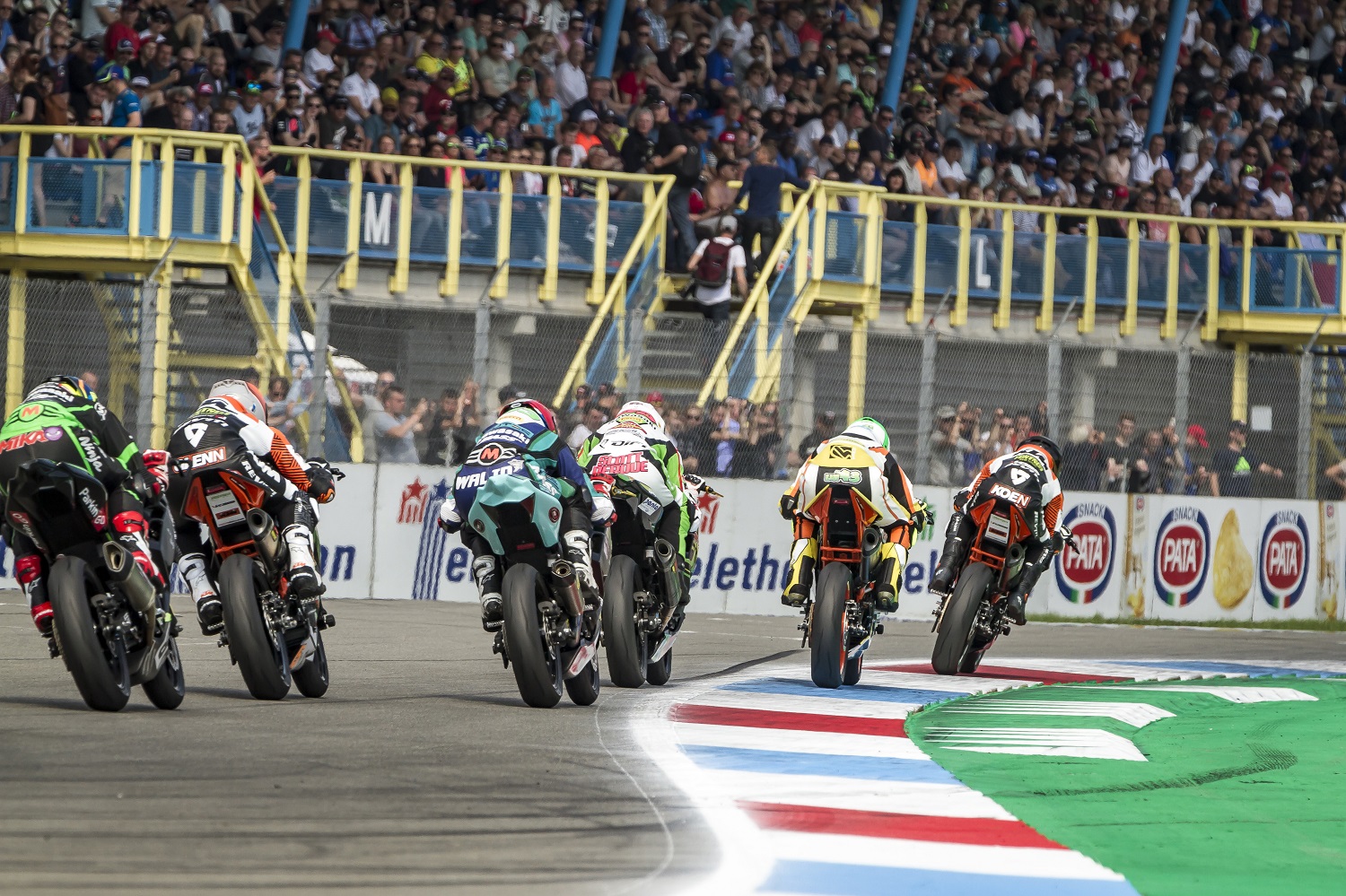 “It’s a dream come true,” the proud team manager said. “It’s been so hectic, getting ready for the season, but this makes it all worthwhile. That’s how you do! We showed what the KTM RC 390 R can do and it’s a great big thank you to KTM. They’ve put in so much hard work to prepare the bike for the world championship. Hard work pays off, and that’s great!”

Not just Meuffels gave it his all, Van Straalen was also right there when it mattered. In the closing stages he only just fell short to get on the rostrum, finishing 7th. Ryan Vos unfortunately crashed out, but all three KTM riders have shown they’re not in World Supersport 300 by accident. A hopeful start only fuels the need for more orange success. Is there more champagne of victory to come for the KTM Fortron Racing Team? Arie Vos: “Each and every rider in the leading group can win a race. Right now we have two riders that can take on the best. It’s impossible to tell whether or not they can make that assumption come true right now, but they’ve got a fighting chance. That’s for sure.”