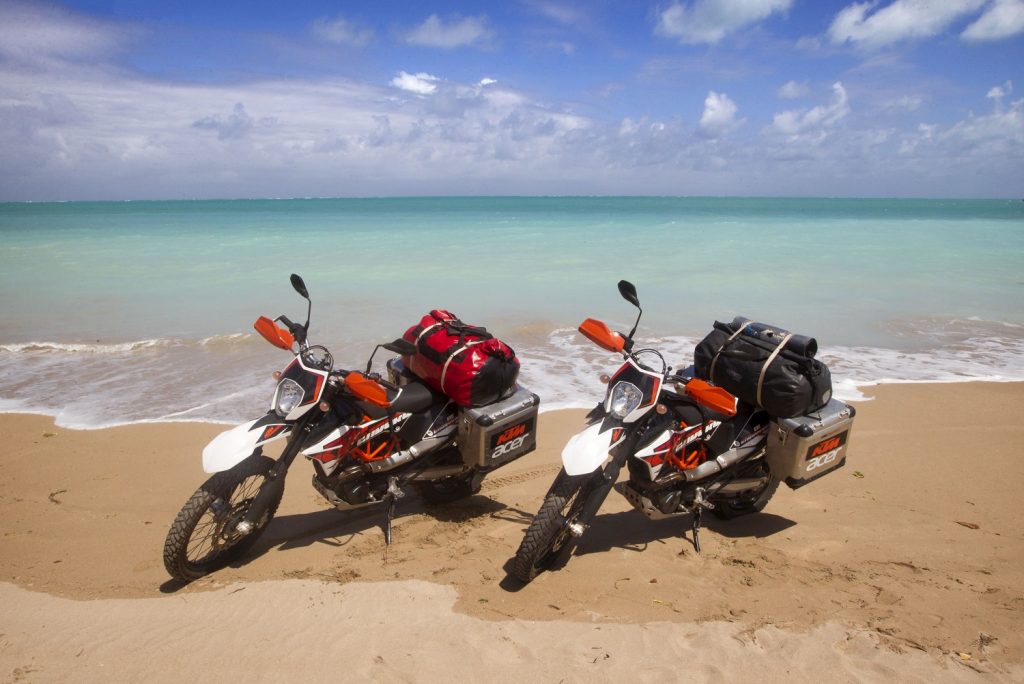 From the rising dust clouds of hundreds of rhythmically stamping Indian feet during a ritual campfire to a monstrous, metropolis of skyscrapers: Brazil is gigantic and hard for us to comprehend its contradictions and diversity. In addition, its natural beauty is endless with the Amazon Rainforest, 8000 km of pristine coastline and the 220 waterfalls of Foz do Iguaçu. The country leaves an indelible impression.

It is pure joy to be able to ride on our KTM 690 ENDURO Rs again after a few days. What great machines! Extremely light and viable, but also real power beasts. So wonderful you almost forget about the bike because it’s obvious they can handle all surfaces effortlessly and with heavy packing and luggage. 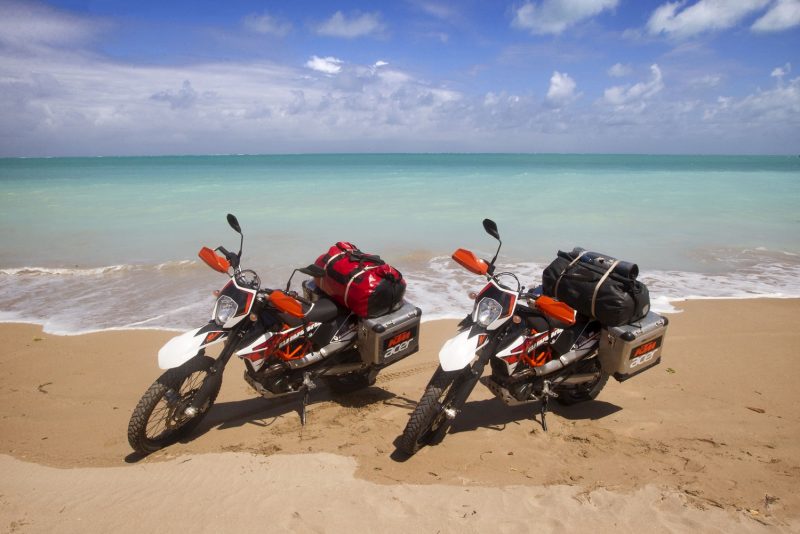 The plan in the first phase of our trip is to have lunch in Olinda’s historic center. According to the travel guide, it is one of the most beautiful and well-preserved colonial cities in Brazil and was in Dutch hands in the 17th century. It is indeed stunning. From a nearby high point green Olinda lies in the foreground and in the background is the coast and skyline of modern Recife.

On our way again our plan is to arrive at Chapada Diamantina in a few days; one of the most beautiful natural parks in the country. The following day will be a long ride to put as many kilometers as possible on the counter. We pass through rolling green hills of sugarcane and a winding coastal route through the Atlantic rainforest to Salvador; known as the city that invented ‘capoeira’ 400 years ago by the Afro-Brazilian slaves. Nowadays it is still a city where everything is about music and dance. We try the local specialty acarajé (fried beans with shrimp balls) but do not love it. Unlike the purple açai ice cream! 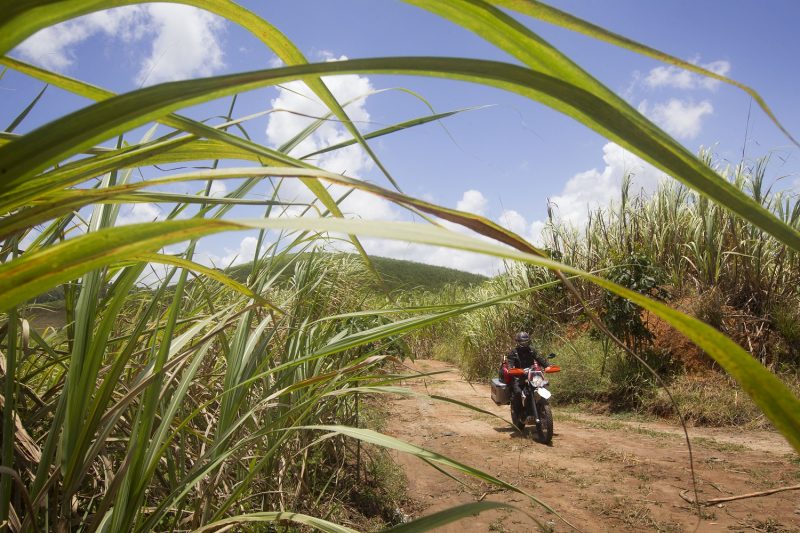 Chapada Diamantina is a 400 km ride which we bridge in one day. We book a tour consisting of: climbing a mountain top, scrambling between rocks and river beds, and taking a cave trip where we snorkel in clear blue water in the pitch dark. It’s gorgeous. Here alone you could stay for weeks and do countless walks. However, we are moving on to beachtown Caraíva, from where the Pataxó Indians can be reached. 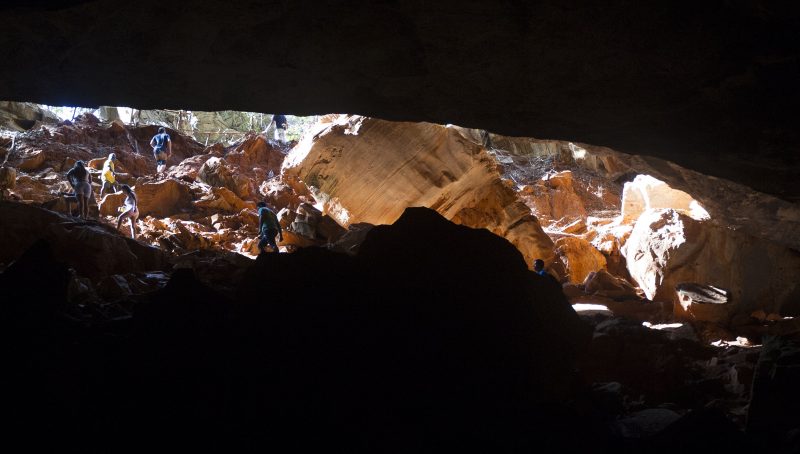 The evening sets in as we ride on a narrow sand path over small hills to the beach village Caraíva. The hills keep on following each other and the path becomes steeper and narrower. Just as I wonder if we are heading in the right direction, I see a hand-crafted signpost that takes away my doubt. In the dark I change from city beam to high beam continuously. The hard red sand changes to a loose, white type of terrain; fortunately, very manageable for our orange ‘sand masters’. After 40 km, we end up in a parking lot where we have to leave our KTMs to cross a river in a small boat, to go where no motor vehicles are allowed: Caraíva.

Thanks to Leandro, who we meet in our hostel, we get in touch with the Pataxó Indians. We stay with them for dinner and the evening and watch a ritual campfire. With painted faces and bodies, clothed in wicker skirts and headdresses, the Pataxó dance rhythmically around the fire: an unforgettable experience. 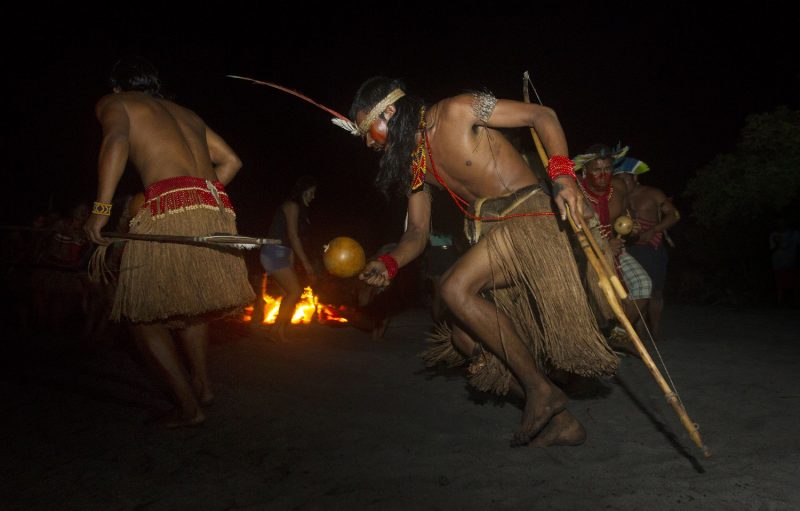 Moving on we leave the sandy roads behind us and exchanged them for six-lane highways. We visit three major cities: Rio de Janeiro, São Paulo and Curitiba. With exactly 10,000 km on the counter, we ride to Rio and return directly to modern day Brazil. Rio has a lot to offer for sightseeing, culture and nightlife. Of course, we also visit the 38-meter-high Jesus statue, we attend a football match at the Maracanã Stadium, one of the largest in the world, and we walk across the famous beaches of Copacabana and Ipanema. 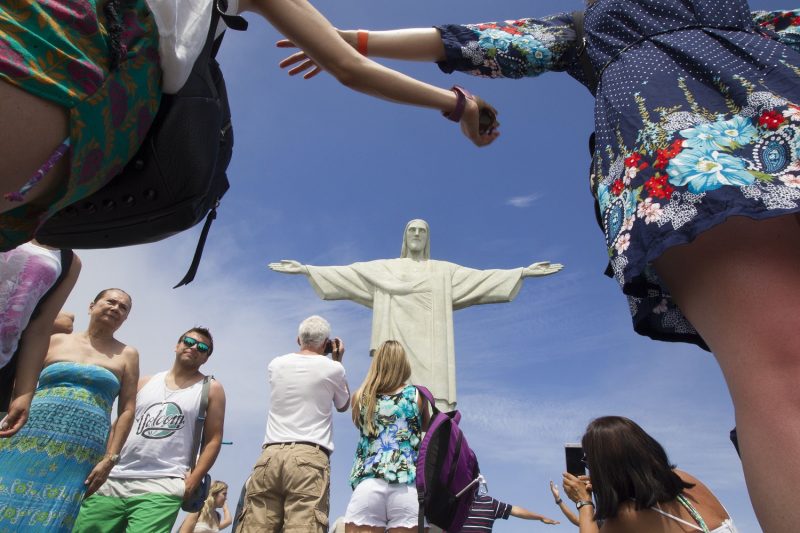 Endless skyscrapers form the new view as we ride into São Paulo. With 22 million people, this metropolis alone exceeds the population of The Netherlands. It reminds us of New York. We visit some museums and walk through a city park which looks like the jungle version of Central Park. 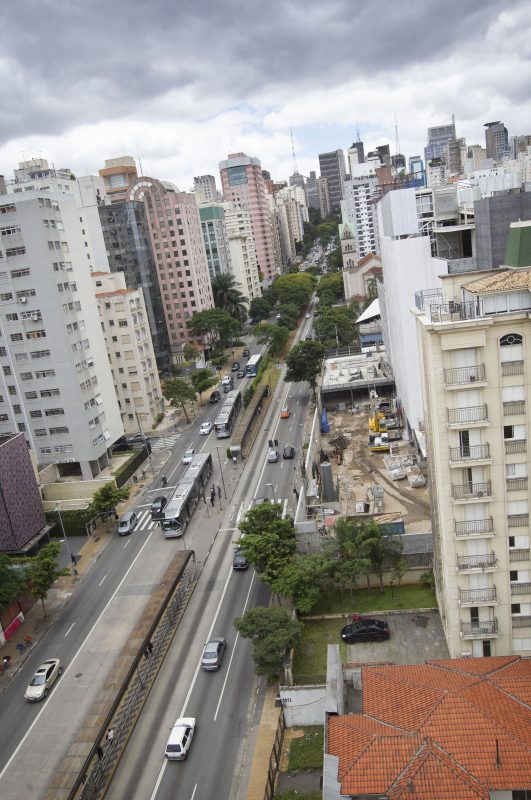 Curitiba is a completely different story. It is called the ‘rock city’ of Brazil and it´s obvious by watching the people. Many tattoos, beards, piercings and band shirts. If you ever visit Curitiba, do go to the exceptional Oscar Niemeyer museum. An incredible special building with a varied, interesting art collection. We stay for a few days in this city, so I can make a report about some of the cleaners from the favelas (slums).

Before crossing the border at nature world wonder Foz do Iguaçu, I am keen to go to Serro do Rio do Rastro. One of the most beautiful mountain roads in the world. Fortunately, we start the ride without rain, unlike the last few days. But suddenly the whole mountain crest disappears in a dense fog. Just when I am ready to photograph Lia on a nice bend. After waiting for an hour, I get a little hopeless and we decide to go on. As soon as we leave the mountain pass, the sun on the other side is gently emerging, and the veil of fog is gradually opening up in some places. We turn around and go back. We wait a little longer, and the fog disappears completely. What luck! Lia rides up and down several times, and the possibilities for great photos are endless. 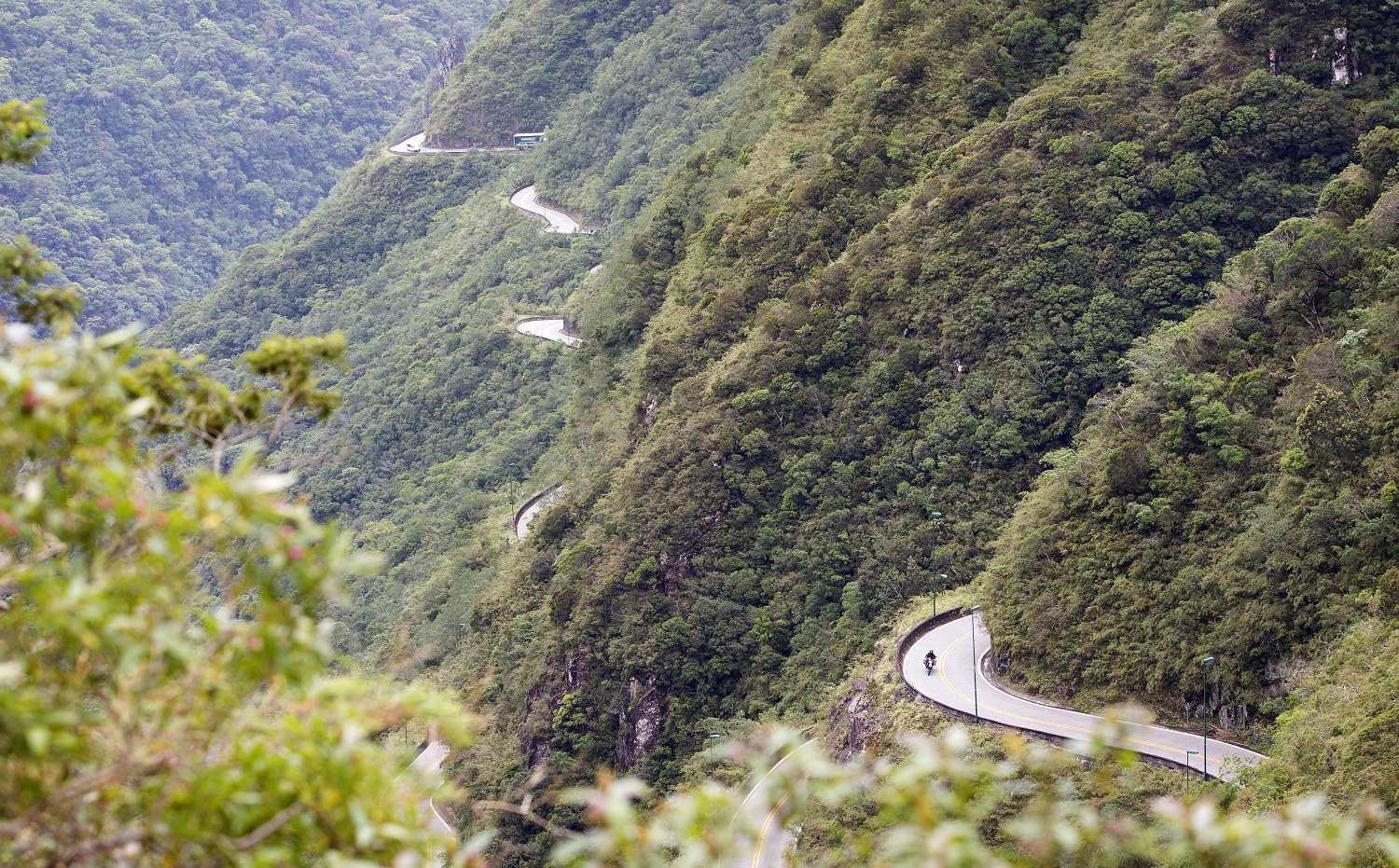 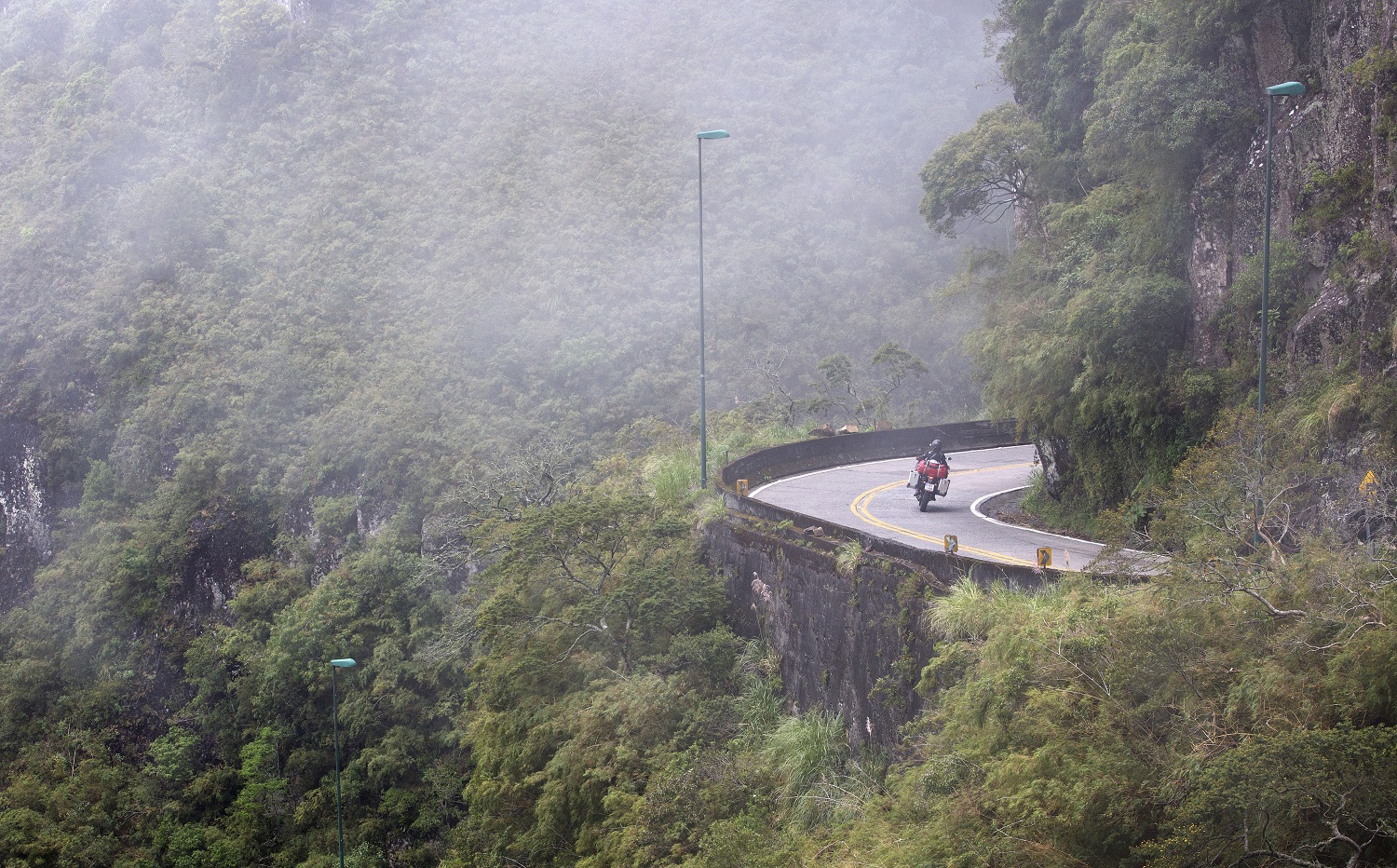 Next we’re heading to Foz do Iguaçu, which lays partly in Brazil and partly in Argentina. The fastest way to get to the Brazilian section is via Argentina. How typical, every time you cross a border, you immediately notice the difference in the roads, nature and population. According to the GPS we should arrive at our destination at a quarter past six. Suddenly, however, the gray asphalt turns into red sand with rocks and stones. Undeniably idyllic between untouched green, but my first thought is that this would be an awful place to get a flat tire. I pass a police station, noticeably relieved that the offroad part in Argentina is behind us. But where is Lia? She was not that far behind me, was she? I wait a little longer, before I turn around. Soon I see her again and unbelievable: she has a puncture.

At the police station, four men help us to take the front wheel off our bike, to change the inner tube. Easier said than done because after replacing the inner tube they do not succeed in getting the tire back on the wheel. After seven hours the wheel is finally put back on the motorcycle and we leave in the pitch dark for the final 30 kilometers to Foz do Iguaçu. Where we arrive at half past midnight: 6.5 hours later than planned! 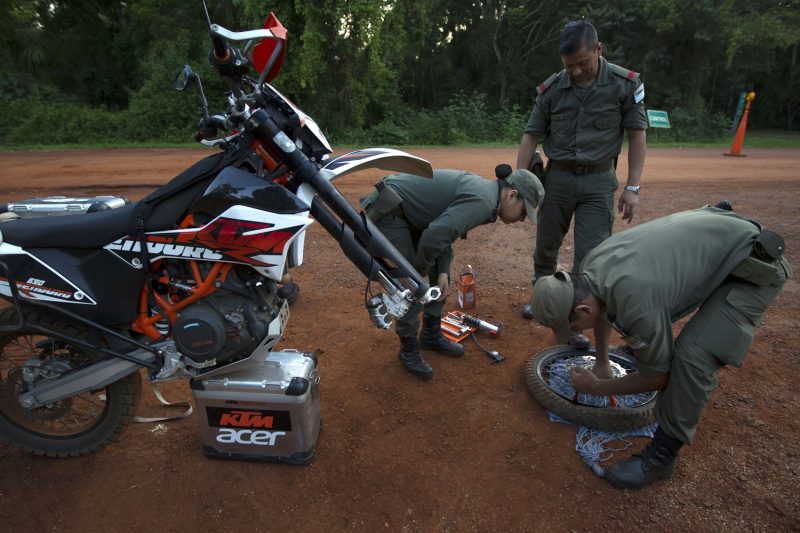 The next morning we enjoy the 220 waterfalls; a natural phenomenon. We decide to also watch it from above during a helicopter flight. An outstanding view, which actually passes too fast in 10 minutes to fully take it in. We save the Argentinian side for the next day and it is amazing in a completely different way. We want to see, feel and experience them in addition to the overwhelming overview from above. Our wish is granted. During a boat trip the waterfalls splatter over us and leave us with thoroughly soaked. 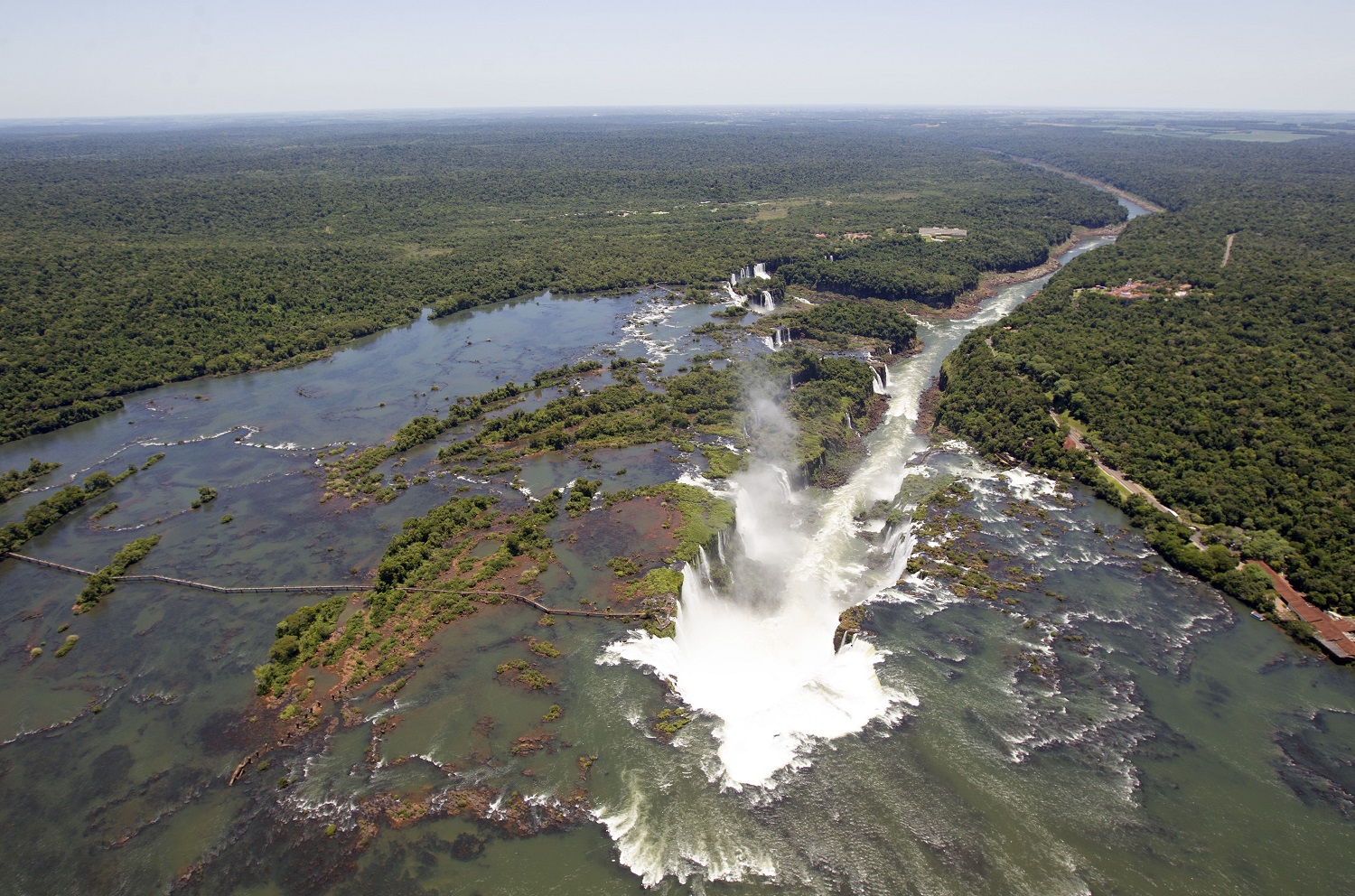 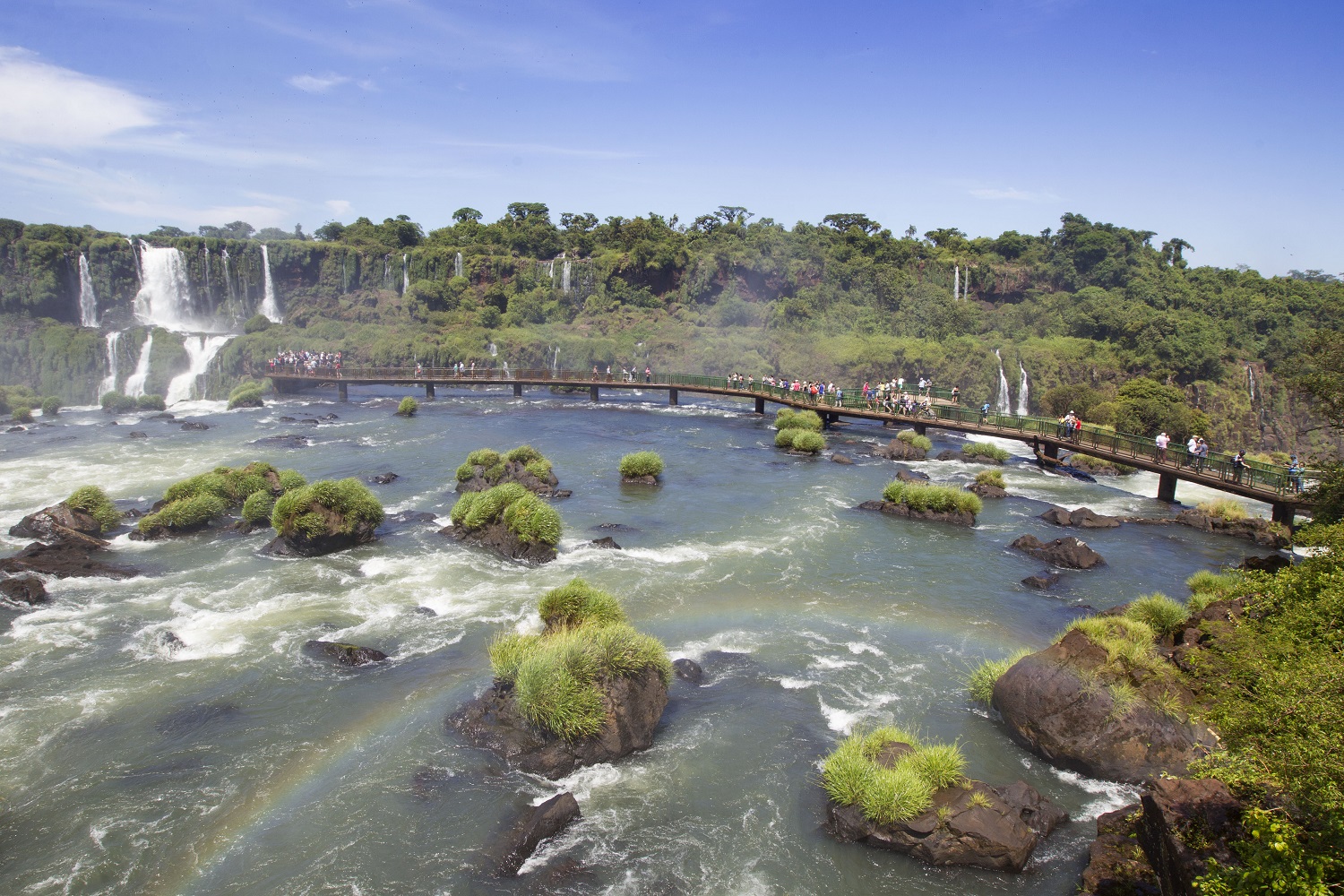 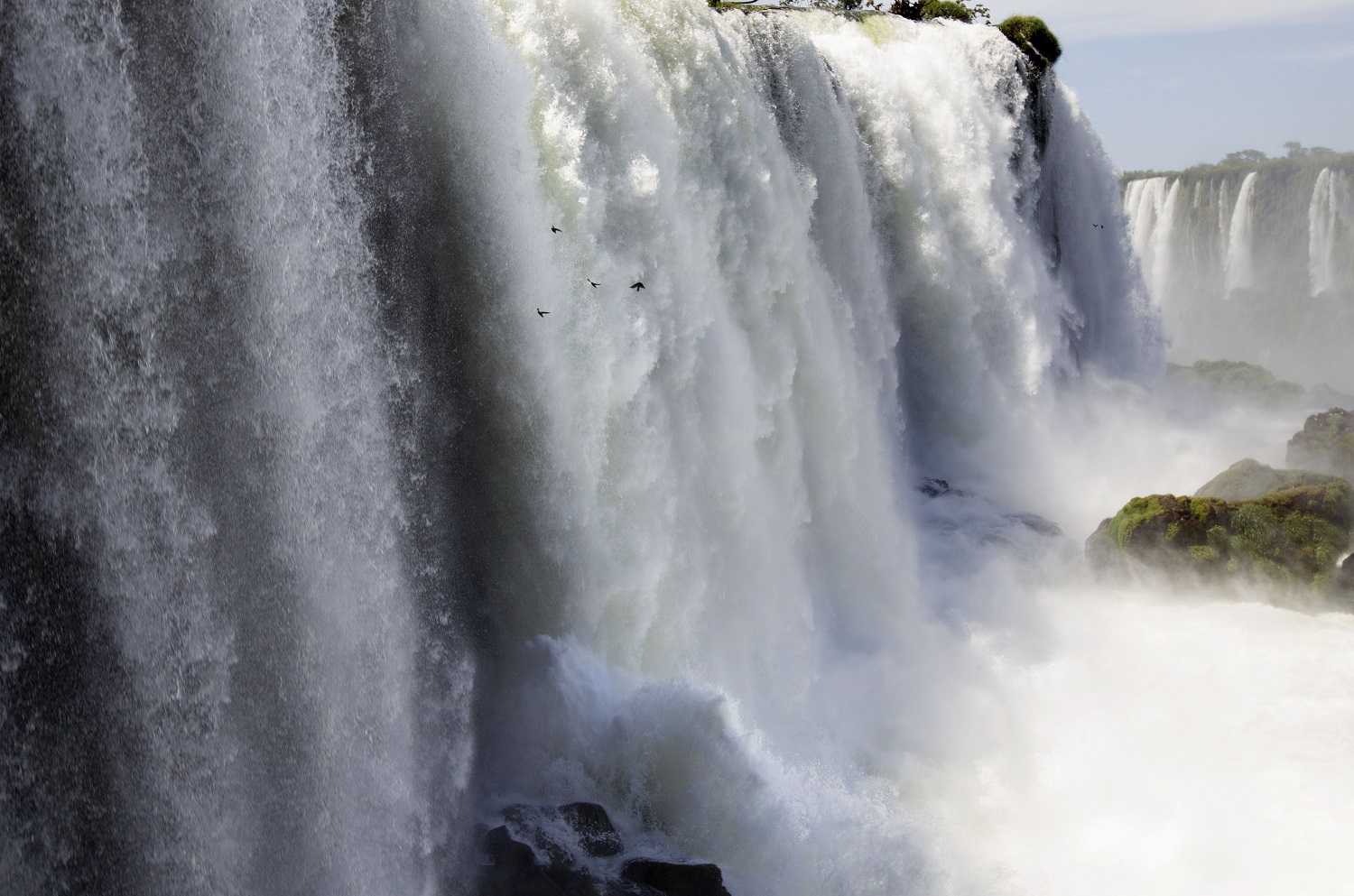 We do not stay longer than one day in Argentina before we cross the border to Uruguay. After three days we arrive in Montevideo, where the next project is waiting for us: a report about a special prison. In addition, this is also the place where the fantastic part of the trip with Lia comes to an end and the second part of the great adventure will start with and for Carli!

In Curitiba there is something that draws my attention: the poor people from the slums that collect high stacks of waste in large carts in the city center. Men and women, from young to old; I see them as ‘the heroes of the street’, because instead of stealing they work extremely hard for very little money. Like Amauri, a 22 year old, who has been doing this work all his life. He toils six days a week from morning till evening and his full car weighs about 80 kilos. For one kilo of paper he gets paid 0.08 euros, for one kilo of plastic 0.10 euros and for one kilo of aluminum 0.80 euros. Afterwards I decide to give the people who have collaborated with me a small amount of money as a token of my gratitude from our projects of The Riding Reporters Foundation. I give each of them 50 reales, which amounts to 13 euros; a single lunch. A mere pittance in the Netherlands but in Brazil it is worth much more. I loved 49-year-old Jocélie Riviera’s reaction: initially she does not even want to accept the money, but in the end she does and is very grateful for it. I’m touched that nowadays you can still make people happy with such a small gesture. 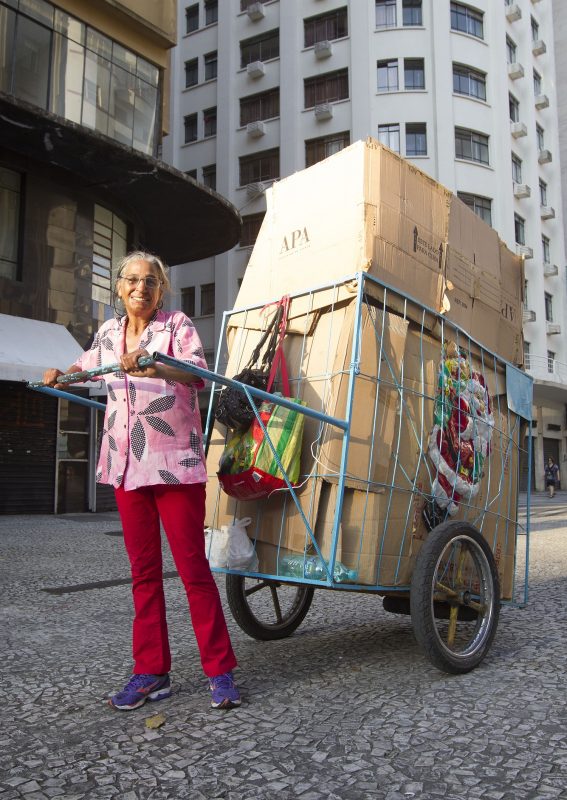 184 Responses to The Riding Reporters #2