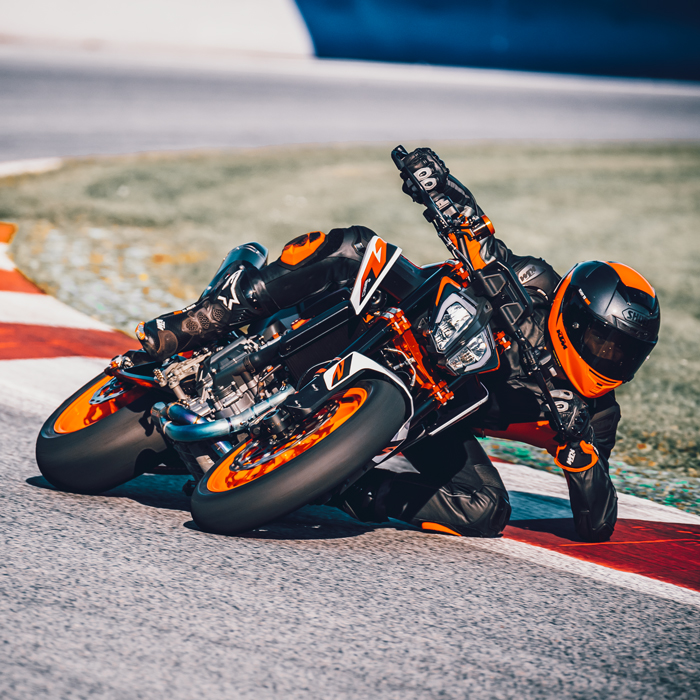 There is a degree of intrigue about the 2020 KTM 890 DUKE R: a fresh, rasping entrant to the manufacturer’s virulent Naked bike portfolio. So, we enlisted the help of Street Product Manager Adriaan Sinke to explain some of the ‘reasons for being’.

After an enticing unveil at the 2019 EICMA show last November, the fanfare surrounding the official presentation of the 2020 KTM 890 DUKE R was then mostly digital. Europe’s spring ‘shutdown’ meant the first ‘taste’ of the motorcycle was filtered online and through YouTube in late March: it was an odd situation for a bike that promises such a visceral riding experience. 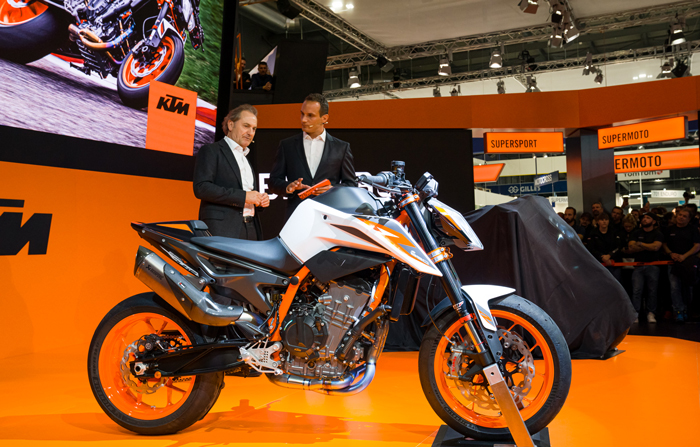 The KTM 890 DUKE R has been designed with priorities of ‘sensation’ and ‘exhilaration’ at the forefront. But how did it originate in the minds of KTM R&D staff? And how did they strive to create something that was different to the thrill already provided by the other Naked bikes in the line-up (specifically the KTM 790 DUKE and KTM 1290 SUPER DUKE R)?

With the KTM 1290 SUPER DUKE R, KTM quenched the thirst for torque and crafted a bike as strong for the road as it is on the track. With the KTM 790 DUKE the firm aimed for agility, light weight and power. Models such as the KTM 390 and KTM 125 DUKEs again blend optimal handling with fierce motors and enhanced practicality for different groups of motorcyclists.

“We are always looking at the performance-end of the scale,” Sinke states. “A KTM 790 DUKE is a great bike, and one of sportiest in the midrange, but like in racing, there is always room for improvement. There is obviously quite a gap between a KTM 790 DUKE and a KTM 1290 SUPER DUKE R, so part of the decision [to make the KTM 890 DUKE R] was the wish to fill that gap. But much more important was the wish to deliver the highest performing bike in the midrange segment. Be it handling, suspension, engine or electronics, the KTM 890 DUKE R tops them all.” 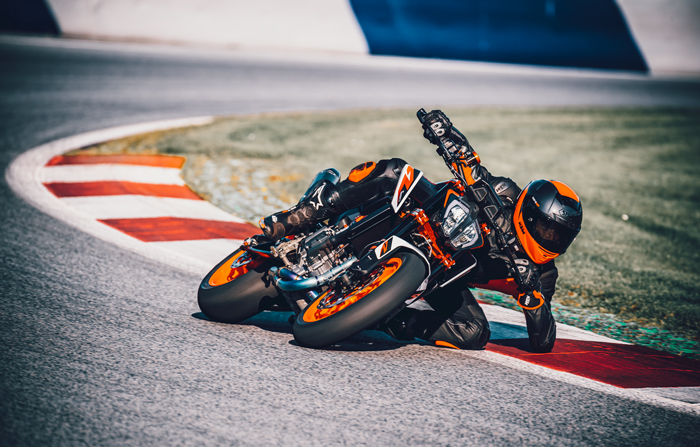 The KTM 790 DUKE’s characteristics were defined enough for the bike to be labelled ‘THE SCALPEL’. The KTM 890 DUKE R’s appearance represents an attempt to make another slice at the motorcycling market. In a style true to KTM’s alternative values and philosophy, the KTM 890 DUKE R charges in, exhaust ablaze. “The midrange segment is very big, especially in Europe and spans a very wide range of models,” explains Sinke. “KTM always wants to offer the sharpest tool in the segment and is not necessarily aimed at the middle of the segment where the volume is, we create our own niche.”

“Potential competitors would be a Triumph Street Triple RS, an MV Agusta Brutale, maybe a Kawasaki Z900 or a Yamaha MT-10: we trump all those bikes on individual points and all of them with our overall package of handling, torque, power and electronics.”

So, the KTM 890 DUKE R is not a ‘suped-up 790’. How have KTM gone about reinventing the best parts and fabricating something new? Well, the parallel twin platform is vaguely similar, but increased bore and stroke, higher compression and a higher maximum RPM mean a hike to 121 HP and 99 Nm: 15 more horsepower. A new cylinder head, new camshaft and new balancer shafts all help to deal with the boosted revs and rotating mass. 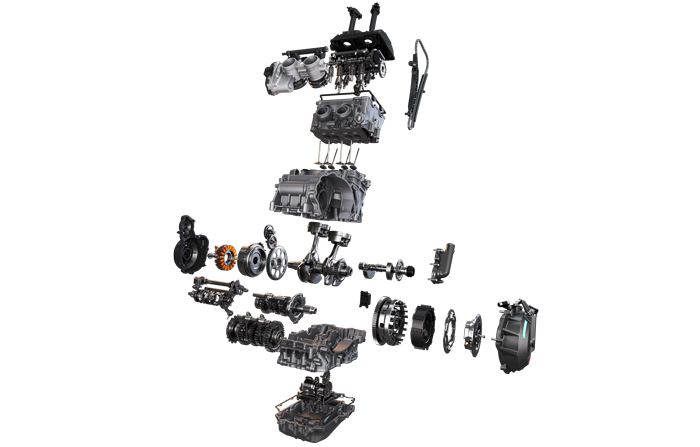 The chassis has been engineered to be sportier, more aggressive and lighter with altered ergonomics to suit the KTM 890 DUKE R’s role as a bike that will attack the twistiest of roads and the most inviting circuit layouts. The ride is smoothened by adjustable linear spring WP APEX front forks with split function damping, compression and rebound settings, and to counter all of that extra potency the new KTM relies on the latest Brembo Stylema monoblock calipers with 320mm floating front disks. These and more differences to the KTM 790 DUKE only increase the distinction of the KTM 890 DUKE R.

The special orange frame of the KTM 890 DUKE R will be bouncing off shiny showroom floors by the time this story hits the KTM Blog. But will the 2020 emergence of the motorcycle cause any ripples in the overall DUKE family catalogue? The KTM 1290 SUPER DUKE R reached a third-generation model in 2020 with the best iteration of ‘THE BEAST’ yet and the KTM 790 DUKE already ruffled middleweight feathers since it appeared almost two years ago. KTM may claim that they have taken ‘all the things we love about the KTM 790 DUKE and turned it up to 11’ but the KTM 890 DUKE R comes at a time when it can find its own path. For those riders optimistic of mining the full list of KTM’s PowerParts to make their KTM 790 DUKE reach the same ballpark of performance then disappointment lies in store.

“The KTM 890 DUKE R is much more than just a tune-up,” underlines Sinke. “The engine character with the different valve train and crankshaft is so different from the KTM 790 DUKE engine that the entire feeling of the motorcycle has changed. The differences to the chassis setup and brakes complete the feeling of being on a different bike altogether.”

“The upgrades we made on the suspension and brakes would not be easy to match,” he admits. “A power increase of more than 15 horsepower is very hard to reach and very expensive, especially when the bike has to remain street legal. And even if a talented tuner could reach our values putting it all together with the very advanced level of electronics – Cornering ABS, Cornering MTC and so on – in a functional package that make a bike that works on the street as well as it does on the track is not realistic.” 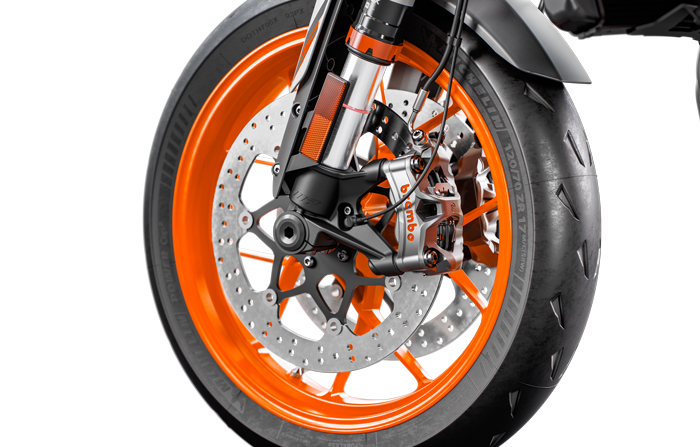 The KTM 890 DUKE R may not strike fear into a speed camera like a KTM 1290 SUPER DUKE R but this bike adds a whole new dimension of demand and necessity to KTM’s Naked bike line-up. Thus, leading onto…

Ultimately, why should KTM owners (or prospective owners) consider switching from a KTM 790 DUKE to the KTM 890 DUKE R? Or have their eyes pulled away from the peerless KTM 1290 SUPER DUKE R to rest on the new younger brother? By making such an impact with their two models at the top of the Naked bike sector KTM are placing the KTM 890 DUKE R in a competitive and ‘crowded’ space within its own family.

“Good question, it really depends on what you are looking for in an upgrade,” outlines Sinke. “Do you want absolute power and BEAST levels of torque? Get a KTM 1290 SUPER DUKE R. Do you want agility, precision, power to weight, compactness, and a lot of horsepower, torque and stopping power? Then now is the time to get an KTM 890 DUKE R.”

Not quite a BEAST but sharper and more lethal than a SCALPEL: looks like the KTM 890 DUKE R is a weapon regardless.