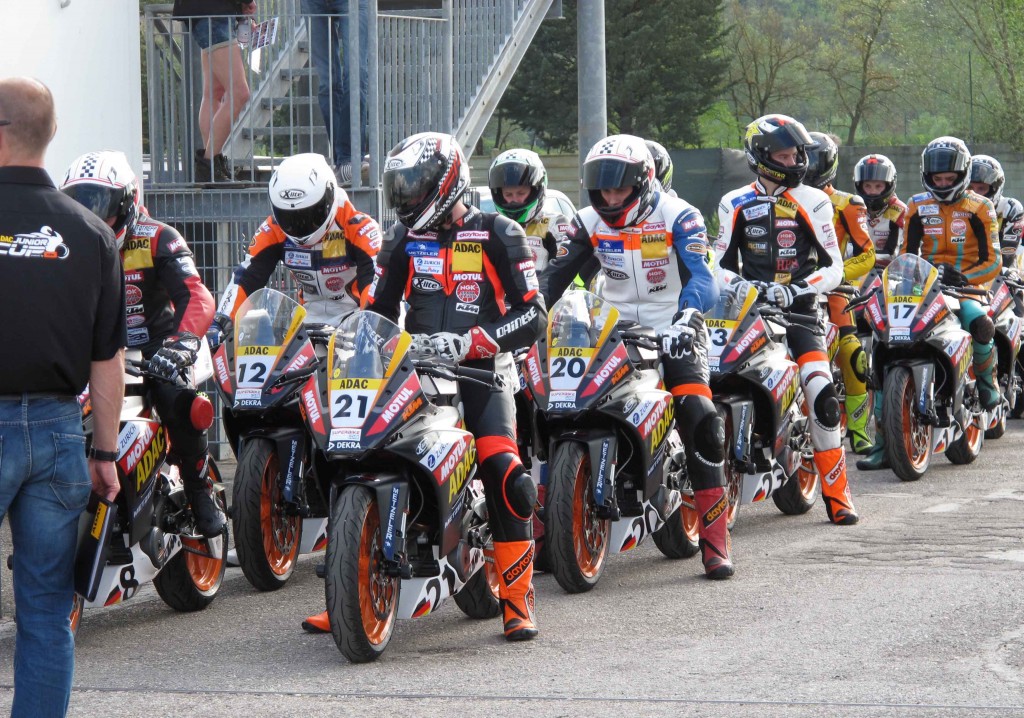 At the introduction course of the “ADAC Junior Cup powered by KTM” in Magione, Italy the brand-new KTM RC 390 Cup celebrated its debut. 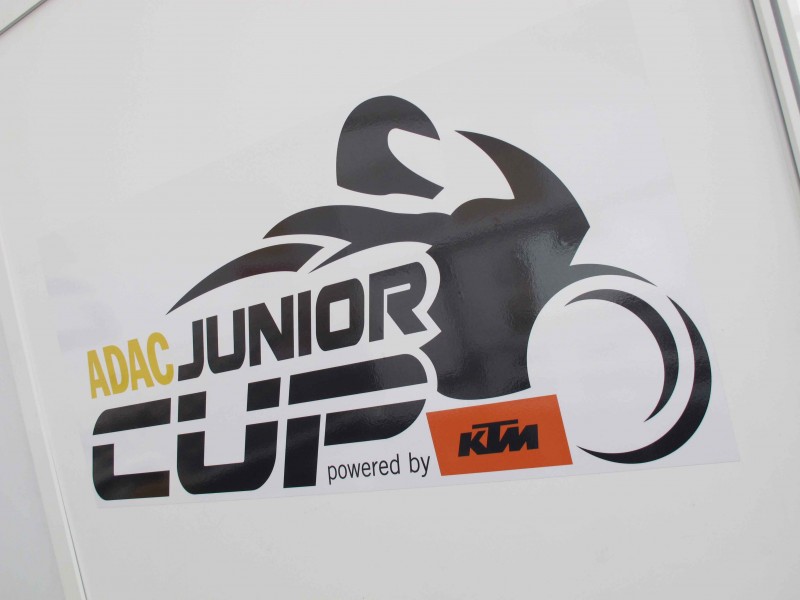 Auspicious signs welcome riders and host: perfect weather conditions for the 27 young race talents (26 boys and 1 girl) aged between 14 and 21 years at the Magione race track in Italy. All of them are keen to get into action with the brand-new KTM RC 390 Cup bike. The single cylinder offers nearly 40hp and around 180km/h. The handling of the bike is perfect and thus easy to ride thanks to rider-friendly and high-torque four stroke-power. A real fun bike to ride.

The bike is equipped with a bigger front brake disc (from 280 to 320mm), a WP fork and a WP fork leg, which is also used for the Red Bull MotoGP Rookies Cup. The ADAC and KTM staff takes care of the young racers and their bikes. A four-day introduction course stuffed with activities: bike distribution, theoretical instructions concerning riding technique, vexillology and the right behavior off and on the race track, as well as an intensive training for the team technicians. 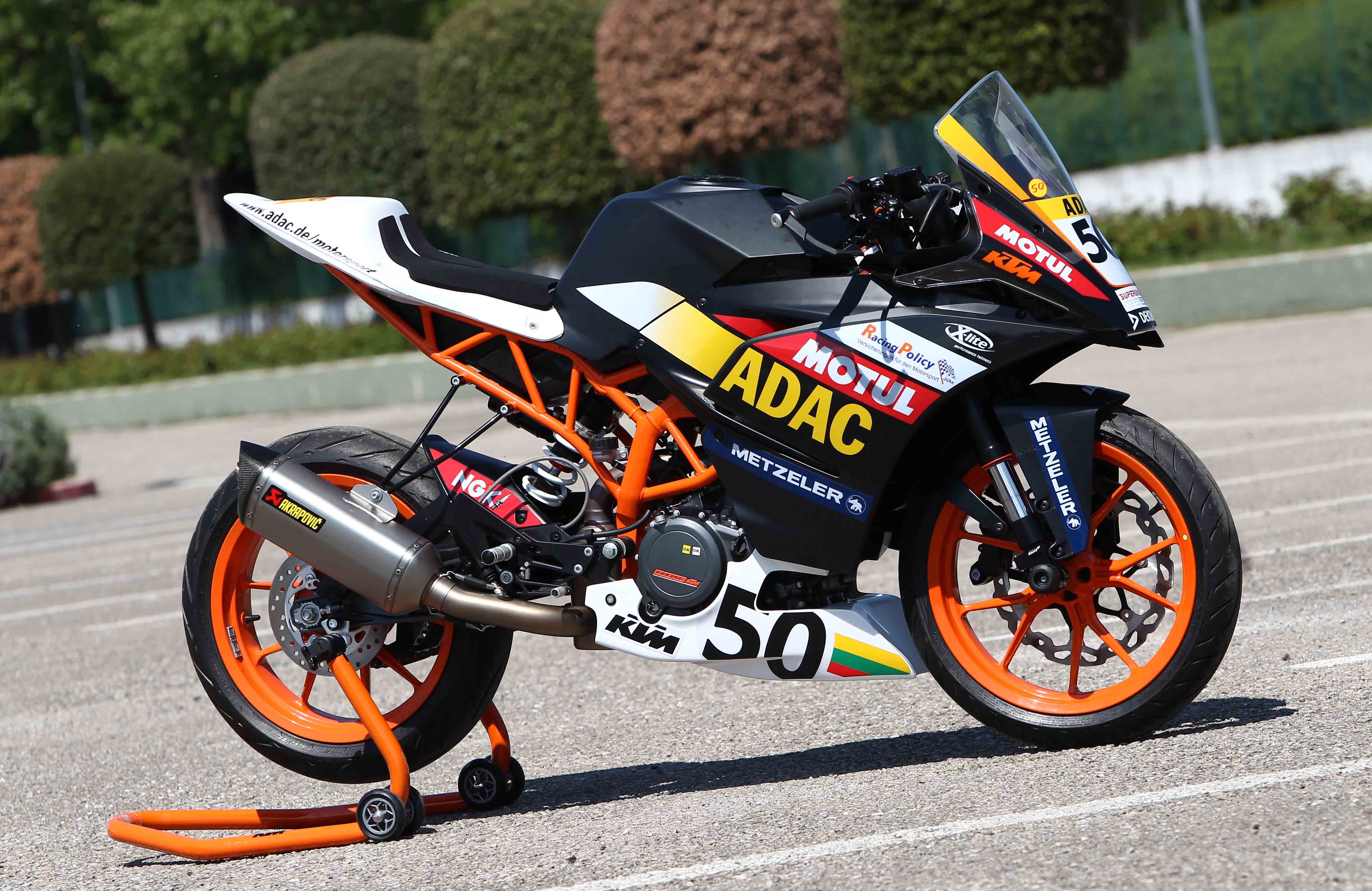 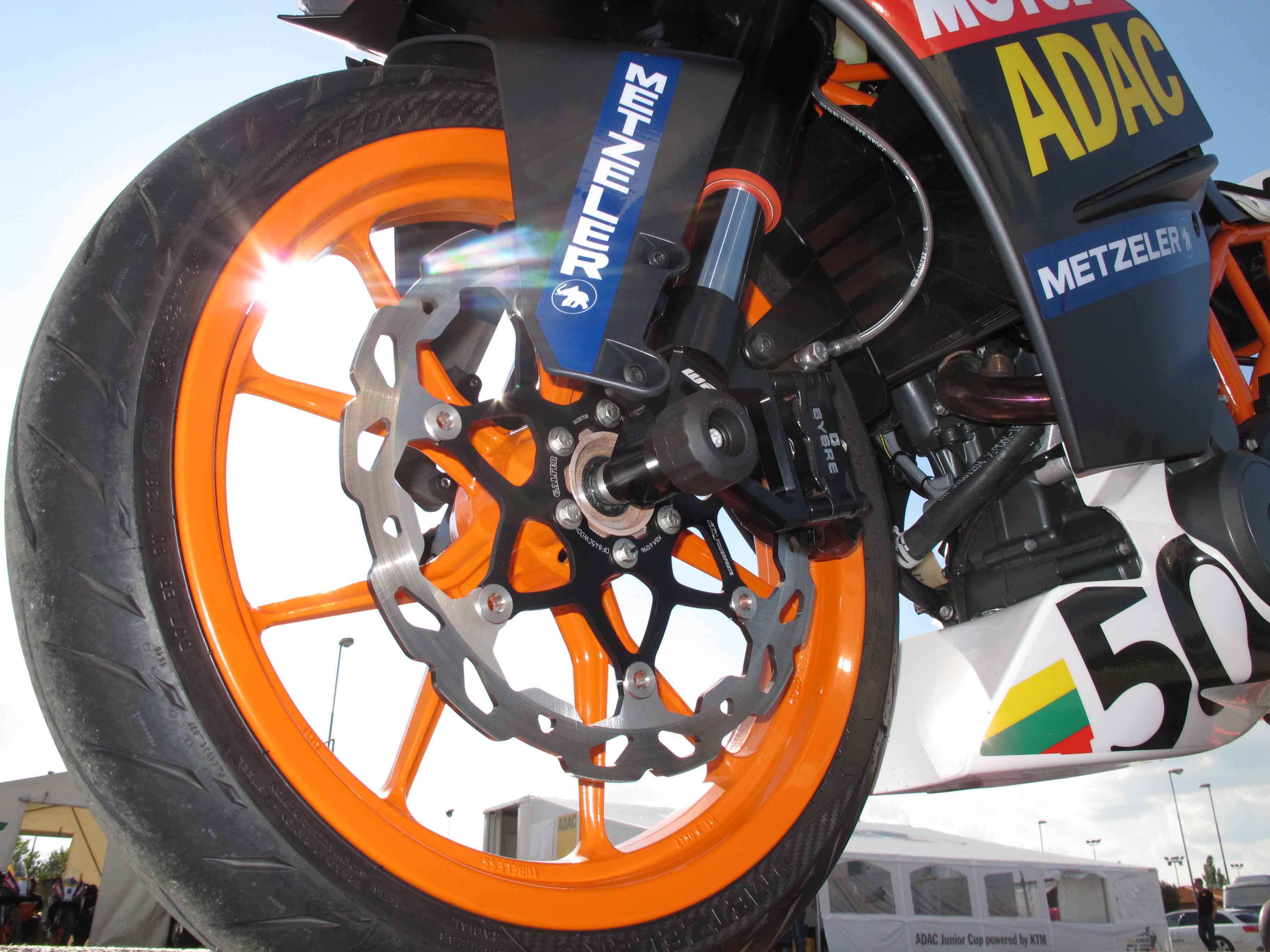 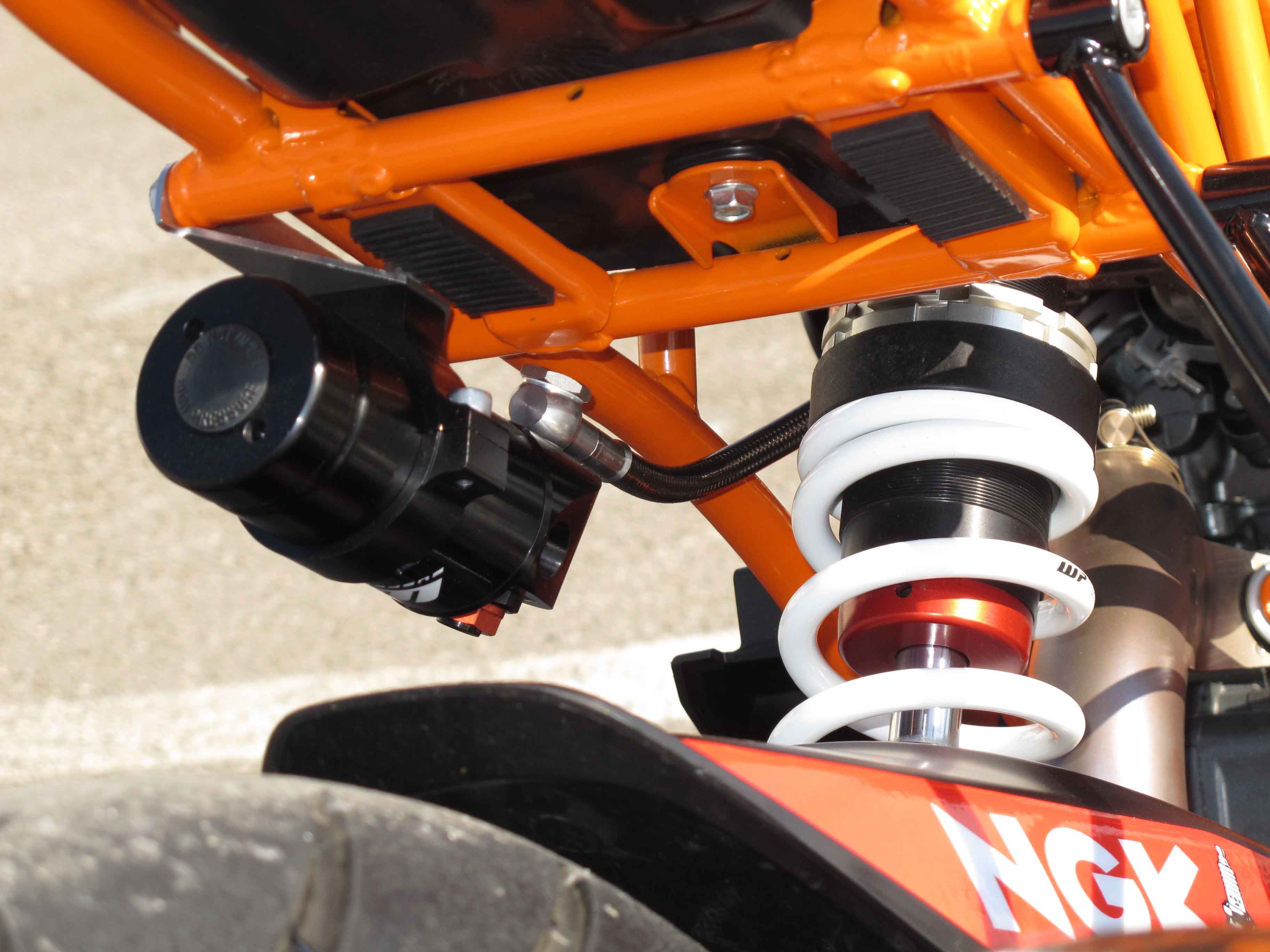 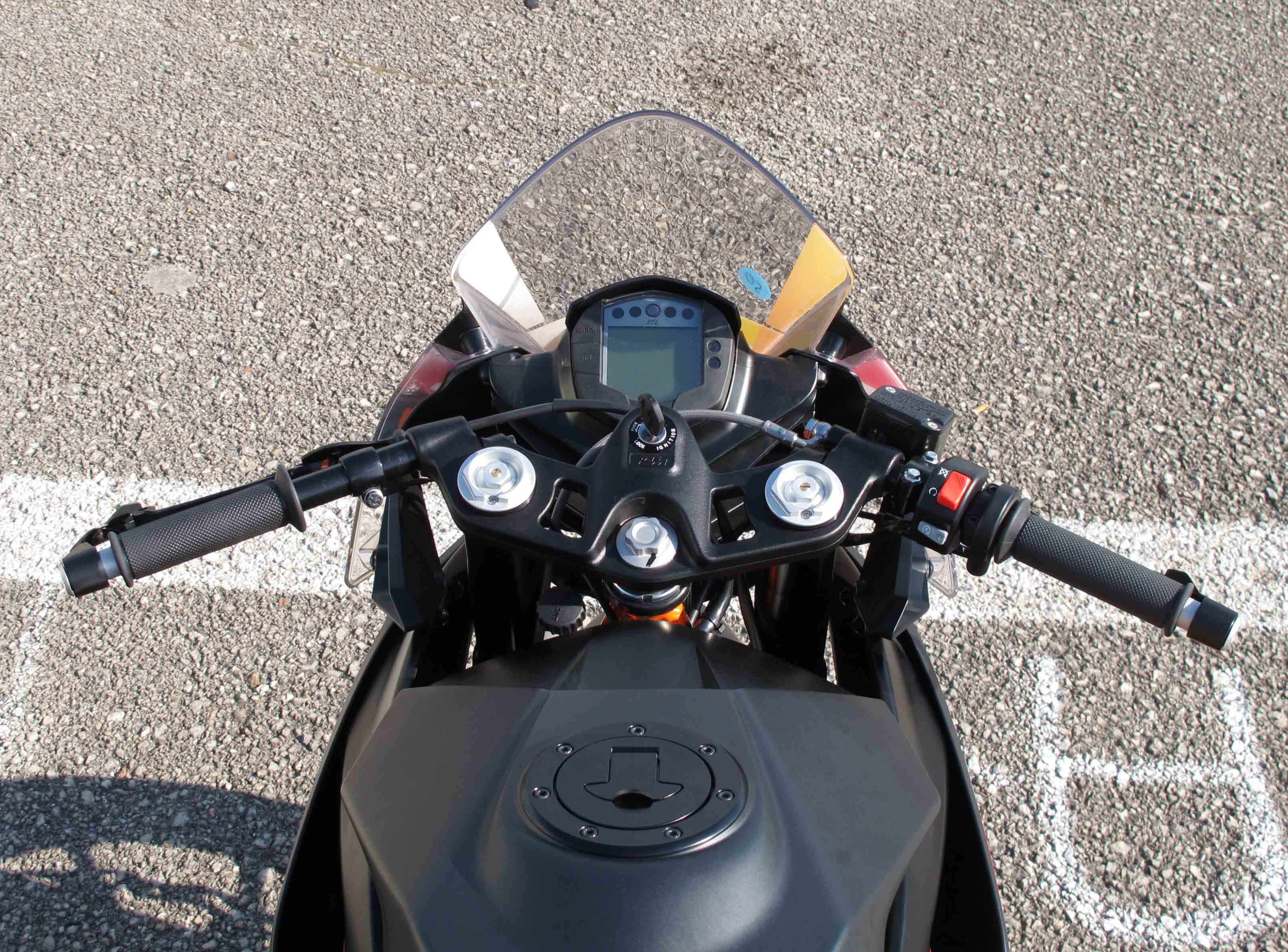 It’s a three days experience of riding and the youngsters make the most of it. The instructors on the race track are the IDM Superbike racers Dario Giuseppetti and Michael Ranseder. The two of them are also riding a RC 390 Cup and guide groups of five young riders to show them the racing line and have a look at the young talents in action. Back in the pits the youngsters are provided with valuable tips and advice. A better and more practice-oriented training is inconceivable. Some time ago, Giuseppetti and Ranseder started their racing careers in the ADAC Junior Cup and are in this with much blood, sweat and tears. 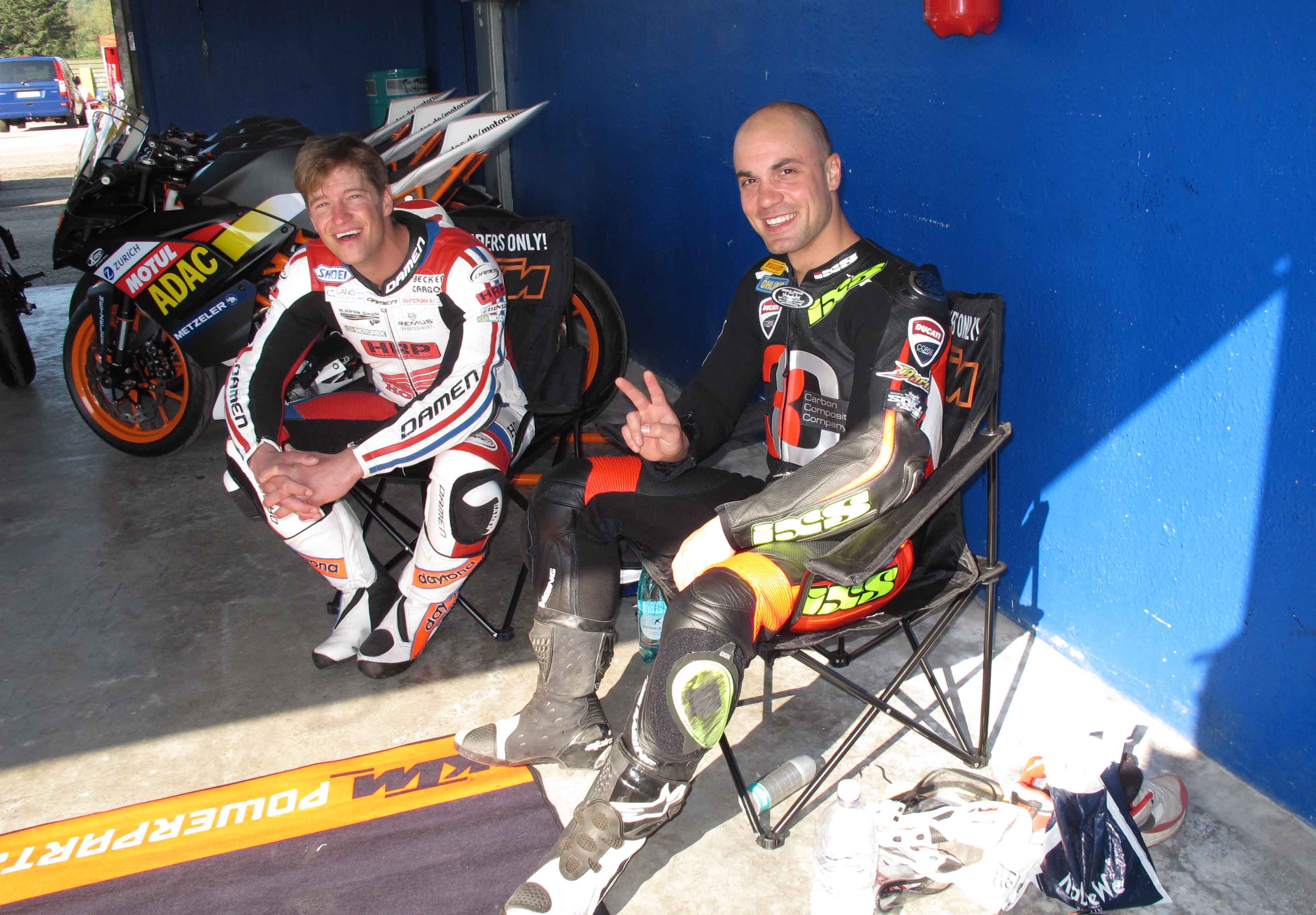 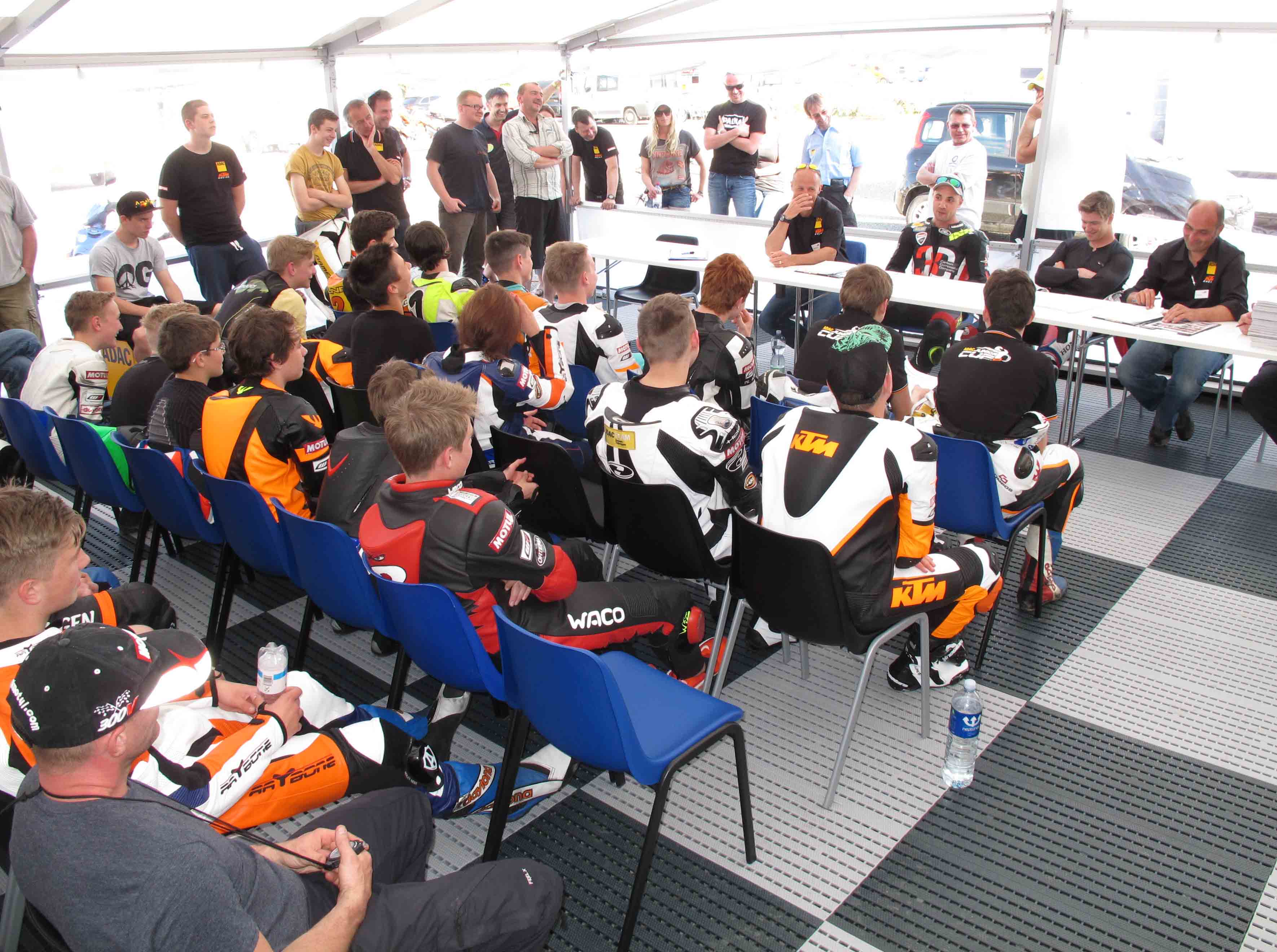 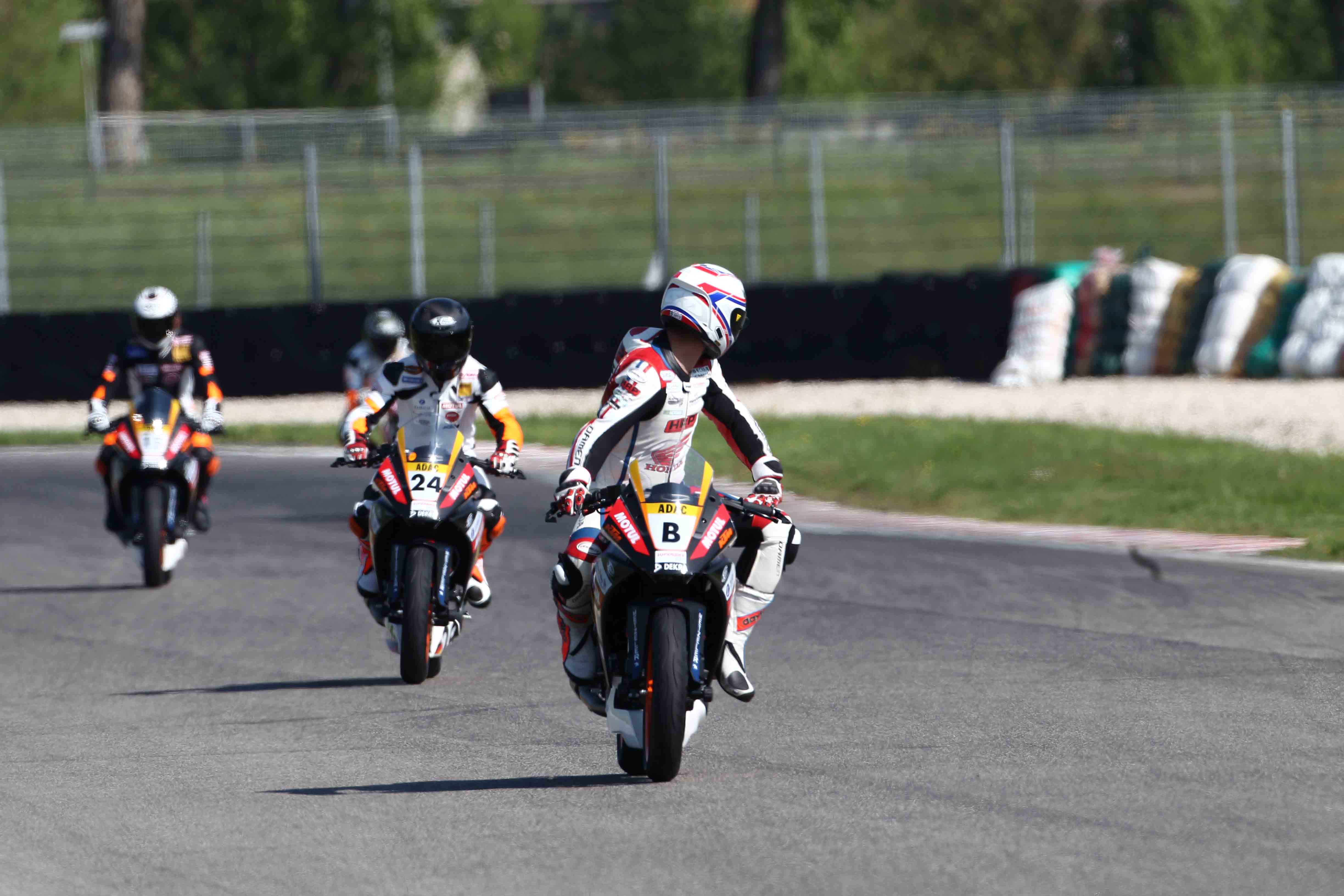 The RC 390 Cup bikes were built and prepared at the KTM factory in Mattighofen. All riders and teams are supplied with a box containing the redundant production parts, just in case they want to ride the bike on public roads or sell it on to another motorcyclist. Mounted are Metzeler Sportec tyres of the brand-new specification M7, the successor to the M5. All Cup participants also obtain lubricants package from Motul, team clothing, workstands, a carpet-underlay and much more.

All bikes are uniformly painted and labelled, however the participants are easy to distinguish, since the rider equipment and the design of the leathers and helmets can be chosen according to the slogan: Do as you please! A Nolan advisor is on-site and provides the young racers with helmets. He is accompanied by Katja Poensgen, who started her career in the ADAC Junior Cup as well and is the only female racer that captured points in a 250cc championship race. 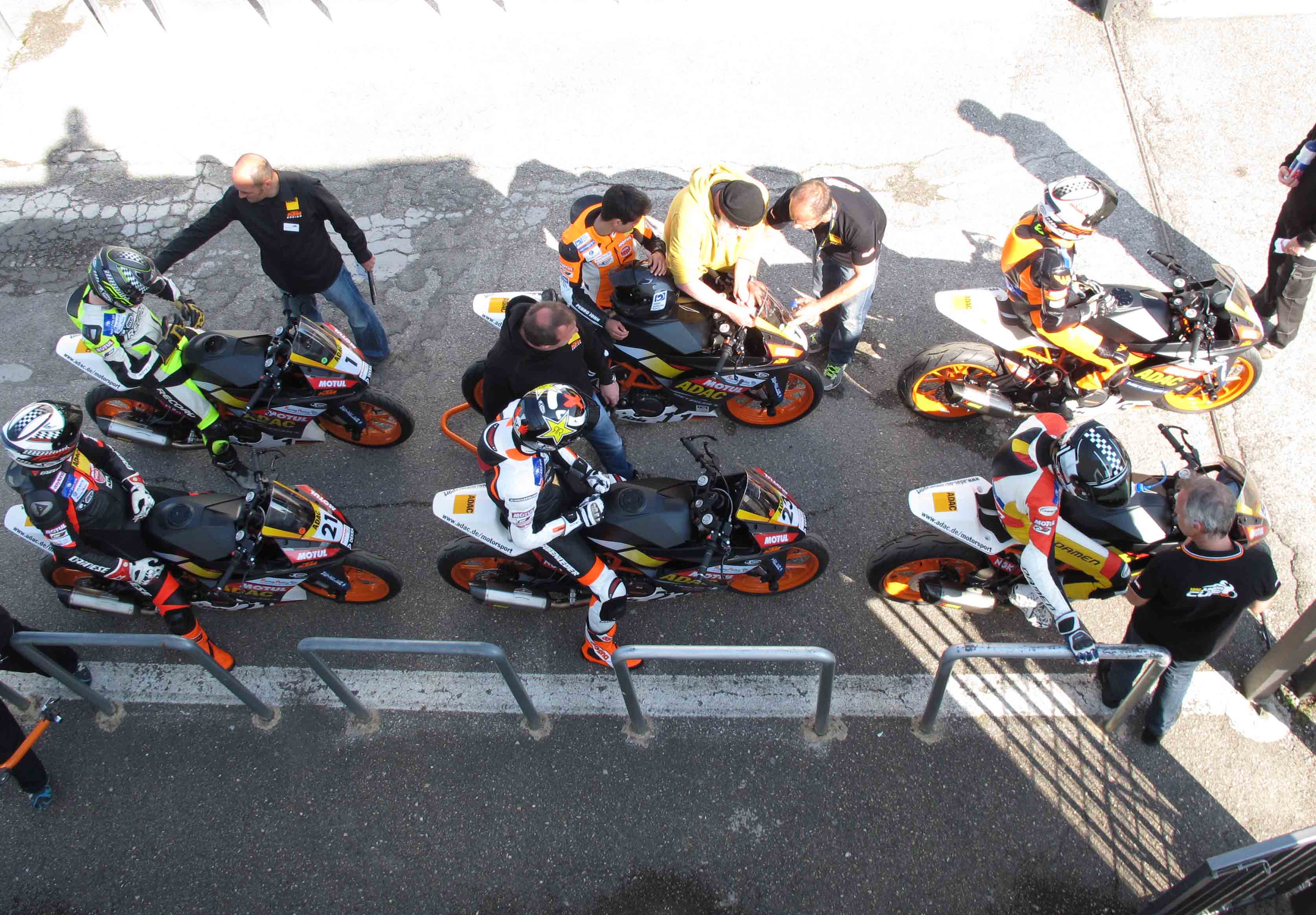 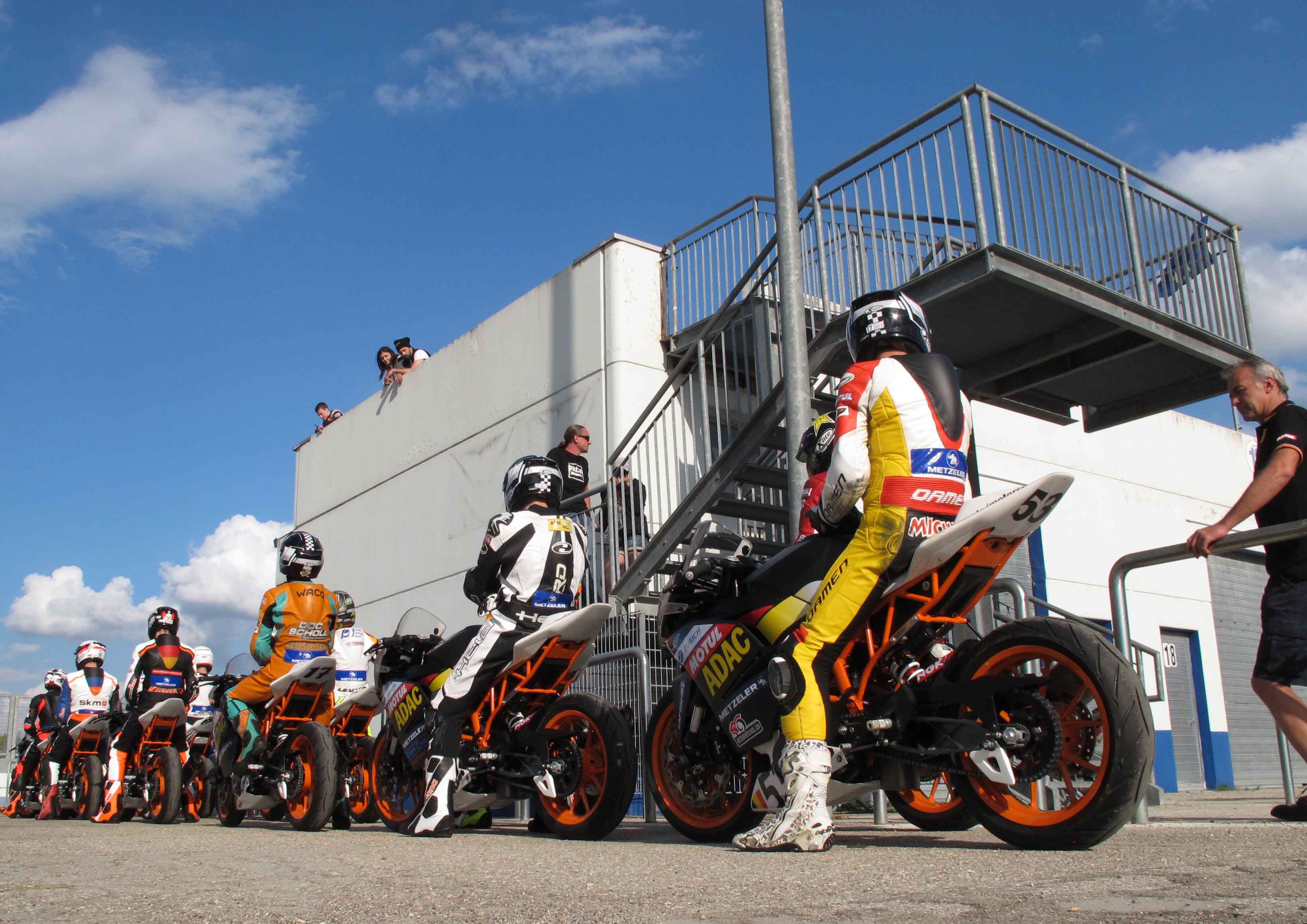 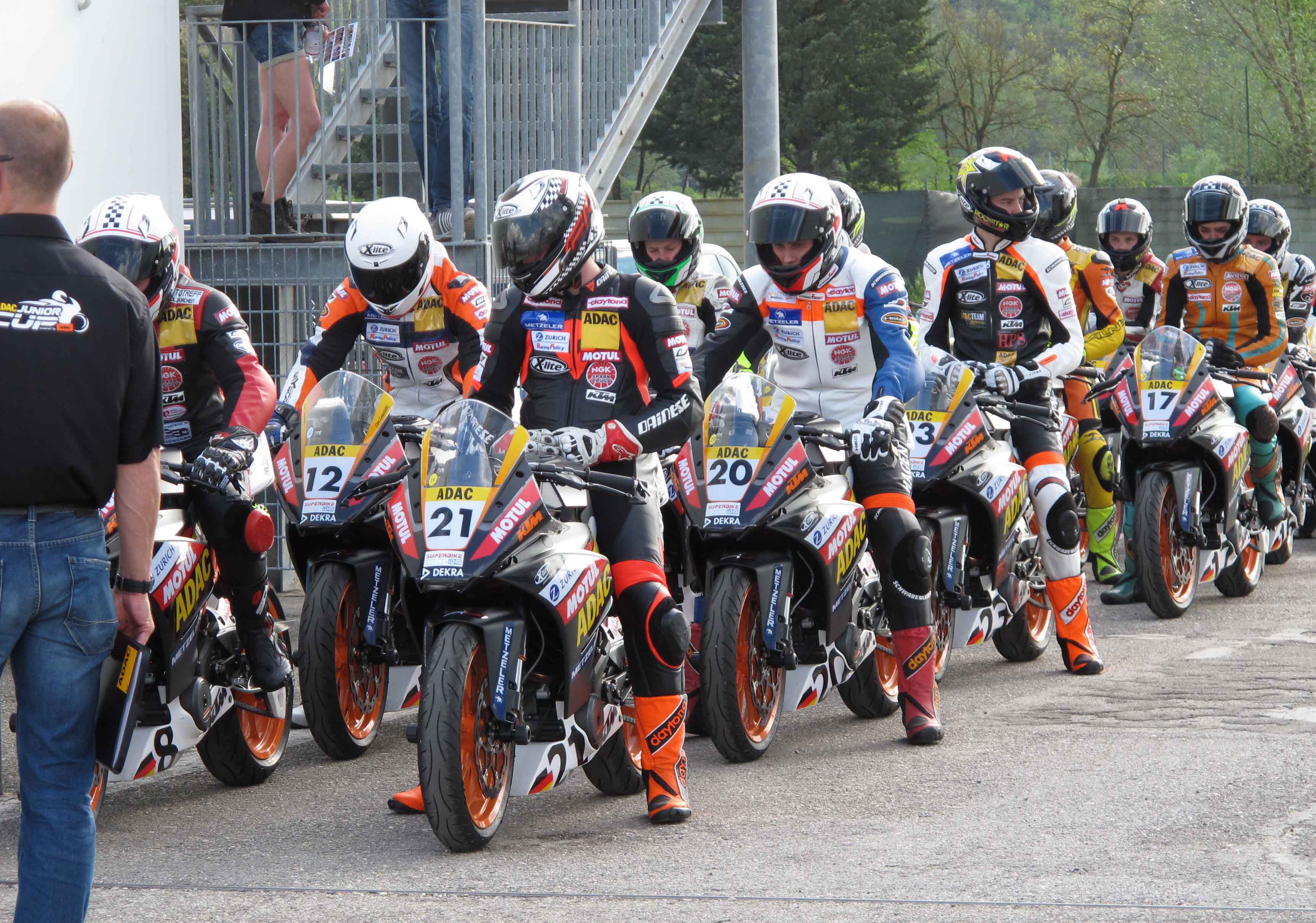 After three days of learning and accustoming there are only two weeks left until the first race of the “ADAC Junior Cup powered by KTM” at the Lausitzring. Another seven races will follow: in Oschersleben, at the Nürburgring, Assen, Hockenheim and Schleiz. The undoubted season highlight will definitively be the race within the programme of the MotoGP held at Sachsenring.

After more than 20 years of Junior Cup history the “ADAC Junior Cup powered by KTM” will be the first Cup in Germany that will be staged with a four-stroke bike. It is quite possible that, in the upcoming years, other KTM brand cups will be hold in other countries, following the German example. Countries like England, Italy and Asia have already indicated their interest. 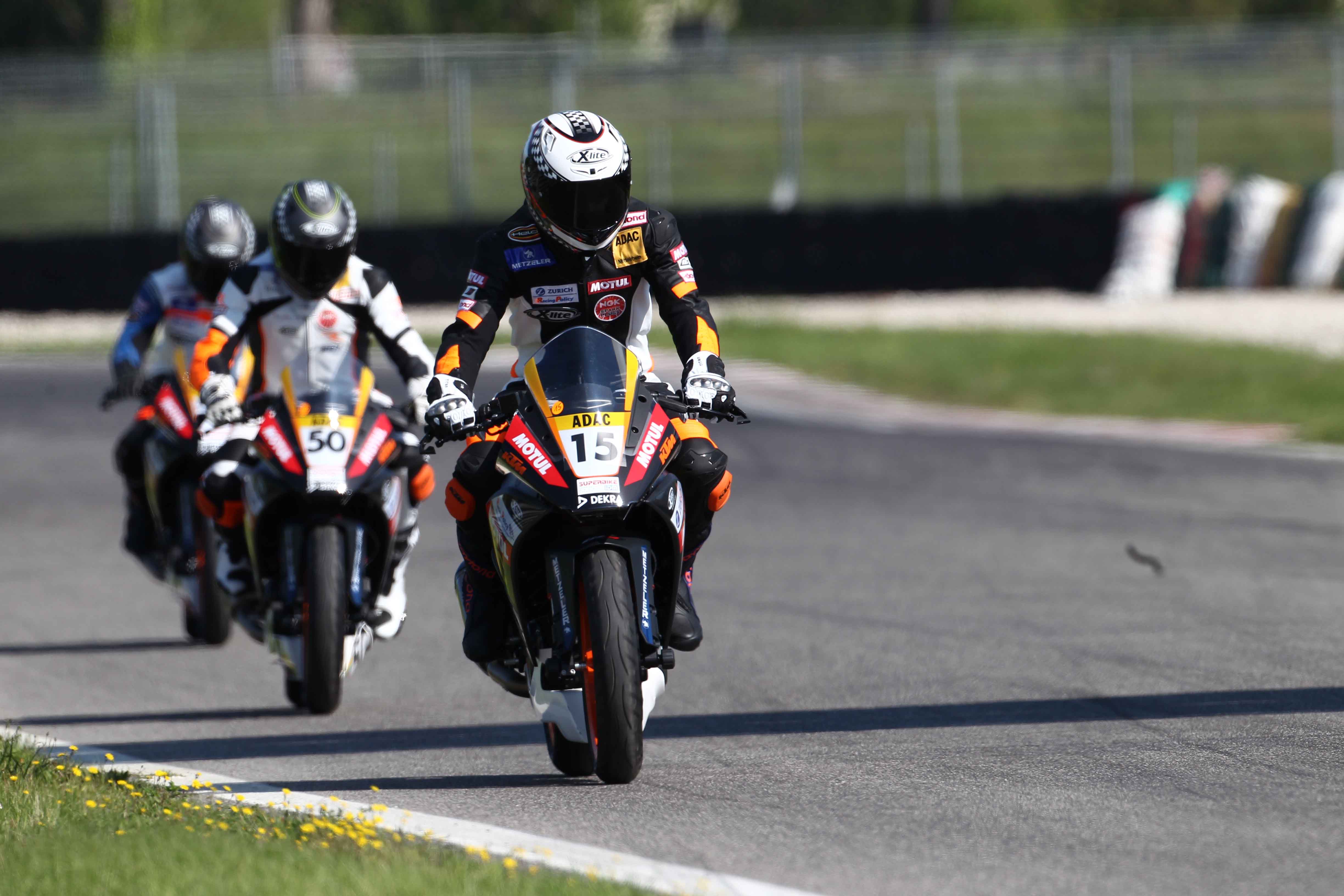 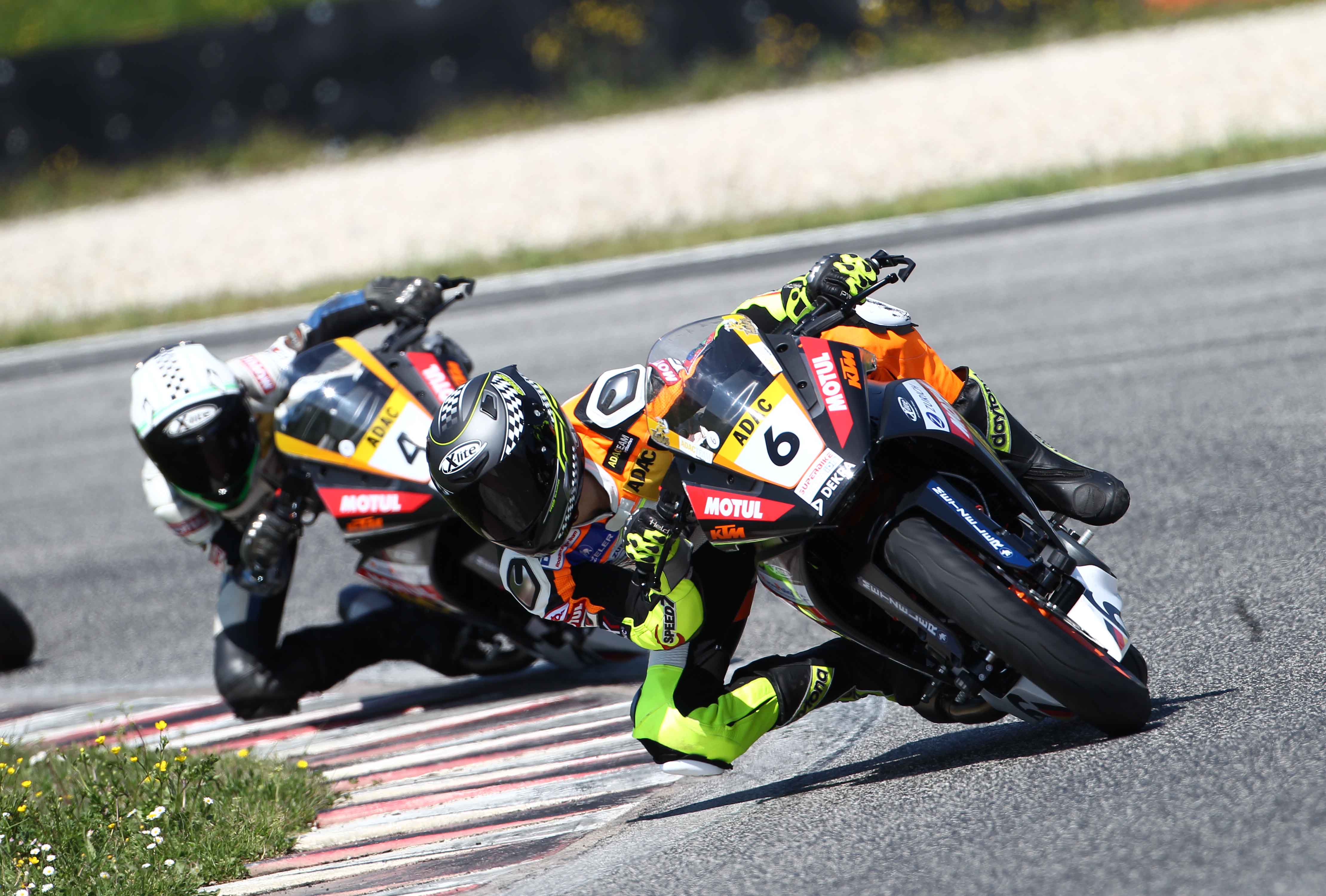