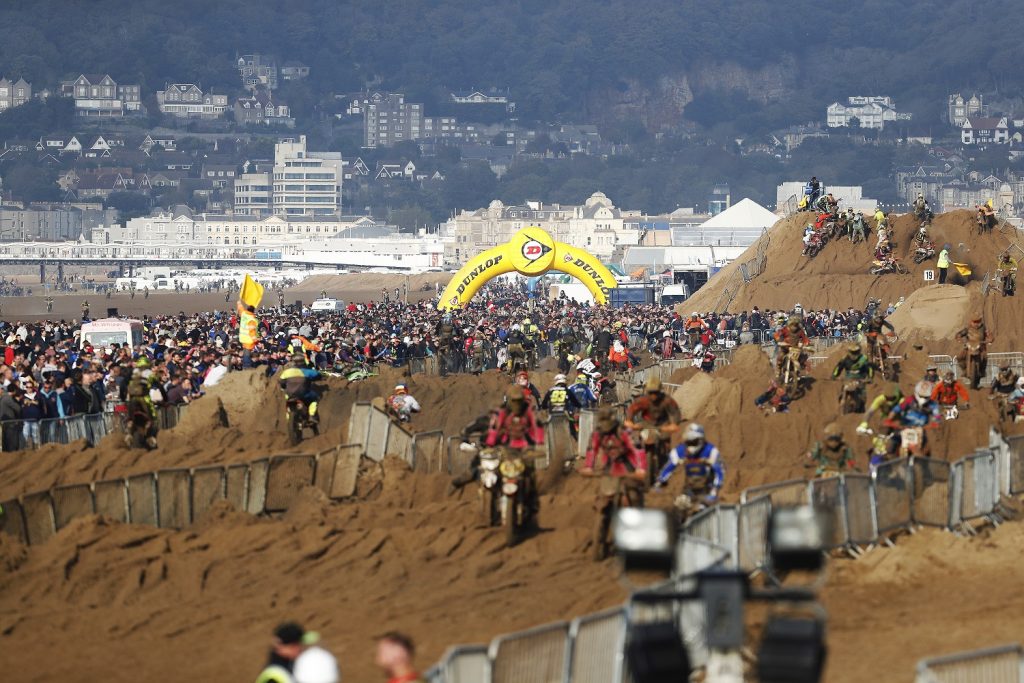 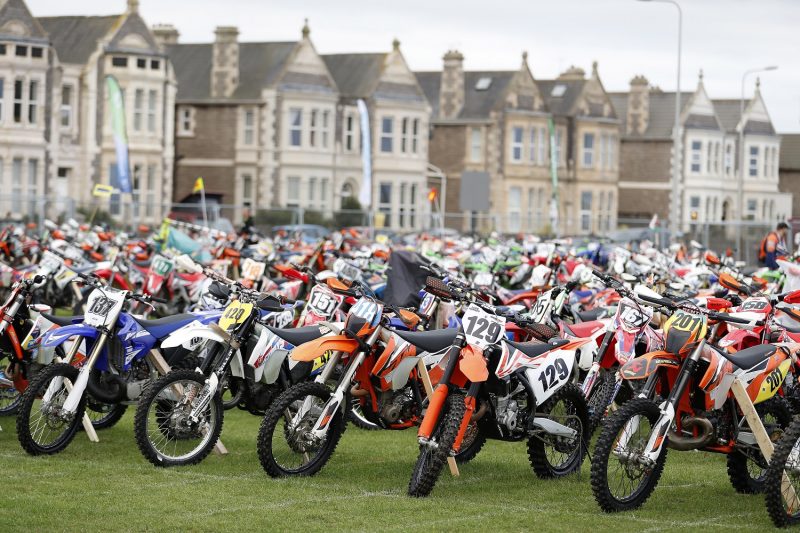 The otherwise normal English seaside resort of Weston-Super-Mare undergoes a massive transformation each October. At other times of the year, it is like any other holiday resort town with ice cream parlors, beach huts and amusement arcades. Once a year that tranquility get swallowed by a festival of dirt bike racing, 70,000 spectators and almost 1000 riders over two days racing.

The KTM 250 EXC TPI and I are among over 700 riders tackling the solo race and you never realize the enormity of racing over 700 other people until you try to run with them and find your own bike in a densely packed parc fermé. It is like a comedy film with people running in their riding kit and falling over each to find their lost machines. 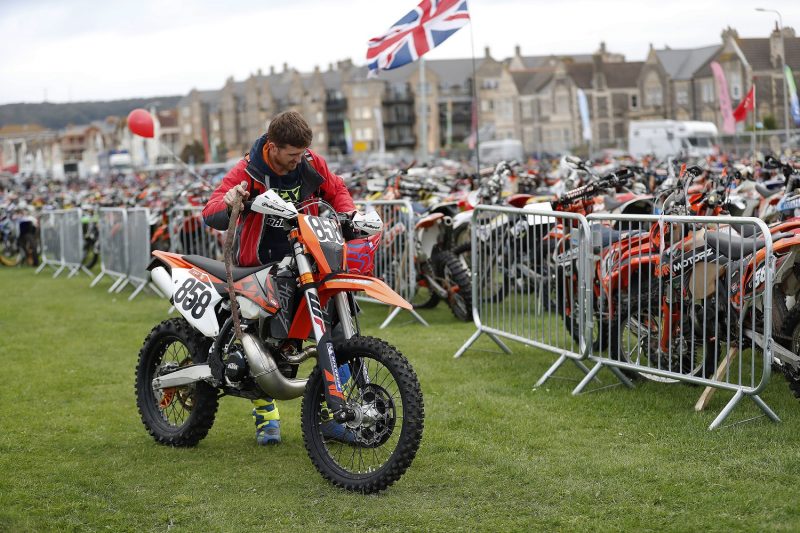 That’s just the beginning. Once on your bike you fight your way to the beach and when the gates are opened at 1 pm it is like an explosion. An angry scene of dirt bikes dance and fight for balance and grip, boots and handlebars interlock and roost flies as we all head for the same 180 degree turn over the first of a thousand dunes.

Within seconds everyone is flat-out down the mile long straight into a blinding spray of salt and sunshine. Throttle pinned down Weston’s mile-long straight at 130 km/h is the sort of racing experience you should crave and fear in equal measure. 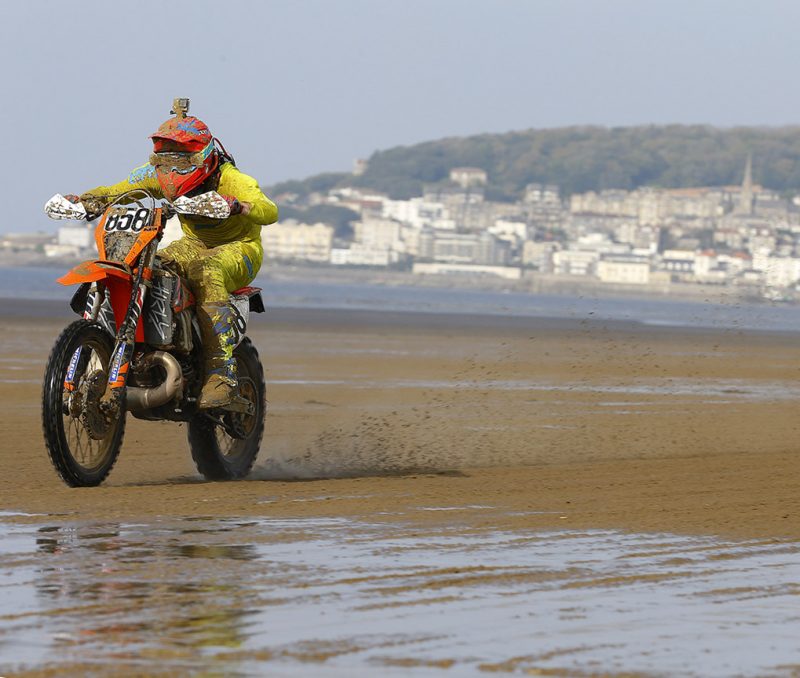 Sitting right back on the rear fender, arms stretched to the bars helps keep the front tire skimming the surface and the back wheel in control but control feels like life on a knife-edge of crashing. Many bikes are faster still, including Red Bull KTM Factory Racing’s Jonny Walker, on a KTM 450 SX-F for this event, and four times Enduro World Champion David Knight who were topping 150 km/h.

Beach race tracks famously blast down a long straight before snaking their ways back through twists, turns, dunes and endless, endless ruts. The sheer volume of traffic means the track changes constantly and queues, like crashes, are inevitable. It’s all part of the physical effort, the challenge and the fun.

For three hours this madness continues but after the fury of the start the race becomes a mental and physical test. Some riders, and obviously pro-riders, are taking the race seriously but for many of us it is that classic “taking part” that matters. To finish is an achievement. The madness pauses for pit stops when fuel, fresh goggles and a protein bar are consumed as quickly as you can muster. 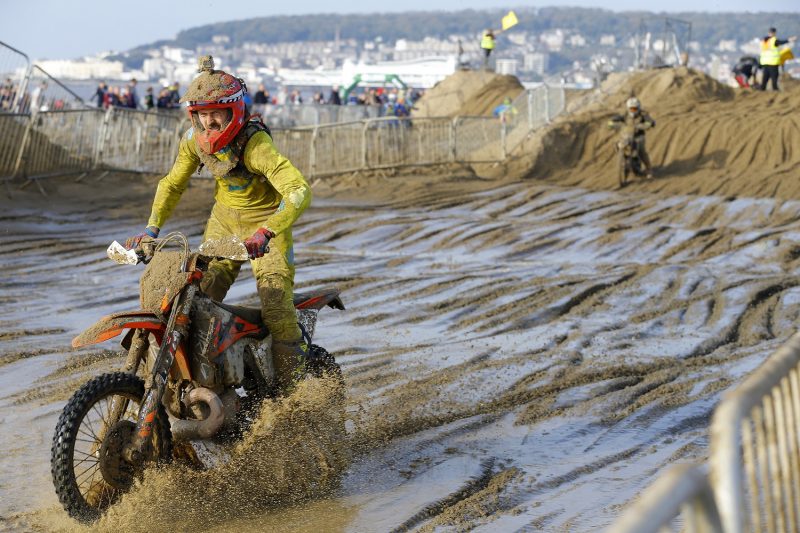 Under pinning my race is a faultless KTM 250 EXC TPI. The thrifty TPI engine easily does an hour between stops (more easily than the rider …) and takes around seven liters of fuel during each of two pit stops proving itself efficient despite so much full-throttle riding.

The salt water, footpeg-deep ruts and endless roost is why bike preparation is so important in beach racing. I’m new to it but careful pre-race preparation pays off with a perfect bike. I fit a new plug and sand guards over the radiators and air filter – mesh covers on the radiators and filter act as first defense and create a barrier. Supersprox steel tooth sprockets and a heavy-duty chain are vital too, as are fresh brake pads to cope with the axle deep, sandy ruts acting like grinding paste on these constantly battered parts.

There are bikes abandoned in the deep sand swamps from lap one and they remain there all race, petrified like Pompeii corpses. Under no illusions about my experience on sand my tactic was to keep plugging away, keep taking in fluid and keep myself upright. In the end getting inside the top 100 feels like a small victory from so far down at the start of this mighty event. It’s hard not to feel happy when you see a chequered flag but after three hours of this madness it was as sweet as they come. 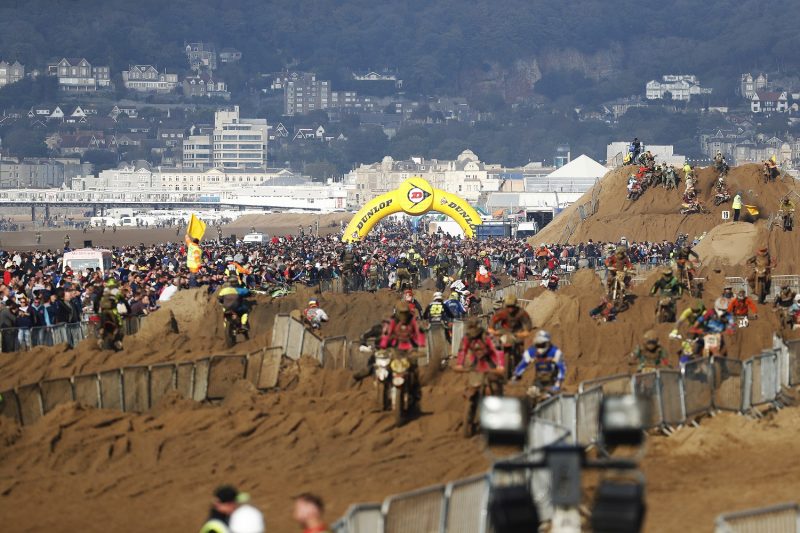