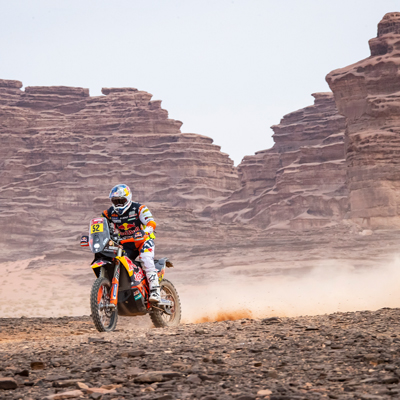 Kilometer after kilometer the concentration, the energy, the navigation, the physicality and all while keeping the throttle absolutely twisted. Desert dunes, to rocky mountains, the Dakar Rally is a battle of endurance for both rider and machine.

The 2021 Dakar was a whirlwind from start to finish. Not just because of the challenges the teams and organisers faced to even get there and make the event happen, but because of its intensity, its landscapes and incredible stories. The Red Bull KTM Factory Racing team are no strangers to victory at the world-famous event, having won on an incredible 18 occasions, and while victory wasn’t orange in 2021 this January, the team took the battle to the wire to finish with a podium result.

With a three-rider line-up all with Dakar winning experience, Red Bull KTM Factory Racing had made its pre-season preparations in Dubai. Matthias Walkner, Sam Sunderland and Toby Price were especially happy to be back on their KTM 450 RALLY machines after a rather empty 2020 season due to the pandemic. We know racers have to be fully immersed in their sport, and Price committed five months to living in a hotel away from home – in his words ‘all for the hope of that moment of glory’. The 2021 Dakar, which moved from South America to the Middle East two years ago, provided a high level of competition with big desert battles, rocky and stony terrain, a variety of weathers and a race to remember. Making the most of his pre-race prep, Price put the hammer down with a stage win on day one and six and would claim the lead of the race on reaching the rest day after stage six.

Incredible stories are a mainstay of this tough race, which navigated this year over 7,646 km and the marathon stage, which began the day after rest day, particularly brought its challenges. A cut tire for Price after hitting a rock and no intervention allowed from team members overnight meant he had to make a special repair with gaffa tape and cable ties, which amazingly held out over 709 kilometers the next day. It’s a legendary tale; he made it back, with one cable tie remaining and in second position on the stage despite riding ‘conservatively’. Whether the fatigue associated with that incredible feat was a factor or not, the two-time Dakar winner was injured on stage nine and unfortunately had to abandon the race.

Talking about digging deep and overcoming challenges; Austrian ace Walkner made an incredible comeback from a technical issue on stage two, where he lost approximately two hours over the leaders. He battled day by day to fight for an impressive ninth overall. With Sunderland the only man in the fight for the number one spot, the British ace had ridden consistently throughout and a stage win on the penultimate day after an astounding effort put him within a handful of minutes of the race leader. After a Dakar where the pendulum of results swung each day, he knew that opening the final stage would possibly be a disadvantage, and while he battled to the final moments, Sunderland concluded the event in a commendable third after one of the toughest Dakars in recent memory.

“After losing over two hours early on, I knew fighting for the podium would be almost impossible. From then on, my plan was just to take each day as it comes and aim for good stage finishes and a nice, safe end to the race. To finish ninth overall is really good, especially with such a high level of competition. Now I’m hoping we can get more racing done this year and come back next Dakar for a better result,” said Walkner.

A hugely notable performance was from KTM rookie Daniel Sanders. A face planting crash and a hugely swollen lip due to a bee sting could not slow the Aussie down. With top three stage finishes and consistently fast performances, the former enduro racer did an incredible job to finish fourth. He’s set the bar high; Dakar was only his second Cross-Country Rally, but with the mentoring of the KTM Factory Racing Team Manager Jordi Viladoms, as well as the opportunity to learn from his peers, Sanders has made the best of his opportunity in the KTM Factory Racing Junior Rally Program to establish himself as a serious contender.

“All in all, it’s been a pretty perfect first Dakar for me. It started off with a good Prologue and then day-by-day I learned a little more and gained as much experience as possible. I’m really pleased to come away with fourth overall and as first rookie, so that’s cool. I’ve only really spent four months on the KTM rally bike, learning as much as I can for this, so I can’t thank Jordi and the whole team enough for all the hard work they have done and the faith they put in me,” said Sanders on completing the rally.

The team of course had hoped for more but as stated by Viladoms, it was an incredibly tough event: “After fighting for the whole race, to come away with a podium is positive, but of course we had hoped for more. Clearly, this event has been hugely challenging for all competitors, a true test of character and a true test of not only the riders but all of our team. I’m very proud of the effort everyone has given.”

On reaching the finish with a podium third Sunderland said: “I’m glad to be here safe at the finish line and in third place. I honestly think that has been one of the toughest races I have ever done – the pace at the top is so high, we’re having to fight every single day and there is no time to relax.”

The Dakar Rally is a huge team effort, with the travelling bivouac that follows and supports the event for its 12 stages. The magic of this thrilling race, which also includes other classes such as cars, trucks and quads is so special and we’re already looking forward to next year. In the meantime, check out some of the incredible images from the second half of the 2021 Dakar Rally.