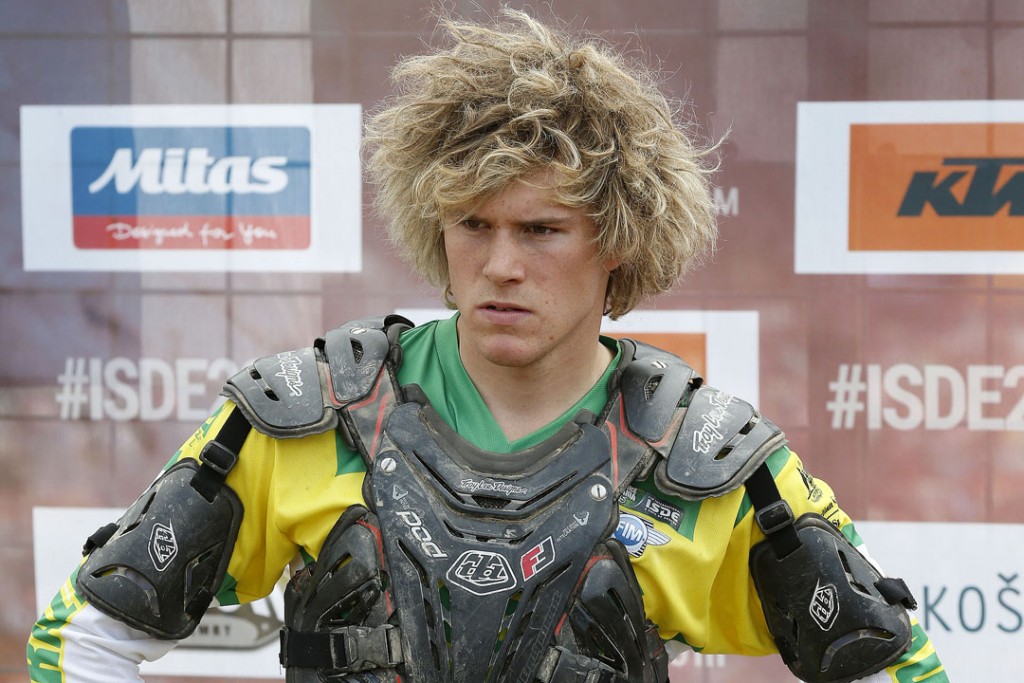 Daniel Sanders: The Aussie Kid who took 90th ISDE by a storm

Australian Daniel Sanders was one of the standout performers at this year’s International Six Days Enduro in Slovakia.

The 21-year-old from Melbourne topped the Enduro 3 class, finished fourth outright and led the way for Australia to capture the FIM Junior World Trophy. Quite an impressive outcome for a young man who is only just starting to make a name for himself in the world stage … 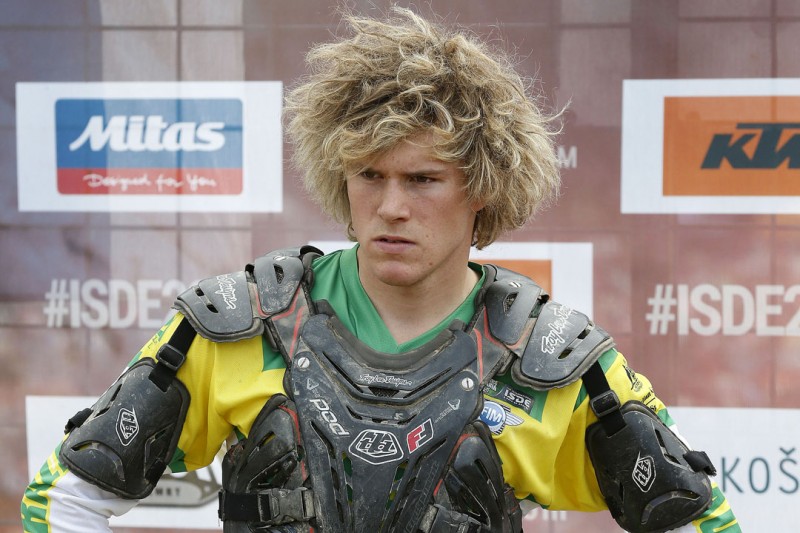 Congratulations Daniel, you must be over the moon with your results?
“Thanks, it’s been an incredible week. Honestly I can´t believe how well it’s gone, I definitely didn’t expect it go as well as this. It’s been amazing.”

Let’s jump back few years, how did you first get involved in riding bikes?
“My dad was an Enduro rider. He raced a couple of Australian championships in the late ‘80s but quit and started a family. My elder brother took up riding when he was around twelve. I was a bit younger but a highly energetic kid. Our dad didn’t want us to start too early but he eventually gave in and got me a bike. There was no rushing into racing though. We own an apple farm with something like 40 acres of bush and grass so we rode there. It was like a huge playground where we could simply ride our bikes. But it wasn’t the only thing we did. I played a lot of other sports like basketball, cricket and football. I rode motorbikes whenever I could.”

What’s your racing background and how did you reach the point to be fighting with the best in the world?
“I started racing when I was 13, doing club days. I wanted to go faster and faster. I dreamt of being like my father and wanted to get better. I did all the Australian state stuff but was always the second placed guy. It was like that up to Juniors and the first five years after I started racing. When I got into Seniors, the same guys were there and I was still getting second place. But in 2014 something clicked. I won the Under 19 class and finished sixth overall in the Australian Offroad Championship. I was working in the family business and spending all my money to go racing but that’s exactly what I wanted to do. There’s no better feeling than that and I always pushed to try and get there. This year I finished fourth overall in the Australian Championship and second in Enduro 3 behind Toby Price. That was the best I’ve done until this year’s ISDE.” 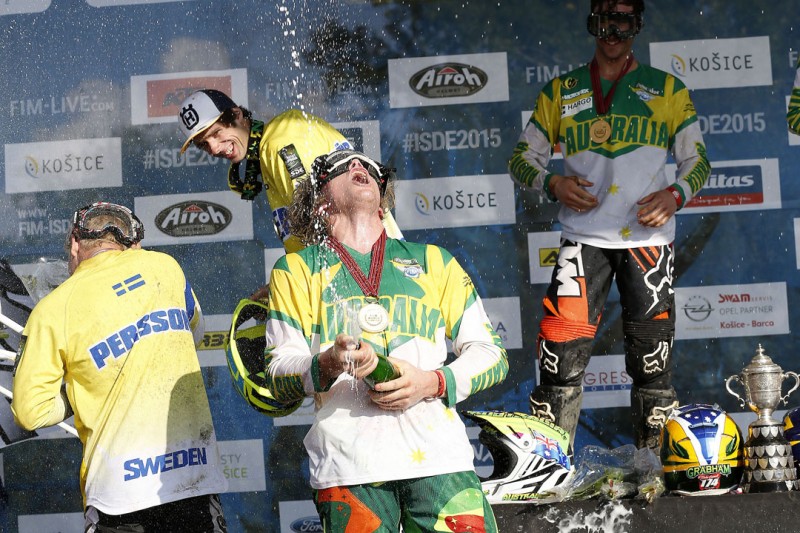 What were your pre-race goals and expectations before the ISDE in Slovakia?
“Slovakia was my second ISDE. I did my first one last year in Argentina but didn’t have a good setup and finished 20th. Coming into Slovakia I was hoping for a top 15 and knew that maybe I could get a couple of test times in the top 10. But once the race started I was second and third in some tests and finished fourth overall on day four. That was just amazing. Winning E3 was another crazy achievement that I wasn’t expecting. The race didn’t start that good. On day one I was passing two to three people a test so I lost a lot of time and finished 13th overall. But then things got much better and on day two I finished seventh. For the next three days I only had top fives overall. I couldn’t believe it, crashing in some tests and still finishing top 10.”

How did you find Europe and racing in muddy terrain? How well were you prepared for those types of conditions?
“I don’t know if the conditions suited my riding or not but I just felt really good on my KTM 300 EXC. I tried to stay consistent and avoid crashing .The weather was pretty much like home. Lots of people think that Australia is just dry stuff and desert but it’s not like that. We’ve got every kind of terrain and I can obviously handle the mud equally well. Where I live in Australia we’ve got a wide range of terrain from clay to sand tracks.”

Why did you choose the KTM 300 EXC for the ISDE?
“I’ve been racing the 300 EXC for some time now in Australia and I didn’t want to change for the ISDE. I know the bike really well and can fix everything if I have to. We’ve had a good day of testing with the Australian team prior to the event and we found some good settings. As the race went on I got consistent with the power, adapted to the terrain and really gelled with my bike. I felt really fast and smooth on the 300 EXC, without making many mistakes. I believe the 300 EXC is one of the best options for such a long and tough event. All I did was change air filters and tyres at the end of each day. I changed brake pads once, that was it.” 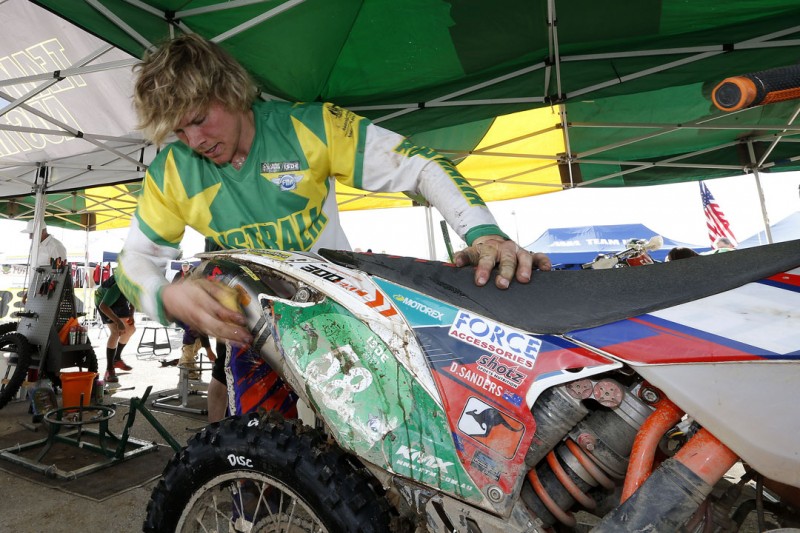 What’s been your highlight from this ISDE?
“It’s been a great event for so many reasons. I’m really happy for my team winning the Junior World Trophy and personally for topping the E3 standings. I got a second outright in a test and a fourth overall on day four. There have been a lot of highlights for me in this ISDE. Overall it’s been the best week of my racing career.”

What’s your racing plans for the future?
“Right now I’m going to stay in Europe for a while and then race the final round of the Enduro World Championship in France on the first weekend of October. I just want to see how it is and how it goes. I’ll race the Enduro Juniors class. I’m still 21 and have another two years if I want to go on racing the Junior class in the EWC. To be honest I’d love to do what Matt Phillips has done – come over and race in Europe. Matt’s done really well so I reckon I could try to follow his footsteps and maybe win a world title over here. I’ll go to France to see where I’m at and what I need to improve on. If I get it right over there it’s going to be awesome.”

56 Responses to Daniel Sanders: The Aussie Kid who took 90th ISDE by a storm