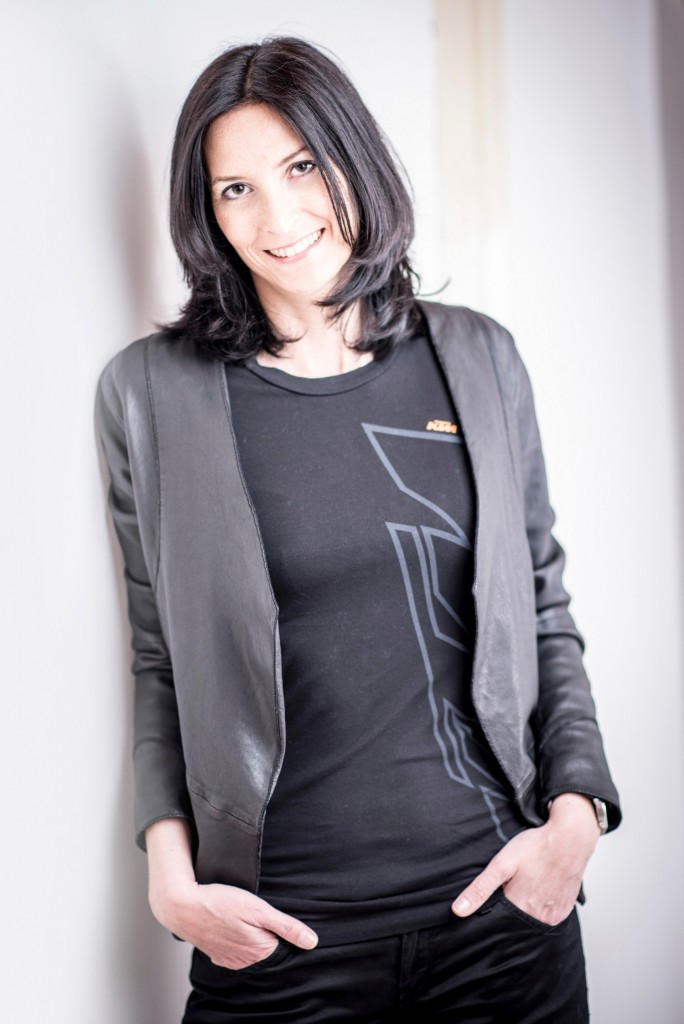 Expanding the Orange: KTM in bloom

KTM board member Harald Plöckinger recently stated in an interview that he felt the people at the company was one of the reasons behind the rate of growth and success in the last half a decade. We spoke to Vice President of Human Resources at Mattighofen, Berit Buder, to find out a bit about how the orange has pulsed … 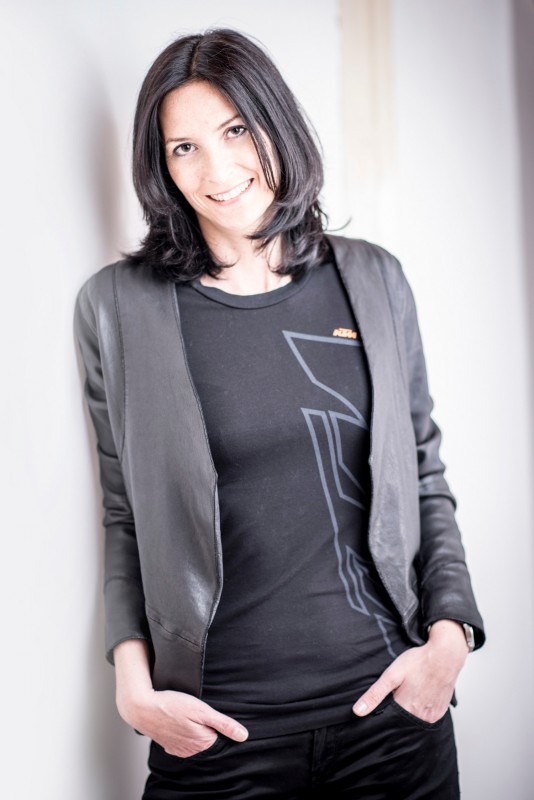 The additional third floor of the principal factory edifice and shiny new buildings around the periphery of Mattighofen and Munderfing are the easiest reminders that KTM is moving and multiplying as fast as the speedometers on the bikes themselves or as units are churned off the factory lines; reaching a total of 160,000 for 2016 as the shifts keep the factory lights burning.

Enlarged model ranges and a virulent street segment means that KTM are sprinting with the baton and need more members of the relay team to keep the momentum. The firm has grown to more than 2,800 personnel globally (more than 2,400 in Austria), having flowered by more than 17% from 2014 to 2015 and in the last two years has swollen by over 700 up to this September. The influx has come through demand, and the need to find a deep and appropriate spectrum of specialists: from suspension to spreadsheets, vendors to video, dirt nuance to digital marketing. 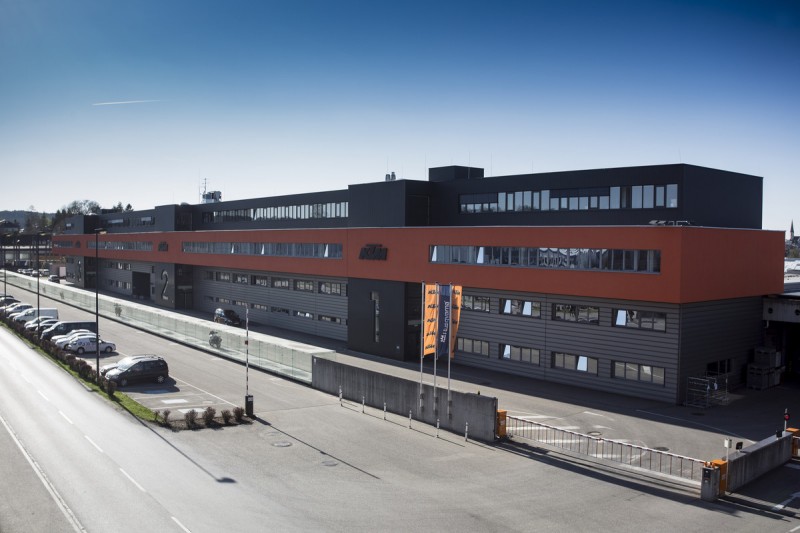 “It was very challenging to find the right people for specialist positions,” says Ms Berit Buder, Vice President of HR for almost four years at Mattighofen and who has overseen the employment of almost a quarter of the company in that time. “We had a lot of new positions and there was a tendency for new skills and competence. We hired people for new know-how so it means special skills for special departments … inside R&D for example.”

“I have recruiters that are specialized for our departments so they know about the area and the skills needed and what we are looking for.”

R&D itself has blossomed from less than forty technicians to almost five hundred in fifteen years. Taking into account all the other departments also requiring ‘hands-at-the-pump’ and decent levels of experience and knowledge and it meant that KTM had to get a bigger and efficient employment procedure in place quickly. “We do most of our recruiting for Austria and only sometimes for sales departments abroad but it was definitely a challenge to set up recruitment and establish processes,” Buder continues. “We launched an application software tool; this was a first step actually in order to handle the applications for jobs. We re-launched the career page on the website and built up a recruitment team.”

Designers, engineers, testers, assemblers and marketers of the new motorcycles are therefore not the only ones running at a furious pace. “The growth is enormous … but we have a budget and a forecast so based on this we plan our activities in HR,” she adds. “For instance in the production department we also used temp workers as a form of recruiting.” Perhaps the MotoGP operation is the most high profile case of how KTM have had to forge an additional staff roster both in the halls of Mattighofen/Munderfing and also at the racetrack, but this is a niche field where personal contacts for the ideal CV is the easiest way to pinpoint the right individual. In general how is everybody else sporting a black or orange shirt getting a pass for the gate? “We use the career webpage,” Berit says. “It is important for us to be well known and be a good brand so we get a lot of applications and then to pinpoint the right person is then tricky. Contacts and networks from people already at KTM are essential but we also place adverts, and much more online than in print. Sometimes we also use recruiting service partners. I would say the majority of our staff has come from our adverts: online and through the career page. We also have social network activities and network with universities. Online is the main channel for recruiting.” 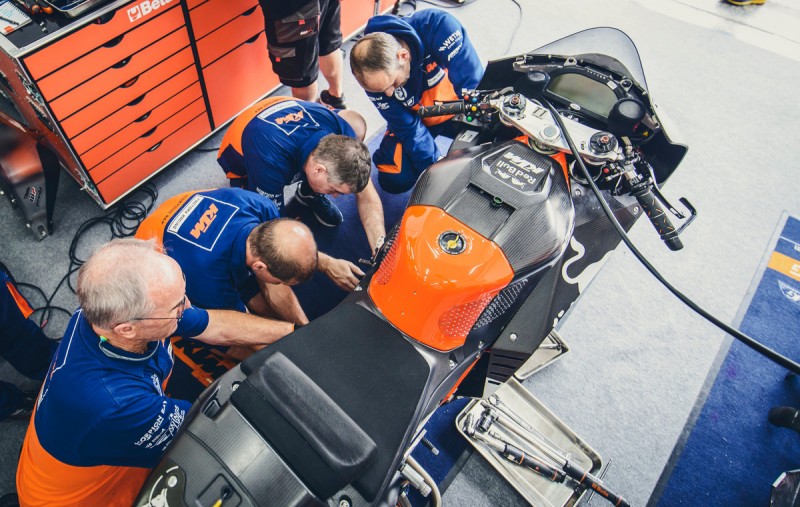 ‘The search’ is just one facet of the job for Buder and her department. There is also contract finalization and then additional help for when KTM’s latest employ has put pen to paper. “We support him or her through the contract phase,” she comments. “Austrian labor law is very strict and we have a regulation framework so it is challenging to define contracts to make it perfect for both parts.”

“KTM has become more international and sometimes there are not only languages barriers but also visas, work permit and accommodation. We try to support the employees in this respect and have some agencies we use.”

With Berit sparing time from her busy day it would be foolish not to ask how youngsters and fans of KTM could get their foot in the door against the competition. “If he or she is a ‘early-bird’ then they would apply for an internship, which is a great possibility to have a look at the atmosphere and to provide first insights into KTM,” she muses. “Various departments have them and it depends on the number [of places] but I would say we have around twenty-five a year across the board. It depends on the students and where they are with their studies or whether they have graduated. We have a lot of new projects.”

92 Responses to Expanding the Orange: KTM in bloom