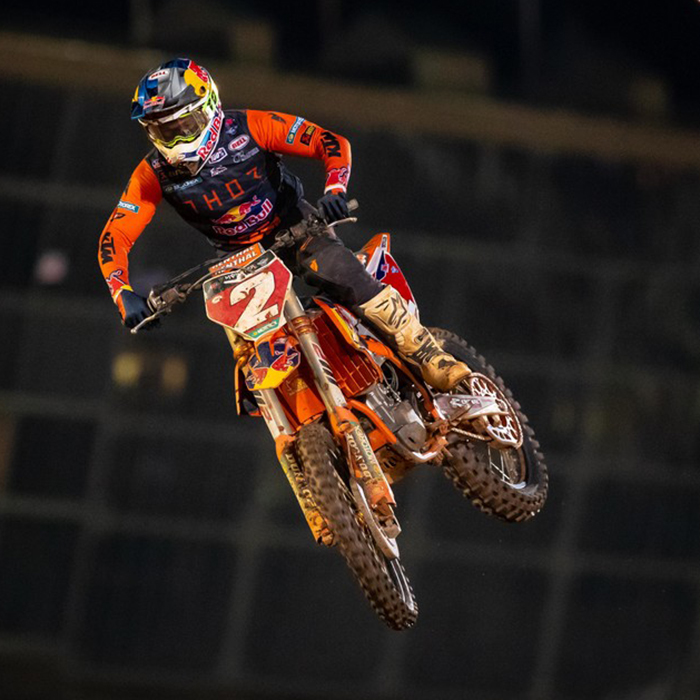 2021 AMA Supercross has been typically tight around the seven venues of the series and in the points standings where Red Bull KTM Factory Racing’s Cooper Webb has again clasped his hands on the red plate. We spoke with the 450SX championship leader as the clock ticked down on the 17-round campaign.

25-year-old Cooper Webb hasn’t always been the strongest in the practice or Heat races of a 2021 AMA Supercross meeting…but the KTM 450 SX-F FACTORY EDITION athlete warms up considerably when the pyrotechnics begin to fire right before the Main Event gatedrop. Competitive starts and ruthless stalking of high calibre rivals like Ken Roczen and Eli Tomac have been familiar sights.

Webb opened his first term with the team in the best possible way with the 2019 AMA 450SX championship: the second winner after Ryan Dungey and the fourth title in five years for the Murrieta-based crew. Illness, and struggling from a hefty crash at the start of 2020 still didn’t stop a run of 10 podiums from 11 finishes to be runner-up.

Houston ‘1’ on January 16th 2021 delivered an underwhelming 9th position but Webb then charged to seize the red plate before the decisive three-week run-in to the Atlanta Speedway and Salt Lake City finale.

A hungry, fearless and competitive animal, Webb nevertheless cracks a boyish grin when talking about his profession and his progression. True to cliché his pleasant demeanour is at odds with the roaming presence he carries on the stadium dirt, particularly through the whoops section, which has been a particular zone of his improvement for ‘21.

Regardless of how the final frantic laps of the season turn out Webb has again shown that he is not only a leader for KTM in the second highest profile motorcycle racing series in the world but also one of the indispensable names and performers in supercross, so, is he…

…better than you were in 2019? Or are things just coming a bit easier now?

Cooper Webb: “I’d like to think so! 2019 was a great year. 2020 was just a solid year as we got 2nd in the championship but I feel I’m at my best so far. I’m maturing a little bit and I’ve gotten to know the team and the bike a lot better and my competitors more. Importantly, [I know] what it takes to win at this level. This has been my best year so far.”

Your Team Manager, Ian Harrison, said he was impressed by the fact that you always ‘had a plan’ for the races. It was one of your main strengths. Would you agree?

CW: “Yeah, I think so. The preparation off the bike has been the same but I think knowing my competition a bit more and what it takes to win has helped in a season that was different to ‘normal’. We are on the road more and you have time to think and to know what to expect. I’ve fixed my weaknesses, one of which were the whoops. I feel that I have improved a lot in that department and that’s helped me a lot…but, like I said, also knowing who I am racing and how to attack them has been good this year.”

You’ve instilled a belief in the team that they will always be pushing for the podium: that’s a great compliment for a rider, isn’t it?

CW: “We work as a team and we have belief in each other. In the past I would give them a lot of grey hairs when the practice or the heat race didn’t go great but now they kinda know me, and that when the Main Event comes around that I will be ‘in it’. On the rare occasion I’m not then it’s unfortunate but to have that standard of ‘on any night, the podium or the win is our goal’ kept high means everybody is motivated. We’re always looking for that extra edge. We all work super-well together because we all have that same goal and it’s inspiring. It’s satisfying when we reach those standards.”

CW: “For me, no. I always feel I can be a bit better, but I think that’s to do with the constant run of new tracks in supercross and never knowing what to expect; different soils, different terrain. You can prepare yourself to a certain level – and know you are good in a certain area – but it’s always ever-changing right? I know I’m at the peak of the sport in terms of being one of the guys in the 450 class and going for the championship…but I honestly feel there is plenty of room for me to improve – and – the moment I stop believing that then I don’t know if I will be around racing anymore because that’s also what I’m chasing: to be better. [pause] You do get to a point where you know you are very good at something…but you know there can be more.”

That’s how elite athletes can be quite freaky: that obsession…

CW: “Yeah, it’s tough. My wife always gives me a hard time. Even when I win, I’m very happy but I’m already processing what I did wrong and what I did right and what I need to work on for the next week. Yeah, it is a bit obsessive, especially for me and the attention to details but I also think that’s what makes me the racer I am. I definitely enjoy the moments we finish first because – man – it’s not easy. It’s gratifying.”

Is 2021 more satisfying than 2019? Two years ago you had the full supercross experience with the crowds and the atmosphere. Could 2021 be a bit bittersweet by the end of it all?

CW: “Nah, not so much, man. We’ve had fans again and, yeah, it’s different but is also feels a lot more normal. It would be a huge goal and accomplishment. After winning one and knowing how that is – and then the adversity of the big crash last year – to then bounce back again would feel like a huge thing, especially because I was quite far behind in points at one point this season. To claw back and win the title would speak volumes.”

With the end of the Supercross season in sight, everyone at the KTM Blog wishes Cooper Webb all the best in achieving the 2021 AMA 450SX Supercross crown.

7 Responses to FLYING: SIX QUESTIONS WITH COOPER WEBB ABOUT ANOTHER SUPERLATIVE SUPERCROSS SEASON