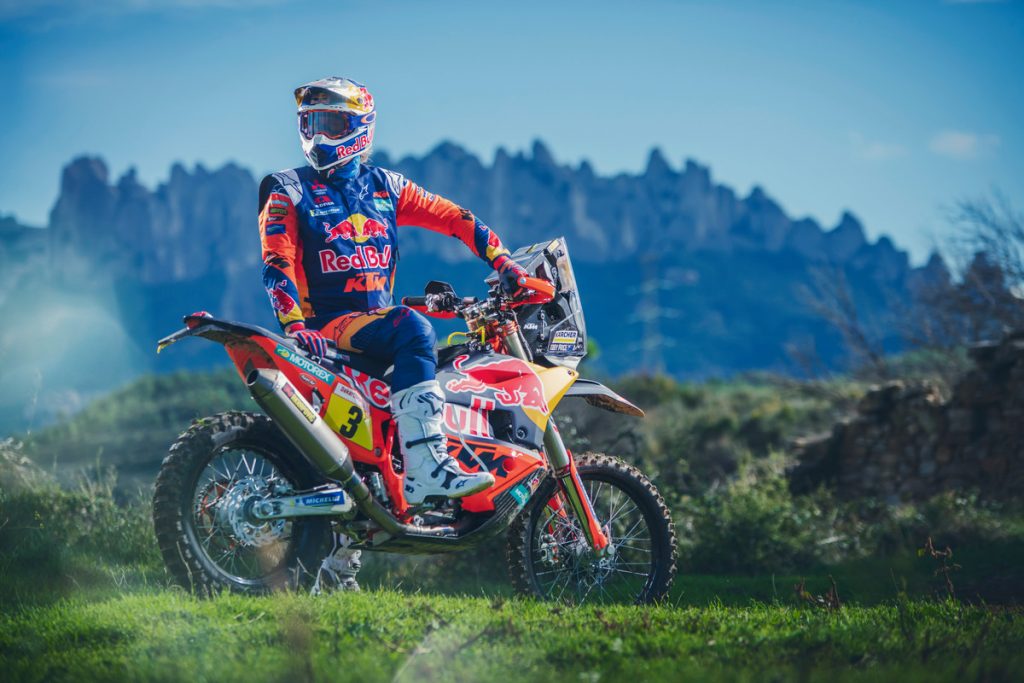 Toby’s Dakar journey started back in 2015. Riding for KTM as a support rider to the notably more experienced duo of Marc Coma and Jordi Viladoms, the Australian finished on the podium to surprise not only many of the Dakar regulars but also himself.

“I was shocked to be honest, I certainly didn’t expect to finish on the podium. Going into the event, I knew it was going to be tough – my goal was to finish top 20, but I was definitely hoping to go a little better and maybe even crack the top 10. As the rally went on, my results improved, even taking a win on the penultimate stage. I just kept my head down and kept charging. Finishing third was amazing and I was hooked from then on.” 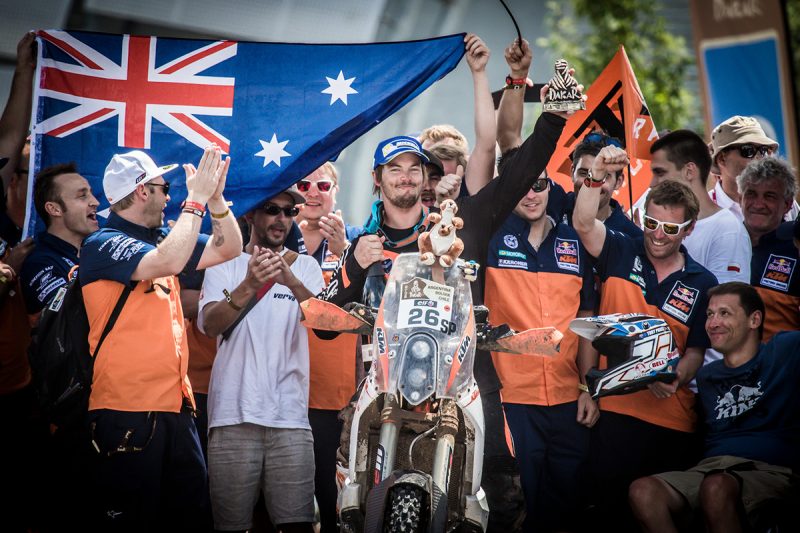 One year later, Price was standing on the top step of the Dakar podium. In what was only his sixth ever rally, the multiple Australian Offroad Champion won five of the 13 stages and his winning margin at the end of the 9,237 km race was close to 40 minutes.

“It’s hard to put into words how tough the Dakar is, if you haven’t experienced it for yourself it’s not easy to understand. Just finishing the event is a triumph – winning it feels truly amazing.” 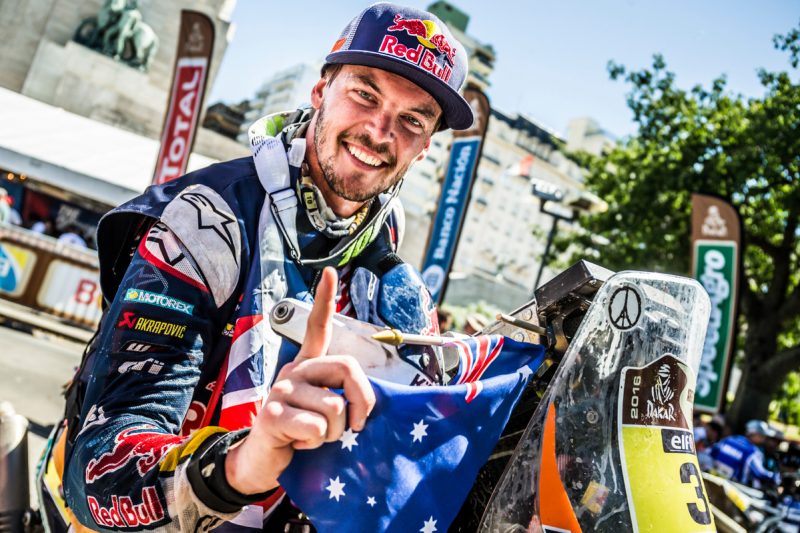 Not surprisingly, following his Dakar success his focus was 100% on cross-country rallying. Claiming third place in his first full season in the FIM Cross-Country Rallies World Championship, Price went into Dakar 2017 full of confidence.

A strong start was followed by a win on stage two as it started to look like Price could claim a second consecutive victory at the event. A navigational error cost him a lot of time on stage three and the Aussie went in to the fourth stage looking to claw back valuable minutes. Disastrously, a crash when pushing hard just a few kilometers from the stage finish resulted in a broken femur and the end to his Dakar Rally for that year.

To say 2017 was ‘a challenge’ for Price is a huge understatement. Needing time to recover properly and rebuild his strength and fitness, a planned return to competition at the OiLibya Rally of Morocco ended up with Price needing to go under the surgeon’s knife with Dakar 2018 just around the corner. A serious question mark hung over Price’s participation in the following January’s 2018 Dakar.

“I was worried. I had to have my injury cleaned up and because of the extra surgery it meant I had very little time to prepare for what is one of the toughest races in the world. I’d been off the bike for close to nine months and to come back from that and be on the pace was going to be a huge ask. The team were great though, they did an incredible job on the bike and in supporting me and I went into that first stage in Peru feeling as good as I possibly could have considering the year I’d had.” 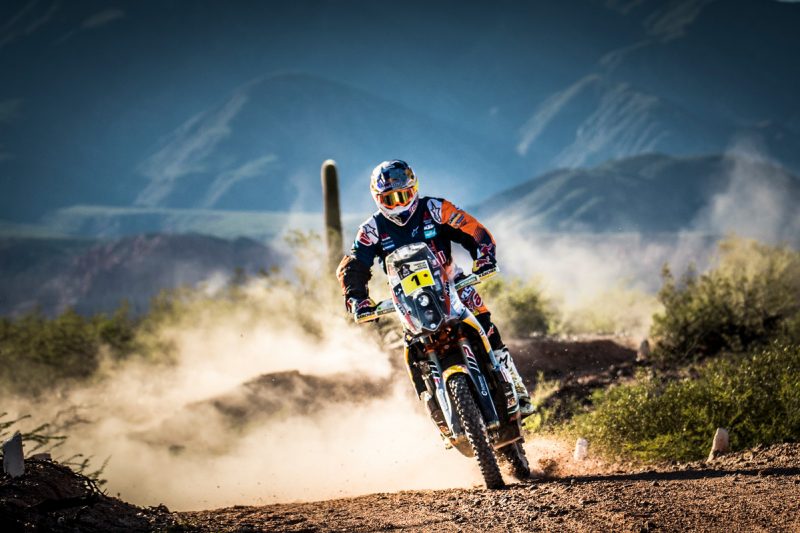 After a solid start to the rally, Price went from strength to strength, finding pace when other riders were beginning to tire. With two consecutive stage wins and a second place on the 14th and final stage, the 2016 Dakar winner successfully completed the rally in an impressive third place.

“I was so happy to get to the finish line in Argentina – that was always my main goal right from the start. To finish the Dakar Rally is an achievement in itself, to come away at the end of the race with a podium was unbelievable, especially after such a difficult year. The whole team came together and worked so hard, our results simply wouldn’t be possible without all the great people around us.” 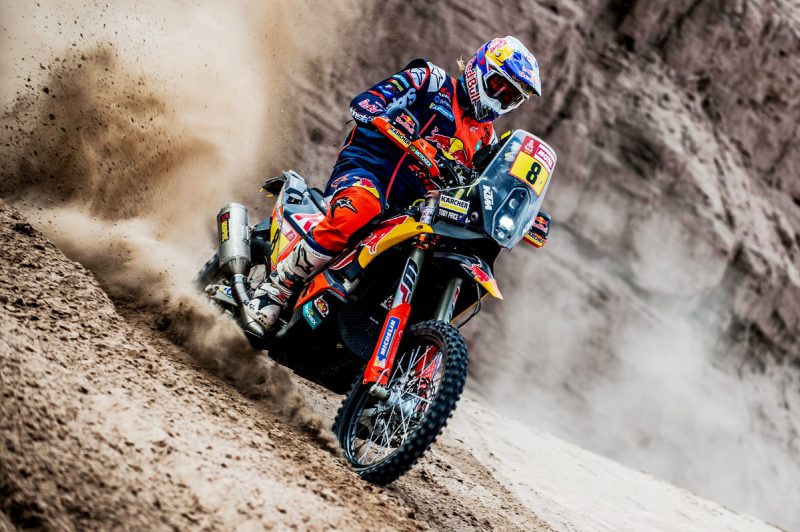 The start of the 2018 world championship season wasn’t so successful for Price. At the first race in Abu Dhabi things started off well with a win on stage one, with Red Bull KTM Factory Racing riders claiming the top three positions on the day. Going into stage two, and despite another strong start, a sizeable crash caused damage to a fuel line on his KTM 450 RALLY, which ultimately cost close to 30 minutes. Price crossed the line in 11th position. The Australian was able to fight his way back to seventh overall, but with his main championship rival Pablo Quintanilla taking the win, it would be a huge challenge to make up enough points over the remaining rounds to claim the overall championship title.

“Seventh at the end of the rally was not where I had planned to finish. Having said that, after the crash I had I was glad to complete the rally in one piece. I didn’t give up and pushed right to the end, although it was always going to be tough to try and make up for so much lost time.” 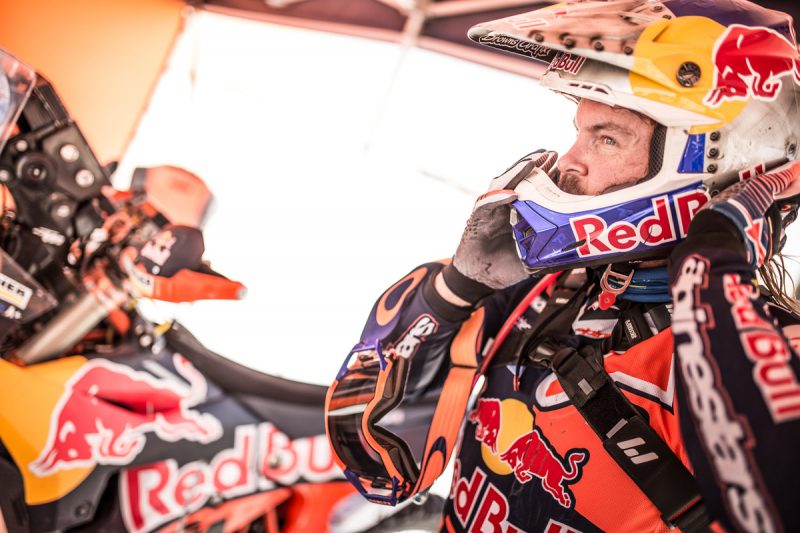 With the major teams deciding not to contest round two in Doha, it wasn’t until the Atacama Rally in Chile and round three that Price could regroup and fight once more for the title. Riding consistently and never finishing outside of the top five, the 31-year-old claimed the runner-up position on the podium and went a little way to putting his world championship campaign back on track.

“I set out at the beginning of the Atacama to ride consistently and get back up to speed with the bike and navigation after the break over the summer. To take second after such a tricky race was really encouraging and helped to build my confidence for the last two rounds.” 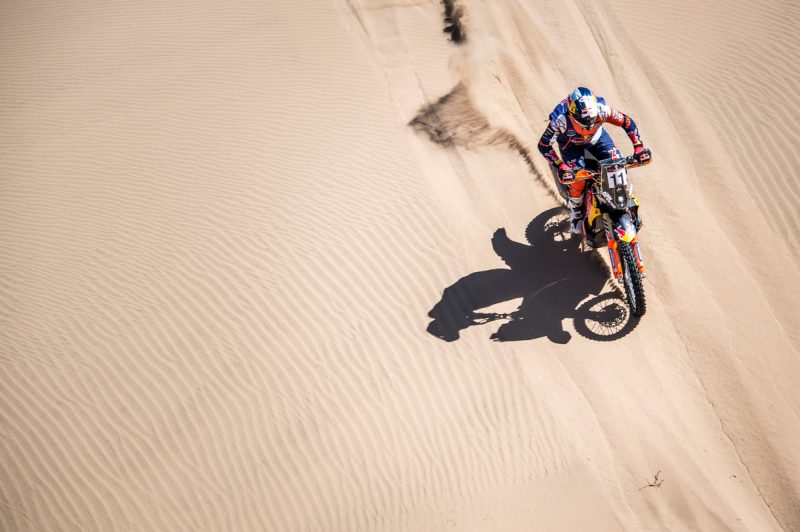 Another strong ride in Argentina at the Desafio Ruta 40 took Price to another second place, a mere six seconds from the win after 17 hours of riding. Most importantly however, Quintanilla was again one place behind giving Price an extra few points in the championship battle with just one round left to race – the Rally du Maroc.

The rankings were close heading into the final round with Price trailing the leading Quintanilla by just eight points. Any one of the top six riders in the standings had a chance to take the championship title however, and it would all be played out in the sand of Morocco.

Despite the pressure of the championship chase there was only one option for Price and that was to come out swinging, and that is exactly what he did. A win on the opening prologue stage threw down the gauntlet to his competitors. He backed it up with a win on stage one.

Despite opening the route on stage two, Price led most the timed special and was only narrowly beaten on time by teammate Matthias Walkner. Holding the overall rally lead heading into stage three – the first of the rally’s marathon stage – Toby rode a safe 280 kilometers, conserving himself and his machine, to arrive sixth at the bivouac.

With just the final two stages left to complete, Price gave it his all – posting the fastest time on the long stage four, finishing one place ahead of Quintanilla to secure his overall lead at the event with just the one day remaining.

The fifth and final stage of the rally, and indeed the 2018 world championship, could not have gone much better. A close fight with Honda’s Kevin Benavides took Price to second place, just 12 seconds behind. The result was enough for the KTM rider to claim overall victory at the rally and in turn, the 2018 FIM Cross-Country Rallies crown.

“It was such an amazing season – I still can’t believe it. It was seriously tough and after a slow start in Abu Dhabi I never dreamed I would be champion at the end of it all. Despite injuries and setbacks during my career, I have never given up, I have always looked ahead and tried to take some kind of positivity from it all. I was really nervous going into that last day in Morocco, despite my lead you can never take anything for granted in rallying. This is my first ever world championship and after such a positive Dakar at the beginning of the year, 2018 has been incredible. It’s all credit to my team and everyone at Red Bull KTM, without them behind me I wouldn’t be in the position to do the things I do. To stand on top of the world is the best feeling ever.” 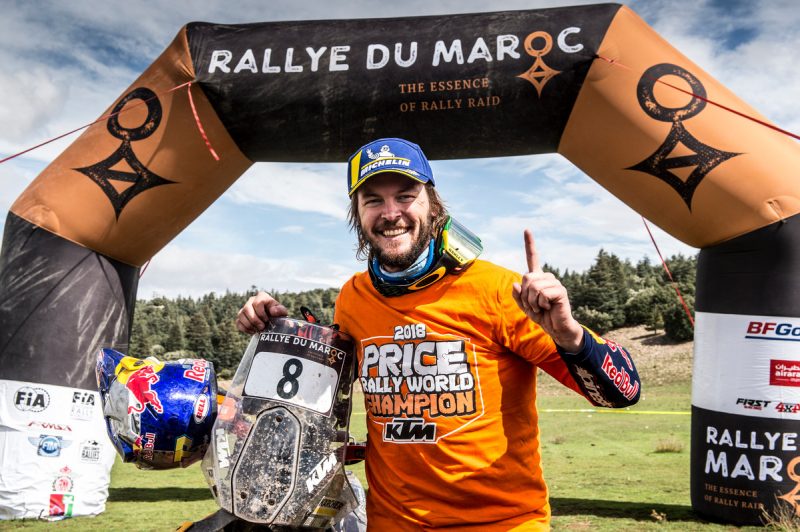 Toby now looks to Peru and the 2019 Dakar Rally. The Australian has another injury-battle to overcome, having fractured his right scaphoid in training for the event, which is a definite reminder of the elation and challenges involved in racing offroad. Toby is a determined man though, and he fully expects to be racing in the new year – with his comback history, who knows what he might be able to achieve in the 10-day event. What is clear is that his goal will remain the same as every year; a good safe ride and a strong finish. We wish you a fast recovery Toby and look forward to seeing you at the Dakar! 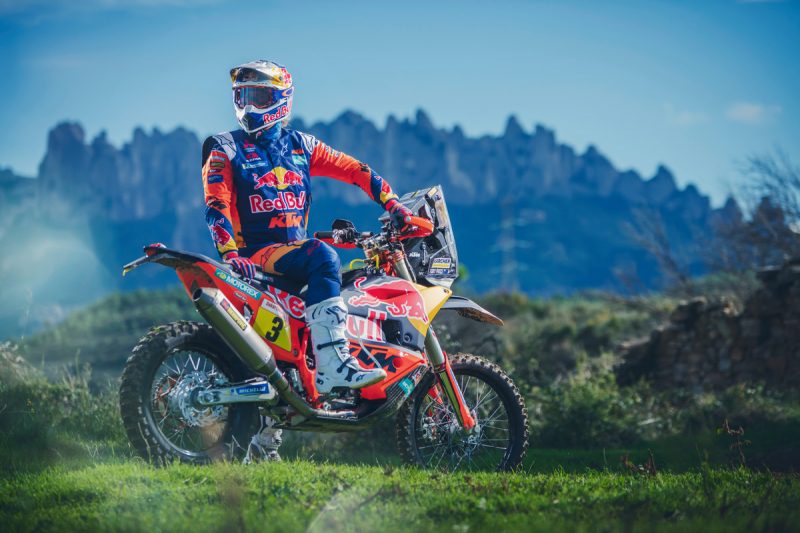 35 Responses to Interview of the Month: Toby Price – Bouncing back from injury and his journey to the 2018 Rally World Championship