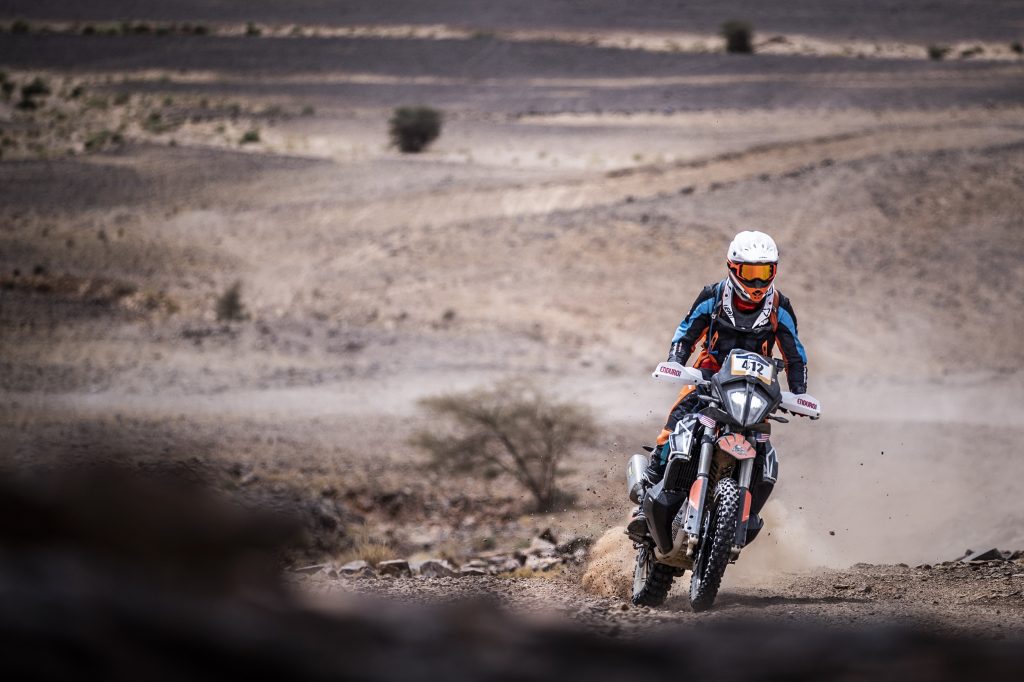 The KTM 790 ADVENTURE R put to the ULTIMATE RACE test

ULTIMATE RACE podium finisher Jordan Huibregtse reviews the KTM 790 ADVENTURE R he raced this year in the desert of Morocco. 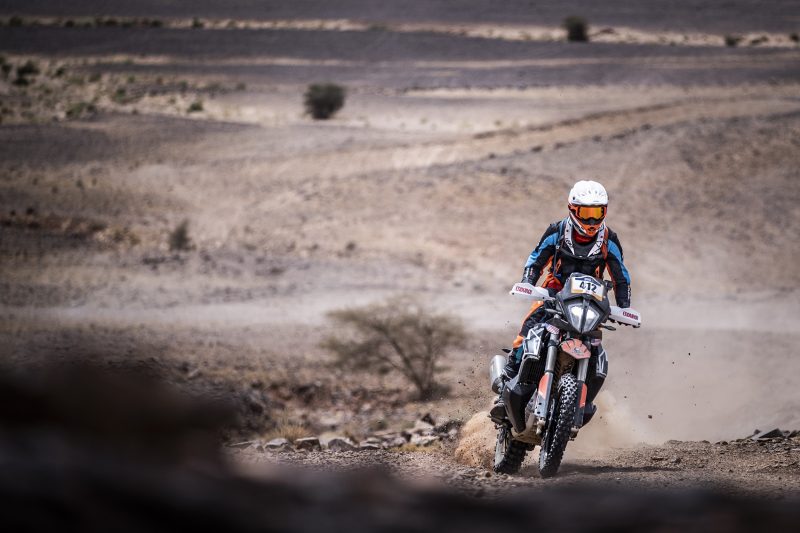 An experienced adventure motorcyclist, Jordan Huibregtse has put in thousands of hours riding his own 2005 KTM 950 ADVENTURE in the gravel roads of Midwestern North America. Topping the ULTIMATE RACE qualifiers during the 2018 US ADVENTURE RALLY in Park City, Utah, Jordan secured a spot to live the riding experience of a lifetime in Morocco.

“KTM was brave in giving 12 unknown riders brand new KTM 790 ADVENTURE Rs to race in a major rally event,” told Jordan. “That speaks volumes to their confidence in this bike and their determination to set it apart from the other bikes on the market. Contrary to what a few places have reported, the ULTIMATE RACE bikes were largely stock. The suspension was stock, as was the engine, mapping, air intake, and nearly everything else that I’ve been asked about.”

Kicking off with a short prologue, the 2019 KTM ULTIMATE RACE saw competitors cover five stages and more than 1000 kilometers of racing in Morocco. The race included a marathon Stage 3 with an overnight in a bivouac and no outside mechanical support. In total, almost 1100 kilometers of hard offroad riding and navigating pushed each one of the 12 selected participants to their physical and mental limits. 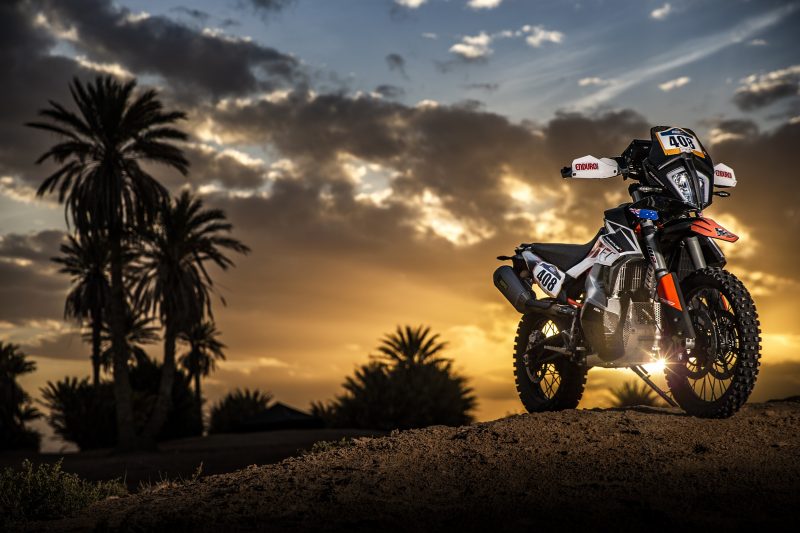 Shortly after his return from Africa, Jordan shared a full review of his KTM 790 ADVENTURE R machine on the ADVRider.com forum. With his permission, we’ve selected Jordan’s top seven highlights on the machine that led him to securing an impressive third overall at the inaugural KTM ULTIMATE RACE.

Modifications
“Bike modifications were limited to what was needed for competition. Michelin Desert Race tires with mousses were mounted to narrower KTM PowerParts wheel sets and taller KTM PowerParts seats were. All bikes also had the aftermarket Akrapovič muffler. The street grips were removed in favor of foam rally grips, and the stock steering damper was replaced with an aftermarket piece as required by race organizers. Longer KTM rally footpegs were installed as well, and of course the bikes had a powered roadbook holder mounted to the bars and a rally computer mounted above the OEM display. The sidestand switch, ABS, and traction control were disabled for competition, though we got a chance to test the rider aids before racing. Point being, the bikes weren’t custom race bikes made to look like KTM 790 ADVENTURE Rs in the interest of marketing. They were largely stock.”

Engine
“The new twin-cylinder engine impressed me. Compared to the engine on my KTM 950 ADVENTURE, the one on the KTM 790 ADVENTURE R is a lot less noisy and revs out way better at the top. The 790 engine feels like a rally bike engine in the sense that it is low inertia and likes a bit more revs. It feels very happy being ridden hard and pulls strong and smooth up to the limiter. It’s almost electric in its power delivery, a feeling reinforced by the nearly silent exhaust. At low revs, fuel injection feels ‘sharp’ in the sense that it is on the lean side. As with many new bikes, this one is ride by wire. Switching from the Rally throttle mode to Street makes it feel a bit more natural. Riding higher in the rev range and using more power, the engine feels fantastic.” 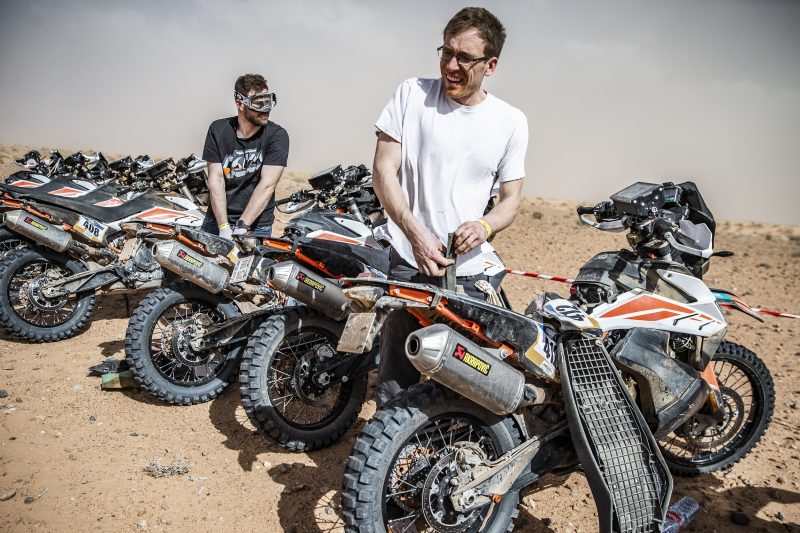 Weight
“On a cheap bathroom scale, the bike weighed 224lbs [101kg] on the front tire and 237 [107kg] on the rear with a full tank of fuel. Compare that with my 950, which has had quite a bit of light-weighting done to it: 241lbs [109kg] front and 248lbs [112kg] rear with a bit of fuel in it. The 790 also carries its weight much lower than the 950 and doesn’t have that slightly top-heavy feel. It’s initially almost disconcerting because it feels light/low, but still has all the inertia that goes along with the weight. As with most bikes, it feels lighter as speeds go up, the weight only making itself known in really big hits or when traction is lost.”

Transmission & Clutch
“Transmission ratios felt slightly tighter than the LC8 models, but didn’t seem to matter because the KTM 790 ADVENTURE R is happier at higher rpm on the road. Gear spacing is great; none of that silly short 5th to 6th jump found in some competitors. Shifting action is precise and positive as you would expect. I missed one or two shifts right when I started riding, but that was just due to my MX boots and an unfamiliar bike. The clutch took all the abuse I gave it in stride. Clutch pull is light and predictable, but the engagement zone is narrow. Personally, I would add a longer clutch pull arm, which would lengthen engagement and further reduce effort. I don’t really see any need to retrofit a hydraulic clutch at this point. While some people were more abusive, I never had issues with the clutch in the sand in Merzouga. It bit hard and consistently, and the adjustment never moved. 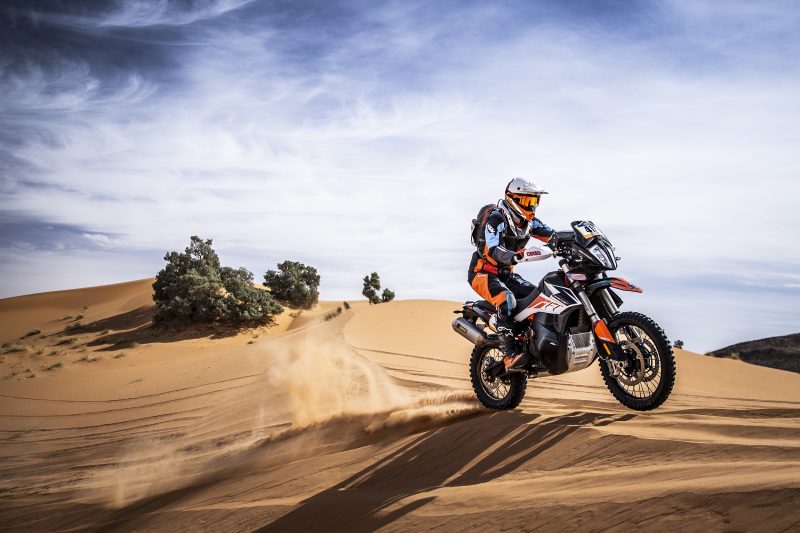 Ride modes
“Ride modes are what we’ve come to expect from KTM. I tried rain mode and it worked well. Throttle response is mushy, ABS and traction control are aggressive. Rally mode also activates the multi-level traction control. I left it down at 1 most of the time, where it only made itself known if I lost all my momentum in the sand and was trying to climb a big dune. The highest traction control levels become more intrusive and cut power, which isn’t great for attitude adjustments. Rally mode also uses the most aggressive throttle map, which is great offroad. It was too aggressive for me on the street if I was just cruising around trying to be smooth … which is probably why there is a street mode. Rally is the mode I used the most, and is the mode I would use if I had a KTM 790 ADVENTURE R.”

Chassis
“The KTM 790 ADVENTURE R has a steel frame with the engine suspended beneath as a stressed member. The trellis subframe is steel, which should resolve a lot of the problems people have had with toting luggage. It seems to be a solid design, with integrated bosses for mounting luggage racks. The bike has a small steel subframe supporting the front of the skidplate, with the bottom supported by the oil pan and some small steel brackets. Overall, the set up held up well for an OEM design, but I would be looking to the aftermarket for a solution if you plan to be double blipping over logs and bouncing through rock gardens.”

Fuel tank
“The fuel tank is the most striking difference from other adventure bikes. You get used to it, and it does a reasonably good job of protecting your feet and legs from brush, wind, and rain. I did drop the bike a few times and had numerous get-offs of varying severity in the sand and hardpack in the desert. The tank was unfazed by the hits and showed no damage beyond some cosmetic scuffs. I think the sacrificial plastic covers for the fuel petcocks do a good job to protect the tank even in more severe crashes on tarmac.”