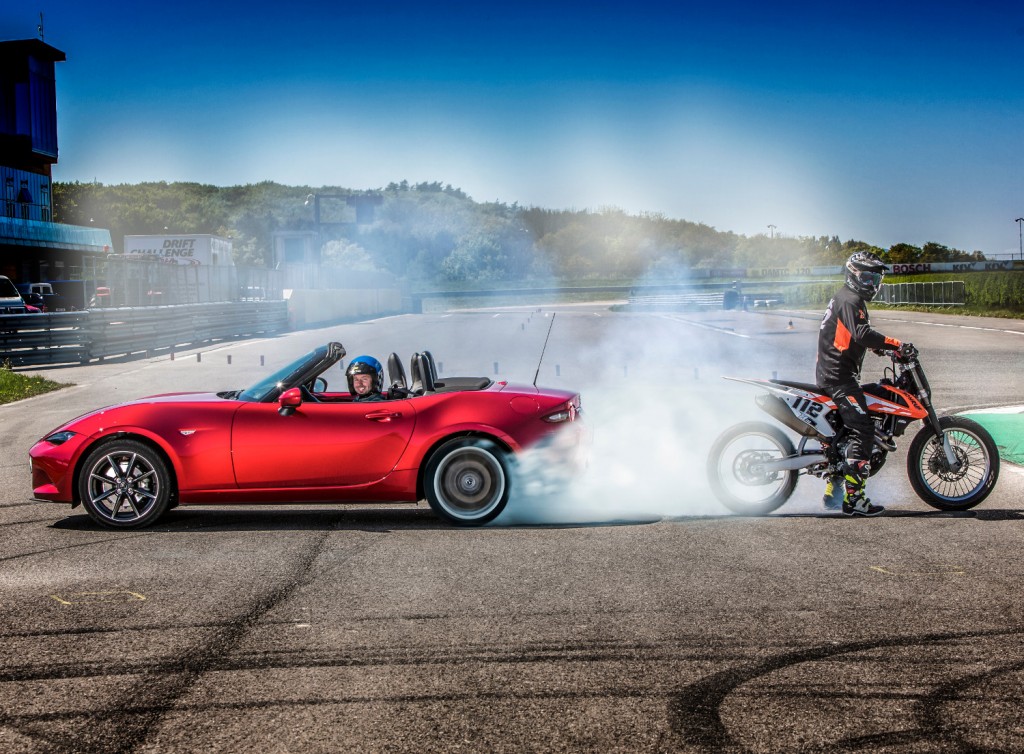 The Austrian Drift Challenge has been a booming competition for years, with the Mazda MX-5 standing as the undisputed champion. High time that the latest model is challenged to a face-off with a motorcycle then. Picking up the gauntlet for two-wheels is Hanson Schruf, a master drifter with his KTM 450 SX-F – and already sitting in fourth spot in the world rankings for the flat track world championship. A well-executed drift is a fine art reserved solely for the masters. Kicking out the back end into an elegant sideways motion, all the while holding the handlebars or steering wheel in the opposite direction and sliding round the bend in a single fluid action – that needs skill, experience and most definitely courage. Especially when precipices and unforgiving barriers stand ready to punish those who fail to stay on track.

But for those who succeed, glory awaits: No statement is more powerful than a corner mastered in one fluid drift. This has always been the case, regardless of whether you are drifting in a car or on a motorcycle.

After decades of eking out an existence in the margins of motorsport, the art of drifting has recently been thrust back into the spotlight with a blaze of passion. As far as motorcycles are concerned, it was mainly through the efforts of two-time Spanish MotoGP champion Marc Márquez and his love of flat track racing that drifting was able to break out of its American heartlands and become a respectable part of the modern European scene. Cars, on the other hand, have been able to draw in the crowds and enjoy a greater profile thanks to series such as the Drift Challenge Austria. In fact, drifting has been a sport for so long now that it even has its own official national championship.

So what would it look like if the two types of drifter now came up against each other? The timeless argument between bike and car, but without lap times or acceleration times; this time, the challenge would be to produce majestic black streaks across the asphalt.

The volunteers stepping up to the challenge are experts in their fields: Hanson Schruf has won numerous national Supermoto titles and finished fourth in the world rankings after switching to the new up-and-coming sport of flat track racing. He entered with his KTM 450 SX-F, which he converted into a flat track racer with just a few modifications. Mario Kranabetter, on the other hand, is a multiple national drifting champion and has won every MX-5 title going. For his battle against the motorcycle he climbed behind the wheel of a brand-new fourth generation model of the roadster. 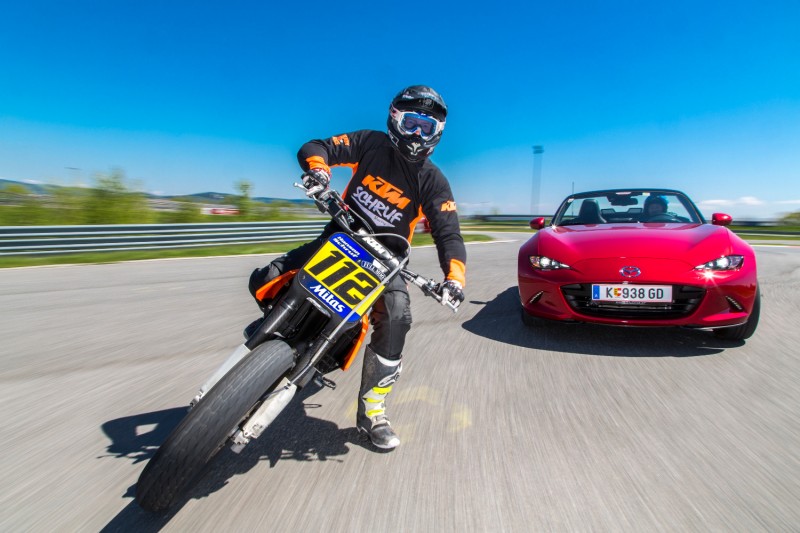 When it comes to the figures, the two challengers could not be any more different: the KTM is 106 kilos light, delivers around 65 hp and has been slightly modified for its competition against the MX-5. The front brakes have been re-installed and a rallycross tire with large studs has replaced the flat track tire on the rear wheel: “That’s to make sure it skids better.”

Mario Kranabetter’s MX-5 may be completely factory-standard, yet it is the best and most powerful version, pumping out 160 hp from a 2-liter 4-cylinder engine and featuring a Bilstein chassis, 17″ rims and a rear lock differential. Efforts to make the new model lighter than its predecessor have seen weight savings of roughly 100 kilograms, leaving the new MX-5 weighing 900 to 940 kilograms without a driver, depending on the version. Kranabetter is happy with the results: “Less weight means the car is now even more beautiful and precise to drive. What’s more, installing the engine lower down has ensured a lower center of gravity.”

Out on the track – a dry Wachauring blessed with good grip – the going is initially tough as both competitors struggle to find their rhythm and launch into a drift that takes the flying rear end round the entire bend. Yet with each practice attempt, the rear ends become more lively and the drift angle starts to increase. Ultimately each drifter faces a different challenge. The car is capable of much higher speeds, which it needs in order to build up enough dynamic force for the drift. Mario can also afford to be a little bit more aggressive and allow himself a couple of spin-outs during the practice sessions; something best avoided on a motorcycle.

Speed is not a problem for Hanson Schruf, who can kick his rear wheel out at a lower tempo. However, the conventional flat track technique – entering the bend already sideways – is not possible here on the asphalt with such extreme tilt angles. This is compensated for by mighty slides on the exit of the bend, as can be seen by the spectacular images captured on the photographer’s SD card.

Amazingly, the rallycross tire was still performing remarkably well even after several laps and no attempt to spare on the gas. “I thought that the tire would quickly degrade and spread its lugs across the track like an eraser,” said a surprised Schruf. “Instead it took only a few laps until it is was in the right condition – slightly worn but still with a sufficient profile. Now it’s perfect for a controlled slide through the bend.”

The joy on both men’s faces was clear for all to see. Smoking tires on the car and a perfect balance on the bike with movement through all imaginable (and previously unimaginable) axes show how entertaining and unmissable it can be when masters of their trade get down to work. It’s like two elegant dancers clad in red and orange robes gliding across the asphalt, practicing their quick waltz moves and following their own unique choreographies. All the while, the background music is provided by the roar of their engines.

Following the majestic performance of these two artists it would be impossible to choose a winner. But at least everybody could agree on one thing: next time, this duel should be played out on a flat track circuit.