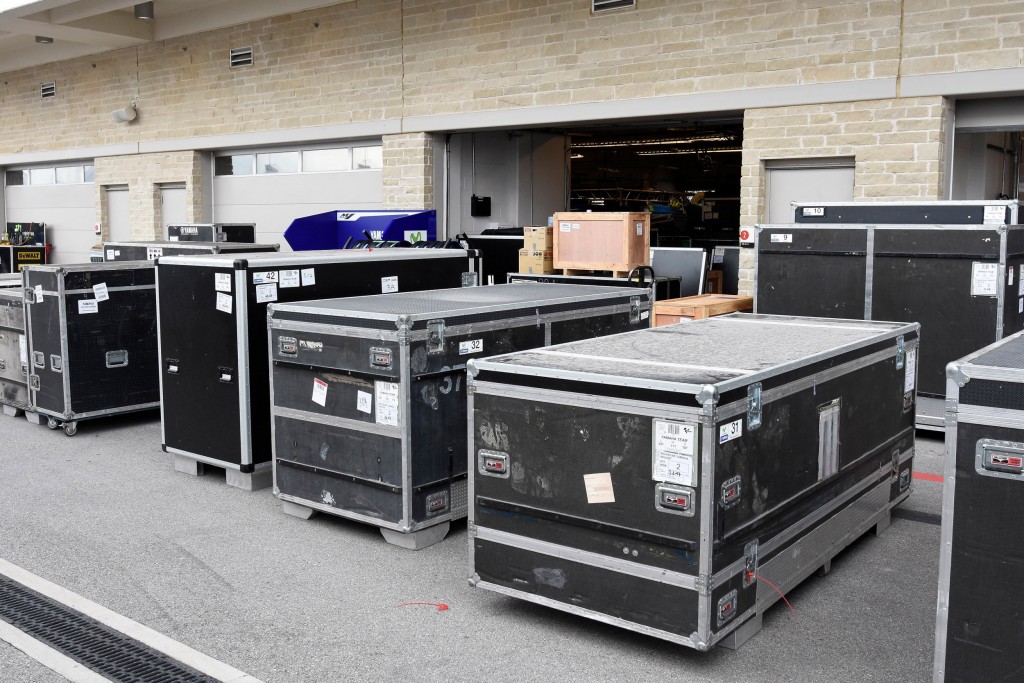 The motorcycle world championship represents a very particular group of travelers: 18 races per year, seven of which are overseas. Each time, hundreds of tons of materials and equipment have to be set up, dismantled, packed away and then unpacked again. A logistical masterclass.

Carles Jorba is the name of the man who the world championship teams entrust with their precious goods. As stated on his business card the 46 year old Spaniard works as “Operations Manager“ on behalf of DORNA, the MotoGP rights holder, and he ensures that the motorcycle world championship’s traveling circus makes its way safe and sound from one overseas race to the next. Jorba organizes long-distance travel of a very particular type; a type where nothing must go wrong. Then the show must go on. The idea that an event might be canceled because Jorba’s materials are stuck in transit is inconceivable. 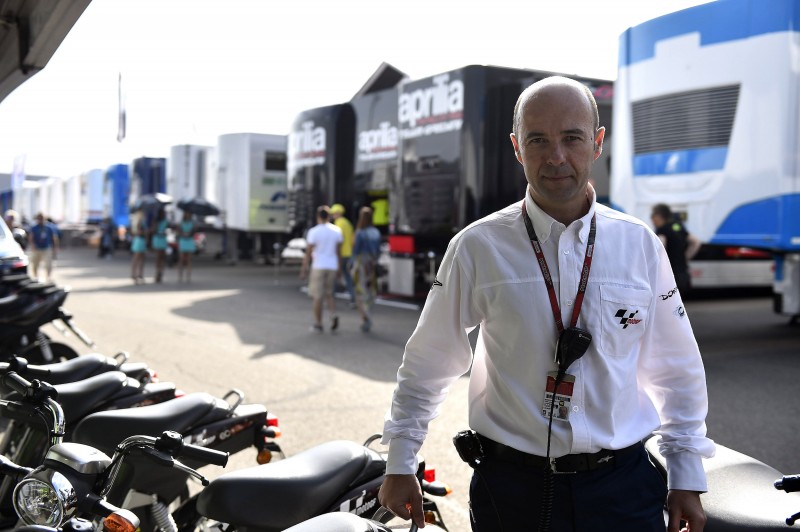 Carles Jorba’s job is slightly easier from May to September when the MotoGP cavalcade tours through Europe, with the exception of a detour to Indianapolis. This is because the teams use their own trucks to transport equipment to the races. But, each year, when it’s time for the overseas races in Spring and Autumn – this year it’s Qatar-USA-Argentina and Japan-Australia-Malaysia – then Jorba is in demand.

He then arranges for around 1000 transport cases, known as flight cases, to be packed into four Boeing 747s and flown around the world. The entire motorcycle world championship is contained in these 1000 flight cases. These include each individual motorcycle and the accompanying spare parts, the computers and tool boxes right up to the folding chair which the rider sits on when he’s talking to his engineers. Basically everything. And not forgetting the DORNA infrastructure such as the DORNA TV equipment, the timekeeping computer, the two BMWs (safety car and medical car) as well as the mobile hospital (clinica mobile). All in all, this makes up 1000 flight cases or around 330 tons and is an extremely valuable cargo. 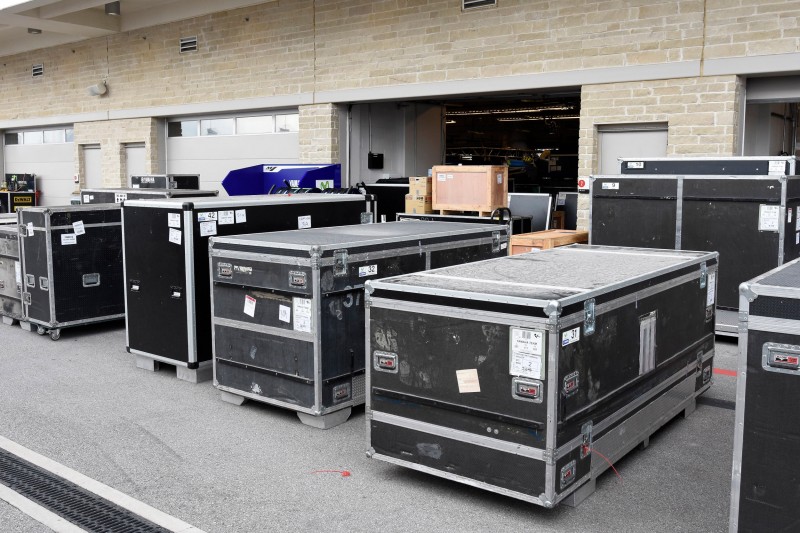 It’s the time pressure which makes Jorbas job so complex and precarious. “If two overseas races are taking place back to back on consecutive weekends, then it gets quite tense.” The MotoGP race in Austin, Texas, finishes at 2.45 pm on Sunday and everything must have arrived in Termas de Rio Hondo in north-western Argentina early on Wednesday, just two and a half days later. The trip is timed precisely and every minute counts.

This requires a degree of self-discipline on the part of the team. And do they raise a glass to celebrate a victory? Not a chance! Whether winners or losers, the major packing starts in the paddock soon after the end of the race. Everything must be in the flight cases by no later than 8.00 pm. Jorba then gets the trucks to drive in. 40 of them are on hand to transport the 1000 flight cases to the airport. It takes all night to load the trucks; the pit lane becomes the loading bay and one truck after another trundles off to the airport where four jumbos are waiting. Now it is time for transshipment. With 1000 flight cases, it takes the whole day until everything is on-board the planes. 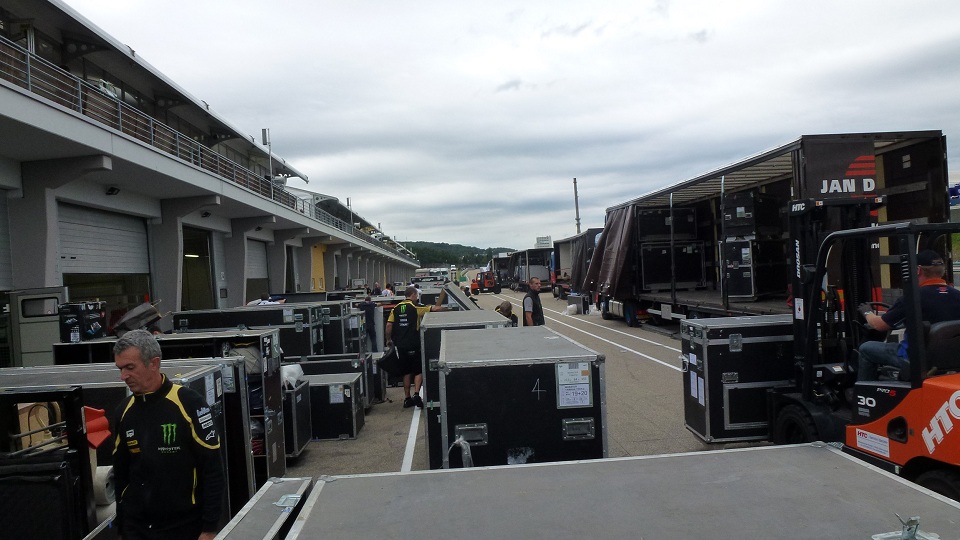 The first jumbo takes off as soon as it is full. This takes place no later than Monday at 12.00 noon. The remaining three jumbos each follow at six hourly intervals. After the plane carrying the DORNA equipment, which is always first to take off, the MotoGP, Moto2, Moto3 follow in sequence. “It has to be that way”, said Jorba, “because the MotoGP teams have the most equipment and therefore need longest to set everything up again.” The promise Jorba makes to the teams is that their cargo will be in the pit area on the next race track no later than early on Wednesday at 8.00 am. It doesn’t always come off, but it does mostly. 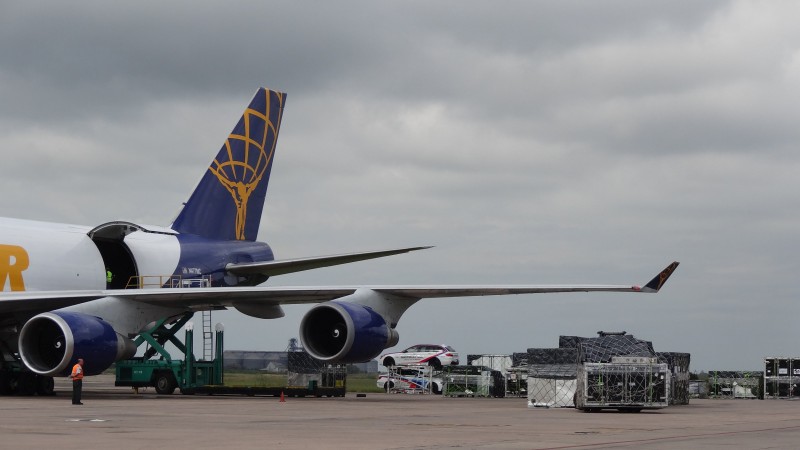 Those exceeding the limit in terms of weight have to pay. A team in the premium MotoGP class have 5000 kilograms free of charge, every extra kilogram costs. This is why the teams have to have their cargo weighed while it is still in the pit lane before it is loaded onto the trucks. Carlos Jorba is scrupulous in this regard.

A man like Jorba has his natural enemies. These would include time differences, disorientated customs officials and large distances between race courses and airports. If all three factors come together, then Jorba’s job becomes a real nail-biter. For example, the trip from Argentina to Jerez in Spain in 2014. Let’s take this one thing at a time:

“This trip from Argentina to Jerez was pushing at the limit” “, recalls Jorba. However, around 300 tons of cargo arrived on time in Jerez. So, once again, there was a happy ending.

“If the customs officials at the airport know us, it’s all a lot simpler”, said Jorba. In Melbourne, Tokyo and Kuala Lumpur, the MotoGP traveling party is well-known and the customs officers wave through Jorba’s cargo quickly. “But at Frankfurt airport or in Amsterdam”, explains Jorba, “what we get is, ‘Moto who?’, ‘Moto Geee-Peee?’” Then every form is double-checked and everything is looked at closely, sometimes even the motorcycles are examined. Jorba’s men stand around tearing their hair out because this loses them time.

The MotoGP is a fight against the clock on the circuit, but also in the air, on the road, in the airports and around the globe. These are the races in which Carles Jorba and his colleagues compete – far away from the glamor, the limelight and all the TV cameras.