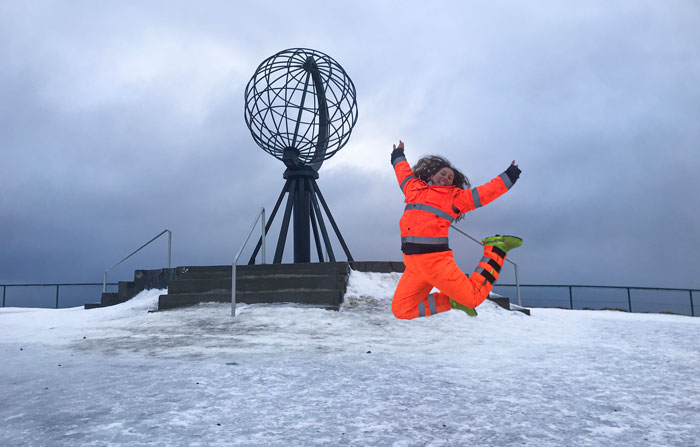 NORDKAPP IN WINTER – PART 3: WE MADE IT

Waking up in the morning to find your bike lost under a huge pile of snow, riding endless snow-covered roads while averaging 40 km/h… the winter trip to the northernmost part of mainland Europe has been a challenging one.

For the final push to the Nordkapp, we had to ride a relatively short distance of 128 km from the city of Olderfjord. With the snow heavily falling the night before, we were pretty surprised to see both our bikes were lost under a huge pile of snow when we woke up in the morning. If there was so much snow in our camping spot, we could only dread of the conditions we would find on the road.

To get as much info as possible, we went online and checked the traffic cameras along the way. We also needed to find out whether parts of the road to the end would have been blocked. Then we boiled some eggs in our camping stove and got ready to hit the road again. Those last kilometres were epic, with loads of sweeping corners and some mesmerizing sea views. If conditions would have been better, that could have easily been a perfect biking road.

Our research had informed us that those last 12 km to the tip of the Nordkapp are done in a convoy following a snow plough machine. Therefore, for our final push we decided to start very early at dusk. The planned time for the start of the convoy is at 11:00 in the morning. The road to the start of the convoy was hard so we ended up reaching that point at 14:00. Pretty certain we had lost the convoy, we headed to our hotel…

During check-in, the receptionist gave us the good news: “There is no convoy today, guys, the road is open. If you do want to reach the Nordkapp, today is the day to do so. There is a storm coming soon and the road will remain closed.” After a few moments of silence and some look into each other’s eyes, we started making plans.

We had to ride 34 kms each direction and that would normally take us a total of three hours. If we spent 30 minutes at the end point, we could make it back just before dawn. Once again, we decided to go into another unknown and that put smiles on our faces. This is definitely the way we both enjoy traveling.

The final ride to Nordkapp was made easier with us speaking over our intercom. At the end point, we were surrounded by people visiting Nordkapp by buses. They started to take our pictures as if two celebrities had arrived. We were so surprised but happy. We too took a bunch of photos and headed back to hotel.

As we reached the hotel, the storm started to show its face and, in a few minutes, chaos of flying snowflakes started falling from the sky. We repeatedly told each other that if we hadn’t made this decision, most possibly we would have never seen Nordkapp in the following days or week…

The following day, after having a rich breakfast at hotel, we saw a piece of clear sky, quickly packed up and hit the road. It wasn’t snowing, but the wind was very strong, coming from every side. Nature is sometimes merciless. The speed of the wind was 58 km/hr. At one long curvy and unprotected part of the road, the wind hit us so hard that it was difficult to stay on two wheels. It was the first time since we started this tip that we felt scared and somehow desperate.

Having achieved our main goal to reach the most northern part of mainland Europe, we were very careful to take the best way back and avoid any more bad weather conditions. Sweden and Finland are colder but protected from wind and precipitation. Sometimes we were well protected by the mountains around us, but it was not always that easy.

Plus, finding a place to spend the night started to become harder. The places on our map happened to be closed most of the time, and there were less and less villages along the way as we were heading inlands. The tent and all camping gear that we were carrying with us came into aid as we stayed in our tent in the coldest and remotest area.

It was important for us to avoid taking the risk to ride at dark. Therefore, we would normally camp before the light went out. One night specifically we got a great gift from Mother Earth as the sky was covered with the northern lights right above and around our tent. And that was one of the most epic moments of our trip.

As we proceeded south, we met with other travellers in Sweden. They hosted us in their houses and our lonely journey turned into the much more social experience that we like the most. We made good friends for a lifetime. Finally, after coming closer to Stockholm, we started to get rid of snow and ice and we decided to remove the studs from tires. From the port at Nynashamn, we took the ferry and landed at Gdansk after an 18-hour boat ride.

Poland welcomed us with sunshine, and we finally realized the scale of our achievement. We had a chance to review the whole trip. How it touched our souls and how it allowed us to improve. We once again saw that we were not letting each other down under any circumstances. We became more patient and stronger. We saw the power of Mother Earth and got reminded that we need to respect her. We were proud and emotional not only because we did this, but also because we are still safe and sound.

This trip wouldn’t have been possible without our trusty KTMs. Even in the coldest mornings they started with one push to their electric starter buttons. They didn’t have any problems on the cold and icy roads. They showed us how reliable they are. After this trip we made a very special bond with our bikes and we are looking forward to our next adventure on them. They would just need some good cleaning and probably a mini service.

A trip to the Nordkapp is on the bucket list of many bikers around the world. But the idea to make this happen during winter is a whole new experience. In our own push towards the North Cape, here’s the top 5 spots we enjoyed the most:

2. The Lapland to see the Northern lights and experience the amazing Sami culture.

3. Talinn is an awesome place to visit too

4. Gdańsk, which for us is the most beautiful Baltic city

28 Responses to NORDKAPP IN WINTER – PART 3: WE MADE IT