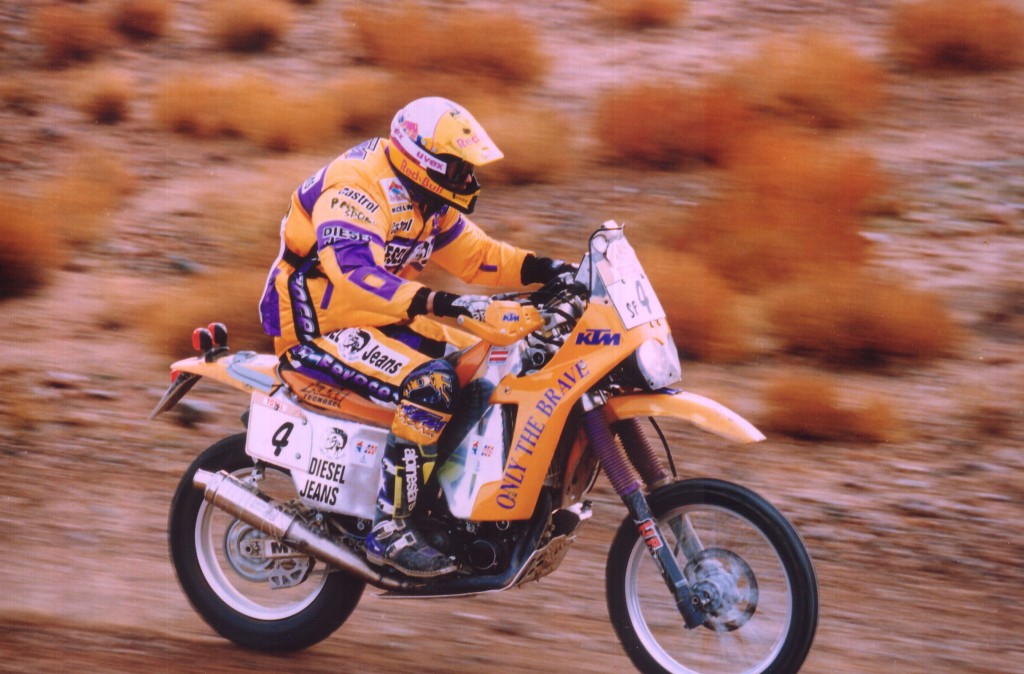 Past & present: Heinz Kinigadner on the Dakar

The name Heinz Kinigadner is inextricably linked to the most famous rally race in the world. The Austrian did not win the Dakar, he didn’t even reach the finish line in the seven versions he attempted, but the former motocross World Champion opened the KTM era in the event’s 36 year history and has been a keen follower, supporter and campaigner for the Dakar since his involvement in the early 1990s. We took the chance to note some of his views as the 53 year old always proves to have an entertaining and illuminating perspective …

On the 2014 Dakar being one of the most exciting in many years with three brands focusing on top riders, excellent team structure and advanced technology…
“Absolutely! We had a meeting with all the guys except from Chaleco only a few days ago in Mattighofen. It was very nice and everybody is aware that 2014 is a big one and a new step for Dakar. In the last twelve years it has been KTM’s and it would be quite clear who would win. It created some difficult situations inside the team because we, as KTM, were not in a position to take a clear direction. If Marc was complaining then it was against Cyril and vice-versa so we had to take a step back and it was not easy for everybody involved in that KTM entry. We were not really out there fighting the others, but against ourselves.”

On his personal memories of the Dakar…
“I remember starting to push KTM towards this race and almost everybody inside the company at the time thought I was crazy because they said the bike was not built for such long distance rallies but from the beginning I really saw the potential of the Dakar. It happens at a time of the year where there is no other motorsport, that motorcycle riders are thinking about what to do and that the coverage showed pictures and images that you couldn’t really see or find anywhere else.“ 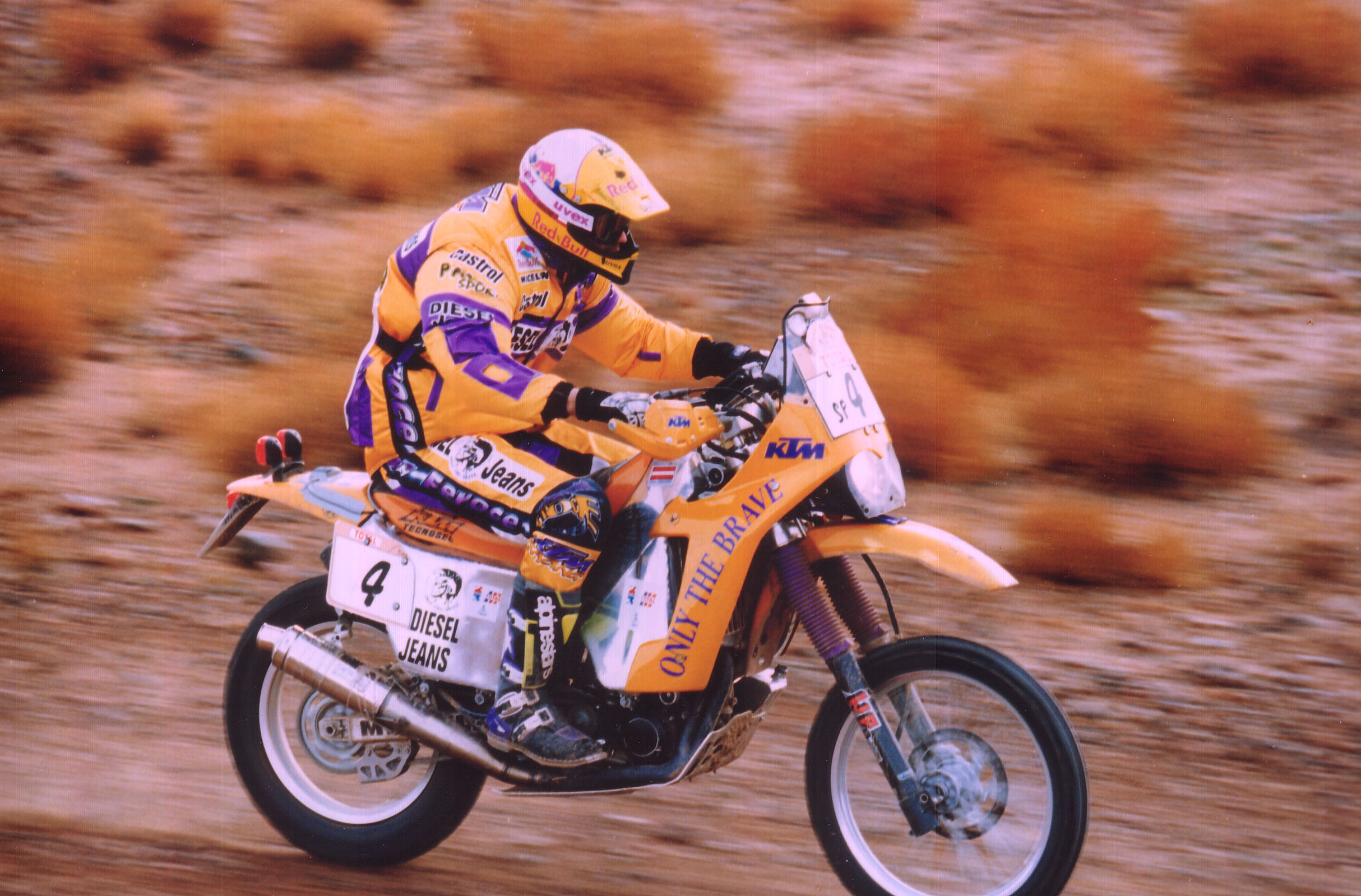 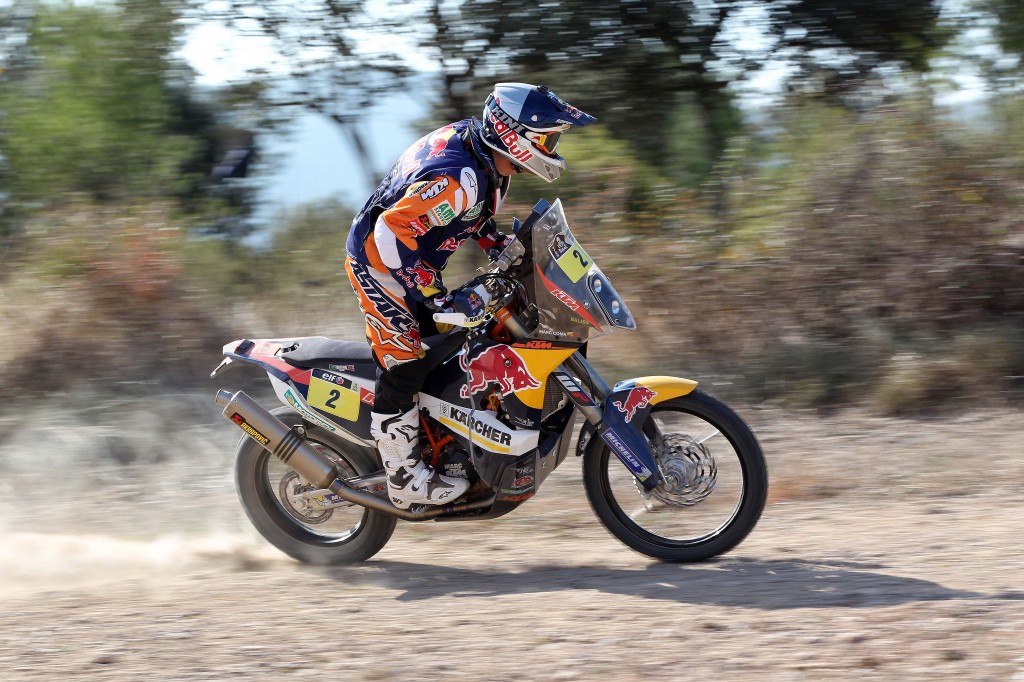 It was more like an adventure than high level sport, even though inside it is very much like that. It was another dimension for KTM customers and moved the company up another level. Even this year for example our Adventure bike – which is one of the most modern – was our best seller and we had a window already made for that product. Anyway, it is true that I started the Dakar with a bike that was not really ready for those long distances! So there were technical problems. Four times I stopped because of those and another three through crashing after other technical problems! I was not that young when it came to racing the Dakar but it was hard for a hot motocrosser to find the balance between safety and speed and I was not really looking for it because for me it was the biggest adventure you could have. The Dakar was reassuring because you have helicopter and emergency radios and so on; safer compared to riding on your own in the desert. The Dakar is still f*^king dangerous because when you are doing 600-700km per day keeping your concentration up for two weeks then … well, this is one point that scares me a lot. Since KTM went into Dakar in 1992 until today then all of our bad accidents with factory riders – with the exception of Pit Beirer – have been at the Dakar or in other Rallies. It is a wonderful sport but it is also very upsetting when you losing your friends.”

“I remember starting to push KTM towards this race and almost everybody inside the company at the time thought I was crazy because they said the bike was not built for such long distance rallies but from the beginning I really saw the potential of the Dakar.”

On a specific Dakar recollection…
“If I think back to my first Dakar there was no GPS. In the second they started with the simple ones and this was when we were able to input as many points as we wanted. There were no maps just points, so you could see shorter routes but you never knew if there was a mountain to cross, a river or sand dunes. Sometimes we took those risks and went to cut those routes that saved 15km or whatever. Sometimes you could make it, sometimes not. But if you did it and crossed a difficult area and took something like 20 minutes on the boys then these were special and nice moments. KTM has been part of the Dakar for twenty years now and the first ones we did were without support trucks or any organisation and without a bike that was really ready for that race. It was like going into war. When we saw the outcome in terms of media and coverage it was crazy. I have to say that my two world titles in motocross were almost nothing compared to those days at the Dakar, media-wise. Everybody in Austria seemed to have been watching it. Dakar is a two-week hit and if you see it for two days then you know it will be on the next day, and the day after that. The Motocross championship would stop and start because of the dates and you’d lose connection. I was surprised. I flew to Vienna afterwards and every taxi driver and even people in the street were saying ‘hey! You’re the guy from the Dakar’. I did so much more work for my world titles but the Dakar was so much better for exposure!”

“I did so much more work for my world titles but the Dakar was so much better for exposure!”

In why people go back to the Dakar…
“People have called me a crazy motorcyclist with his brain clicked off but if you are part of something or a scene then you understand why you do it. When I was a motocross rider I did not even watch those rallies. I thought ‘this is not real sport’ but when you cannot do something at the top level anymore then you look around to see where else you can be good and I made a big discovery. To be able to ride through landscapes where people haven’t been – only helicopters – is wonderful. One time I was going through the desert with a friend of mine, the boss from Red Bull, and he said to me ‘I feel like John Wayne!’. It was amazing where we were. And this is the point. Personally for me it had a big impact because I am from a mountainous region so to see all of that hugeness was a big thing! You could just ride and ride for 2000km. The combination of that and controlling a motorcycle on the limit where there is so little room for error – you come around a corner with centimetres to spare and you know nobody else can do it quicker – it is a special feeling and brings you into a kind of ‘flow’. You feel unbreakable and unbeatable and that you are the best. This is the racing aspect. Match it with the adventure and there you have it. On the bike I have crossed South America from Peru to Rio. I have gone from Paris to Moscow to Beijing. Across Australia and the first Dakar for me was from Paris to Cape Town. For me it was a way to see the world and to see places that I never would have been.” 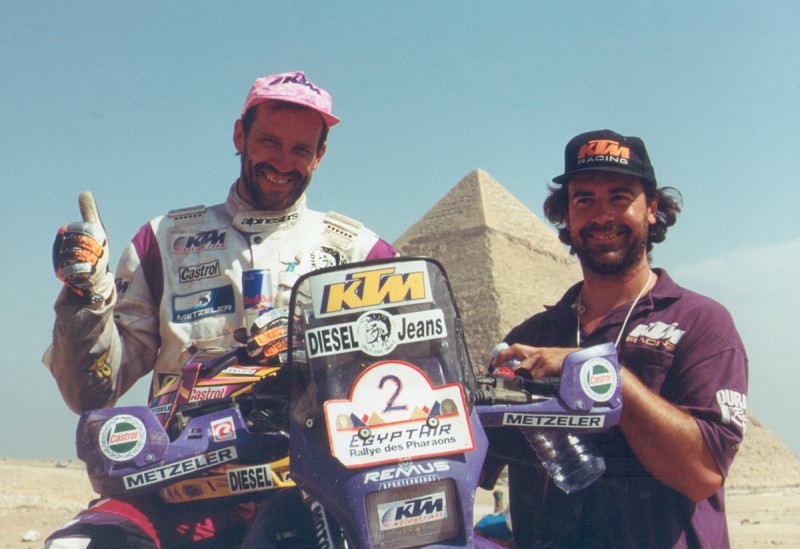 Winning the ’94 Pharaoh’s Rally with mechanic Fernando. Living the Adventure

“To be able to ride through landscapes where people haven’t been – only helicopters – is wonderful. One time I was going through the desert with a friend of mine, the boss from Red Bull, and he said to me ‘I feel like John Wayne!´ […] And this is the point.”

On the relocation to South America…
“For the Dakar South America was a big ‘win’. It is massive there now and it is starting to grow in North America, which was not always the case in Africa. North America is a big market for the manufacturers. The website mentions three-four million live spectators and that is a huge deal. I do not think it will come back to Africa. Africa is limited because it is not so safe away from the coast. The whole format of the race seems to be changing and there are more motorhomes and families involved now. It is a very, very different event than when it was in Africa. When you were going through Mali you might see a little town and then know there was nothing else for 800km; you had that feeling of being totally alone. In South America it is a bit different and Marc Coma and the guys told me that if you don’t see a building or hut with spectators for more than five or six kilometres then you have taken the wrong way! Anyway, it is great and an important race for all of us. Maybe in the future we can have two versions. One that is more like the old-style Africa and one that follows the newer version. If you see the bikes now then KTM with its 450 RALLY and Honda are producing some great stuff. I think if you gave it to our MX1 World Champion Cairoli he would make some decent lap-times on a motocross circuit; the handling is that good. They are different now from the ‘big ships from Africa’ – as we used to call them – that were made for going flat-out in a straight line.” 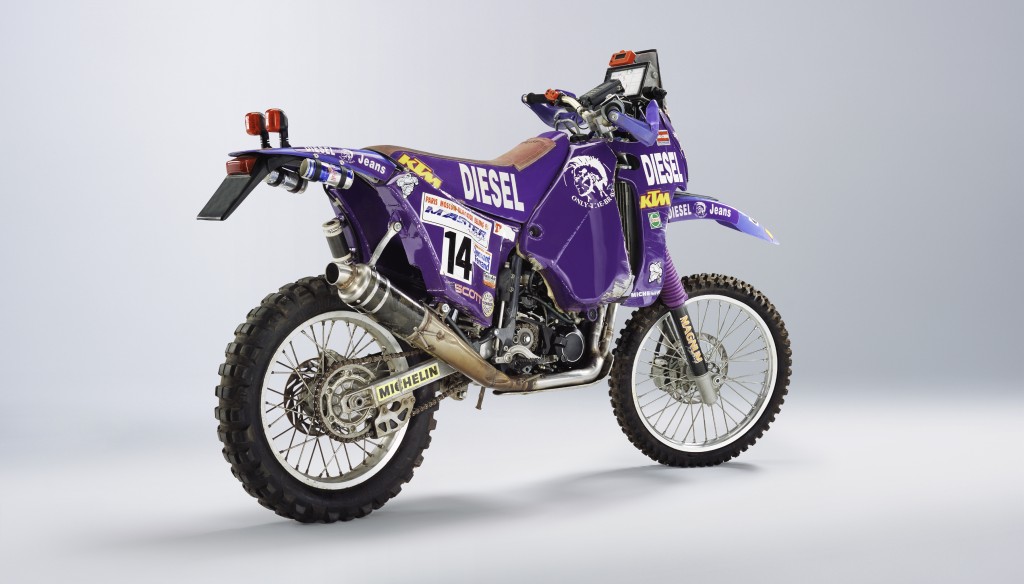 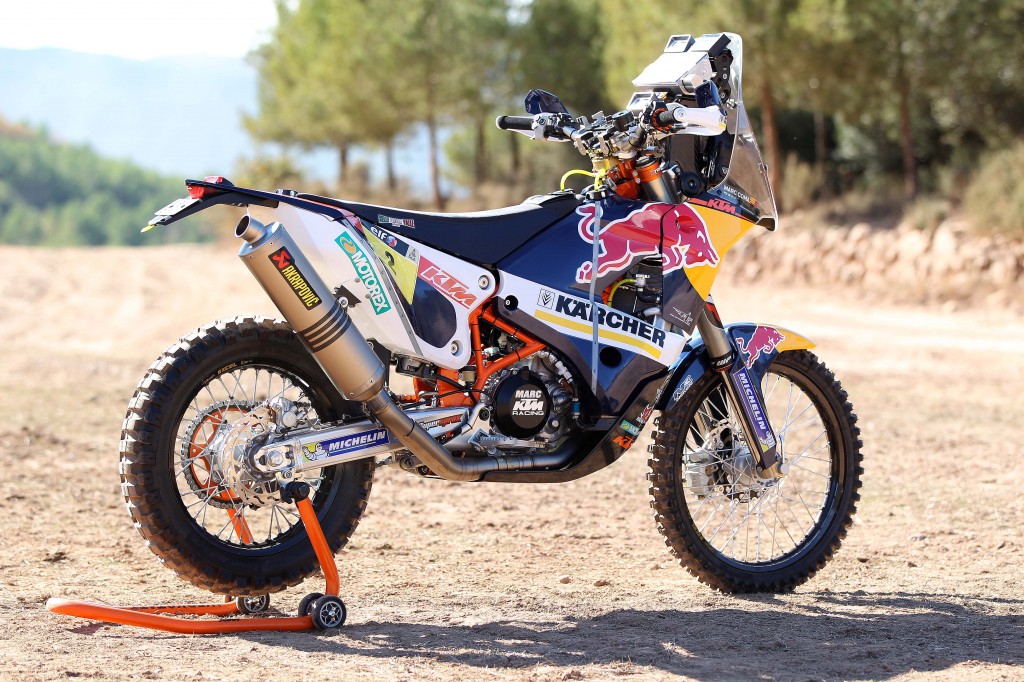 “For the Dakar South America was a big ‘win’. […] The whole format of the race seems to be changing and there are more motorhomes and families involved now.”

More information on Dakar 2014: Dakar Newsroom
Click here to sign up for the KTM Newsletter and Results Service.

75 Responses to Past & present: Heinz Kinigadner on the Dakar