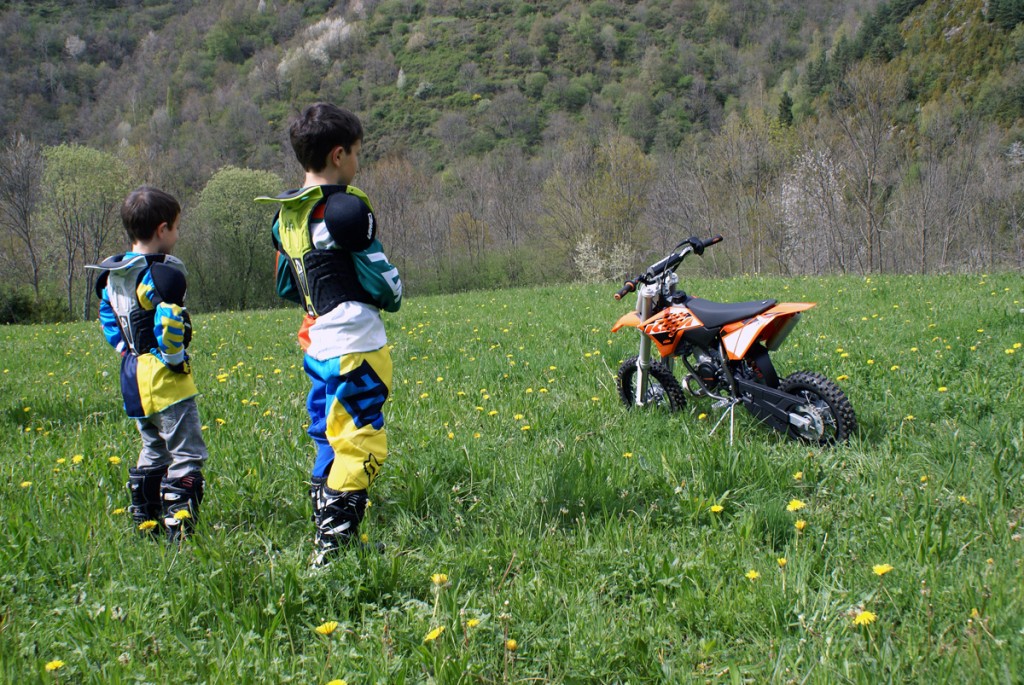 The First Time: What happens when you introduce kids to two wheels and an engine?

When is the right time? When can we – as theoretically mature, responsible and considerate parents – expose our offspring to one of the delightful sensations in life that is motorcycling? For an adult already immersed or hooked on the pleasures of being on a bike – a feeling somehow never fades or gets boring – then the desire to share that emotion is natural; the same as countless parents and children that bond through sport, teams, fandom, pursuits and so on.

I was always keen for my two sons – Alex, nine years old in October and Jordi, six – to know what it was all about. They have been surrounded by bikes and racing all of their young lives due to their Dad’s chosen profession. And there was also a weak ulterior motive. We reside in Barcelona, a metropolis where it is estimated that almost 300,000 motorcycles/scooters inhabit the streets making it one of the densest cities in Europe for two-wheelers. It’s logical to assume that at some point in their adolescence they are going to get on the road whether in control of their own vehicle or somebody else’s. So why not establish a base of skills at an early age? Like an understanding of what it takes to swim, volley a football or ride a bicycle. Ah … pedal power. A grasp of the dynamics and balance needed to get on two wheels in the first place was the absolute requisite before I could even consider making a call to KTM to acquire the temporary use of their smallest junior model, the KTM 50 SX, for this little inauguration. 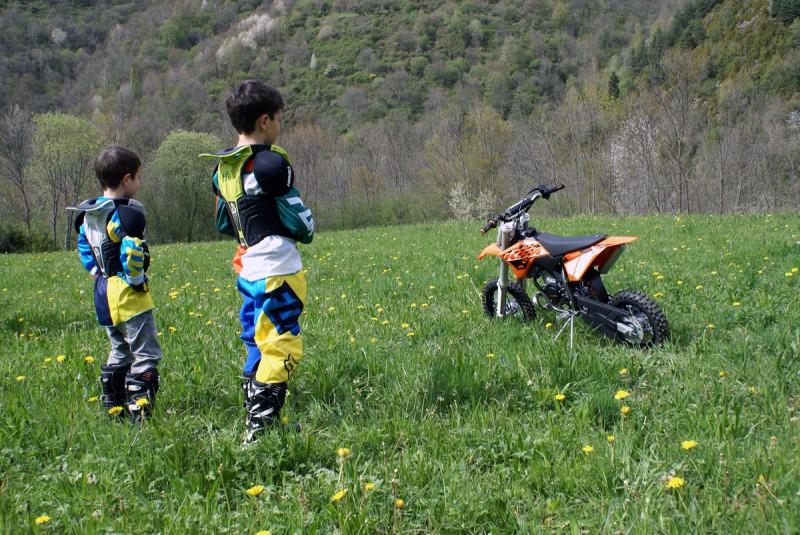 Happy that both Alex and Jordi could handle their bicycles meant that wheels could be put into motion, so to speak. FOX kindly supplied some fetching kit (although the pants, like most trousers for his skinny frame, were ridiculously big for Jordi) and Leatt have a superb form of protection with their Fusion neck brace and body armour combo that wrapped nicely around their torso and shoulders and held fast. At first it seemed like the protection would be a bit too heavy but the boys had no complaints. 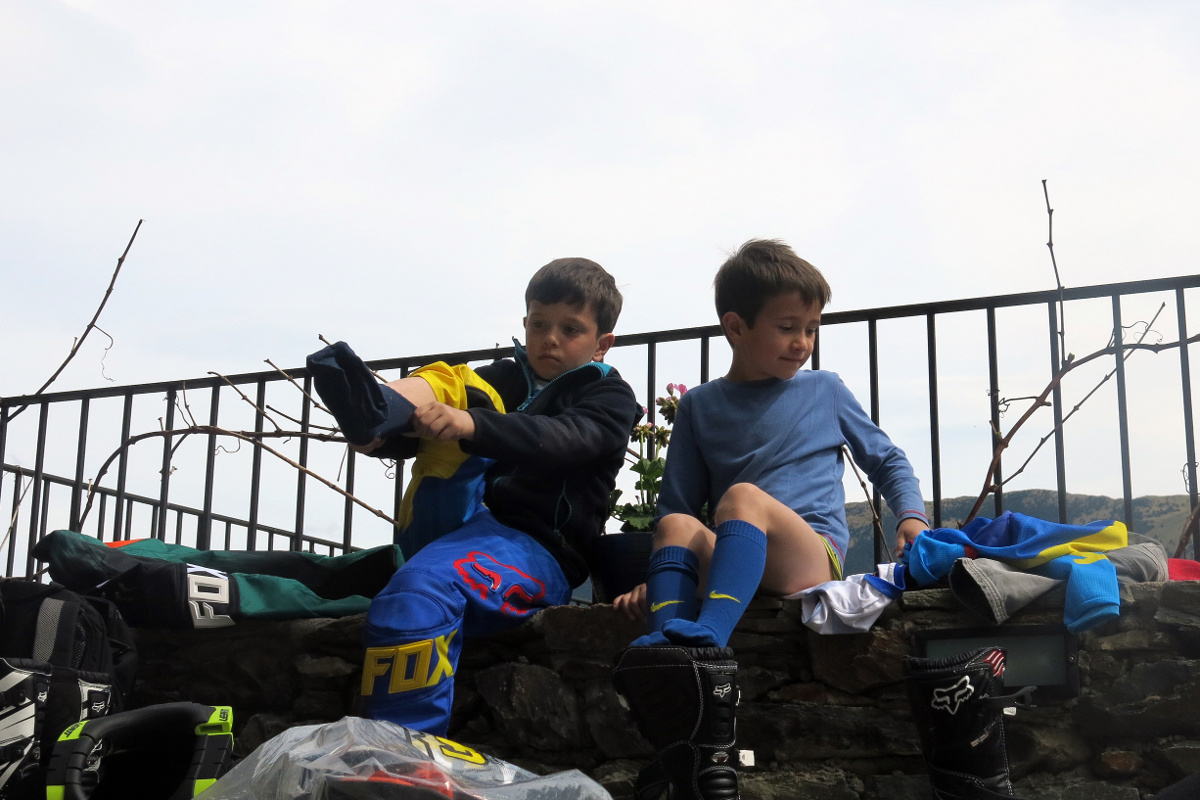 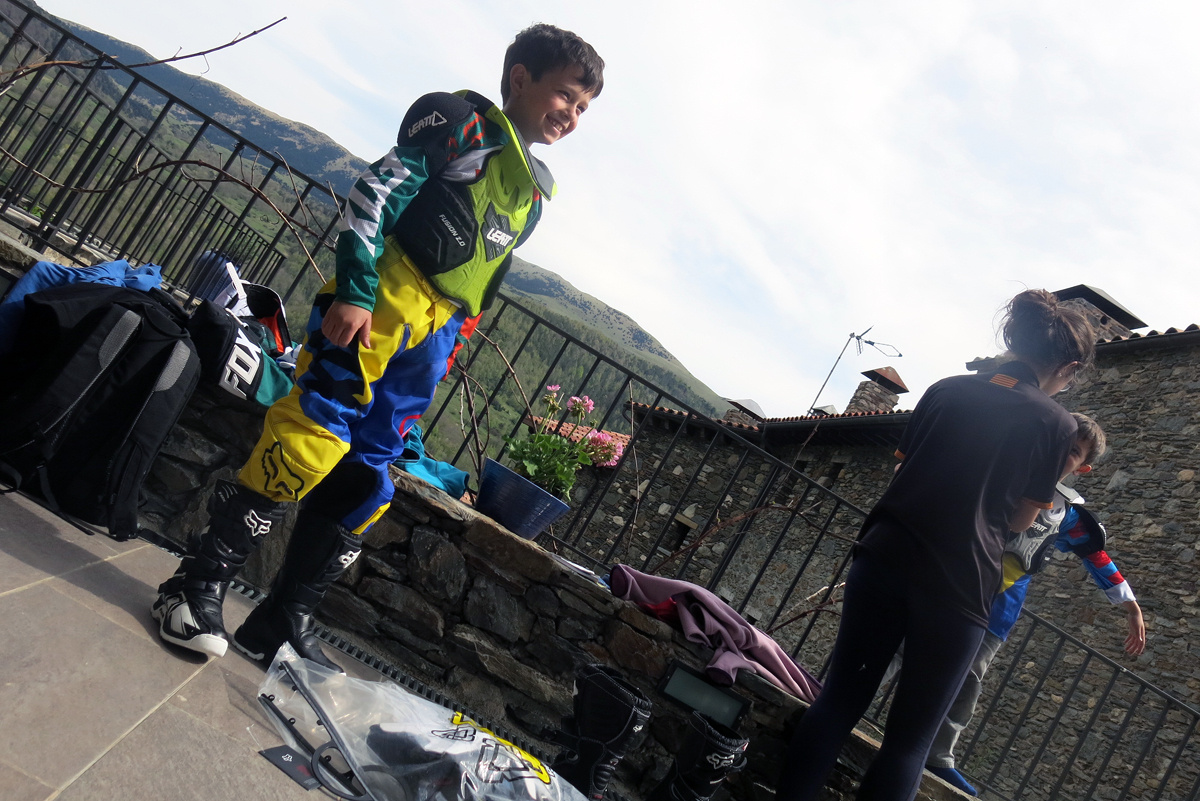 The 50 SX arrived via the busy folks at KTM Spain and the 2015 model was a sumptuous replica of bigger brothers with Renthal bars, black rims and a racing aspect that had me wondering whether this would be the gentle introduction to motorcycling that I had envisaged. The boys had been anticipating their debut for months; right through the winter in fact the question of when ‘their’ KTM would arrive appeared frequently despite the accompanying looks of concern and bare-borderline approval from their doting mother. Nuria’s family home on the foot of the Pyrenees meant we had a generous pick of green valley settings in which to start the engine of the 50 SX.

There was a problem for Jordi at the outset. The little man could not touch the floor and the heaviness of the bike (40+ kg) already had him in doubt. The six year old was game, but wisely decided to let his brother go first. The excitement and nerves ramped up when they got their kit on. Both had tried the FOX gear and helmets and goggles several times as it sat in their bedroom but this time was the real deal. 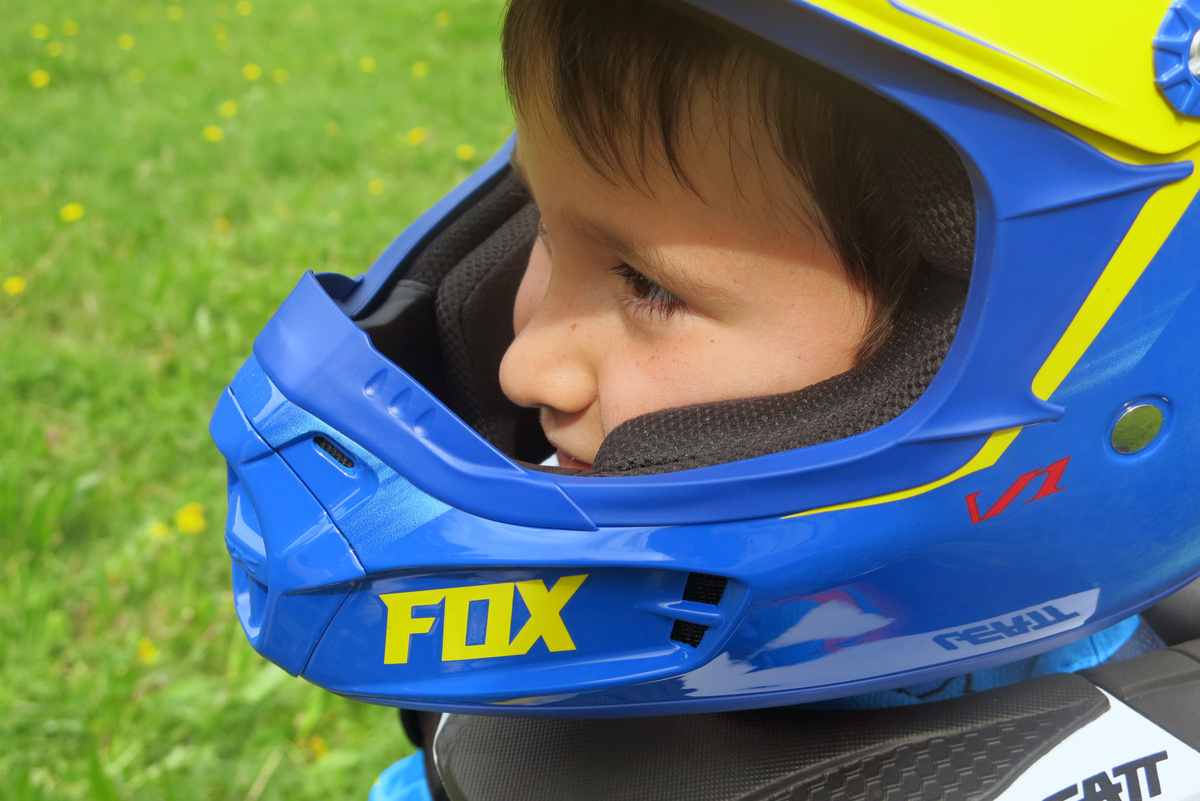 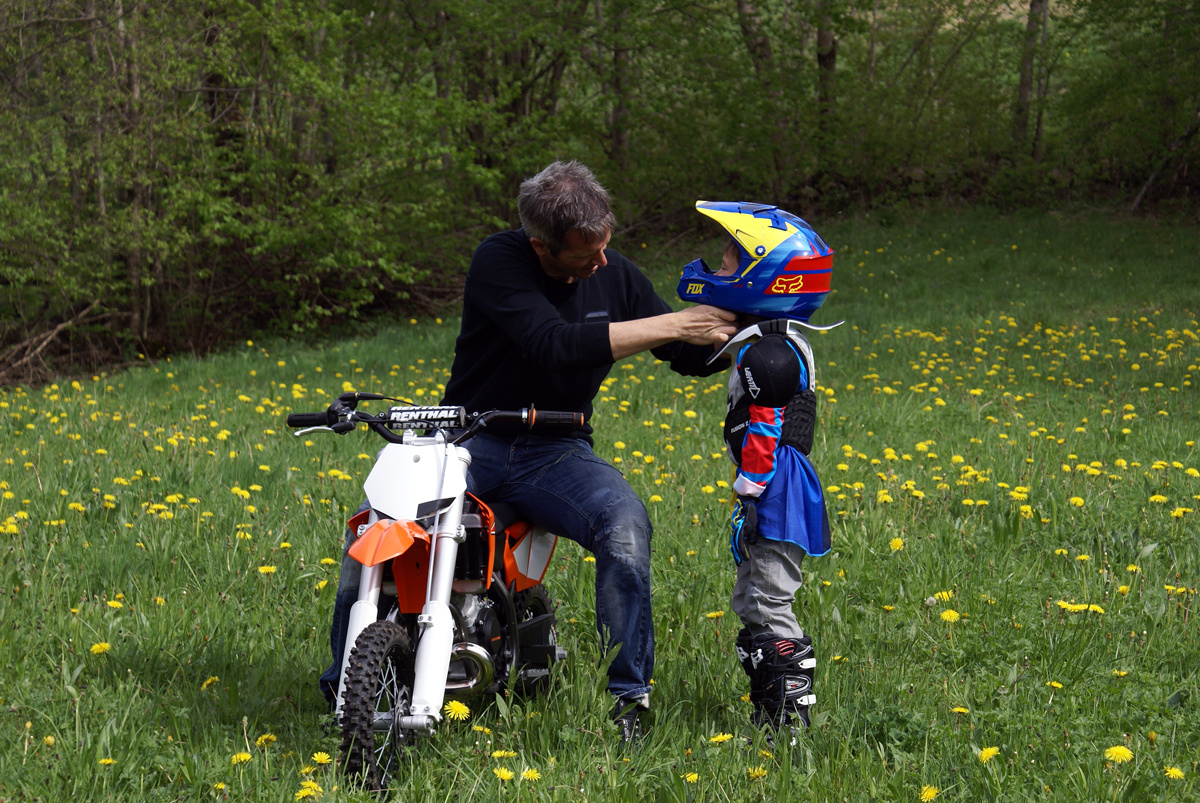 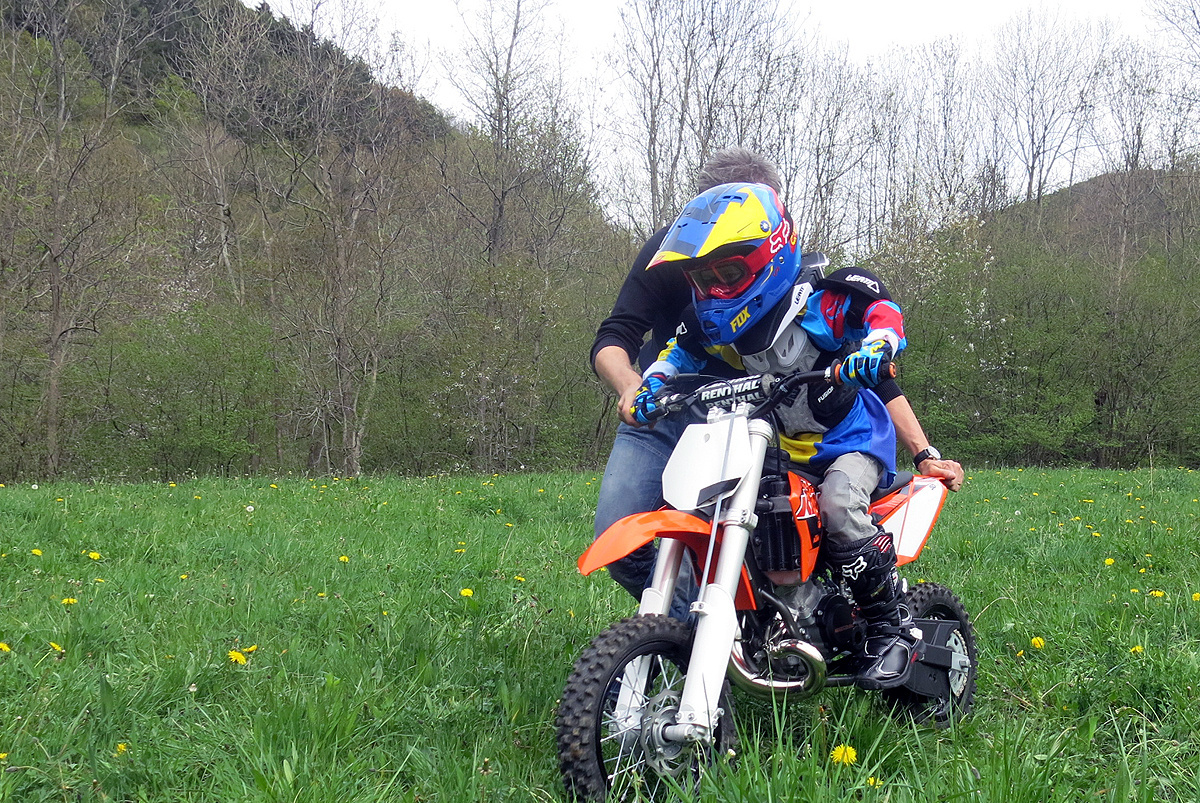 The first obstacle in their discovery of a motorcycle was the weight. I could see they had the familiar sensation of the balance needed for two wheels and obviously the bars and front brake. The rear brake lever was totally new encounter. I started by pushing both boys down the field – that had a gentle incline and lengthy grass to provide some learning ‘assists’ – and getting them to brake. It was cloudy and humid so I was the one working up the sweat. At first I wasn’t allowed to let go of the rear fender but then Alex was soon confident enough in his ability to brake and stop a freewheel.

Next, the engine. Kickstarting the bike was a tall ‘ask’ at this stage, so I fired the engine into life each time. It was at this point when Jordi felt uncomfortable and decided to spectate the rest of the afternoon. The two-stroke howl was intimidating for a small person even if the power fed-in quite gently with a modicum of throttle control. He had a go, assisted, and felt unsure of keeping the bike in controllable motion and also being able to wheel to a halt. In retrospect Jordi would need a PeeWee or the 50 SX mini version at his age and height.

In contrast I was amazed to see Alex pick it up so fast. He would ‘kangaroo’ in a straight line to his cousin, Clara, and stop. I’d turn the bike around and he’d go back the other way. He was hesitant with each new step but gave it a go and visibly gained confidence by how he could control the speed of the bike with his right wrist and was respectful of the gas so as to not go totally whiskey throttling off through the field. He soon made his first turn and in a period of twenty minutes was running his own large loops through the grass. More than anything I was proud of how quickly he conquered the fear and also seized the feeling of fun from going reasonably fast simply through a bit of equilibrium and throttle work. For the first time in his life his brain made a connection between right hand and speed and he started loving it. When he stopped for a breather I asked him how it felt. “I was scared in the beginning and I did not want to go on down the hill and break a bone,” he said, obviously hearing too many motocross stories and updates from me. “It was very exciting.” 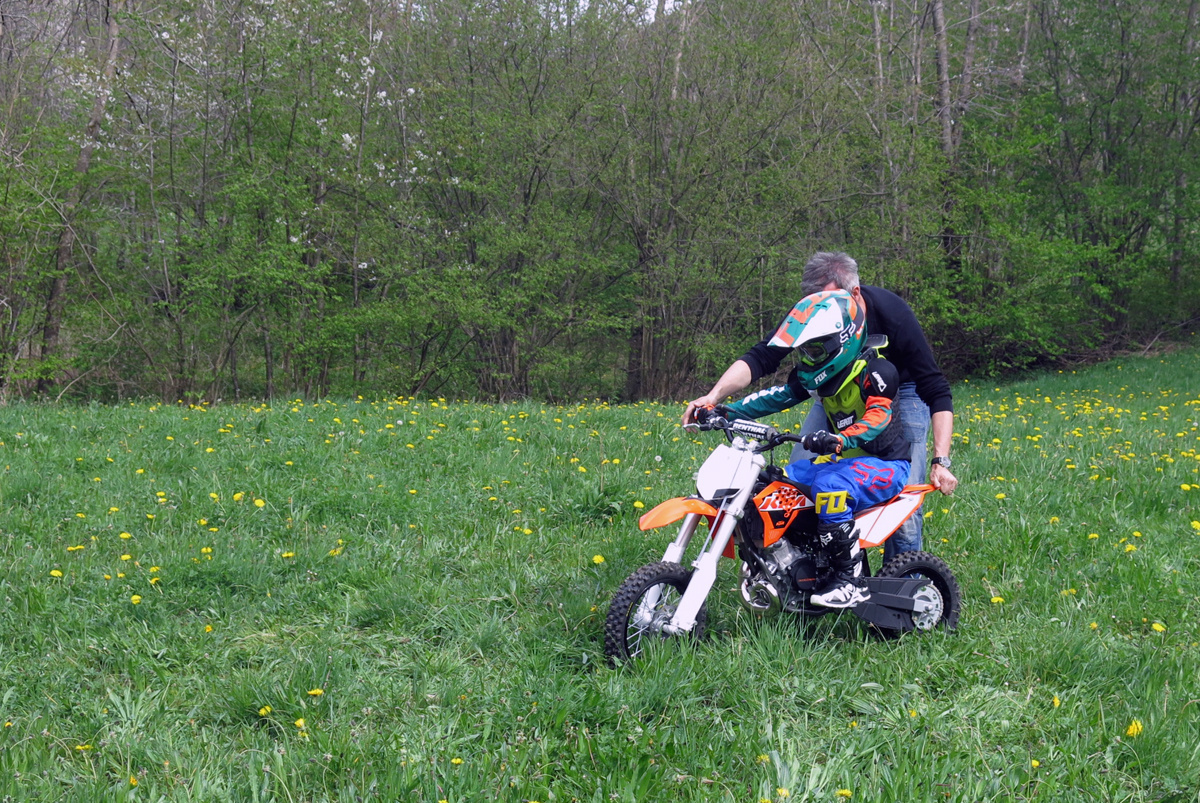 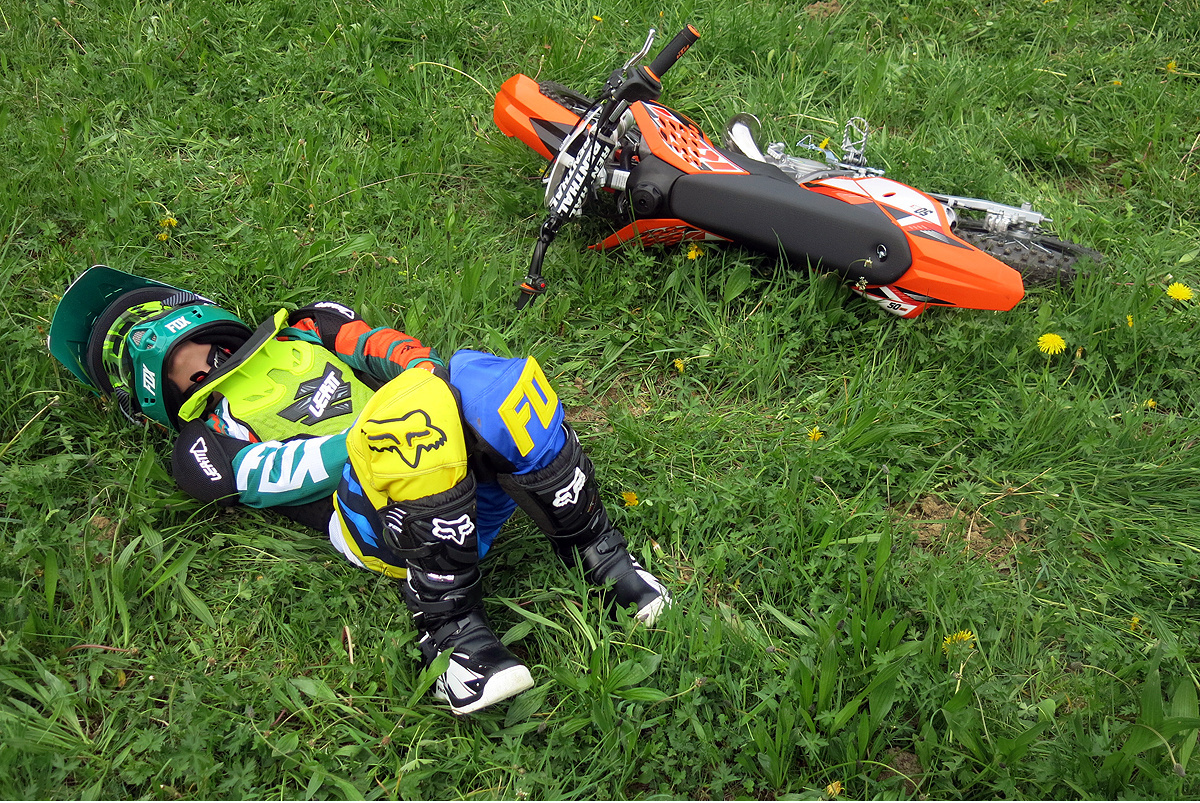 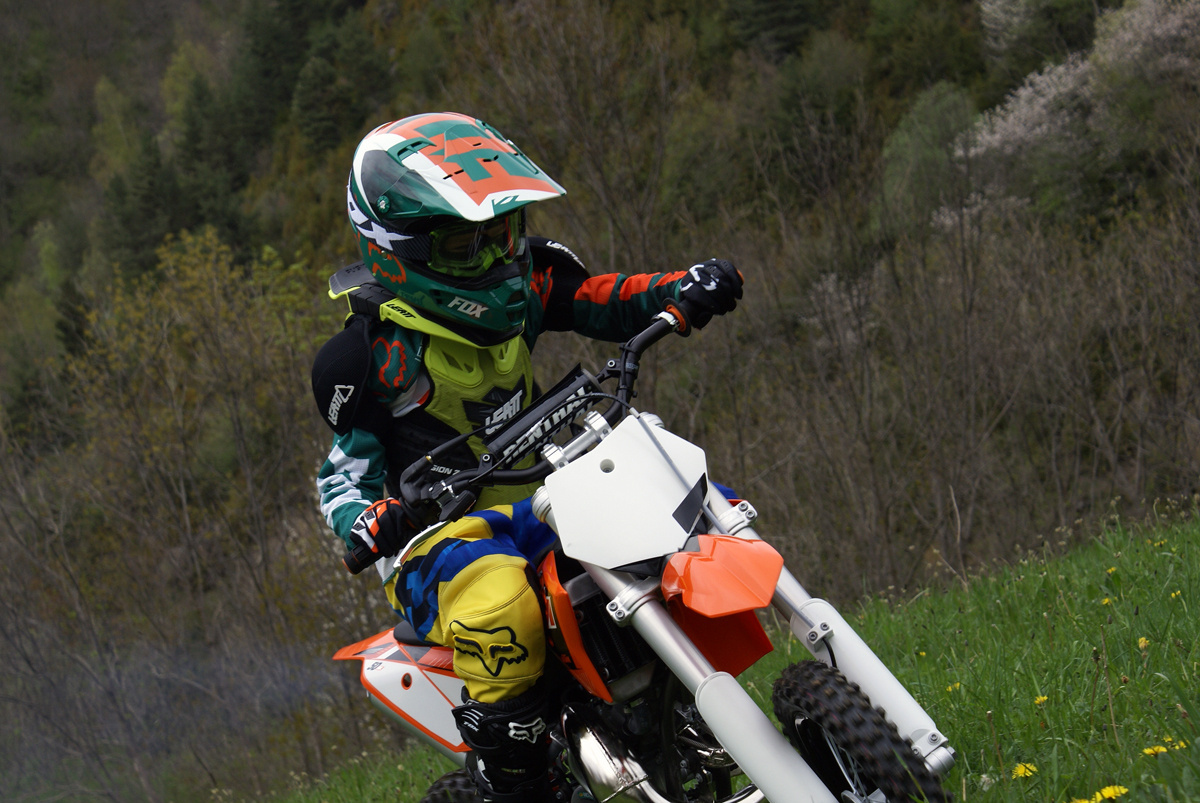 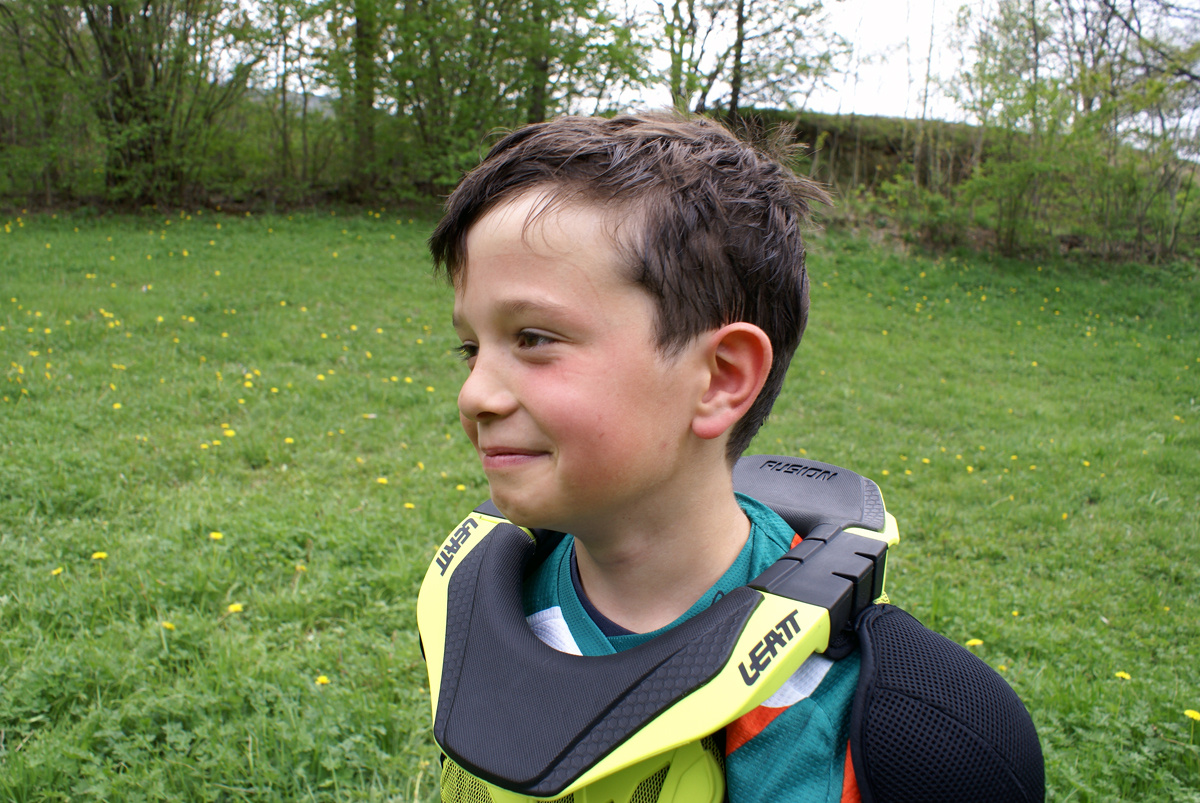 Soon the 50 SX wouldn’t start. A quick opening of the fuel cap and a shake of the bike confirmed we were down to our last drops and the debut was over. On the five-minute drive – with the KTM loaded in the back of the car – returning to Pardines I could sense that Alex felt like he had grown a few inches. He made a couple of comments along the lines that his friends at school would not believe how he had spent a small chunk of his weekend. We’d even have to print two photos, one with him dressed without helmet and an action pic so that they would be able to see it was actually him in the saddle (since when did kids get so cynical?!). The aura of relief and satisfaction was only tempered by the fact that the boys knew the 50 SX would be on its way back to Austria after their one outing.

We read incessantly about the many barriers to motorcycling in the twenty-first century: the environmental concerns (especially for offroad), road safety campaigns, rising insurance premiums, credit difficulties, the convolution and cost of acquiring an uninhibited licence. One of the overriding feelings that came out of Wheeler boys’ ‘baptism’ is that motorcycling – above all the barricades – can still count on its raw thrill. The buzz of actually doing it. So many people have tried to articulate the sensory joy of riding from icons like Steve McQueen to unequivocal masters like Valentino Rossi but there is something about the look on a person’s face that has tried it for the first time that doesn’t really require description or oration. I could have sworn that at sometime, somewhere Alex glanced at me with an expression of ‘I get it …’ And people still do, according to government figures apparently 46,000 motorcycle tests were done in the UK last year alone. 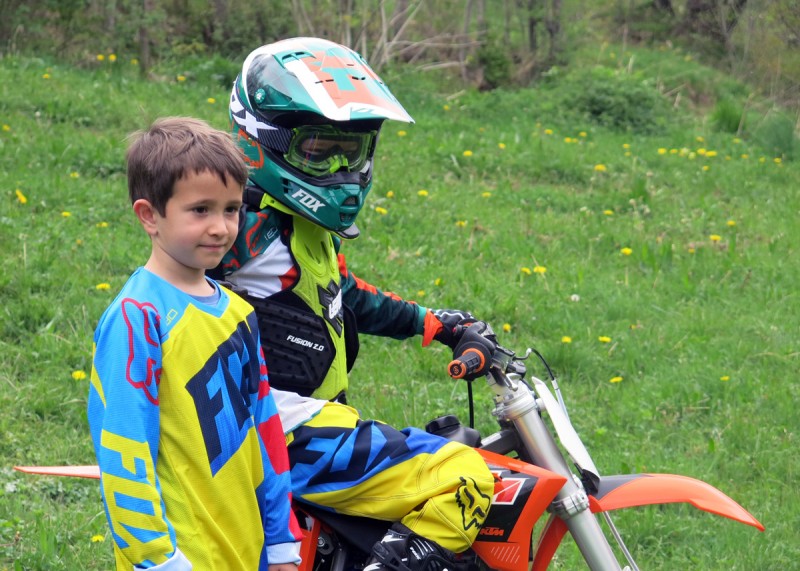 A fitting cliché to conclude this piece would be say that Alex was bitten by the bug but being a sensitive and happy eight year old he was later excited by an ice cream he was going to eat and a packet of football cards that could potentially add to his collection.

I have no doubt that the seed has been planted however. Having access to a motorbike was a very unusual treat and one that gave him and Jordi another little fresh experience in their lives in a time when so many things will be new. As a parent you want to give your kids a wide scope on what life and the world has to offer (there’s your cliché) and the 50 SX was another introduction into what there is to look forward to. Perhaps we need to try again with a 65 SX …

81 Responses to The First Time: What happens when you introduce kids to two wheels and an engine?