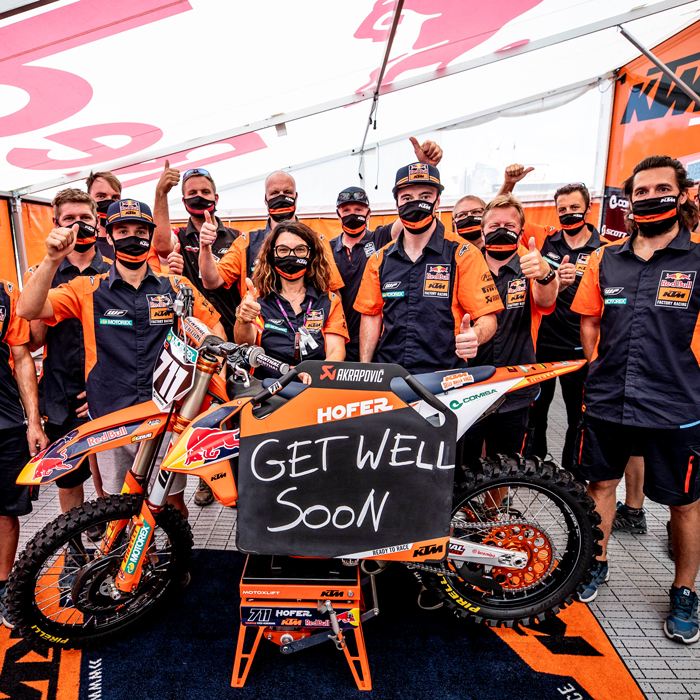 THE HURT GAME: RECOVERING IN MXGP

Red Bull KTM Factory Racing lost two of their five Grand Prix athletes to injury during the intense and condensed 2020 FIM MXGP World Championship. What happens when Pro racers are forced away from the track? We asked Jeffrey Herlings and Rene Hofer to check in from their sofas…

Jeffrey Herlings is familiar with the peaks and troughs of his sport. Four world championships and the third highest total of Grand Prix wins by the age of 26 means the Red Bull KTM stalwart, with more than a decade of world championship experience, has been through the crash/injury/operation/rehab/recovery/return cycle repeatedly.

Herlings has interspersed results that have made him one of the greatest riders in the history of the motocross with problems that have caused a degree of absenteeism. In 2010 (his debut season as a 15-year-old), 2013, 2014, 2015, 2019 and 2020 he has kept surgeons busy with various reparations. Amazingly, from of all the substantial injuries Herlings has suffered (a dislocated shoulder, three broken collarbones, a broken femur, little finger, dislocated pelvis, two broken feet, fractured vertebrae) all except two were sustained while he was holding a championship red plate. It seems like it is all or nothing with #84.

While leading 2020 MXGP the Dutchman crashed during Free Practice for the Grand Prix Citta di Faenza in Italy. The neck and back injury effectively ended his bid for a fifth world crown as he had to sit out the next four rounds. “This one was easier to deal with…but it was still tough,” he says now, and after a subsequent process to repair complications from his foot operation from 2019. “That one last year was ‘OK’,” he references “because the championship hadn’t even started but I was leading with such a big gap in 2014 and 2015; I guess 2020 might count as the third championship I’ve chucked away. If you look at the math then it doesn’t add up: I’ve won 90 GPs but only four championships.”

“I’m definitely devastated but when you are on the ground and you don’t have any feeling in your body for half an hour you are just happy to walk away,” he adds. “The results don’t really matter. You are just relieved to be healthy, and now I don’t have any pain in my back or neck. Every setback is difficult, but the sport is moving so fast, the bikes are so fast that you are just waiting for it to go wrong. That is part of the sport and we have to accept it.”

In contrast to Herlings’ 11 seasons and plethora of races and trophies, 18-year-old Rene Hofer is at the beginning of his story. The Austrian had already found the top five of the MX2 class before the Covid-19 pandemic struck. Upon resumption of racing in Latvia in August Hofer hit a jump awkwardly at the Kegums circuit and landed on his right side, breaking his shoulder. After a visit to the operating theatre Hofer has been working through his own rehab.

“At first the doctors thought the shoulder had popped out. They tried to put it back in!” he smiles and half-grimaces at recollection of the accident. “The bone broke close to the shoulder. The first x-rays looked quite horrible. The bone was stuck in the muscle and the doctors had to do some good surgery! It feels good now. I was able to train properly for the first time at the beginning of October and that made me really happy. I still don’t know how it broke. I threw the bike away while jumping and after that I don’t know how it snapped.”

Hofer is younger than Herlings but has had his own bitter taste of losing a potential title when an accident during an ADAC MX Master event in Germany in 2018 ended his year while leading the EMX125 European Championship. “2018: That was harder to deal with compared to this year,” he reveals. “The Covid break meant that this season didn’t feel ‘real’. We’d only had two races. In 2018 I was on my way to winning the championship so it was heart-breaking. I was younger then; it was much harder to accept. This time the first two weeks were tough but I think overall it was mentally easier to come to terms with.”

The darkest period of motocrossers’ careers tend to come in that void of ‘lost time’ post-crash and post-operation. Typically, their days as racers are carefully planned around riding, training and recovery and suddenly the switch to physical difficulties and a lack of mobility means a crushing contrast. For people so used to living life at a fast pace it feels like the brakes are clamped on at full velocity.

“There is a point where you think ‘I’ve done all the work, all the winter prep and all the races for nothing’,” says Herlings of the mental battle. “The end goal for me is always to win a championship and that was the hardest thing to deal with for this 2020 injury because, once again, I messed up due to a crash. The pain wasn’t so difficult this time. I did not have that much…and I knew I would heal up 100%. The real pain was messing up.”

“For me I think the boredom is worse,” claims Hofer. “At first you’re happy that the operation is done and the pain is either much less or it’s gone. When I broke the shoulder I was almost 24 hours in the hotel with just painkillers but as soon as I got to Austria I went straight to hospital and was in the hands of some great doctors and facilities. There is a relief to getting it fixed. But once you are home and you really cannot do anything then boredom sets in. If you can bring yourself to watch the races it even makes you pretty sad sometimes.”

“At first I really needed some time alone,” he adds. “Then I was watching TV and doing nothing. Once you can start moving or doing some rehab – even some training – then it is mentally easier to move on. You have too much time to think when you are injured…and you are thinking about the bad things. You have to do something as soon as it’s possible: go out with your friends, distract yourself. The worst thing you can do is sit there and think about motocross: it gets you down.”

Herlings has been able to get even more reflective. He missed large stretches of 2019 and is now again pushed away from the racetrack. When he’s on the KTM 450 SX-F he is a force of nature, but denied his all-encompassing ‘day job’ (something that he confessed had him existing like “a monk” in 2018 when he claimed 17 of 19 GPs) and he has had to learn about a new way of life. “I’m 26 now and motocross is part of your life for a certain amount of time,” he explains. “When I was a kid I didn’t think about anything apart from racing but the time off and stuff like the Coronavirus break gives you a moment to think about the years to come. We’re investing in things now, so I’ll still have income when I eventually stop. I still love racing and hopefully the foot will get back to the point where I can enjoy it again.”

Both racers are eying next year. Having a goal for various stages of their recovery is another part of being a professional athlete. It is a normal trait for the kind of person that is dedicated or even obsessed with bettering themselves. “I’ve been at the Red Bull Athletes performance centre in Salzburg doing my rehab for two months,” says Hofer. “I should be ready to ride again in December but we don’t know yet if we’ll get back on the bike straightaway or get the plates in my shoulder removed first. We’ll decide at the end of November. We’re firmly looking at 2021, so there is no hurry now and I can focus on my rehab properly.”

Channelling adrenaline and reaching new levels of performance in racing is just one challenge of being a top-level motocrosser; one good enough to ride for Red Bull KTM. There are many unseen aspects and uphill struggles away from their efforts on the bike. It can be in these moments when much is also ‘won’ or ‘lost’.

3 Responses to THE HURT GAME: RECOVERING IN MXGP