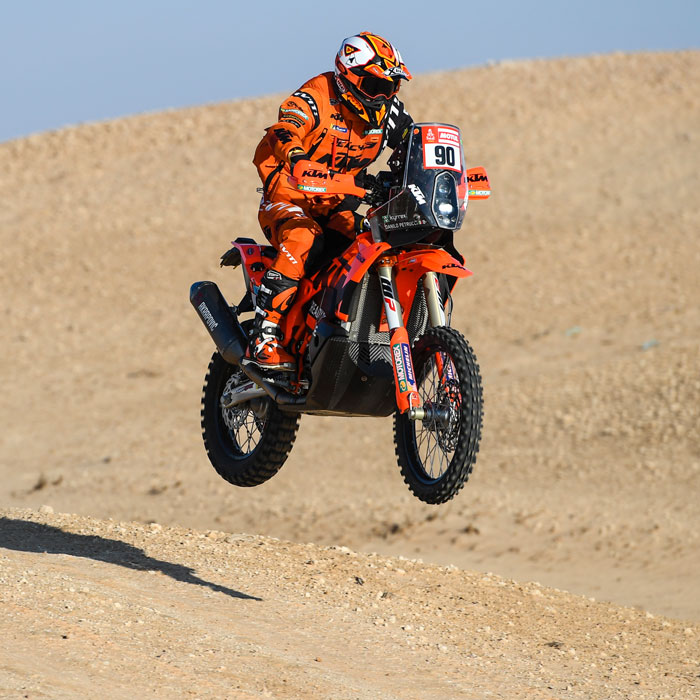 THE INCREDIBLE SURPRISES OF DAKAR

This year’s Dakar has already created many talking points and legendary tales that will be told for years to come as we head into today’s rest day in Riyadh. Danilo Petrucci is the man of the moment, having taken his first stage win – and many by surprise – just 53 days after hanging up his MotoGP™ leathers and embarking on what many thought would be a near impossible task for the Italian.

Petrucci’s entry to the Dakar, his first rally raid experience with real navigation, has been fraught with challenges – not least the little preparation time from first stepping on the bike in November, to concluding his MotoGP career, to arriving in the Middle East having also battled an ankle injury, to be prepared for one of the most notorious races in the world. A positive Covid-19 test on arrival had the KTM ace wondering if he’d even get the chance to compete in the 2022 edition of the event, before clearance from a blood test meant it was all systems go for the friendly Italian. The 31-year-old, who only began his road book training back in October with Jordi Viladoms, KTM’s Rally Sport Manager and former Dakar podium finisher, made a steady start, only to suffer with a small technical issue on stage two, which effectively concluded his competitive status in the main rankings.

Frustrating to say the least, but with the new rules, Danilo could continue the race as well as his Dakar experience and what a spectacle that has been – a third place on stage four (although it was revoked for a speeding penalty) and a prestigious stage win on stage five means that Danilo is not only the first racer to go from a MotoGP race season directly to the Dakar, but he’s also the first to have won a MotoGP race and a Dakar stage. The expectation was certainly nowhere near this impressive and historic feat the KTM star has achieved. A few crashes here and there have taught Danilo some of the hard lessons of rally, which is seemingly why most pictures in recent days show some bust up parts on his KTM 450 RALLY, but he’s enjoying the experience and determined to fulfil his original goal of reaching the finish on January 14th.

The Red Bull KTM Factory Racing team are aiming for their 19th Dakar victory and are making consistent progress with all three riders enjoying top three finishes in the opening stages and Matthias Walkner is in prime position heading into the rest day with second overall in the rankings. As with most rally racing, a top result can be a disadvantage the next day, as riders start ahead of their rivals and are tasked with leading the navigation – potentially giving their competitors an advantage to catch up. The game plan is on, and having reached the halfway point the team will be re-grouping and re-charging as much as possible to head out in full attack mode for the stages ahead.

Walkner’s consistency aboard the all-new KTM 450 RALLY puts him in a strong position, while Kevin Benavides and Toby Price are eighth and 12th in the general ranking respectively. Most of the timed special on stage six was cancelled due to safety concerns, but the pure variety of terrain from stony and rocky ground, to dust storms in the desert, difficult navigation in the first half of the Dakar have kept the competition hot and there’s everything to play for in week two – anything can happen in this 8,000km race, and with around 3950km left to go there’s a long way to the finish!

We’ve selected some of our favorite images from the first half of Dakar 2022 as excitement builds.

8 Responses to THE INCREDIBLE SURPRISES OF DAKAR