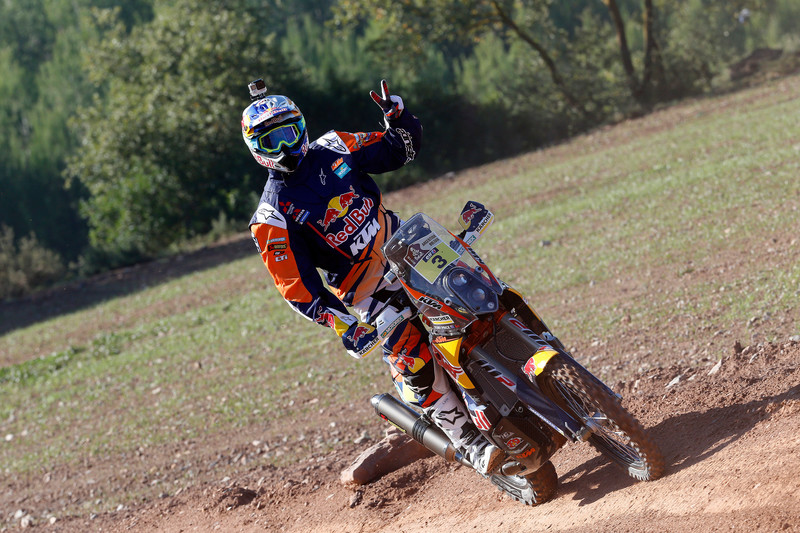 Delivering a stand-out performance during his debut Dakar appearance last January, in finishing third alongside Marc Coma and Paolo Goncalves Australia’s Toby Price showed that he’s got what it takes to be a top Rally racer. 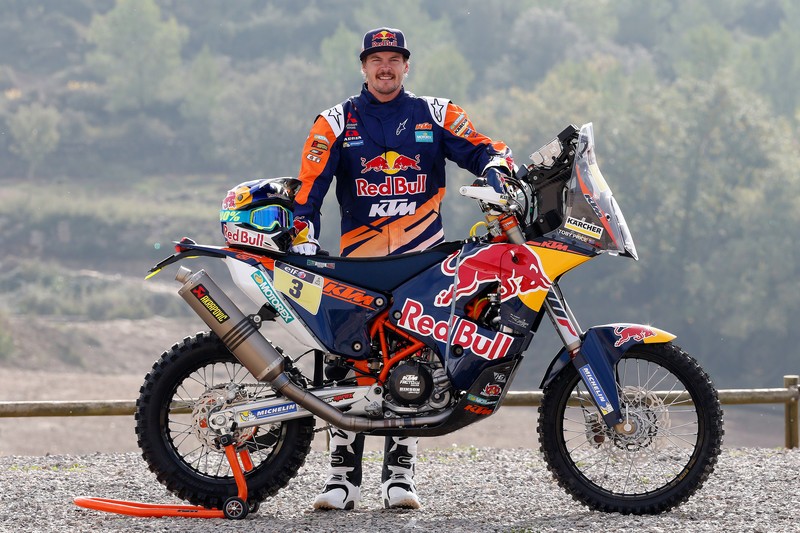 Growing up racing Motocross and then Enduro in Australia before going on to obtain global recognition as a hugely talented offroad racer, KTM sat down with the laid-back Aussie to find out more about growing up on a 43,000 acre farm, his injuries, doing his bit for charity and his goals as a full-time Rally competitor …

Toby, let’s jump back to the very beginning. How did you get involved in dirt bikes?
“Like most people it was my dad who got me into bikes. He taught me how to ride a bike when I was almost three years old. I grew up on a huge farm of 43,000 acres in New South Wales, Australia so I had all the space to go riding after school. My father was racing offroad buggies then. After winning an Australian championship he sold everything so we could focus on me racing Motocross.”

When and why did you make the switch from Motocross to Enduro?
“To be honest I started doing both Dirt Track and Motocross, as my dream was to follow in Mick Doohan’s footsteps. But I was a big kid so stayed in Motocross. At 16 I signed my first contract with Kawasaki. I had some good results but also a lot of injuries that hindered my career. So I got a full-time job at a construction company. In 2008 I came back to Motocross racing and did a whole year paying everything by myself. At the end of the season I was left broke. Then in 2009 Kawasaki offered me a deal to switch to Enduro. I had a good first season and ended up winning the Australian Offroad Championship. KTM Australia then gave me a place in their factory team in 2010. I’ve stayed with KTM since then.”

You’ve enjoyed a wealth of success racing offroad in Australia. Do you have any specific highlights?
“In the space of the last six years there’s been a lot of special moments to me. For some reason I’m good at winning titles first time out. I won the Finke and Hattah desert races, both on my first attempt. Since then I’ve won the Finke a total of four times and five times for Hattah. I also won the Australian Offroad Championship in my first attempt in 2009 for Kawasaki and then another four times for KTM. All these achievements are special to me but I always dreamt of competing with the best guys in the world at an international level.” 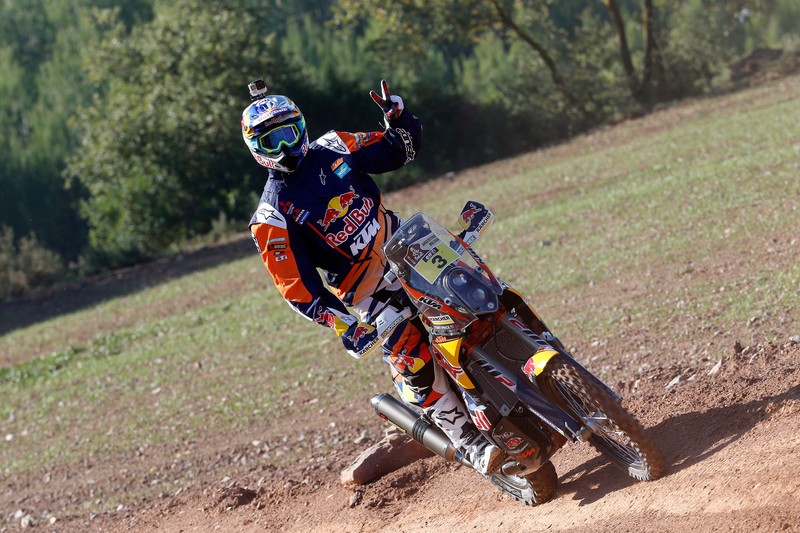 In 2014 you came close to claiming overall victory at the ISDE in Argentina. Is going one better and putting your name to the event something that’s important to you?
“I wanted to race internationally since I was a kid. I’ve done a few rounds of the Enduro World Championship but it didn’t work well. You only have three days to do it all and there’s not enough time to recover from the flight. But the ISDE, that’s a different story. My first time was the 2009 ISDE in Portugal where I ended up 14th outright. It was the best result from any Australian rider. I then had a couple of good events that led to the 2014 ISDE in Argentina. I got second outright there to Pela Renet. I’d definitely love to go back and try to claim the outright title. That fire is in me still. If I ever have an opportunity I’ll go for it.”

Like just about all racers you’ve had your fair share of injuries. Did breaking your back in 2013 change your outlook on racing?
“Injuries are the worst part of motorsports. My worst injury was definitely when I crashed during a Hare and Hound event in the US. I crashed hard and ended up breaking three vertebrae on my neck. Doctors said it was pretty much one in a million chance that I was able to walk. It was one of the few instances where I was reminded that no matter how good you are, everything can be taken away quick. That’s how it is and I’m grateful to be still doing what I love. When it comes to injuries you should see the positive side. They give you a bit of a break away from racing so you can get the drive to come back stronger.”

Just over one-year after getting injured you raced your first Dakar, finishing third. Was your podium result a surprise?
“Everything happens for a reason! All the good and the bad moments have brought me to where I’m at. The 2015 Dakar was definitely a surprise. Some days I wake up and have a hard time believing everything that happened last January. The decision to race was taken less than two months before the race. So I just set my goal to make it through the first day without getting lost. Then I had to worry about Day Two, Three, Four … If you think too much you risk getting an information overload. For people worldwide my third place result was a shock. It’s not very often you get a rookie do that. But desert racing is what I love to do and I’m more than happy I signed a two-year deal to continue my career with Red Bull KTM Rally Factory Racing Team. From now on I’m 100% focusing on Rally racing.” 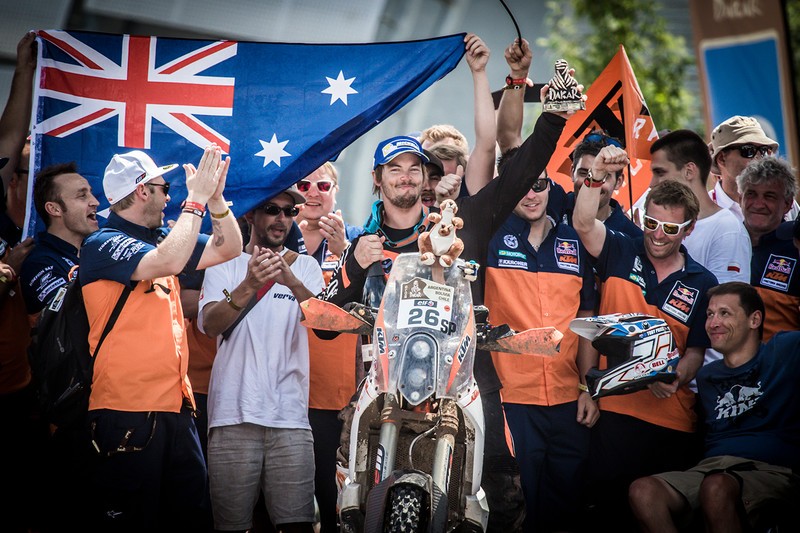 You have a busy travel and racing schedule, so what does Toby Price do during any downtime?
“As good as it is to travel around the world for me home is always Australia. People might think it’s like a holiday but this is my job and a business. As much as I love Dirt Bike racing it’s also good to get away from it all. When I’m back home I enjoy doing things with my mates, like jet skiing. We’re lucky in Australia to have the best beaches in the world and some of the best surfing. But when the time comes you’ve got to get down to business and work hard.”

Recently, you attended KTM Australia’s Ride4Kids event for children with cancer. Supporting these events must be important to you?
“It’s an extremely important part of my life. No matter how busy my schedule might be I’ll do my best to help out. At the latest KTM Ride4Kids event there were kids that got out of hospital just to be there. They were smiling and having a good time. Even for the kids that get through their chemotherapy, for me it feels like they’ve been robbed of their childhood. It’s good to be a part of causes like that.”

Finally, less than two weeks before the start of the 2016 Dakar. What are your expectations and goals ahead of the event?
“I’m really looking forward to Dakar. My main plan for 2016 is to finish the race. It worked for me last year and that’s going to be priority number one again. Last year we started off the first week trying to make it to the rest day. Then after the rest day we could start pushing a bit more. Everyone back home thinks that since I got to the podium in my debut ride I’ll smoke them in 2016, but it’s not that easy. I’m just going to take one thing at a time. It’s exciting to be part of the Red Bull KTM Rally Factory Racing Team. For me it’s like a big family so I’m sure we will enjoy our days in South America. We just need to triple-check everything, but other than that we’re READY TO RACE.” 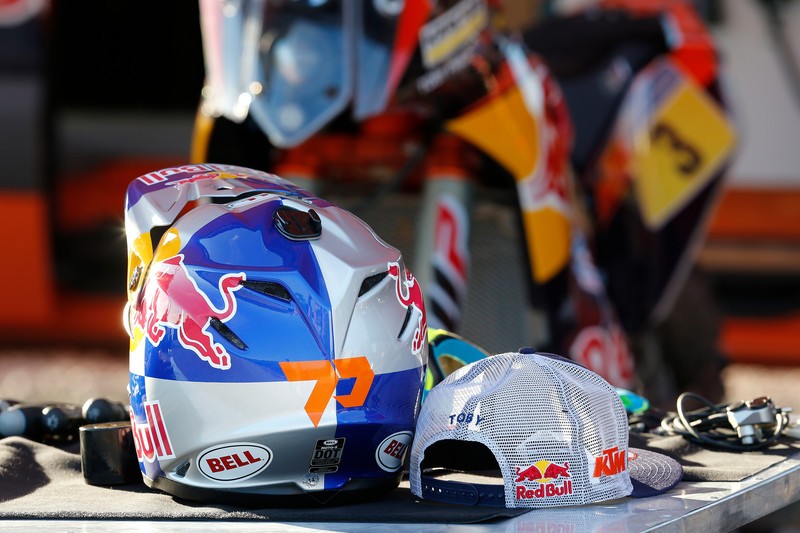