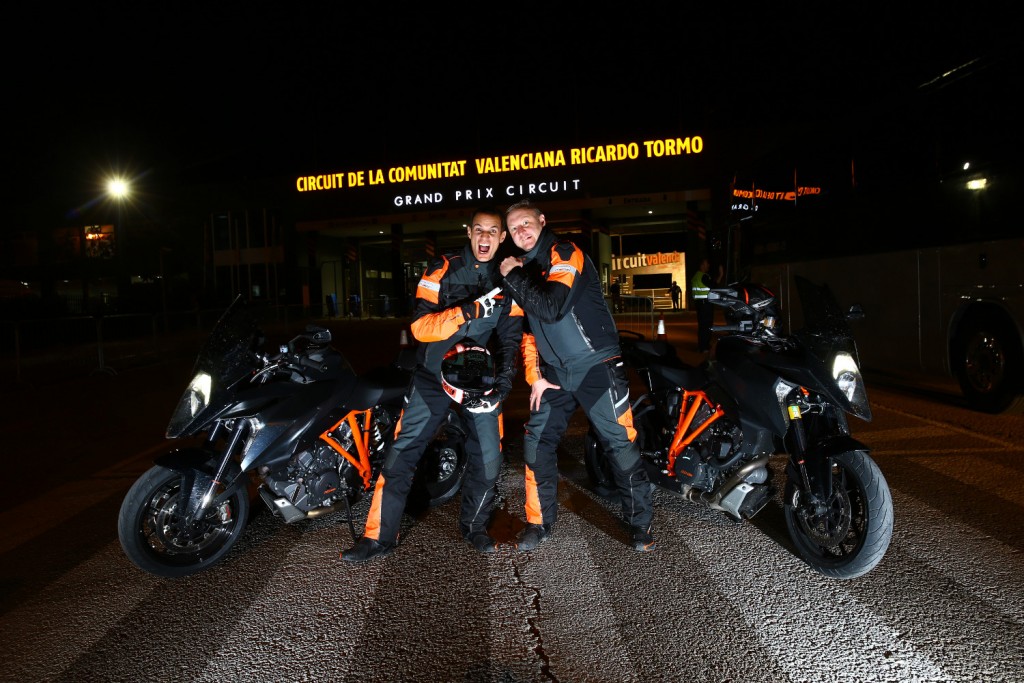 Two prototypes, two motivated, competitive drivers – one of whom has 2,000 km of experience on the road with MotoGP. Anyone can travel to Valencia by plane. 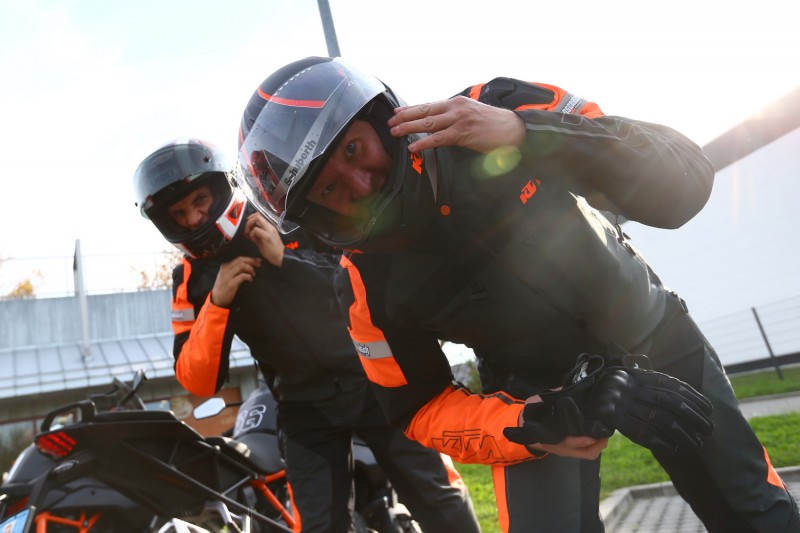 But traveling to the Province of Valencia from Upper Austria by motorbike sounds rather a good idea. Still, this road trip isn’t some leisurely sightseeing tour along the Côte d’Azur with countless cappuccino breaks; in the world of KTM, road trips mean speed. Estimated journey time to the MotoGP Finale: 36 hours. GT instead of Boeing. 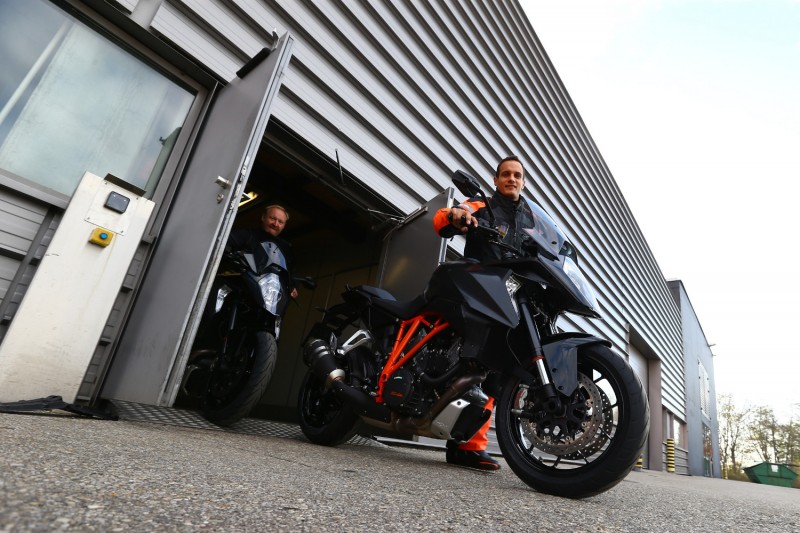 The brand-new KTM 1290 SUPER DUKE GT offers the ultimate road trip experience. Even though it still has pre-series status, the new “Beast” is enticing and full of endurance features. With a 23-liter tank, adjustable windshield, variable ergonomics, gear change assistant, and cruise control, the GT’s list of enhancements is irresistible and instantly makes the thought of sporty, long-distance journeys more appealing. 1960 km, November, challenge accepted. Off we go! You will soon find the perfect guides and someone’s slipstream to ride in. To keep MotoGP test rider Alex Hofmann from getting depressed this fall, the eloquent commentator will be setting the pace with his big heart for racing.

4th November, KTM factory, 9:21 am, 10 degrees Celsius, 0 kilometers
Both bikes provided by the development department are on the starting line, their tanks full and rear tires fresh.  The first few meters provided a perfect foretaste of the pure enjoyment offered by the nearly 2,000 kilometer trip. Here in Innviertel, the birthplace of every READY TO RACE bike, we face Germany and head towards the picturesque Burghausen, ready to tackle the first Autobahn leg head-on. The throttles are wide open. Nonsense, no jet plane could better that. 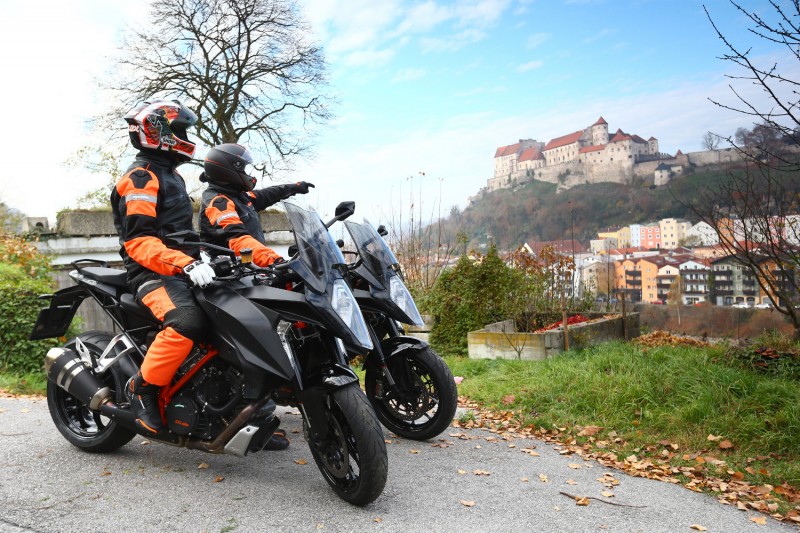 11:55 am, 12 degrees Celsius, 290 kilometers
First pit stop. According to the signs indicating the distance left to travel, we could have traveled another 60 kilometers. However, we had to let the photographer in our rental car go out of his way for a large coffee in Memmingen. As expected, Alex fearlessly keeps the 1301cc  twin bike moving forward and reports: “Traveling faster than 300 km/h on the RC16 is less thrilling than 280 on the GT.” Yes, it’s exactly as it sounds.
Chippy the photographer had barely breathlessly caught us up when Hofmann the professional reminded us to keep at it. So, get your toll stickers on and full speed ahead. In perfect weather past Lake Constance, we arrive in Switzerland around 1:00 pm. Even the SUPER DUKE GT has to stick to traffic laws. Discipline! 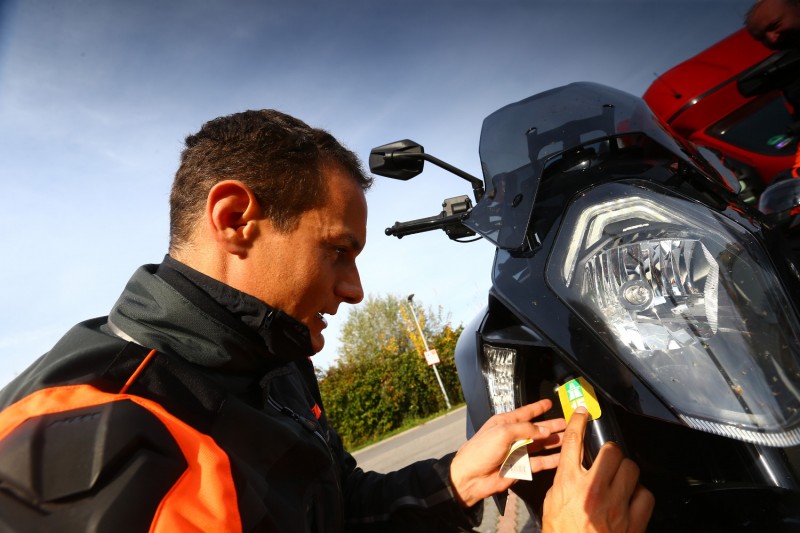 4:35 pm, 14 degrees Celsius, 630 kilometers
With Zürich behind us, we’ve conquered at least 600 km. We are both surprised our butts still aren’t sore. Even good tour bikes become a pain in the rear after a 7 hour trip. Up to now, our connection to the divine weather control center has worked perfectly; the first third on consistently dry track has still not tested the traction control or antilock brake system for inclines. At sunset, with Lake Geneva in sight, I’m optimistic that Alex is already sitting in the Eurosport recording booth. But while the classic motorcycle tourist is now looking for a beautiful Auberge, we focus on the road south in the mist on the horizon. Turn the grip heating on and give it some gas. France here we come! 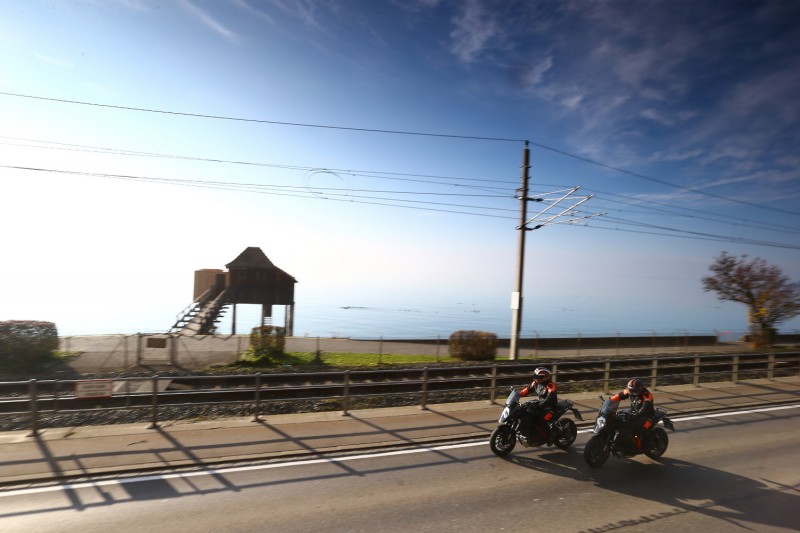 Orange, 11:25 pm, 8 degrees Celsius, 1095 kilometers
Traveling at 150 km/h, the last hours have flown by. Just a quick stop to put on our scarves and set the grip heating to maximum then we are ready to roll. In the deep south of France, we finally leave the turnpike and roll into Orange as the town is already fast asleep. The town sign offers the perfect backdrop for the last photo of the day. 14 more hours and we’ll call it a day! My last thought: My butt still doesn’t hurt. 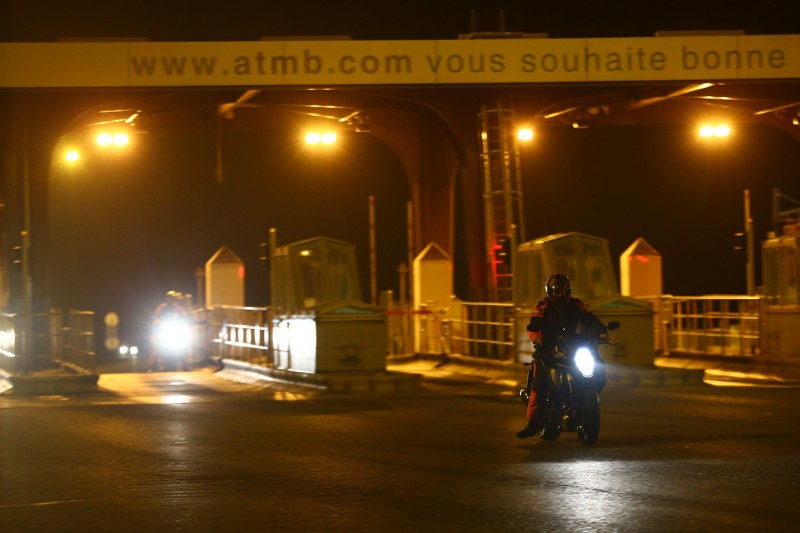 5th November, 7:15 am, 10 degrees Celsius, still 1095 kilometers to go
Our Fast-Forward Travel Group is barely on the road south again as the first rays of sunlight break through the morning haze. And just 10 minutes later, the GTs surf the torque wave in perfect weather. All thanks to the man upstairs. Even the photographer is happy. Chippy jumps out of his hopeless, underpowered rental car and mounts his camera with a stabilizer on the car’s exterior. It’s showtime! 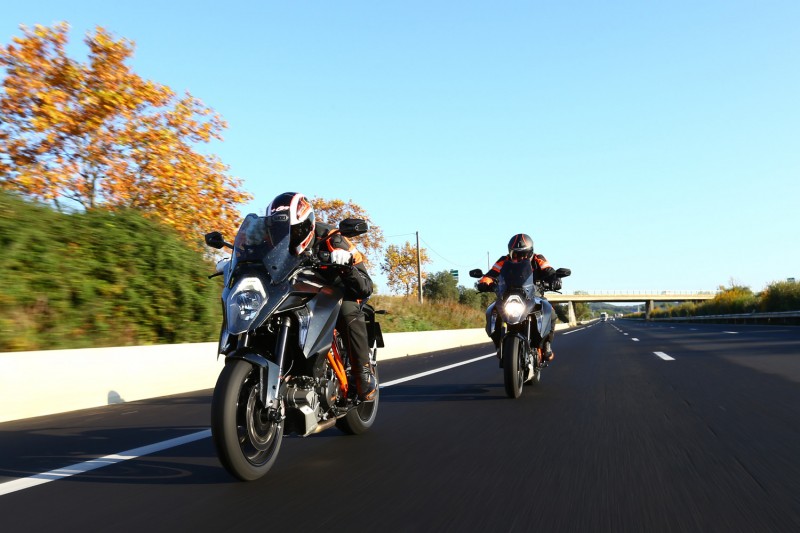 11:20 am, 18 degrees Celsius and sunny, 1390 kilometers
Viva España. Welcome to the land of motorcycle sports. The second home for all professional bikers receives us with superb conditions. Hopefully, Alex knows the difference between dream and reality and doesn’t switch to qualifying mode … Vrooom … 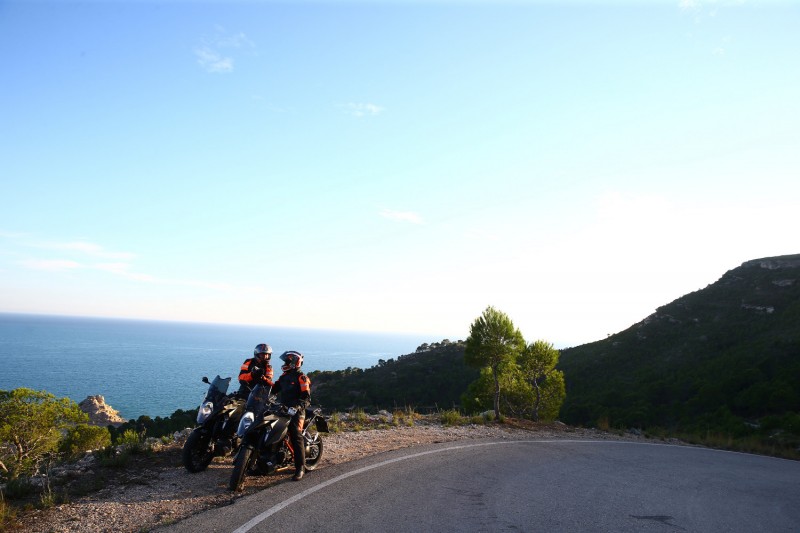 1:57 pm, 20 degrees Celsius and sunny, 1696 kilometers
Siesta. After nearly 1,700 kilometers it must be time. It’s hard to believe that just 30 hours ago we were stood in front of the factory door in Mattighofen. Now both Express Sports Tourers have reached the harbor boardwalk in Taragona. Amazingly, the entire Spanish leg of our trip runs alongside the water. But there is not much time to take in the sights. “Helmets on”, shouts the commando. Chop, chop … we have set ourselves the goal of savoring the amazing curves on the final leg along the coast.  And just a little later, the GT proves to be a pure formula SUPER DUKE. Alex, who has switched off all the electronic assistance, shouts out how much fun it is. We zoom over twisted narrow asphalt in the intoxicating sunset. Brakes adapted for racing and the indescribably nostalgic engine work like drugs, allowing the body and spirit to experience the pure sport, leading to GT addiction. The exhilaration comes to an end before nightfall despite the adaptive headlights. Then back on the Autopista, only another 150 km to go. 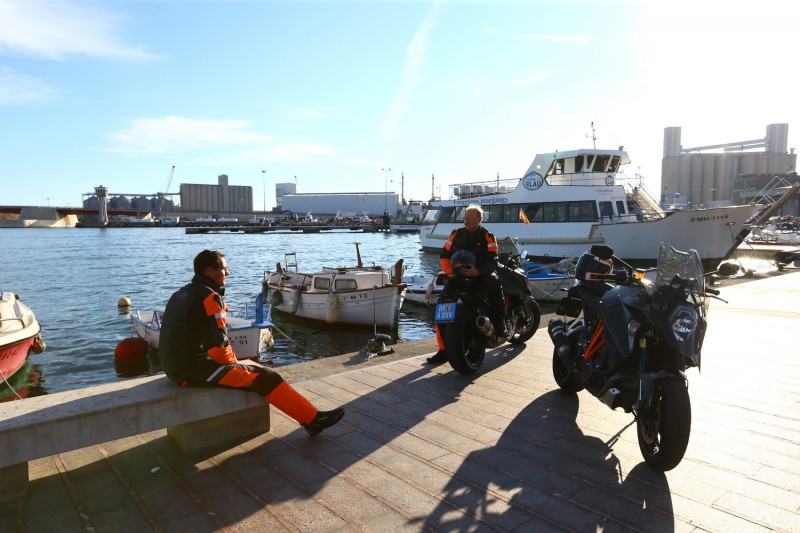 Circuito Ricardo Tormo, 7:05 pm, 19 degrees Celsius, 1960 kilometers
The final stop on the race track is once again the gas station. But this time it’s not gas we’re refueling with, it’s beer. Three rewarding ice-cold beers are slipped under our jackets in front of the paddock door. Behind the barrier, GP beasts lurk in three classes to defeat their opponent on Sunday in a 100-kilometer chase. Ha, the “Factory SUPER DUKE GT” team with the Hofmann/Kuttruf duo has just completed the entire racing season in one piece. Alex parks his GT in the paddock right near an exquisitely-primed KTM 1290 SUPER DUKE R, from which he will commentate everything on the route on Friday. Mission accomplished.

Mr. Hofmann, it was a pleasure not flying with you! 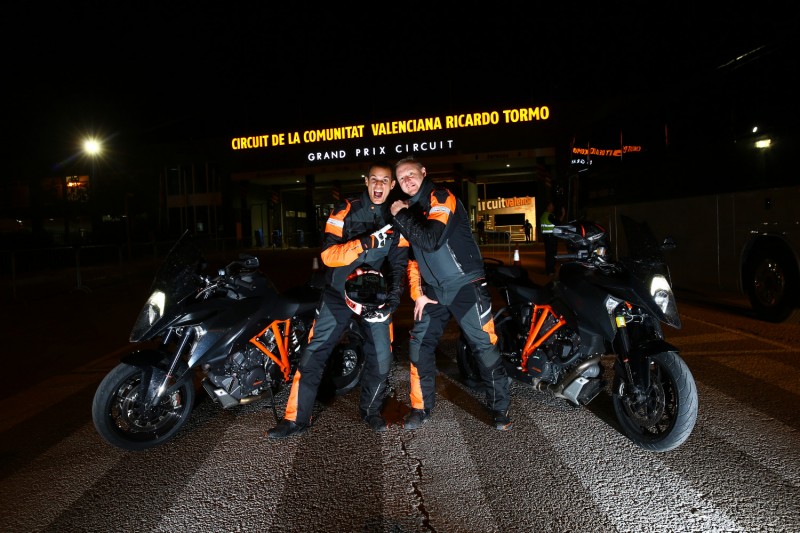 The detailed travelog can be found at full length with even more pictures in the new UNBOUND issue – KTM´s lifestyle magaine – that will be available at KTM dealers in spring 2016.