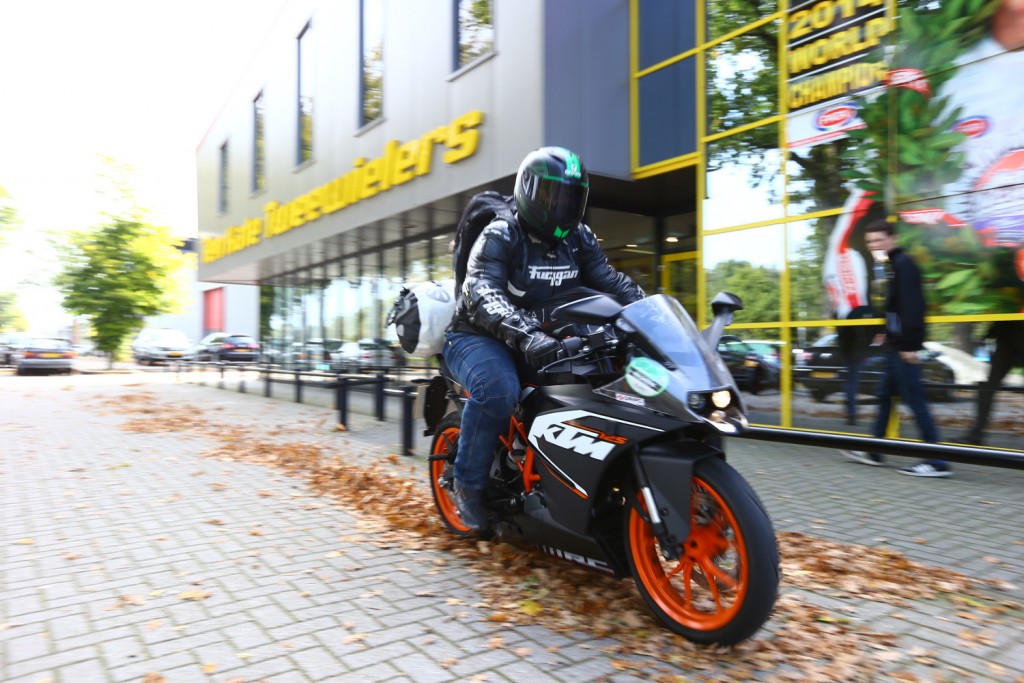 Motorcycle News’s British Superbike reporter, Simon Patterson, rides 1200km from England to the ‘Cathedral of Motorcycling’ that is Assen.

When you live in the Midlands of England, continental Europe seems awfully far away – especially when it is not just a hop across the Channel to France, but a half decent length trip to northern Holland you’re planning.

So you can imagine that when I announced in the MCN office that I was thinking about heading to the Assen round of the MCE British Superbike series on a 125cc bike, it was met by a little bit of incredulity by my colleagues. When I told them I wanted to go the ‘long’ way – down to Dover and up through France – instead of hopping on a ferry straight to Rotterdam, I think it might have confirmed their suspicions that I’m a little nuts …

But if there’s two things that the trip showed, it’s that Europe really isn’t as far away as you think – and that doing some touring abroad on a bike like the KTM RC 125 really isn’t as big an ask as you’d first think. Picking out a route that would take me through four countries, from England to France on the Eurotunnel, then up through Belgium and Holland to Assen, I really enjoyed the run – and was mightily impressed by the KTM, too!

Jumping on the supersport bike from my base in Peterborough for the three-hour ride down to Dover, I was immediately impressed by how spacious the bike is. I’ve ridden quite a few 125 sports bikes, and they tend to be cramped little things. I don’t know if it’s that the RC 125 shares a base with the RC 390, but it doesn’t feel like a 125. No leg cramps and no sore wrists – the usual vices of lots of motorway riding on a small bike. 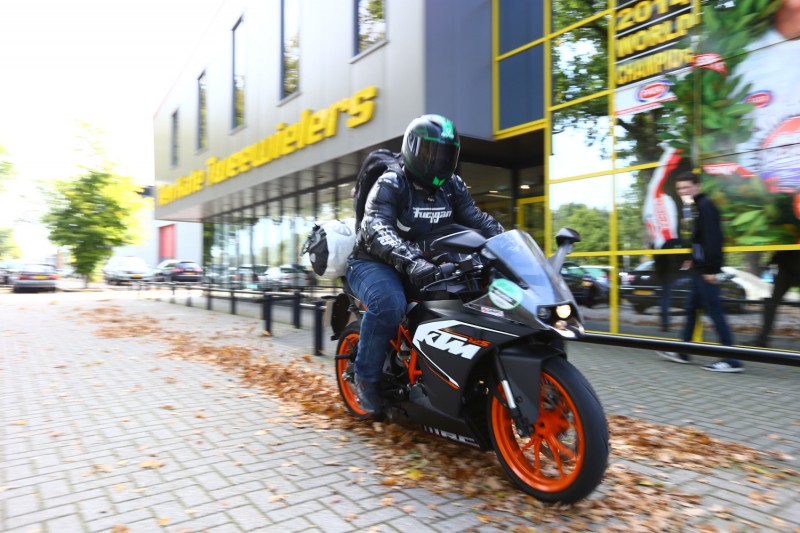 The only comfort problem, in fact, was the seat – let’s just say that if I were doing the trip again I’d try and get hold of one of KTM’s PowerParts Ergo Seat! The foam-moulded pillion seat is ultra comfy, though, and if you’re on the motorway you can just get yourself seated on it to stretch the legs!

With the first stretch of the run done and across in the tunnel train to France, it was a short hop in the dark up to Aalter, 130km and an hour and a half or so away. I had an early start planned from there, with the longest stint on the bike planned for the next day – 400km and about four hours, mainly on motorways.

Despite that, though, I had learned the evening before that the not so little KTM will lap up motorway miles. You might think that a bike with only 14bhp would struggle, but it never did. Happy to cruise at 130kph, it just takes a little bit of time to get there sometimes (especially with a big lad on board) – but it’s less of an issue on the motorways than on single-carriageway roads where sometimes you can struggle to get past trucks. 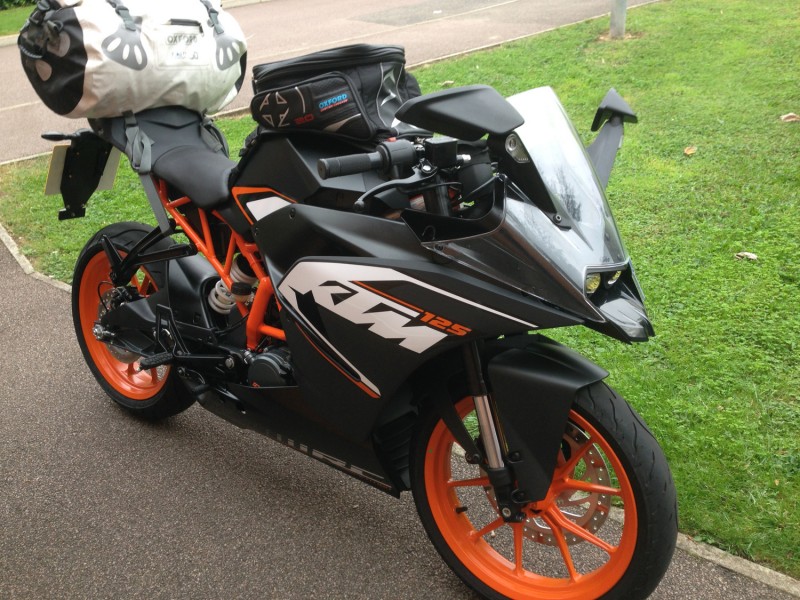 There’s a major benefit to touring on a 125, too, that more than makes up for any power issues. Consumption figures of around 90mpg means well over 300km on a ten-litre tank of fuel – less stops and a very low cost trip!

That’s not to say that the frugal bike isn’t fun when it wants to be though – and I even managed to sneak in a few laps of the famous Dutch TT circuit while I was there. Trust me, there’s nothing more fun than dicing with people on 1000cc superbikes on a track when you’re on a 125 – they might have ten times the power, but when you know the circuit and have just as much corner speed on a sweet handling bike, it’s great! 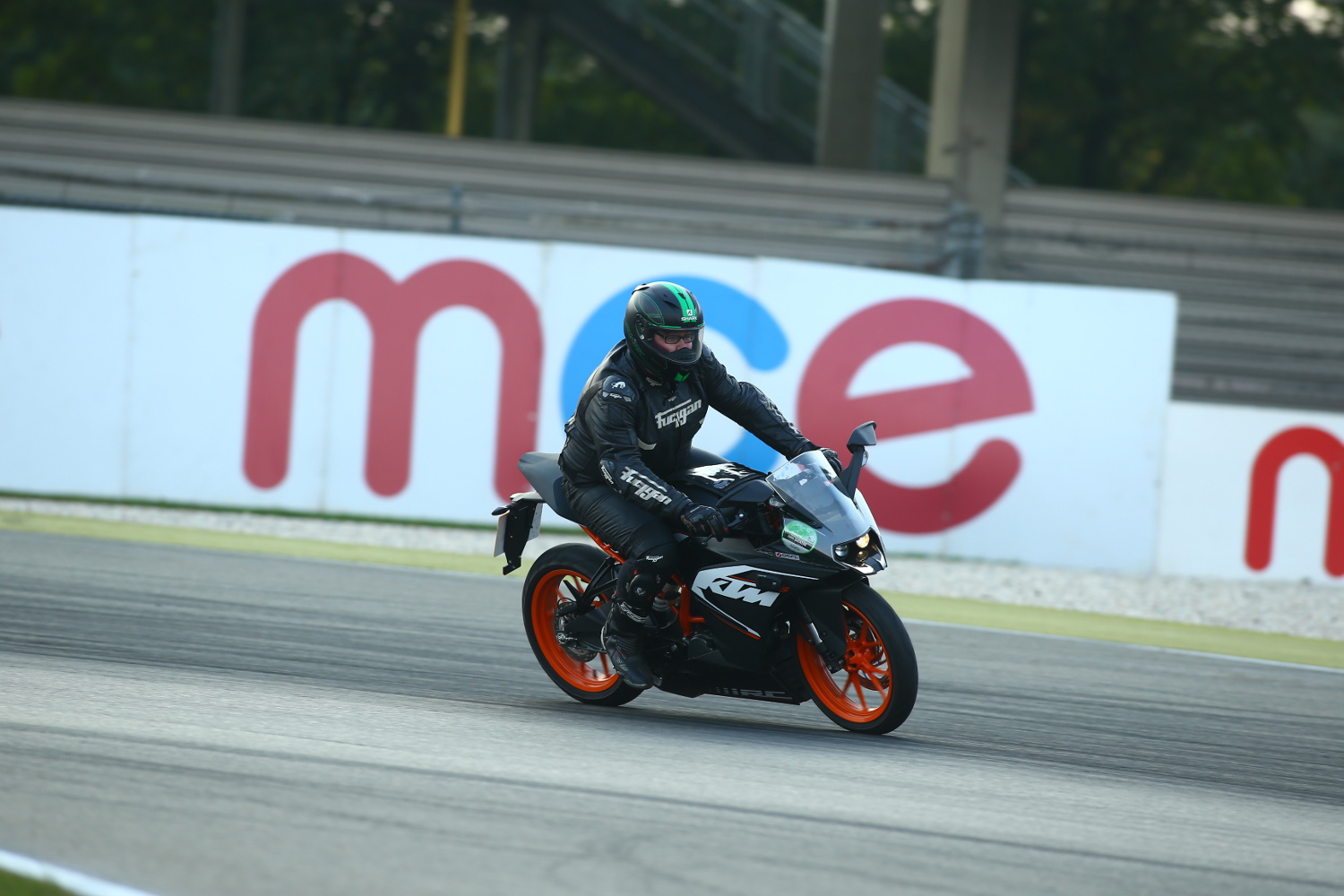 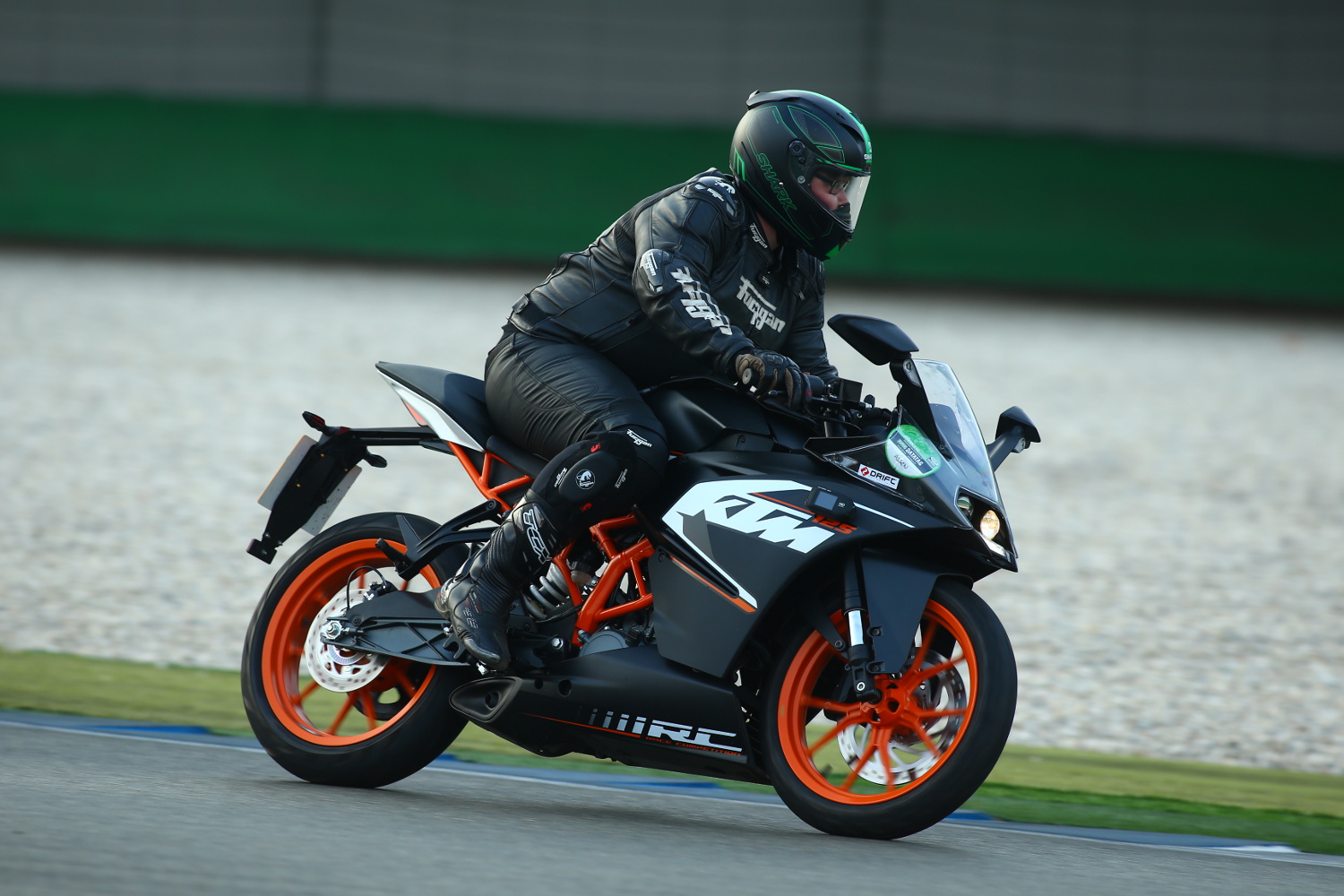 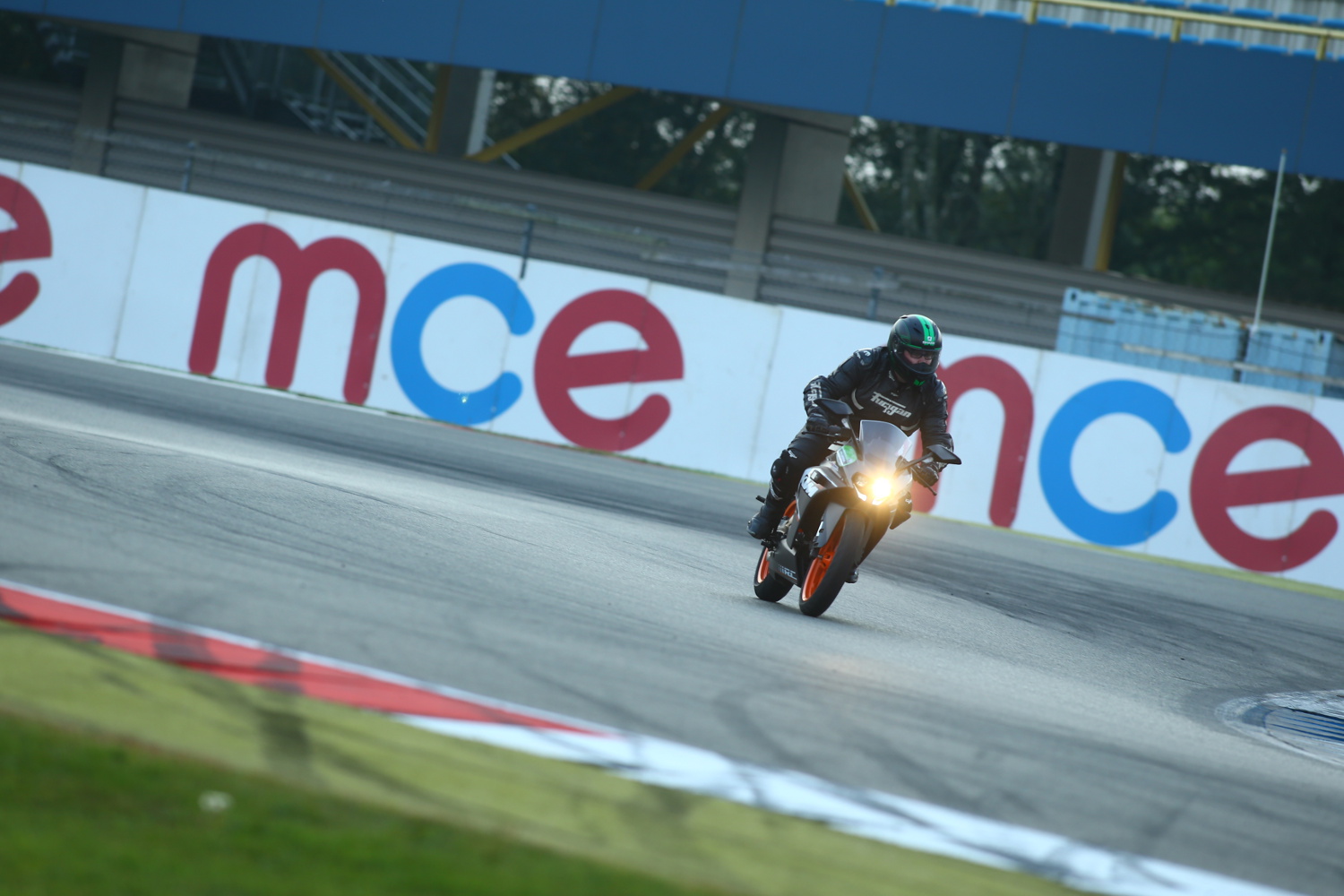 I tested that out on the way back, too, taking the shorter route home (the ferry from Hoek of Holland to Hawich halves the riding time on the continent) so that I could have some playtime. Taking the back roads instead of the motorways as I headed south again, it confirmed what anyone who’s rode a KTM RC 125 before already knew – they’re just as easy to have fun on through twisties as a superbike!

Despite its reputation as flat and dull, there are some great roads through the Netherlands, as well as scenic sights, windmills (so many windmills!) and some of the most friendly and welcoming people you’ll ever meet.

For British riders, as a first taste of taking a bike abroad it is a brilliant way to dip your toes in the water. And doing it on a small capacity bike? There’s nothing to stop you! It’ll be a cheap trip (the Eurotunnel is only £75 return), there’s a mountain of stuff to see and do, and the KTM RC 125 handled it without a problem. In fact, it sort of makes me question the need taking a bigger bike at all. Just as comfortable (if not more so), ultra-cheap to run, and let’s be honest – not as likely to cost you a huge speeding fine. Would I do it all over again? In a heartbeat. But the next trip for the 125 has to be another TT course – the Isle of Man. Where do I sign up?!